Next week, the leaders of the world’s two largest democracies will try to highlight their areas of agreement—but the trendlines show growing cracks.

U.S. President Donald Trump lands in New Delhi early next week to meet his Indian counterpart, Prime Minister Narendra Modi. International media is almost certain to focus on a growing friendship between the world’s two largest democracies. Former U.S. President Barack Obama predicted the two would form a “defining partnership” of the 21st century, and advancing ties with India is one of the few areas of bipartisan agreement in Washington. A broad consensus of foreign-policy thinkers view an India-U.S. relationship as a hedge against the rise of China.

TV channels and newspapers—especially in India—are likely to devote a considerable amount of coverage to a joint appearance in Ahmedabad, where Trump and Modi will address an expected 100,000 people at the world’s biggest cricket stadium. The glitzy optics of that event will prompt analysis about the budding personal chemistry between the two leaders—how both are men of the people who share a disdain for the media.

But media coverage will miss the mark. The more substantive issues lie in the growing differences between the two countries and their leaders.

First of all, Trump and Modi actually aren’t that similar, as the Wall Street Journal’s Sadanand Dhume writes. Unlike Modi, Trump has an elite background. While Trump may rant against the American elite just as Modi criticizes India’s, a key difference is that the American superrich far outnumbers India’s. U.S. institutions are stronger than those in India. And not surprisingly, popular and media opposition to Trump is robust. In India, Modi remains widely popular and enjoys a largely adoring media.

More substantially, despite about two decades of moving closer, India and the United States have begun to show signs of divergence on at least two key issues.

As Foreign Policy’s Keith Johnson writes, “Trump’s niggling trade demands” are holding the larger strategic relationship hostage. As U.S. officials focus only on limiting their trade deficits with partners—browbeating over walnuts and Harley-Davidsons with India—Washington is ill-suited to push New Delhi toward more broadly trade-friendly policies, as it has in the past.

As with trade, so too with foreign policy. Washington’s shunning of liberal alliances has opened the door for New Delhi’s increasingly muscular geopolitics. At the Munich Security Conference over the weekend, U.S. Sen. Lindsey Graham chided India over its relationship with Pakistan and its unilateral decision to scrap Indian-administered Kashmir’s autonomy last year. “I don’t know how it ends, but let’s make sure that two democracies will end it differently,” he said. Indian Foreign Minister Subrahmanyam Jaishankar, who shared the stage with Graham, immediately quipped back: “Don’t worry, senator. One democracy will settle it. And you know which one.”

While India has long made clear that it views Kashmir as a domestic matter, shunning U.S. involvement, Jaishankar’s comments and statements from other top officials highlight a growing confidence in New Delhi—and a sharp decline in Washington’s influence. In the Trump era, the India-U.S. partnership has hardly been “defining.” It has served mainly to advance Trump’s most pressing concerns in any given moment. New Delhi is responding accordingly.

More on the Trump-Modi summit in next week’s edition of South Asia Brief. For now, amid the onslaught of media commentary, know that much of what you will see is about optics. And that hides growing cracks and frustrations in a relationship for which many had greater hopes.

Afghanistan’s future. After months of delay, Afghanistan’s election chief declared President Ashraf Ghani the winner of last September’s election, giving him a second term in power. A spokesman for rival Abdullah Abdullah, who was declared runner-up, has already disputed the results as having “no legitimacy,” alleging fraud. While Afghanistan has a population of 37 million, only 1.82 million votes were counted—with nearly 1 million thrown out because of irregularities.

Over the weekend, the United States and the Taliban agreed to a seven-day reduction in violence. U.S. Defense Secretary Mark Esper has described the start of the truce as a “moving date.” If both parties stick to the reduction in hostilities, it could be followed by a peace deal between the United States and the Taliban—potentially to be signed while Trump is in the region next week for his meeting with Modi.

Women in India’s army. Despite opposition from India’s government, its top court has ruled that female army officers should have parity with their male counterparts, a move that will allow them to hold commanding positions and access to equal promotions, benefits, and pensions. The government argued that “the troops are not yet mentally schooled to accept women officers in command.” The Supreme Court rejected that theory, saying that citing “social norms to deny opportunity to women officers is disturbing and cannot be accepted.”

Sri Lanka sanctions. Last Friday, U.S. Secretary of State Mike Pompeo announced sanctions against Sri Lankan Lt. Gen. Shavendra Silva, the country’s army chief, who is barred from entering the United States “due to his involvement in extrajudicial killings”—alleged war crimes committed during the end stages of the country’s civil war in 2009. The travel ban marks the first time any major figure involved in the deaths of as many as 70,000 Tamil civilians in a no-fire zone has been held to account on the global stage. Read the complete public designation.

On Sunday, a Nepal Airlines flight evacuated 175 Nepali nationals—mostly students—from Wuhan, China, the epicenter of the coronavirus outbreak. Nepal will keep the evacuees under quarantine for two weeks.

Nepal’s economy is more dependent on remittances than any other South Asian country. Our question: What percentage of Nepal’s GDP comes from personal remittances?

India vs. Vodafone. India’s Supreme Court has issued a ruling that could have dramatic consequences for the country’s economy. On Friday, the top court ordered Vodafone Idea, a joint venture between Britain’s Vodafone and India’s Idea Cellular, to pay $7 billion in retrospective license and spectrum fees. Vodafone Idea’s shares plunged on the news of the ruling: The cellular provider has said in the past that it would go bankrupt if forced to pay up.

Vodafone Idea has 13,000 employees, and, analysts say, its default could increase India’s fiscal deficit by 40 basis points. India’s reputation as a country that levies retrospective taxation will keep scaring off potential investors and could jeopardize economic growth.

Pakistan’s new social media rules. Last month, Pakistan’s cabinet approved a set of regulations that would force social media companies to hand over data to the government and to remove content it deems unlawful. While the new rules were not made public, Reuters accessed a copy of the document. It shows that the rules could give Islamabad unprecedented power to censor dissent and free speech. 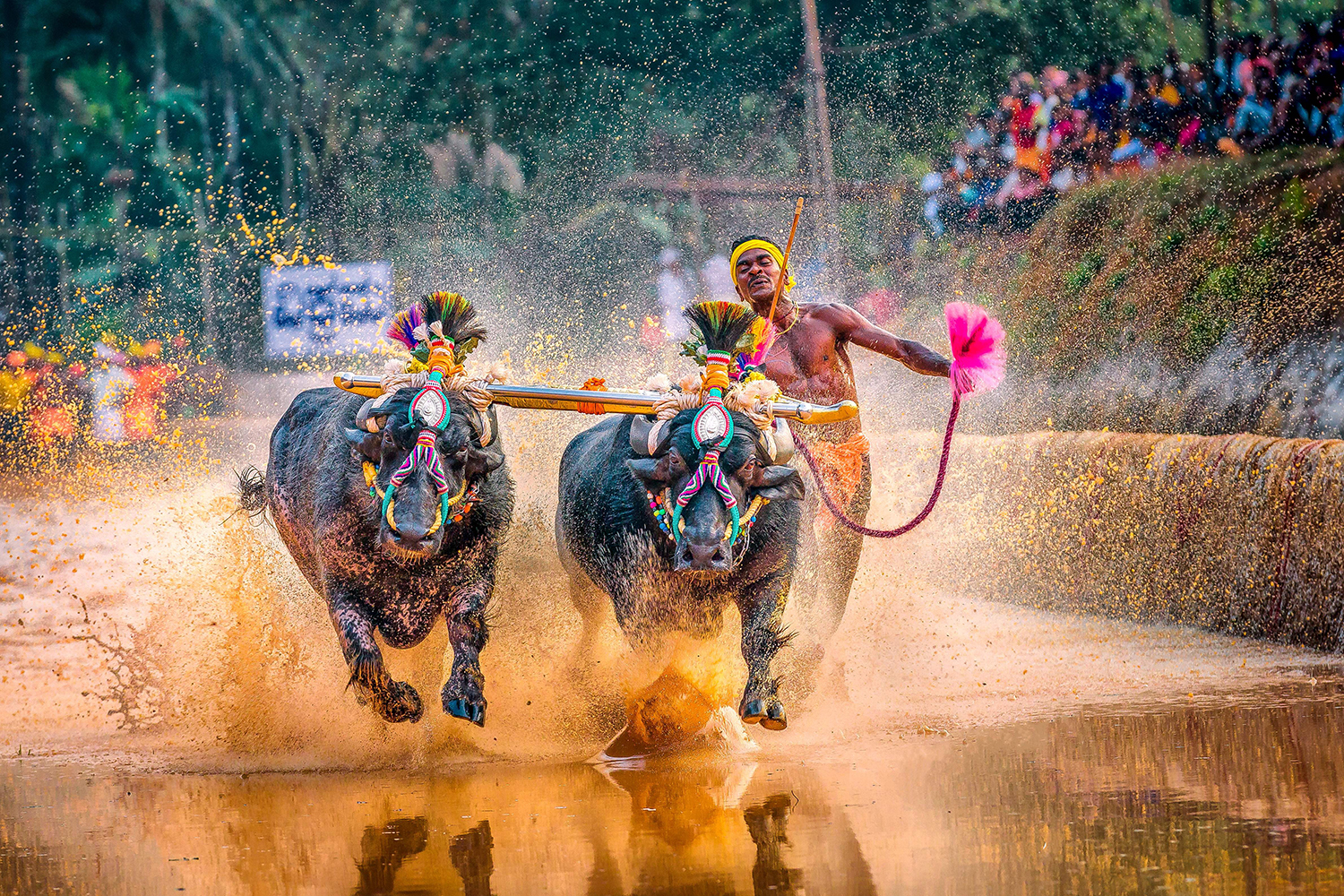 Buffalo Bolt? Here’s a fun one. Last week, videos of 28-year-old Srinivas Gowda, an Indian buffalo racer, went viral because he ran 142 meters—along with two buffalos—in 13.42 seconds. Gowda was taking part in Kambala, an annual race staged with buffalo in paddy fields in the southern state of Karnataka. The video led people to compare Gowda to the Jamaican sprinter Usain Bolt—and for India’s sports minister to offer him a chance to join India’s national sprint trials. For now, Gowda says, his focus is on Kambala.

As shown below, in 2001 Nepal’s economic reliance on remittances jumped sharply from less than 3 percent to more than three times that amount. It rose steadily every year afterward before dropping a bit over the last three years. According to 2018 World Bank data, personal remittances now account for 27.77 percent of Nepal’s GDP—far more than any other South Asian country.