The U.S. ambassador to Germany will mix his policy duties with a supposedly apolitical senior intelligence post.

Welcome to Foreign Policy’s Security Brief. What’s on tap today: Trump’s ambassador to Berlin is tapped as the acting head of national intelligence, Syria’s humanitarian crisis reaches unprecedented levels, and what to make of the movement on peace talks in Afghanistan.

As you may have noticed, Security Brief is now delivered on Thursdays. We’ve added an expanded section on industry moves and upcoming events to enhance your newsletter experience.

Welcome to Foreign Policy’s Security Brief. What’s on tap today: Trump’s ambassador to Berlin is tapped as the acting head of national intelligence, Syria’s humanitarian crisis reaches unprecedented levels, and what to make of the movement on peace talks in Afghanistan.

As you may have noticed, Security Brief is now delivered on Thursdays. We’ve added an expanded section on industry moves and upcoming events to enhance your newsletter experience.

Premium and FP Insider subscribers can also now get email alerts as soon as FP publishes defense and security news. You can sign up here. (You must be logged into your ForeignPolicy.com account to activate your alerts).

Dan Haverty contributed to this report.

That decision mixes his political job in Berlin with a senior intelligence post that is supposed to be apolitical—something that is vexing former State Department and intelligence officials. Last year Trump also appointed Grenell as special envoy to the Serbia-Kosovo peace process. The State Department didn’t respond to request for comment on whether he’ll keep his special envoy role, but it’s not clear how Grenell can carry out the day-to-day tasks of two, let alone three, jobs at once. There are only so many hours in a day.

Politicizing intelligence. Sen. Mark Warner of Virginia, the top Democrat on the Senate Intelligence Committee, said Trump was shirking his constitutional duties by appointing an acting intelligence chief instead of nominating a full-fledged chief, which requires senate confirmation.

“[A]t a time when the integrity and independence of the Department of Justice has been called into grave question, now more than ever our country needs a Senate-confirmed intelligence director who will provide the best intelligence and analysis, regardless of whether or not it’s expedient for the President who has appointed him,” Warner said in a statement.

White House response. White House Press Secretary Stephanie Grisham said Grenell is “committed to a non-political, non-partisan approach as head of the intelligence community.” She added that Trump “has every confidence that Ambassador Grenell will perform his new duties with distinction.”

Syria crisis by the numbers. After nearly a decade of war, it might be easy to become inured to the humanitarian crisis in Syria. But fighting around Idlib, the country’s last rebel stronghold, has pushed the crisis to unprecedented levels. Nearly 1 million civilians are caught between the Turkish border and advancing Russian and Syrian forces. Here’s a glimpse into the crisis, from U.N. figures. 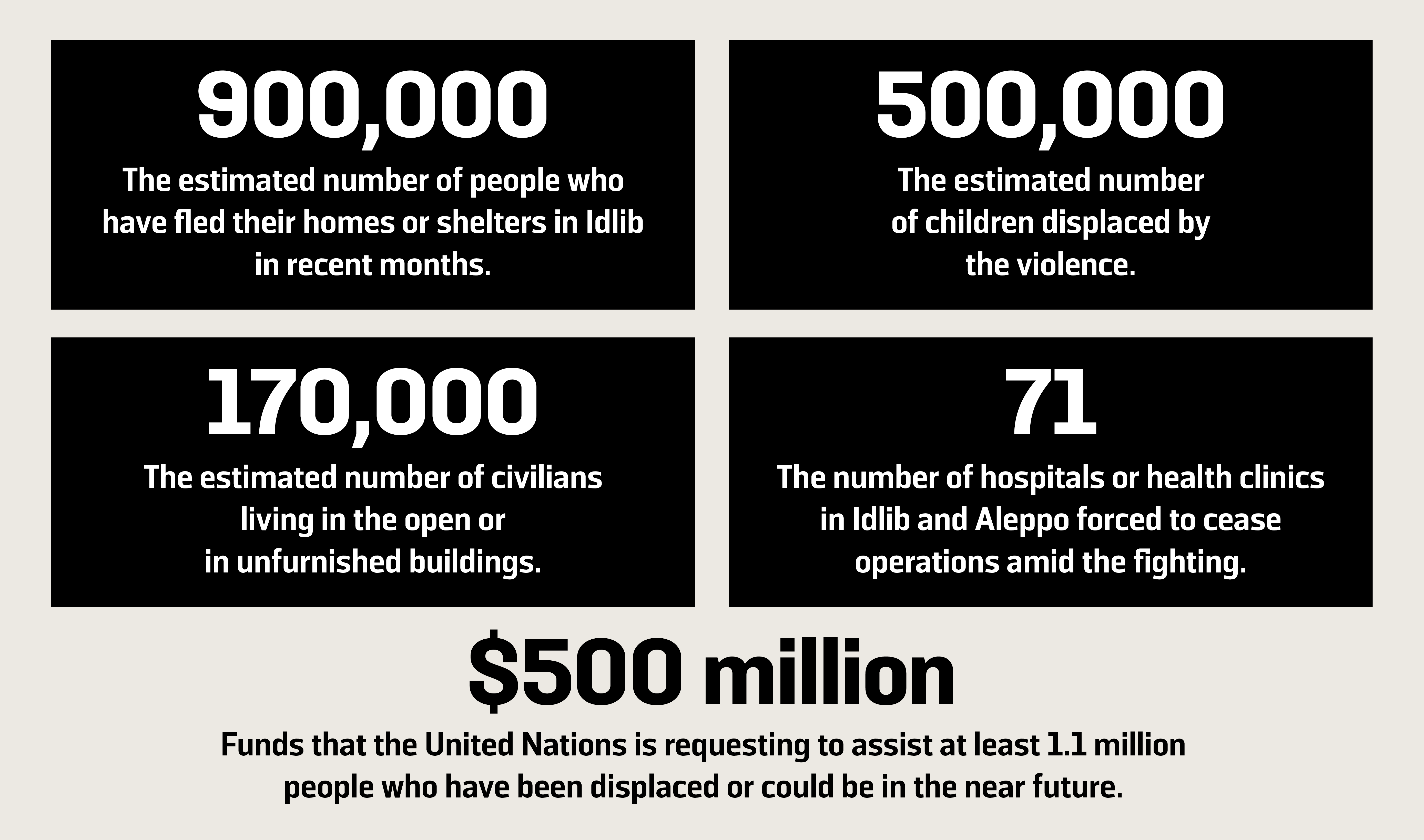 What the Taliban wants. Sirajuddin Haqqani, the deputy leader of the Taliban, published a New York Times op-ed today, writing that the Taliban is ready to work with international partners on a long-term peace-building plan. He repeated the demand of fully withdrawing foreign troops first. Mujib Mashal, the New York Times Afghanistan correspondent, offered his thoughts:

“The piece by Siraj Haqqani in @nytopinion – which’s independent of our news operations & judgment – omits the most fundamental fact: that Siraj is no Taliban peace-maker as he paints himself, that he’s behind some of most ruthless attacks of this war with many civilian lives lost,” Mashal tweeted.

Libya peace talks breakdown. Talks between Libya’s internationally recognized Government of National Accord (GNA) and the Libyan National Army led by Gen. Khalifa Haftar appear to be breaking down after the GNA announced it would no longer participate in U.N.-brokered peace talks in Geneva next Wednesday. The GNA’s decision came in response to a rocket attack on Tripoli by forces loyal to Haftar. Tripoli is one of the GNA’s few remaining strongholds, but it has been under siege for almost a year.

Oversight SNAFU. The U.S. government failed to account for $715.8 million in weapons and equipment allocated to its Syrian partners in the fight against the Islamic State, according to a new report from the Pentagon’s watchdog. Lax standards for monitoring equipment left thousands of weapons “vulnerable to loss or theft,” Task and Purpose reports.

Another Pentagon ouster. John Rood, the Pentagon’s top policy official, is being forced out of his job at the end of the month amid a loss in confidence from the White House, FP’s Lara Seligman reports. Rood approved U.S. military aid to Ukraine before the White House ordered it to be held up last year, a point at the center of Trump’s impeachment trial. He also faced accusations of creating a hostile work environment. Rood will be replaced in an acting capacity by acting Deputy Under Secretary of Defense for Policy James Anderson.

NSC move amid anonymous rumors. Deputy National Security Advisor Victoria Coates is leaving her post to become a senior advisor at the Department of Energy. It comes after Coates and the White House batted away an unsubstantiated whisper campaign that she was the author of an anonymous New York Times op-ed and book outlining a secret resistance campaign in the Trump administration.

Russia ramps up disinformation in Africa. Africa is increasingly becoming the target of Russian-linked disinformation campaigns, a new group of researchers has uncovered. Read more here, from the African Center for Strategic Studies.

Parliamentary elections in Iran. On Friday, Iran goes to the polls to vote for 290 members of the Islamic Consultative Assembly, the country’s national legislature. The parliamentary elections are the first since anti-government protests broke out late last year. Low turnout could deliver sweeping gains for hardliners, who would restrict the moderate program of President Hassan Rouhani.

DoD Budget 2021 hearing. U.S. Defense Secretary Mark Esper and Chairman of the Joint Chiefs of Staff General Mark Milley will speak before the U.S. House Armed Services Committee about the details of the Defense Department’s fiscal year 2021 budget request next Wednesday. The budget request totals $705 billion, a drop in about $13 billion from last year, but includes significant commitments to space and cybersecurity.

Pompeo in Oman. U.S. Secretary of State Mike Pompeo completes a three-day trip to Saudi Arabia tomorrow and will then leave to pay his respects to the late Sultan Qaboos bin Said in Oman. The trip will also feature a meeting with Qaboos’s successor, Sultan Haitham bin Tarik, to help maintain strong U.S.-Omani ties under the leadership of the new sultan.

Thinking outside the box. One Indonesian government minister has proposed a novel solution to the country’s widening wealth gap: Culture Minister Muhadjir Effendy called on the rich to start marrying the poor to reduce the country’s poverty rate.

Doomsday prep. A man from Northern Ireland got a little too ambitious in preparing for, in his words, “a nuclear disaster or zombie apocalypse.” He was sentenced to prison for stockpiling explosives in event of the end times, the Belfast Telegraph reports.

NEW FOR SUBSCRIBERS: Want to read more on this topic or region? Click + to receive email alerts when new stories are published on Politics, Security