Republican foreign-policy experts weigh in on the Democrats’ Charleston debate.

On Tuesday, Democrats held yet another debate. And refreshingly, for once, foreign policy was actually on the agenda. Bernie Sanders came under fire for praising authoritarian leaders, Michael Bloomberg insisted that Xi Jinping isn’t one, Joe Biden tried to play up his diplomatic experience, and the rest of the pack sought to prove their credentials. 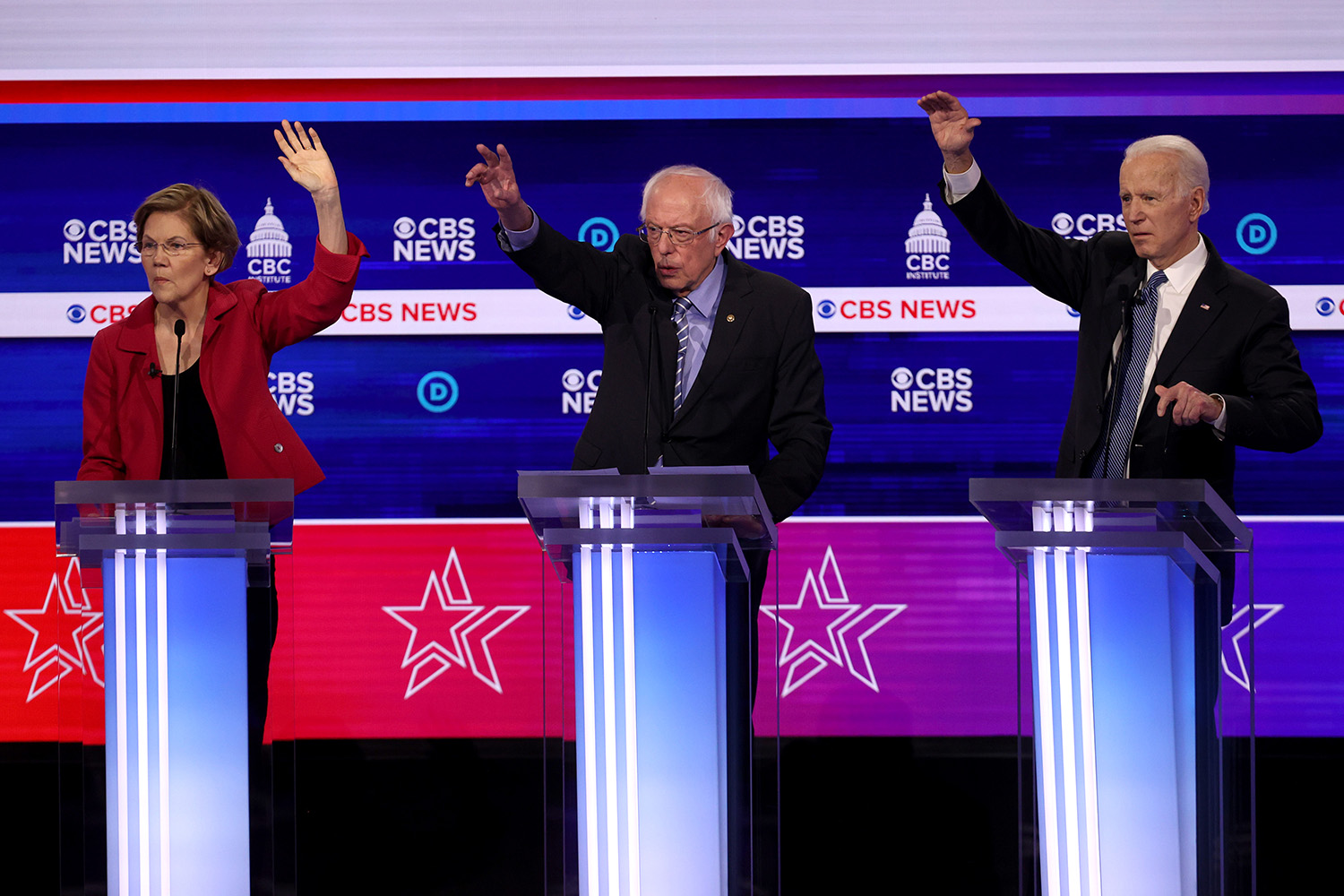 On Tuesday, Democrats held yet another debate. And refreshingly, for once, foreign policy was actually on the agenda. Bernie Sanders came under fire for praising authoritarian leaders, Michael Bloomberg insisted that Xi Jinping isn’t one, Joe Biden tried to play up his diplomatic experience, and the rest of the pack sought to prove their credentials.

The Elephants in the Room team weighs in on what the South Carolina debate means for the 2020 election.

The Cold War ended three decades ago. But watching the Democratic debate on Tuesday night, one could be forgiven for thinking it was still in full swing. Prompted by Bernie Sanders’s gratuitous praise a few days earlier for the communist regime in Havana, the candidates found themselves relitigating their stances toward Marxist governments in places like Cuba, Nicaragua, and even the erstwhile Soviet Union—the infamous destination of Sanders’s honeymoon in 1988.

For viewers of a certain vintage, it recalled the Democratic Party’s struggles on national security in the 1970s and 1980s, when a number of prominent Democrats—including George McGovern, Jimmy Carter, Ted Kennedy, and John Kerry—either offered qualified praise for some communist governments or otherwise struggled to make unambiguous denunciations of communism.

Many voters viewed the Democratic Party as mired in moral equivalency between communism and democracy or—at its worst—susceptible to a “Blame America First” reflex, in former U.N. Ambassador Jeane Kirkpatrick’s memorable phrase. (For younger viewers and readers who might wonder what all the fuss is about, it bears remembering that communist regimes caused the deaths of somewhere between 60 million and 100 million of their own people in the 20th century.)

This is the generation in which Sanders came of age, and he seems unreformed, even unrepentant, for his past fawning over such loathsome regimes. The issue matters not just as a debate about history. It gives a sense for what kinds of moral principles the candidates will bring to their foreign policy; it reveals how they view the lessons of history; and, in the case of Sanders, it provides some clarity as to what governments he sees as models for his version of “democratic socialism.” (For Sanders, the answer seems to be a strange amalgam of Cuba and Denmark.)

Interestingly, it fell to the two former mayors on stage, Michael Bloomberg and Pete Buttigieg, who are at opposite ends of the generational spectrum, to offer the most forceful denunciations of communism—though Bloomberg undercut himself with a qualified defense of Xi Jinping’s leadership.

On Tuesday, Democratic candidates devoted a whopping 30 minutes to national security. Who knew the suits at CBS read Foreign Policy? But kudos to them for taking our critique of last week’s debate to heart.

If Las Vegas was a foreign-policy wasteland, Charleston offered up an abundance of moments to take the candidates’ measure on international affairs.

First and foremost, it’s clear that Bernie Sanders’s inability to strike the right tone in talking about murderous left-wing totalitarians of the past is a feature, not a bug. As he more or less acknowledged, his first move is invariably to slam the United States for not being so great while pointing out that its enemies weren’t really so bad. That’s who he is. It’s authentic. But it’s also likely a gift to Donald Trump should Sanders be the nominee.

The same applies to Sanders’s toxic views of Israel. His hostility to America’s most powerful and reliable Middle Eastern ally is the real deal—right up to the “I love Israel, but” trope. As in: I love Israel, but it has repeatedly elected a “racist” (in his words) as prime minister. As in: The American Israel Public Affairs Committee, the leading advocacy group for U.S.-Israel relations, provides a platform to “bigotry.” As in: Moving the U.S. Embassy out of Jerusalem is a distinct possibility. His animus is genuine, deeply held, and refreshingly transparent for all to see. It’s also wrongheaded and a losing political proposition for most fair-minded Americans. The failure of Sanders’s opponents to call him out on it is a mistake that Trump won’t make.

Michael Bloomberg came off like an adult on the need to keep limited numbers of combat troops in the Middle East to disrupt terrorists. But his refusal to call China’s Xi Jinping a dictator because he answers to the Communist Party’s Politburo sounded just plain idiotic.

Joe Biden was at his best in the coronavirus discussion, invoking his role in the U.S. government’s successful containment of the 2014 Ebola crisis. Biden’s overall toughness on China also resonated, though it would be fitting if he and others gave Trump at least some credit for making the essential shift to viewing Beijing as a strategic competitor, rather than a partner.

Finally, several other candidates collectively assembled what should be a powerful critique of Trump’s tenure as commander in chief. He consistently is AWOL in talking seriously to the American people about some of the most critical issues facing the country. Amy Klobuchar hit him on the coronavirus, Tom Steyer on Russian election interference, Pete Buttigieg on the humanitarian catastrophe that the war crimes of Vladimir Putin and Bashar al-Assad are currently perpetrating in Idlib, Syria.

That’s good stuff. Tie it all together and you’ve got the makings of an effective line of attack on Trump’s record.

Though it likely drew high ratings (the last one in Las Vegas was seen by over 19 million viewers), Tuesday night’s debate was sometimes painful to listen to, with its cacophony of waving hands and candidates talking over each other. Bernie Sanders took some hard shots. Pete Buttigieg’s zinger that no nation in Europe has banned private health insurance was especially sharp, homing in on Sanders’s oft-referenced Scandinavian models; both Sweden and Denmark, he said, allow private insurance.

On world affairs, all the candidates were simplistic, mundane, and often wrong. On climate change, there was no articulation of a sensible climate policy—or conceding that the Sanders/Warren plan of banning fracking would be worse for the climate, moving us back from cleaner natural gas to coal. There was little realism on China, with Joe Biden blithely suggesting he would force the country to move on climate change and other issues. Amy Klobuchar gave the most thoughtful reply when asked about North Korea, saying she would meet with leader Kim Jong Un but only as part of a larger, thought-through process.

Not an Encouraging Night

For Republican foreign-policy wonks, there has been precious little to like in the Democratic primary, and that did not change Tuesday night.

On one screen, an administration plainly flailing about in its response to an emerging global pandemic, arguably the first bona fide crisis of the Trump presidency; on the other screen, a passel of would-be contenders shouting at each other but especially drowning out the few with genuine executive experience of the sort needed to manage a crisis like this.

Meanwhile, Elizabeth Warren continued to reprise her version of the role played by Chris Christie in 2016: kneecapping those who stand in the way of the front-runner without significantly enhancing her own chances at the top prize—but, one suspects, perhaps hoping to increase her odds of landing herself on the undercard.

Republican foreign-policy experts weigh in on the most eventful debate of the 2020 primary.