“You really have to go back to decades ago in the U.S., to Dust Bowl days, to understand just how devastating this can be.”

One of the world’s most impoverished regions faces yet another crisis. Swarms of voracious desert locusts are descending on East Africa in alarming numbers not seen in decades. Climate shocks—droughts followed by an unusually high number of cyclones—created the perfect storm of conditions for the tiny critters to breed and travel across the region from the Arabian Peninsula en masse, devouring virtually everything in their path.

The tiny pests are a ticking humanitarian time bomb, fueling food insecurity with the potential to exacerbate preexisting conflicts in an already precarious region. Locust swarms have been tracked in northeastern Kenya as large as 926.6 square miles—an estimated 192 billion locusts. Some swarms can consume as much food as 35,000 people in a single day and, with the right winds, travel up to 100 miles a day.

Foreign Policy spoke to the Trump administration’s top aid chief, USAID Administrator Mark Green, about the scale of the crisis and how the United States is responding.

Foreign Policy: How alarmed are you by the locust swarms, and what are the knock-on effects we could see in East Africa?

Mark Green: From a development perspective, many of the countries currently afflicted are focus countries for us in our food security work, our Feed the Future program in Kenya, in Uganda, in Ethiopia. We’ve all been making investments and building capacity for these countries to be able to not only provide for their own food needs but also to develop their economies along food production and value-added agriculture lines. This has the potential to undo a lot of that, and that would be a tragedy in a number of ways.

In parts of this region, these are also countries for which we have been dedicating a lot of humanitarian assistance. Somalia and Ethiopia, in particular, and parts of Kenya—these are countries where there have been humanitarian, food-related needs for some time. This just makes that worse.

On one hand, the timing could have been worse in the sense that harvests are in, so this doesn’t have the worst-case scenario effect. However, we need to be involved, all of us, the U.S. and other donors, to help take care of the infestation before the next planting season gets underway [between March and May in this part of Africa] so that we don’t see the full devastation of a lost season. Now is the time for us to act.

For a modern American audience, it is hard to convey just how devastating swarms of locusts can be. The swarms that we’re talking about can move up to 100 miles in a day. They eat as much as 35,000 people. You really have to go back to decades ago in the U.S., to Dust Bowl days, to understand just how devastating this can be. So it really is a crisis.

FP: What is the worst-case scenario here? How big of a humanitarian crisis could this become if the swarms aren’t eradicated?

MG: It’s hard to fully judge, and hopefully we never have to find out. But if we have such swarms of locusts hitting in the early days after planting, that would be devastating. That would hit at the worst time in terms of wiping out full crops. The fear is that this could push as many as 3 million people into food insecurity. In many parts of this region, people are on the edge from a food security standpoint anyway, and this is just one more force that could turn it from food insecurity into something far worse.

Thus, the reason that we act. We’ve been working with the governments in this region for some time. We have helped with technical assistance, early warning systems. They moved early on, but this has overwhelmed them in terms of the scope and scale. 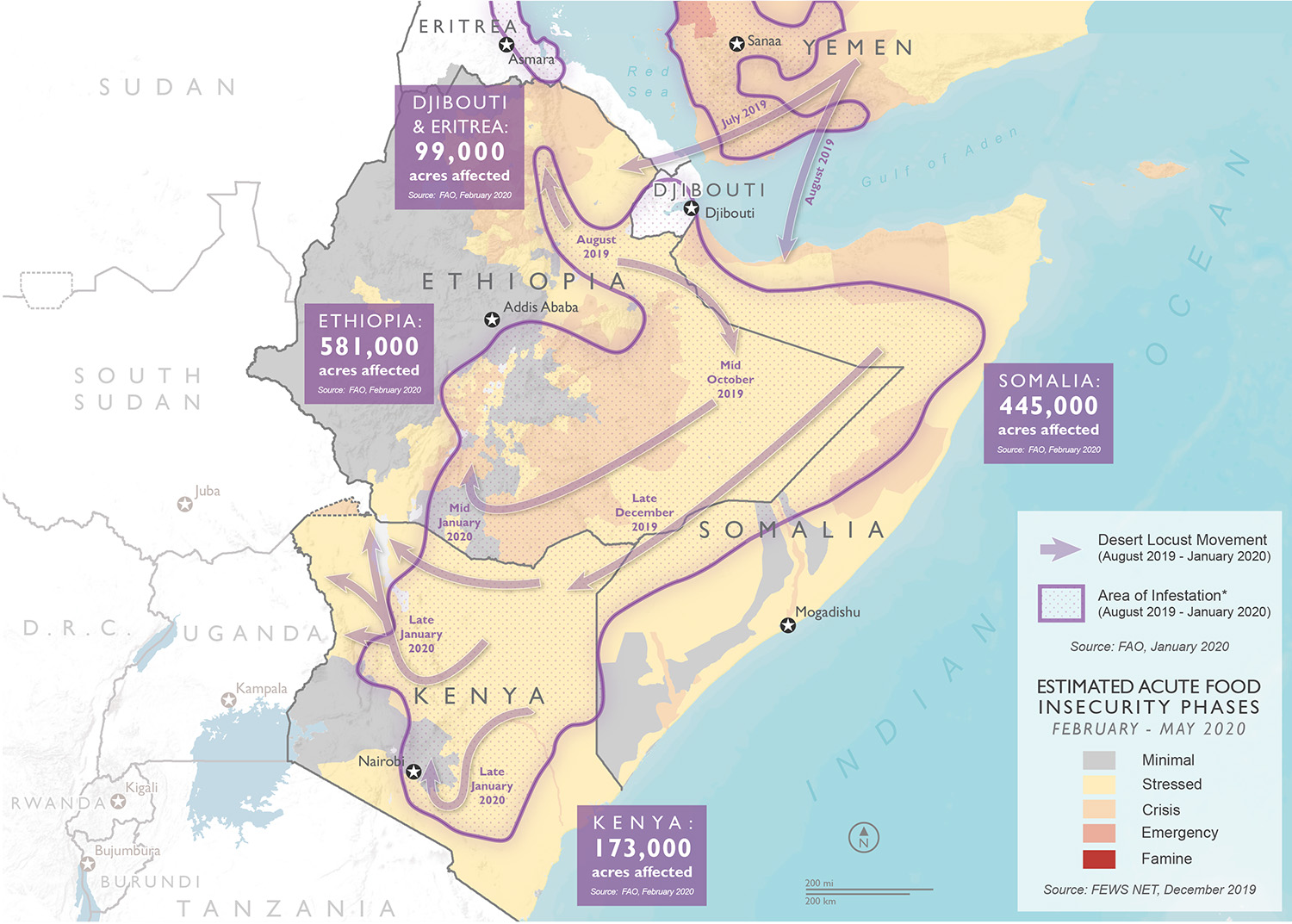 Note: The boundaries and names on this map do not imply endorsement or acceptance by the U.S. GOVERNMENT. Map created on Feb. 3, 2020. Source: USAID/OFDA.

FP: Senior U.N. officials say they need $76 million now to address the locust swarms and might need 15 times that much if we don’t act quickly. As of Feb. 21, the U.N. Food and Agriculture Organization said it had only $22 million of that. So is USAID’s pledge of just $8 million really enough to fight these locust swarms?

MG: Obviously, this is not intended to be the only support that they have in the region. We turn to our donor partners to work with us, as we always do, and we’ll continue to monitor the situation as we always do.

But I think it is fair to raise the alarm bells—of course we are, too—and that’s one of the reasons for the announcement [of $8 million] and the technical assistance that we’ve also sent into the area. We’re helping to train pest control experts and scouts, and we’ve provided some protective equipment. These are countries that are close allies and development partners, and we’ll continue to monitor and help as we can.

We have humanitarian representatives in the region who are working with governments on a technical basis to help manage and monitor the response. The food security investments that we have made are certainly helpful.

FP: Even with U.S. and international support, are you confident these developing countries, including Somalia and South Sudan, have the capacity to fight these swarms?

MG: What I can say is we’re engaging with them and we’ll continue to do so. We have some idea of capacity, and we’re looking to boost it. That’s also part of what we’re sending there—technical assistance and training. Obviously, these countries need to lead, and they are leading. Our job, as their partners and allies, is to work with them and help them in their response.

FP: Many experts attribute the conditions that caused this swarm to climate change. Do you agree with their assessment, and do you think locust swarms of this nature could become more frequent in the future?

MG: Locusts aren’t new. As you just heard, we had locust infestation and outbreaks in other parts of Africa over the years, sadly. We did have an unusual convergence of conditions over the last year, but we look at it in terms of what we see as the challenge in front of us. I think it’s a little early to draw broader conclusions, but we’re always working with our partners to help them deal with the fallout from weather and climate, whatever that may be.

Staffers complain of abuse of authority, harassment, and widespread discrimination at the World Food Program.

Outfoxed and Outgunned: How China Routed the U.S. in a U.N. Agency

The race for the top job at an obscure U.N. agency tested great-power influence on the world stage—and Beijing coasted into a victory over Washington.

Staffers complain of abuse of authority, harassment, and widespread discrimination at the World Food Program.

Outfoxed and Outgunned: How China Routed the U.S. in a U.N. Agency

The race for the top job at an obscure U.N. agency tested great-power influence on the world stage—and Beijing coasted into a victory over Washington.