The Age of the Airship May Be Dawning Again

Dirigibles ruled the skies once. Can they make a comeback?

You might think that the tragic end of the Hindenburg disaster in 1937 marked a clear end to the airship era. The famous footage of the German airship plunging in flames became the overwhelming image of a seemingly doomed technology.

You would be wrong.

For decades, the Goodyear fleet of blimps have been the only working airships most people had a chance of seeing in real life. But a handful of companies are looking to bring back the spectacular dirigibles.

The government of Quebec will be pitching 30 million Canadian dollars (23 million in U.S. dollars) to Flying Whales, a French company, to start building its massive zeppelins. The company has only been around since 2012, and it hasn’t gotten any of its airships off the ground—yet. The plan has been derided by opposition parties, not as a flying whale but as a white elephant.

But cargo airships may actually make a tremendous amount of sense. They are relatively cheap, they can carry enormous amounts of material, and they emit significantly less greenhouse gas than other modes of transportation.

The compelling arguments for dirigible travel put these airships in a class of technology, with nuclear power and lunar colonization, that is experiencing an unexpected modern renaissance.

Flying Whales’ LCA60T model, according to the company, will be able to carry up to 60 metric tons of goods, travel up to 62 miles per hour, and serve remote areas with ease. If all goes according to plan, the company hopes to get the first airship off the ground in 2022.

There’s still a healthy dose of skepticism around the company’s lofty promises. Its main backers, prior to Quebec’s financial endorsement, have been the French National Forest Agency and the Chinese government.

Flying Whales’ website is enigmatic, and the section of the site explaining the airships’ structure isn’t particularly helpful—the description of its structure reads “what else… – Hi George :)” while if you’re looking for details on their “safe lifting gas” it reads, somewhat snarkily, “helium obviously.”

It’s that last point that might make the whole idea completely untenable: There might just not be enough helium left. 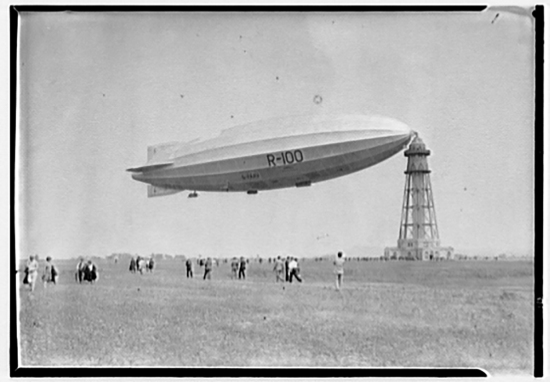 While the most famous airship may be the Hindenburg, it was hardly the first—nor was it the last.

For a time in the first half of the 20th century, airships were fashionable, practical, and futuristic. But their calamitous track record ultimately soured the public.

Less remembered, perhaps because its downing was never immortalized on an album cover, was the English airship R101. The dirigible was dubbed the “socialist airship,” as it was designed and built by the United Kingdom’s state aviation department. The R101 was constructed as part of a state-sponsored competition, pitting government engineers against private-sector workers. The “capitalist airship,” the R100, was designed and constructed by a scrappy engineering team on a remote airbase in Yorkshire.

The opulent socialist airship was rushed to flight, even amid a variety of problems. It took off, en route to British India, just as its capitalist competitor set off for Canada. The government airship sagged and crashed into the French countryside just a day into its voyage, killing 48 of the 54 onboard—including the aviation minister—while the private airship conducted a celebrated tour of Montreal and Toronto before heading back to London. (“Everybody’s talking about the R100,” goes the chorus of a song from the iconic francophone Canadian folk singer La Bolduc.)

Most airships of the day took off using the highly flammable hydrogen—thanks mostly to an American monopoly on helium, its nonflammable alternative. Washington had banned the export of the gas, in part over fears of the military uses of the airships, which had been used in the world’s first air raids on London during World War I.

The helium-buoyant American ships weren’t always safe, either. The USS Akron carried out several successful flights across the continent, but it was ultimately pushed down by strong winds in 1933 and crashed into the Atlantic, killing 73 people on board and two rescuers.

As U.S. President Franklin D. Roosevelt remarked after the Akron went down, “ships can be replaced, but the Nation can ill afford to lose such men.” Eventually, governments stopped replacing the ships. 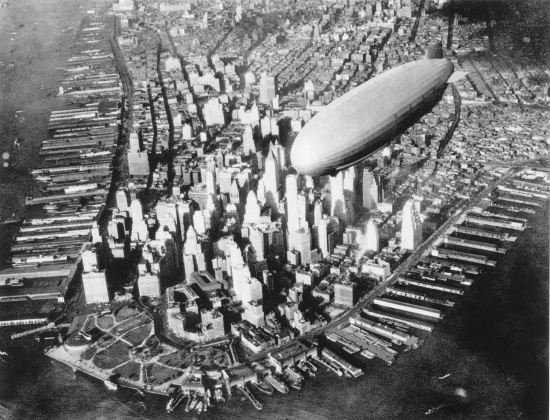 But it was the 1937 Hindenburg disaster, made famous by the newsreel footage of the zeppelin bursting into a ball of flames as it tried to dock at the Lakehurst air base in New Jersey, that really scuttled the industry. The United States’ decision to lift its helium ban after the crash did little to revive faith in airships. The U.S. Navy used its small fleet for anti-submarine warfare and reconnaissance in World War II, but the airship industry was effectively dead.

It would stage a comeback, in a limited way, some decades later, when Goodyear opted for nonrigid airships—blimps—for its advertising campaigns. Airship Industries came around in the 1980s, promising a return of the dirigible. Its ships, like Goodyear’s ships, had no rigid structure inside, meaning they could carry only limited cargo and no more than 14 passengers. The airships of earlier in the century had immense metal structures inside, allowing them to carry more. These new nonrigid ships were made famous by Bond villains, Pink Floyd, and, later, by Ron Paul supporters.

Fame aside, the blimps had little use for commercial air travel or cargo transport. The niche purpose of the blimps meant Airship Industries was hemorrhaging money, and it shut down by the end of the decade.

As with many other commercially nonviable products, airships later found a home in the U.S. military. There was a hope that the dirigibles, which are capable of taking off and staying aloft for prolonged periods of time, would be ideal for persistent aerial surveillance.

The contractor Northrop Grumman was awarded a $517 million contract to build a surveillance airship in 2010, and it managed to build a successful prototype in 2012. The contract was axed a year later. Raytheon was awarded nearly $3 billion for its model, which tethered the airship to a mooring and allowed for constant surveillance of a wide area for a month at a time.

One of Raytheon’s spy blimps was tested in Maryland, where it hung eerily in the sky above suburban homes. In 2015, it broke loose from its mooring and drifted haplessly through Pennsylvania, trailed by fighter jets, before crashing in a field. Raytheon’s hopes of building more surveillance dirigibles crashed with it.

A similar program in Afghanistan, which became notorious among Kabul residents, saw even worse results. The tethers that kept the Big Brother balloons in place were notorious for snaring helicopter blades—one incident killed five American and British service members. 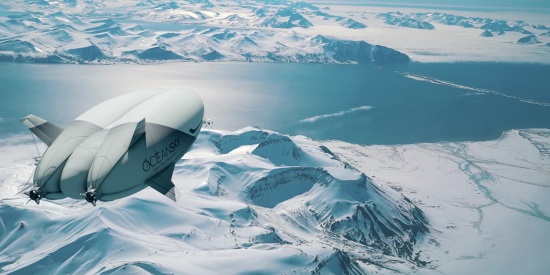 The market for military airships and commercial blimps remained limited thanks to past failures, though not dead entirely.

The cruise company OceanSky is forging ahead with plans to send a passenger airship to the Arctic, using a ship originally designed under the U.S. military’s surveillance program, with a planned voyage in 2023.

Many are banking that the real future of airships, however, is in cargo.

In the vast expanses of the Canadian north, there has long been a need for reliable transportation. Many communities are only accessible by road when winter rolls around and the ground and lakes are solid enough to drive on, if they are accessible by road at all. That means basic goods need to be stockpiled when the weather is cold or flown in by cargo plane—never mind supplies to build long-term infrastructure. Many of these remote communities are reliant on gas generators and are facing shortages of reliable housing stock.

The airships also promise to be a boon for economic development, if they work.

In 2016, a junior mining company in Quebec inked an agreement with U.K.-based Straightline Aviation to use a design being developed by Lockheed Martin to haul rare earth minerals from a remote open-pit mine—the road that was initially planned would have cut across a caribou migration path. That plan went belly-up when the minerals company went bankrupt, although Straightline is forging ahead with plans to offer commercial and tourism flights. 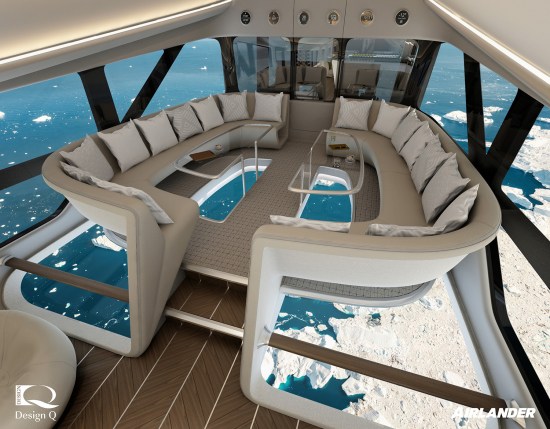 Stranded resources and communities are a policy concern in Canada, Alaska, Greenland, Russia, and elsewhere. Flights are expensive and carbon dioxide-intensive, and they require airport infrastructure. Shipping is more viable as Arctic ice melts, but that often requires deep-water ports and can have damaging impacts on marine life. It’s part of why people keep coming back to airships.

It’s why the French forestry sector is interested in the ships as well. The promise of lifting lumber from far-off places earned the company praise from French President Emmanuel Macron as one of the “industries of the future.”

“If we don’t take risks, we go nowhere,” Legault told reporters earlier in February. Quebec’s investment earned it a 25 percent stake in the project, which in turn brought derision from opposition politicians—one questioned whether the government was inhaling helium when it made the decision.

The money puts Quebec on par with China in the project—Beijing put in $4.9 million for its 24.9 percent stake, through the state-owned Aviation Industry Corporation of China General and the Ministry of Science and Technology. China has plenty of Arctic ambitions itself—and vast distances to cover in its underpopulated west. 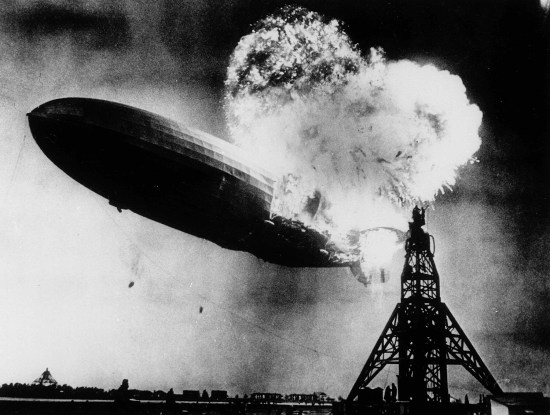 A lack of lift

There’s one massive drawback for the airship industry: The world is almost out of helium.

In recent years, helium prices have skyrocketed as supply has dwindled. Far from just being used in party balloons and blimps, the gas is necessary for MRI scanners and rocket engines. Stockpiles of helium often escape, and are wasted, during other extractive projects. While there have been shortages before, helium is a nonrenewable resource and can take an enormously long time to generate—estimates suggest the earth’s supply could be gone this century.

If the world runs out of helium, it’s not clear that there’s a good alternative. The dangers of hydrogen are well established, and the gas behind the Hindenburg disaster is unlikely to make an air travel comeback.

Hypothetically, there could be an airship lifted by a vacuum—that is, by material that can contain nothing at all inside but withstand the atmospheric pressure from the outside. It is, at this point, science fiction, although NASA has posited that some kind of vacuum airship could eventually be used to explore the surface of Mars.

Airship companies seem satisfied with helium for the time being. OceanSky cruises has a reassuring FAQ on its website, telling those looking to join them on an airship trip to the North Pole that 600 of their cruise ships “would account for just 1% of annual helium consumption” and that each ship “stays filled with the same helium as from its inception, less a tiny annual leakage.”

If these airships can take off despite carrying a century of failed projects, a lack of its necessary resource, and economic justifications that still seem more wishful thinking than reality—it might just be the return of the zeppelin.

Justin Ling is a journalist based in Toronto.