Turkey’s decision to allow migrants to cross into the European Union was intended to pressure EU leaders to come to Ankara’s aid against Bashar al-Assad. It isn’t working.

EDIRNE, Turkey—Driving northwest from Istanbul toward the Pazarkule border crossing between Turkey and Greece, refugees dot the road in groups carrying belongings and children, evoking memories of the migrant crisis of nearly five years ago. Less than a mile from the signs bidding travelers goodbye from Turkey, smoke rises from the encampments of migrants trying to keep warm.

WhatsApp and Telegram groups sprung up immediately following the Turkish border announcement, advertising a so-called hope convoy traveling from Istanbul. Maps were sent out detailing where private buses would leave from, some chartered by local municipalities and others run by private companies with unregulated prices.

In the past three days, thousands of people have traveled from all over the country to try their luck at a new and more stable life. The majority are Afghans, with scores of Syrians, Iranians, Palestinians, Moroccans, Pakistanis, Bangladeshis, and migrants from various East African countries. By the end of the day on Feb. 29, between 2,000 and 4,000 people had amassed in front of Greek border patrol, while others were spread out in groups among the trees on the Turkish side. 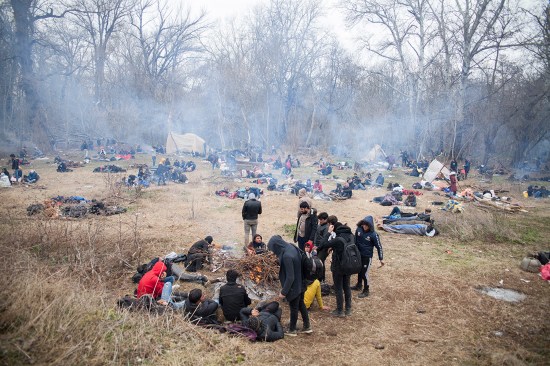 Nearly 4,000 refugees from countries such as Afghanistan, Iran, Syria, Palestine, Bangladesh, and Morocco fan out into the Turkish military zone near the border with Greece on Feb. 29, collecting firewood from the forest to keep warm overnight. Tessa Fox for Foreign Policy

The decision by Turkey to open its borders to Greece, as well as fellow EU member Bulgaria, came after 36 of its soldiers were killed in an airstrike by the Syrian regime near Idlib on Feb. 27. Many observers see Erdogan’s sudden reversal of Turkey’s 2016 agreement with Europe as a tool to pressure the EU and international community into supporting Ankara’s recent military involvement in the nine-year Syrian war.

The deployment of soldiers to Syria followed multiple calls from Ankara for Bashar al-Assad’s regime to pull back from the de-escalation zone in Idlib, mapped out under the 2018 Sochi agreement between Turkey and Russia, and came after meetings concerning a cease-fire between the respective parties repeatedly failed.

While the move might help Erdogan’s negotiating position, it isn’t helping migrants. Even though Turkey’s border may now be open, the news is deceiving migrants attempting to travel to Europe, because Greece has stood firm in preventing any new entries. Greek Prime Minister Kyriakos Mitsotakis stated on Twitter that “no illegal entries into Greece will be tolerated” and deployed riot police and military to the border with Turkey, who subsequently fired tear gas at the thousands of refugees, including women and children, who had arrived at the gate.

When Foreign Policy spoke to refugees attempting to enter Greece on Saturday, they were most eager to ask for any news that had been disseminated from the EU and whether they were going to open the border. Sixteen-year-old Mohammed—who asked to use only his first name—had already spent one night in the rain with his sister-in-law and her five children. “It’s cold, the kids are sick, we need food, it’s really hard here,” Mohammed told Foreign Policy.

Having lived in Turkey for three years after a regime airstrike killed Mohammed’s mother and father in Syria, he and his sister-in-law explained, they needed to go to Greece due to the lack of work in Turkey and a lack of health insurance. At least three people in wheelchairs, including children, were spotted in the crowd immediately in front of the border gate with Greece, blocked off with barbed wire.

A few people took the role of speaking English and directing women and children to come closest to the border gate so they could negotiate with the Greek guards to let them in. One of the refugees acting as a negotiator with a plainclothes Greek guard requested they bring someone from the United Nations to see firsthand the extent of what was happening on the border with Europe. Kasim from Bangladesh—who also asked not to use his surname—was in dismay at the conditions women and babies were sleeping in at the border, describing the scene as dangerous and possibly deadly. 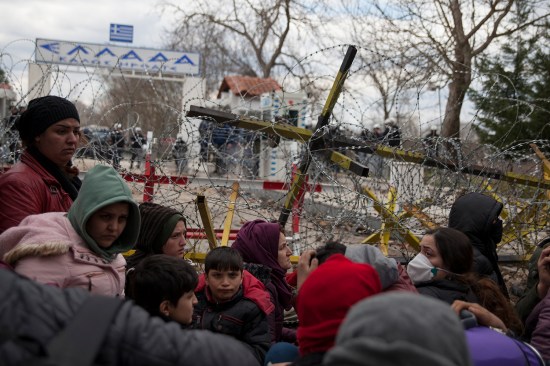 Greek guards at the Pazarkule border crossing have erected barbed wire to block access to the country even to visitors on Feb. 29. Tessa Fox for Foreign Policy

“They said it was open, but why would the [Turkish] president say that if the Greek side is closed?” Kasim, who has lived two years in Turkey, said. “I’ll wait here until they open the border.”

While some people were seen turning back into Turkey from the border having already been there for 24 hours and seeing no luck in crossing, others said they had no money to pay for buses back to their homes. Ali Mahad, a 16-year-old from Afghanistan, said he had paid 200 Turkish lira (about $32) for a bus to the border from Istanbul.

“We’re trying to enter, and [the Greeks] are firing at us—people might die,” Mahad said, referring to tear gas. On Monday, the Greeks said they would be using live rounds, and there has been one death, a Syrian from Aleppo. “We have to wait here—all the people’s money is finished.” He added that no one in Turkey will give him work and all the refugees want is a future without war.

Mohammed and his family from Aleppo had paid 100 Turkish lira ($16) per person for a private bus to take them to the border from Istanbul, and he said they had no money left, forcing them to remain.

As refugees started collecting firewood midafternoon in preparation for the subzero temperatures expected for Saturday night at the border, various aid groups handed out a minimal amount of food. The Turkish SBK Foundation arrived on Saturday with just 10 bright blue backpacks containing sandwiches.

The U.N. High Commissioner for Refugees arrived later in the day, orderly asking for the refugees to stand in a long line to await the delivery of small brown boxes of food, including cookies. While people ran to collect whatever rations they could, it became clear the shortage of food would soon become a dire problem.

The thousands of migrants are camped in the open, erecting shelters from whatever they can find including collected plastic from nearby agricultural plots.

TV appearances from Turkish President Recep Tayyip Erdogan and statements made by Interior Minister Suleyman Soylu continued on Monday, announcing that the number of migrants leaving the country via the north land crossing to Greece had reached 117,677.

This figure is alarming, considering that nowhere close to that number of refugees is even present at the border and the Greek authorities are not letting anyone in. The absolute maximum number of refugees this reporter saw at the border with Greece was no more than 4,000, with many spread out still on Turkish soil waiting for Greece to open the barbed fence for them to cross.

The broadcasted success rate only further encourages migrants to head to the border, where they are met with dismal conditions rather than the freedom of Europe they are searching for. The Turkish government-supported TRT Arabic channel even released a map to Europe, highlighting different routes that could be taken to reach as far as France, a feat seemingly impossible for now.

Asli Aydintasbas, a senior fellow at the European Council on Foreign Relations, told Foreign Policy the numbers are misguided, as Greece is determined not to let any migrants in.

“Using refugees as a pawn is further damaging Turkey’s image and relations with the EU,” Aydintasbas said. “It is also inviting more refugees to Turkey from the eastern border, particularly people from Afghanistan based on the notion that Turkey is now a gateway into Europe.”

The inflated numbers of migrants supposedly exiting Turkey both scares EU officials and pleases a certain demographic of Turkish voters who resent refugees inside Turkey and are unhappy that their government is sending soldiers to die inside Syria. The Turkish government also has its reasons to force Europe’s hand. Ankara has long argued that the 2016 deal with the EU to stem migrant flows into Europe was not upheld. While Turkey sealed its borders in exchange for financial compensation for sheltering millions of refugees, the EU has not accepted its quota of settling people in its member states.

Europe promised it would accept an orderly refugee transfer from Turkey at a 1:1 ratio, though Aydintasbas said the numbers of those settled in the EU are very low and the quotas have not been filled. Still, Europe thinks Turkey’s current action is a violation of the 2016 deal. While the European Commission spokesperson Peter Stano told the press on Feb. 28 in Brussels that agreement stills stands and the Europeans “expect Turkey to uphold its commitment,” Greece announced on Monday it would stop accepting asylum applications for one month. “In the long run, Turkey is running the risk of further souring its relations with the EU by this type of threatening,” Aydintasbas added.

Relations between the EU and Turkey tend to revolve around accession negotiations, which have been ongoing for over a decade. “As for preserving any hope that Turkey could, at some point in the future, could [enter the EU], this gesture of opening the border makes it very difficult,” she said.

While Turkey expects NATO or EU military support to protect its soldiers inside Syria, as the domestic population boils with resentment after dozens of their troops were killed by the Assad regime, it’s unlikely to happen given Russia’s huge presence in Syrian airspace.

And although NATO had confirmed it would assist Turkey with air support, Greece has retracted its vote due to the migrant influx at its borders. Greek Foreign Minister Nikos Dendias said Athens would veto NATO’s actions if the statement of support for Turkey does not demand compliance with the EU-Turkey deal on migration from Ankara in return.

This move shows Turkey’s tough talk toward Europe and its encouragement of refugees seeking to enter the EU may not result in the support Ankara is looking for.

Tessa Fox is a freelance journalist, photographer, and filmmaker. She focuses on war, conflict, and human rights in the Middle East. Twitter: @Tessa_Fox