Selling Your Soul to the Kremlin

A new book chronicles the Faustian bargain that Russians—from holy men to human rights activists—have made with Vladimir Putin’s government.

Making sense of Russia has become more urgent since the Russian leadership threw down a gauntlet to the Western powers. Vladimir Putin, coming to the presidency at the start of this millennium, at first played in harmony with the United States. But unhinged by the so-called color revolutions that rocked Georgia and Ukraine in the early 2000s, he suspected U.S. meddling and resolved to challenge Washington in global affairs.

Relations between Moscow and Washington cooled under U.S. President George W. Bush and, despite a slight thaw when Putin’s protege Dmitry Medvedev was Russian president, went into a deep freeze in 2012 after Putin returned to the highest Kremlin office. He despised U.S. President Barack Obama almost as much as he hated Secretary of State Hillary Clinton.

Moscow’s propaganda outlets denounced the U.S. government as the fount of geostrategic evils and called for a multipolar world in which American power would be curtailed. Meanwhile Russian foreign policy sought conciliation with U.S. rivals, notably the People’s Republic of China, while challenging the United States and its allies at every turn. 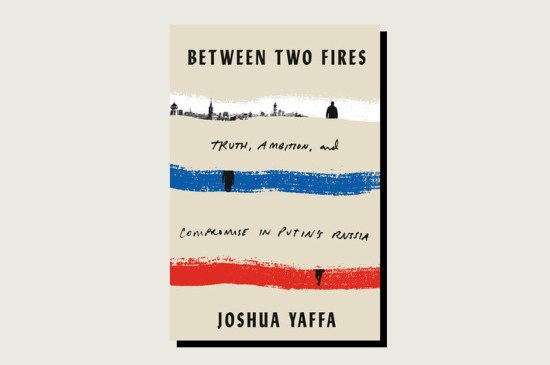 Putin’s pugnacious rhetoric imprinted itself on policy. He accelerated nuclear arms modernization and annexed Crimea in 2014. Russian forces have continued to bathe eastern Ukraine in blood, Russian digital operatives and intelligence agents interfered maliciously in the 2016 U.S. presidential election, and Russian money was used as a tool to undermine the European Union.

Like most journalists who have lived in Russia while reporting on it, Joshua Yaffa focuses on the domestic situation in his new book, Between Two Fires. But he does not ignore foreign policy, because Russian internal affairs help to condition the options favored by the Kremlin in international relations. And it is difficult not to discern a parallel between the Kremlin’s belligerence abroad and its illiberal activities on the home front.

Indeed, the Putin administration savagely represses Russians who speak or act against it. The electoral system has been further enfeebled since Boris Yeltsin stepped down from the presidency at the end of 1999. Opposition politicians and investigative reporters have been persecuted, sometimes even assassinated. Parties gain the legal registration to contest national elections only if they represent no serious threat to the ruling elite. The main TV stations dutifully repeat the news as dictated by the Kremlin.

The Russian people, as Yaffa points out, have grown habituated to this contemporary reality. When Russians think about the 1990s, they spend little time pondering whether a different outcome for Russia’s transition from communism was a realistic possibility. Although Yeltsin pursued a foreign policy of collaboration with the United States, his management of elections and parliaments was characterized by persistent fraud, and it is misleading to picture Putin’s arrival in power as the first bridge on the road to illiberalism.

Yaffa’s highly original and riveting account describes how a growing number of more or less liberal-minded figures across the whole range of Russian professional life have decided to make their peace with the ruling establishment.

Yaffa, however, deliberately directs his focus away from the Kremlin. Instead, his highly original and riveting account describes how a growing number of more or less liberal-minded figures across the whole range of Russian professional life have decided to make their peace with the ruling establishment. They have come to the judgement that political liberals are unlikely to win a national election in the near future. They conclude that if they are to make an influential contribution to the life of the nation, they have pick up a long spoon and sup with the devil.

Putin for his part knows that he would lose more than he could gain by excluding them entirely from public affairs. Their services make his Russia operate more effectively and increase the impression that he rules by consent. The country is no longer a totalitarian dictatorship, and the Putin administration is flexible enough to allow breathing space for those who do not like its policies but agree to forswear open criticism of them. It is a tacit compromise that suits both sides in current circumstances.

The Russian president’s amateur history lessons are outraging neighboring countries. While he is right to criticize a recent EU Parliament resolution, his historical revisionism doesn’t stand up to scrutiny.

Vladislav Surkov, who stage-managed Russia’s involvement in Ukraine, is replaced.

Why Putin Is Smiling

Even if Russian intelligence didn’t orchestrate the near-total political dysfunction that led to Tuesday’s impeachment articles, things sure have gone the Kremlin’s way.

Heda Saratova, for instance, is a human rights activist who worked for years to rescue victims of persecution and torture in Chechnya. She built her career as an official of Memorial, which is the organization that fights to tell the truth about atrocities from the Stalinist 1930s to the present day. In the course of her enquiries she witnessed the drastic narrowing of opportunities as the Chechen president and Putin loyalist Ramzan Kadyrov dealt as brutally with incoming investigators as he did with his critics among fellow Chechens. Her life’s choice has been to abandon overt criticism of Kadyrov so as to gain otherwise unlikely opportunities to save the lives of those whom he was abusing. In her view, it was not a perfect solution but better than doing nothing.

Elizaveta Glinka, a medical doctor, faced a similar dilemma in her work among the dead and wounded in eastern Ukraine. As the price of being able to continue her activities saving sick and injured children, she was drawn into cooperating with the state authorities in Moscow. The Kremlin showered her with honors, which enabled it to burnish its own reputation for philanthropy while continuing the war. Glinka was aware of how she was being used but saw it as the only available way that she could alleviate the appalling distress. Her last exploit would have been to perform the same services in Syria, attended by television crews. Tragically, her flight to the war zone crashed on takeoff from a Russian military airport near the southern city of Sochi.

Not all of Yaffa’s portraits of those cooperating with the establishment have involved individuals who needed to curb the murmurs of a liberal conscience. Konstantin Ernst is a renowned TV producer who put his creativity as the disposal of the Russian authorities. He has a chameleon’s ability to change color as circumstances shift. He climbed to the apex of his career when he was assigned the task of directing the opening ceremony of the Sochi Winter Olympics in February 2014. The five rings of the Olympic symbol shone up to the heavens above the stadium in the form of five gigantic snowflakes (one of which didn’t work, but nobody minded), and the audience was treated to a balletic tableau of Russian history from tsarism to the present day. Peace and love after much suffering was the unifying theme.

Ernst’s masterpiece of soft power would have had a more lasting effect worldwide if Putin had not decided to invade Ukraine and annex Crimea later that month. There were no liberals in Putin’s inner circle involved in the fateful discussion, and he did not bother even to seek advice from either his prime minister, Medvedev, or his foreign affairs minister, Sergei Lavrov. The core of his thinking was that Russia should and could do whatever was necessary for recognition as a global colossus.

Indeed, nothing annoyed him more than when, in March 2014, Obama scornfully referred to the Russian Federation as a mere regional power. The Putin administration was determined to prove that Obama had seriously underestimated it and that economic sanctions against Russia would never deflect it from its desired objective.

Yaffa notes the national popularity and political supremacy that accrued to Putin as the result of the Crimean land grab, when his poll ratings rose to 89 percent—an extraordinary achievement by someone who had held one or other of the two supreme offices of state for so long. And Putin has predictably earned additional plaudits at home as Russian arms and diplomacy filled the vacuum left by Obama and Trump in the wars across the Middle East.

Russia’s renewed assertiveness welled up from deep and wide feelings among Russians in general that the country had to stand tall again after the humiliations of the 1990s. It derived just as much from the leadership’s calculation that such a stance would distract the electorate from the defects of their leaders.

This raises a question about the prospects for continued political and social stability, the same stability that—as Yaffa painstakingly describes—induced so many Russians to think it useless to engage in direct opposition to an obviously greedy, corrupt, and authoritarian administration. When in 2011 Putin announced his intention to stand for a third presidential term, there was an upsurge of rallies and demonstrations against him. In response, his campaign slogans noticeably increased the number of promises about welfare benefits. Evidently, he and his advisors sensed that there might be serious trouble for him unless he offered to relieve the material hardships endured by average Russian households.

Stability has convinced many Russians that it’s useless to engage in direct opposition to an obviously greedy, corrupt, and authoritarian administration.

An acute threat to the Putin administration arose in summer 2014, when the price of oil plummeted on world markets. As the finance ministry tightened its purse strings, sharp new cutbacks on welfare payments were imposed. By mid-2018, the administration was pushed into extending the obligatory working years before retirement. This time it was retirees rather than the usual political activists who protested, by occupying buses and trains and blocking highways. Putin was shocked into agreeing to restrict the scope of pension reform.

Other countries, of course, have witnessed much more tumultuous groundswells of anti-government protest. Russia in the last 30 years has seen nothing like the Arab Spring of 2011, when long-ensconced ruling cliques were overturned by the fury of street demonstrations. Nothing quite as serious as even the gilets jaunes who brought Paris and other French cities to a standstill in the winter of 2018 to 2019 has yet transpired.

The likelihood at present is that the uppermost elite in Russia has the guile and ruthlessness to see off any disturbances. But Putin cannot rule forever, and he has repeatedly shown that he is capable of making mistakes by overplaying his hand. Embracing the Chinese while annoying most Americans may soon come to be seen as a poorer strategy than playing them off against each other.

For the moment, though, he can count on many ambitious Russians concluding that their careers require them to compromise with the Kremlin. Good and not-so-good men and women are forced to make difficult choices—and Joshua Yaffa’s remarkable book is a guide to the pain and pleasure of their lives in the public arena.

Robert Service is an emeritus professor at Oxford University and a Hoover Institution senior fellow. His latest book is Kremlin Winter: Russia and the Second Coming of Vladimir Putin.

The Russian president’s amateur history lessons are outraging neighboring countries. While he is right to criticize a recent EU Parliament resolution, his historical revisionism doesn’t stand up to scrutiny.

Vladislav Surkov, who stage-managed Russia’s involvement in Ukraine, is replaced.

Why Putin Is Smiling

Even if Russian intelligence didn’t orchestrate the near-total political dysfunction that led to Tuesday’s impeachment articles, things sure have gone the Kremlin’s way.