When community spread begins, social distancing will hardly be effective in a region with one-fourth of the world’s population.

Welcome to Foreign Policy’s weekly South Asia Brief. The highlights this week: Nations brace for the community spread of the coronavirus, Sri Lanka considers delaying its elections, and a top Kashmiri leader is freed.

Welcome to Foreign Policy’s weekly South Asia Brief. The highlights this week: Nations brace for the community spread of the coronavirus, Sri Lanka considers delaying its elections, and a top Kashmiri leader is freed.

The number of reported cases of the new coronavirus continues to rise across South Asia. Pakistan, which borders both Iran and China—two of the world’s three worst-affected countries—has seen its number of cases double for a second consecutive day (the latest tally is 236). But across the region, a paucity of testing means those figures are just the tip of the iceberg. Despite being home to one-sixth of the world’s population, India has conducted fewer tests than South Korea, which has only 51 million people. According to the New York Times, South Korea has tested 4,800 people per million while India has tested just five per million.

After initial delays (as recently as last week, groups of hundreds of people were still gathering for Holi celebrations) most South Asian countries have now put in place strict restrictions on travel and large gatherings. The question is whether such moves have come too late to prevent widespread community transmission, especially given how densely populated the region’s cities and towns tend to be.

At this point, there are several causes for serious concern.

As testing expands—India, for example, has only 52 testing centers—more cases of the coronavirus will be discovered. But there are missing metrics. In India, a country that could serve as a proxy for the region, only 77 percent of deaths are actually registered. Just 22 percent of deaths are certified by medical practitioners. In other words, there could already have been deaths due to COVID-19 that have simply not been recorded.

If community spread of the coronavirus is already underway across South Asia, the region’s health care system will come under unprecedented stress. Consider hospital beds, for example. According to data from the OECD, India has just 0.5 hospital beds for every 1,000 people. The United Kingdom has five times as many per capita (2.5), Italy has more than six times as many per capita (3.2), and South Korea has over 24 times as many per capita (12.3). If the number of infections in India rises exponentially, the country’s hospitals will struggle to cope. India has just 0.8 doctors for every 1,000 people, while the corresponding numbers for the United Kingdom, Italy, and South Korea are 2.9, 4.0, and 2.3 respectively.

Other South Asian countries have just as much cause to worry. In an interview this week with the Associated Press, Pakistani Prime Minister Imran Khan candidly expressed his fears: “If [the coronavirus] spreads, we will all have problems with our health facilities. We just don’t have that capability. We just don’t have the resources.”

There is a counterpoint, although it is not one I am convinced by. Sometimes, broken systems can offer unlikely advantages in a crisis. Health experts have long criticized the region’s pharmacies for selling antibiotics without a prescription, for example—a practice that is already contributing to antibiotic resistance. If the coronavirus spreads, and patients can fight secondary bacterial infections with easily available antibiotics, they may lower the region’s death rates. But it’s a dangerous hope to rely on, as is the theory that the region’s youthful demographics will automatically shield it from outbreaks.

As Sumit Ganguly writes in FP, India’s emergency response systems sometimes hold up remarkably well. In 2018, the state of Kerala curtailed the spread of the Nipah virus, and the nation has a history of successful contact tracing in influenza outbreaks. But the question now is whether the number of coronavirus cases will grow too high, too quickly, and overwhelm the country’s hospitals. Have South Asia’s countries missed their chance to flatten the curve?

It will be several weeks before we’ll have real data and answers. Whatever happens, the pandemic will be a reminder to South Asia’s governments that they have long neglected health care infrastructure, especially for their lower-income populations. As the chart below shows, South Asian nations have among the lowest rates of spending on health care as a proportion of their GDPs.

Sri Lanka’s election. Opposition parties in Sri Lanka are calling for national elections to be postponed because of fears about the spread of the coronavirus. On Monday, President Gotabaya Rajapaksa announced that the April 25 vote would go ahead as planned, but a growing number of politicians are arguing that campaigning and voting would be too risky in a country that has already recorded 43 cases of the coronavirus.

Pakistan and China’s deep friendship. In another strange symbol of what can only be described as fealty, Pakistan President Arif Alvi arrived in Beijing on Monday to convey support for China’s battle to recover from the world’s highest number of COVID-19 cases and deaths. “Long live China-Pakistan friendship!” tweeted Zhao Lijian, China’s foreign ministry spokesman. The visit was Alvi’s first to China. While the spread of the coronavirus has begun to slow in China, Pakistan is beginning to see a spurt in cases this week.

Kashmiri leader freed. Farooq Abdullah, a three-time chief minister of India’s Jammu and Kashmir, was released from detention last week after seven months. “Now I will be able to go to Delhi and attend parliament and speak for you all,” Abdullah told reporters in Srinagar, while refusing to speak more broadly about the security crackdown in his state. Abdullah’s son, Omar Abdullah, also a former chief minister, remains in detention.

New Delhi’s crackdown in Kashmir began on Aug. 5, 2019, after it revoked certain autonomies of the state and cut off internet access—and arrested thousands of political leaders and civilians. Earlier this month, India returned some internet and social media services to Kashmir, although surfing speeds are still reportedly very slow.

Time to test your geography. Given the fears over the spread of the coronavirus, I’ve been thinking about borders this week. Which pair of South Asian countries has the longest border?

Telecom taxes. Officials from Vodafone’s Indian joint venture have long been clear that their company will go bankrupt if it has to pay $7.4 billion in retrospective taxes and spectrum fees. It seems New Delhi is finally taking those claims seriously. On Monday, the government asked the country’s Supreme Court to allow telecommunications firms a period of 20 years to repay their dues.

It is unclear whether the court will accept New Delhi’s request. If Vodafone Idea were to collapse it would mean that one of the world’s biggest cellular markets would be reduced to a duopoly, with Bharti Airtel competing against Reliance Jio. 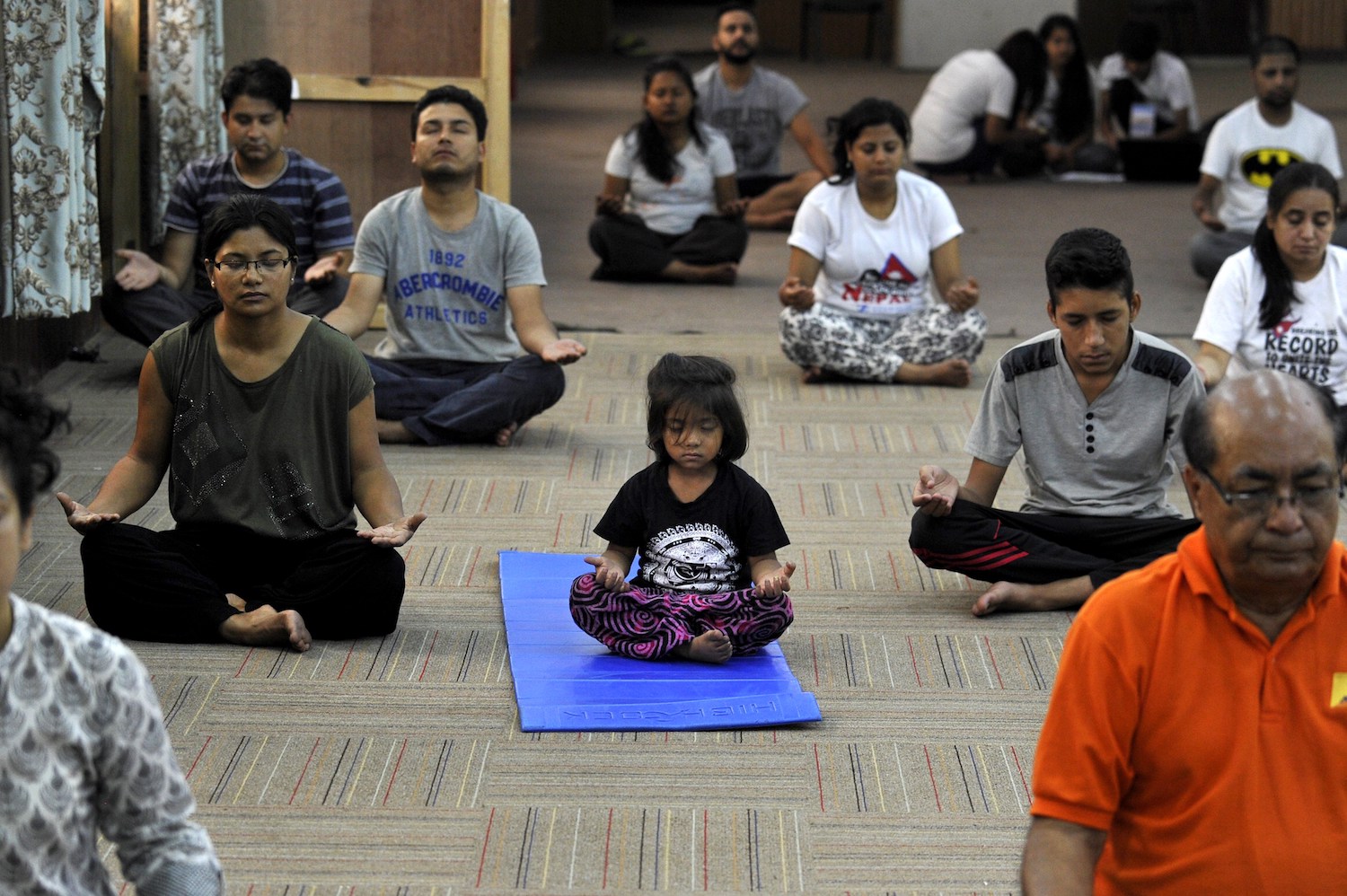 Yoga politics. In April, Nepal will become the first country in the world to make yoga a required subject in elementary and junior high schools. While the move may at first seem driven by reasons of health and well-being, the New York Times reports that the reality is more complicated. Yoga is increasingly seen as tied to Hinduism—and rising Hindu nationalism—leading critics to suggest the decision has something to do with trying to appease New Delhi. And that may upset Beijing: The tiny Himalayan country has long been the subject of a tug-of-war between bigger neighbors India and China.

At more than 2,500 miles, India and Bangladesh share the world’s fifth-largest border (The top four, in ascending order, are China and Mongolia, Argentina and Chile, Kazakhstan and Russia, and Canada and the United States.)

NEW FOR SUBSCRIBERS: Want to read more on this topic or region? Click + to receive email alerts when new stories are published on Health, India

Hezbollah Is Trying to Be Lebanon’s Savior