Parsing the latest economic fixes to the economic devastation being caused by the coronavirus.

The Trump administration, finally grasping the gravity of the coronavirus pandemic, is scrambling to craft an emergency economic rescue package, after the Federal Reserve threw the financial equivalent of the kitchen sink at plunging markets and a sputtering economy to no avail. 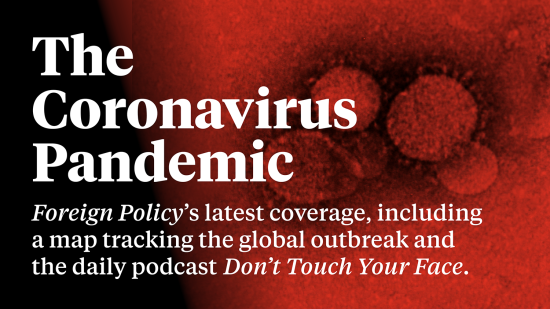 On Tuesday, just hours after the White House was reportedly preparing to present a new stimulus package heavy on the kind of tax cuts that U.S. President Donald Trump previously favored, the administration gave that up and now plans to just mail money to Americans in hopes of tiding them over.

U.S. Treasury Secretary Steven Mnuchin said that while Trump still prefers a payroll tax cut, they need something that can deliver relief to Americans now. “And when I say now, I mean in the next two weeks,” not six to eight months under tax relief, Mnuchin said.

The growing, if belated, effort by the administration to grapple with what appears to be a massive economic hit from the outbreak of the new coronavirus is ramping up after one of the worst weeks on Wall Street in history, wiping out nearly all the gains since Trump took office and sending U.S. government bond yields to near-historic lows—not a good sign.

The latest reports are that the administration is looking at a package of $1 trillion to $1.2 trillion, which would include a big dose of cash payments, loan guarantees, and more—well beyond anything the Obama administration was able to deploy more than a decade ago during the worst financial crisis since the Great Depression, making crystal clear how quickly the virus outbreak has morphed in Trump’s view from a Democratic “hoax” to a life-or-death threat to the world’s biggest economy.

The administration has leaped onto a bandwagon that has gained surprising momentum in recent days: the idea of offering direct cash payments to U.S. citizens to act as a lifeline during what are expected to be weeks, if not months, of economic disruption, layoffs, lost wages, and mounting bills. Mnuchin wouldn’t say how big his direct stimulus would be—though he hinted it would be bigger than most congressional proposals floating around, which amount to a $1,000 one-time payment.

The administration’s pivot addresses two concerns that top economists have been arguing for weeks: Any fiscal stimulus the administration undertakes needs to be quick and needs to target people who are going to be the hardest-pressed for cash to buy food, pay rent, and pay medical bills. Mnuchin promised a quick start to the program, assuming Congress is on board, and said it would be means-tested, so it would presumably benefit more than the uber-wealthy.

With many countries in Europe in near-total shutdown (France closed on Monday) and many U.S. cities following suit, the economic consequences of the virus outbreak are becoming clear, even if the duration of the pain still isn’t. Trump on Monday spoke of virus-related disruptions at least through the summer; some clinical experts figure a near-total shutdown for more than a year is the only way to avoid large-scale deaths from COVID-19.

The biggest questions surround the size of the payout. Many proposals in Congress, like Republican Sen. Mitt Romney’s plan for a $1,000 direct stimulus, are dismissed as “laughable” by experts who say they are far too small; other House proposals have discussed potential payments up to $4,000 for certain individuals. Tentative plans from the White House reportedly include an initial tranche of $250 billion in direct payments, followed by another $250 billion as needed a month later.

Italy, in contrast, just unveiled as part of its latest, $28 billion stimulus package a 600 euro ($660) recurring monthly payment to workers and the self-employed.

Even last year, when the U.S. economy was the “strongest ever” in his words, U.S. President Donald Trump was pushing for a cut to the payroll tax—the amount that employers and their workers pay into Social Security every two weeks in their paycheck. Still late Monday, it was the centerpiece of the White House’s $850 billion package. But as lawmakers from both sides of the aisle and economists of all stripes have pointed out, it’s a grossly inadequate tool to use for the job at hand; Democrats on the congressional Joint Economic Committee laid out all the reasons why. The administration seemed to take those arguments on board with Tuesday’s surprising about-face.

First, a payroll tax cut only offers benefits to those with a job, and, as the Institute on Taxation and Economic Policy has extensively documented, it heavily favors higher-income workers—not the unemployed or the retired. So a payroll tax cut would do little or nothing for people who would be among the most vulnerable during a prolonged virus-related downturn.

Second, as Mnuchin acknowledged, since the benefits would come in the weekly or biweekly paycheck, they would be doled out in small amounts over time, rather than landing as a lump sum that could act as a true financial bridge to stave off foreclosures, debt collectors, or medical bills. (A full payroll tax holiday, which Trump floated last week, would have meant an extra $130 or so in every biweekly paycheck for someone making $50,000 a year; the current proposal would have been about half that.)

Third, the latest proposal, thanks to prompting by lobbies like the U.S. Chamber of Commerce, included a partial payroll tax holiday for employers, too. The idea is to reduce some of the financial pressure on businesses facing a prolonged downturn, but there’s little evidence that those savings would benefit workers struggling with even greater financial pressures.

And finally, the whole reason the payroll tax exists is to provide Social Security with a dedicated funding stream that is free from the log-rolling and hostage-taking that makes up the rest of the congressional budget process. Swiping $500 billion or so from the fund now to offer short-term tax cuts means that shortfall would have to be replaced later from somewhere else (even as deficits and the national debt soar)—or simply make it easier for politicians to argue they must cut Social Security benefits altogether, as Trump has advocated.

What about that airline bailout?

U.S. airlines are reportedly asking for a rescue package for their industry of about $54 billion to $58 billion, a mix of grants, loans, and tax relief that would enable them to survive a much bigger threat to commercial aviation than the terrorist attacks of Sept. 11, 2001. While Mnuchin, who has been in constant contact with U.S. airline CEOs, said loan guarantees were under consideration in the latest relief package, it’s not clear how much the administration has signed off on the industry’s wish list.

There are reasons for a too-big-to-fail bailout: The airline industry is undoubtedly of systemic importance, unlike other leisure sectors clamoring for support, from casinos to cruise ships. Aviation in North America supports about 2.4 million jobs directly and 7.3 million in all, providing about $290 billion in direct GDP and more than $800 billion indirectly, through travel and tourism. So letting them all go broke—as the industry now fears could happen globally by May—is hardly an option.

The problem is that a bailout of airlines would risk being a political replay of some of the Wall Street bailouts in the wake of the financial crisis.

U.S. airlines such as Delta just enjoyed a series of gangbuster years, raking in billions of dollars each year from increased business (and massive tax breaks thanks to the Trump tax reforms). Instead of saving even a portion of that firehose of cash flow to build a rainy day fund for the downturn that they all knew was inevitable, the U.S. industry as a whole, Bloomberg calculates, blew 96 percent of their cash flow on share buybacks to benefit executives and shareholders. Now that those billions of dollars have vaporized in the market downturn, taxpayers are being asked to take it on the chin, angering many who propose conditioning providing federal aid on securing public equity in the bailed-out carriers.

What are other countries doing?

Like the United States, which is angling toward including about $300 billion in loan guarantees in the rescue package, nearly every other major economy is racing to craft its second or third stimulus package. France on Monday announced a war plan to deal with the downturn that includes about 45 billion euros ($50 billion) in direct support and more than 300 billion euros ($330 billion) in government loan guarantees for businesses threatened with a downturn; French President Emmanuel Macron has said bankruptcies will not be permitted to happen and nationalizations are not off the table as the crisis continues.

Italy, among the hardest-hit European countries, just wrapped up its second, $28 billion stimulus package with additional support for parents at home due to school closures, support for small businesses, and the outright nationalization (again) of the troubled airline Alitalia.

The United Kingdom, now working on its second bailout package in as many weeks, plans a loan guarantee package north of 300 billion pounds, and is talking of U.S.-style direct financial support for the threatened aviation sector, as well as other hospitality sectors. Japan is throwing another $15 billion into low-interest loans for small businesses.

But there is one looming problem for the worst-hit countries, such as Spain and Italy. Bond spreads—the difference between what investors demand for buying German, gold-plated, super-safe bonds, and riskier Southern European bonds—are creeping up again. That happened in 2012, at the height of the European debt crisis, and nearly ruined Greece, Italy, and Spain. Memories of the repeated beatings the bond market inflicted linger long and are conditioning the response to this crisis. And that is creating some bizarre—and potentially very counterproductive—ironies.

In Spain, where socialists with a further-left coalition partner are in power, there’s no Trump-style free-spending: Despite the urgency of providing some sort of shot in the arm to an economy where nearly all businesses are shut, the government is leery of widening the deficit and getting mugged again by the market.

Fed fails to avert panic over coronavirus impact with no concrete U.S. fiscal stimulus in the offing and little government handle on the outbreak.

Fed fails to avert panic over coronavirus impact with no concrete U.S. fiscal stimulus in the offing and little government handle on the outbreak.