If you travel Laos asking about the coronavirus, the most common response is an assured smile: “There’s no coronavirus here.” But dig a little deeper, hang out with the village women, passing babies, and you’ll find fear and rumors.

Speaking on condition of anonymity, villagers living near a Chinese construction site said they heard one of the workers there was infected. The rumors get wilder the nearer you get to the capital city, Vientiane. Speak to folks around there, and they’ll say it’s a government cover-up, telling tales of shady organizations worthy of the most deranged subreddits. 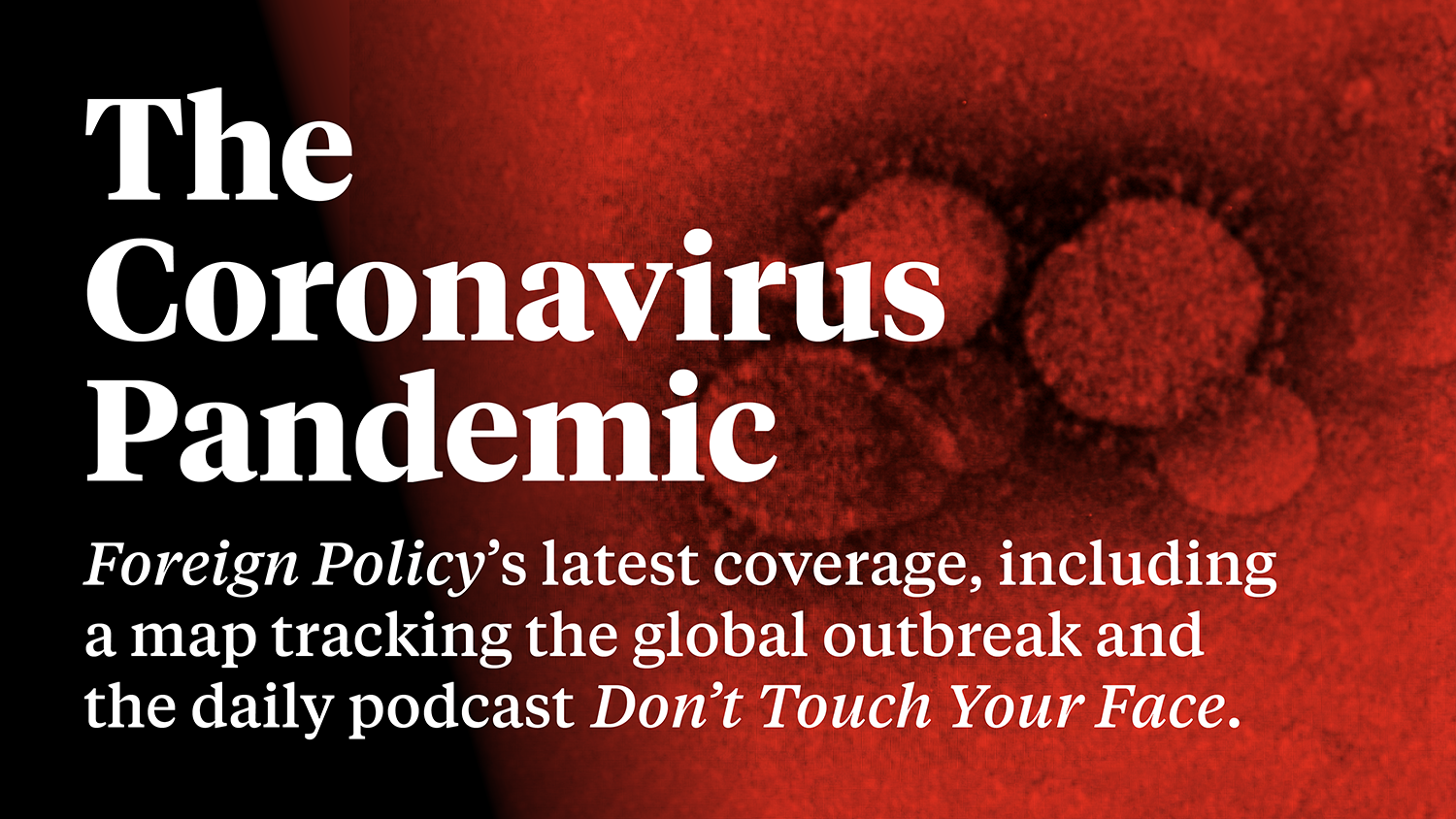 The Laos government has yet to confirm a case of the virus in the landlocked nation that borders China, Myanmar, Thailand, Cambodia, and Vietnam. A leaked document from the coronavirus task force said the government has checked 85 suspected cases, with 81 coming back negative. The final four cases were awaiting results at the time of writing.

On Monday Laos announced new rules for people entering the country including self-quarantine for people arriving from nations with more than 100 cases. Officials are hoping to remain one of only two Southeast Asian nations that has no confirmed cases, along with Myanmar. 53 suspected cases tested negative earlier this month.

“I’m worried there’s a hidden epidemic,” said one doctor from Luang Prabang—a UNESCO World Heritage Site visited by 655,000 tourists in 2018, about one-quarter of them Chinese.

However, the opaque nature of the communist government has led people to question official statements and reports in the state-controlled media. “All TV, radio, and printed publications are strictly monitored and controlled by the Lao government. The constitution prohibits all mass media activities that run contrary to ‘national interests,’” according to Human Rights Watch.

Government control was extended to include social media in a 2015 cybercrime law that forbids “Causing Damages via Online Social Media.” Indeed, a woman was arrested in February for posting rumors on Facebook that people infected with coronavirus were shopping at a mall in Vientiane, according to a Radio Free Asia report. Given the fraught nature of reporting in Laos, all sources in this article spoke under condition of anonymity.

“I’m worried there’s a hidden epidemic,” said one doctor from Luang Prabang—a UNESCO World Heritage Site visited by 655,000 tourists in 2018, about one-quarter of them Chinese. “Provincial hospitals do not have equipment to test people and they might only refer the worst cases to laboratories in Vientiane.” 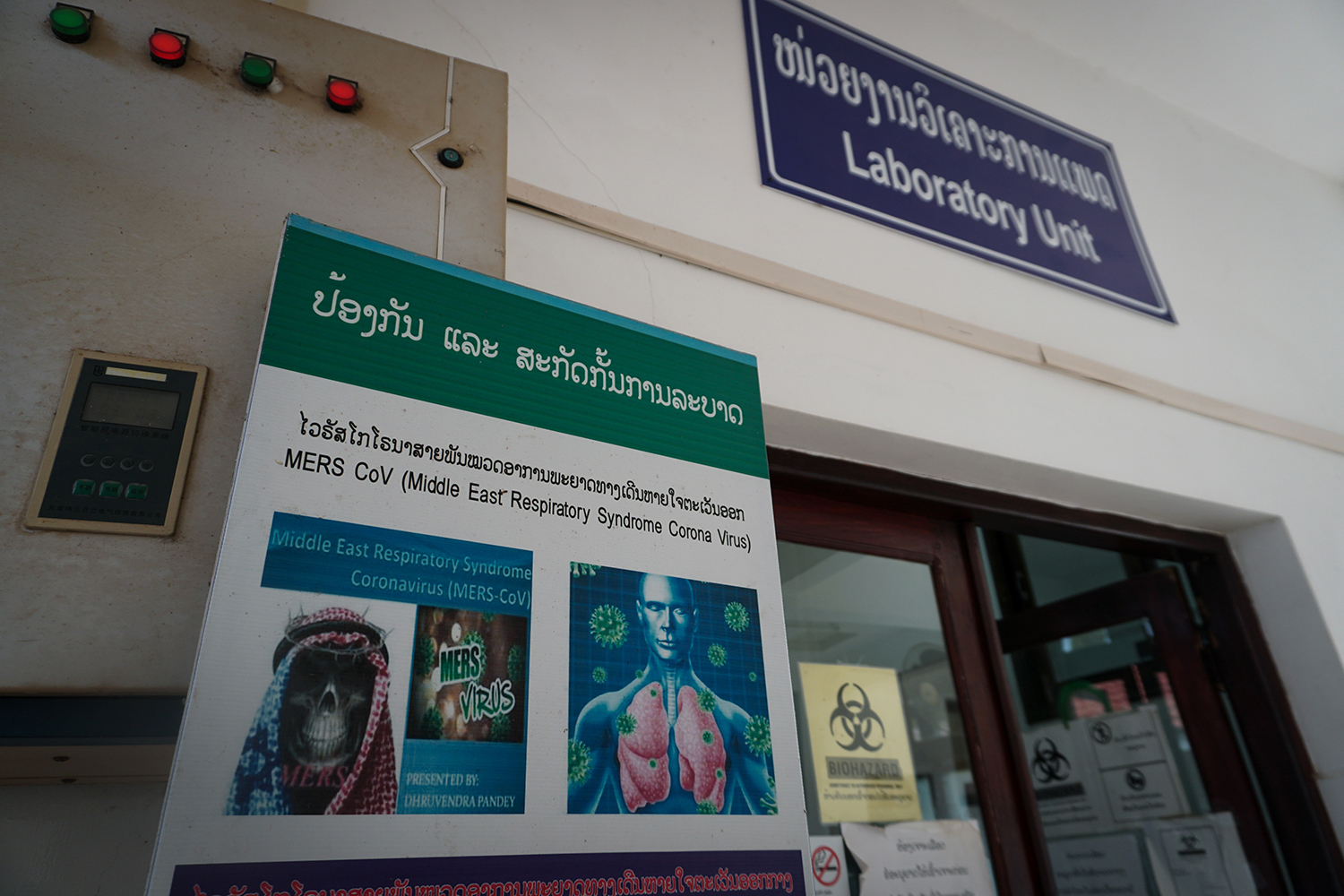 A warning poster outside a testing laboratory at a hospital in Laos on March 3. The government is slowly expanding its ability to test for coronavirus to provincial hospitals, but some doctors fear that cases are still going undetected.Nathan Thompson for Foreign Policy

A staffer at a health nongovernmental organization said the organization wasn’t testing patients for the virus because it was not its modus operandi. “The treatment for coronavirus is basically the same as other respiratory diseases so we just treat the people who come in.” The staffer said the NGO doesn’t have equipment to test for the virus.

As in other nations, panic and hoarding masks has been a problem. “We went through 500 masks a day,” the staffer said. “People were stealing them. So now masks are kept under lock and key.” Worse, when news of the virus first hit, people were scared to seek treatment for fear of getting infected. “For two weeks there was a big drop in patients and that meant some people didn’t get the treatment they needed. Some may have died as a result,” the staffer added.

At a hospital in northern Laos, a doctor said he hadn’t confirmed any cases. However, his institution only received a polymerase chain reaction testing kit in late February; before then it was sending samples to laboratories in Vientiane. “I have tested seven people in the past two weeks, all exhibiting high fevers, and none were coronavirus,” the doctor said.

“There are no cases in Laos so far because we have had good government outreach via television, radio, and via village leaders encouraging people to stay at home and not to travel,” the doctor said. “Also, the weather has been good and dry and we have a low population density.”

“Seasonality”—how weather conditions affect a virus—is unknown for coronavirus. However, a recent study by a team of American and Iranian researchers points out that the largest outbreaks of the virus are all on similar latitudes. “The distribution of significant community outbreaks along restricted latitude, temperature, and humidity are consistent with the behavior of a seasonal respiratory virus,” the March 5 study said. 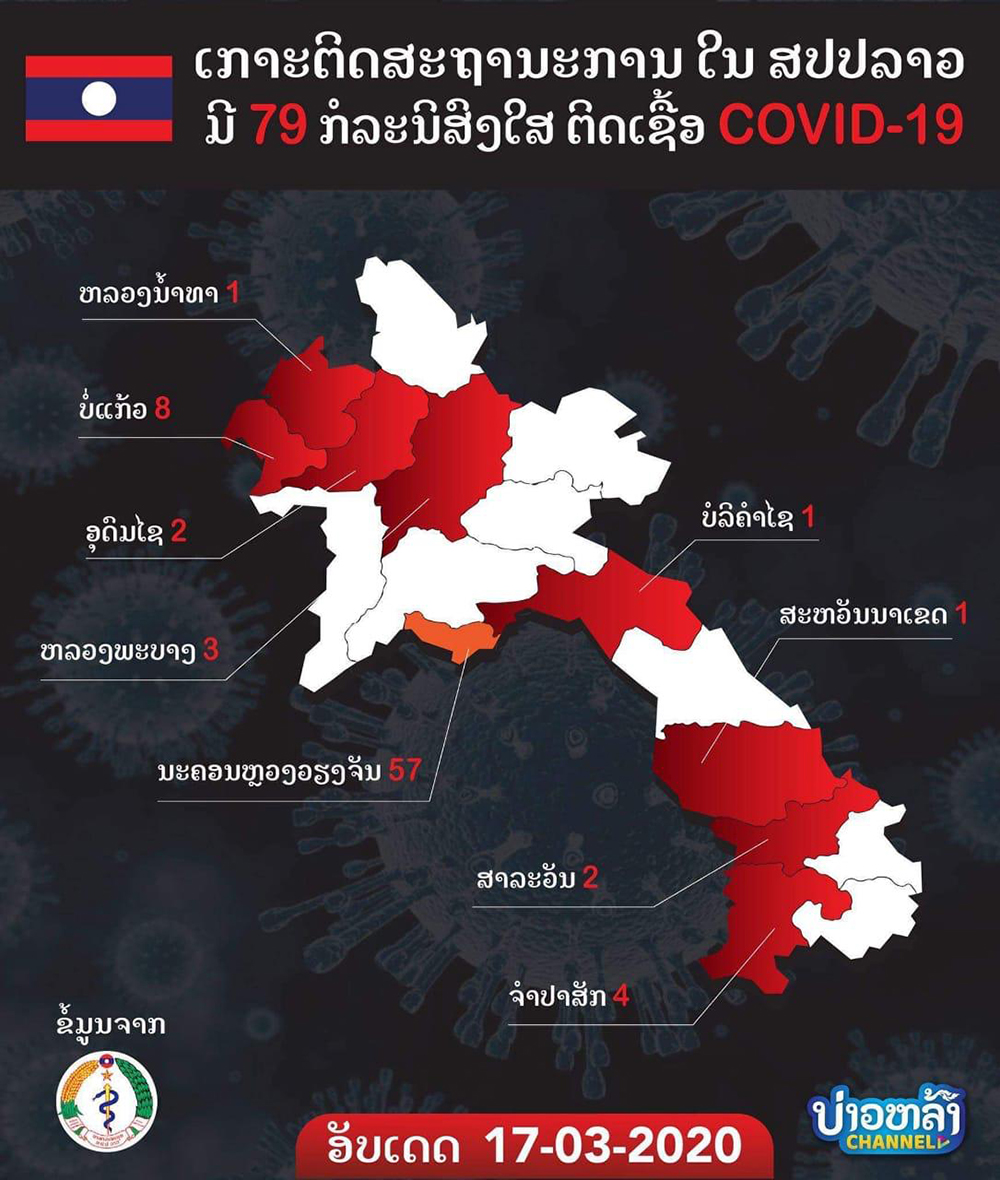 This graphic, published by the Laos Ministry of Health on March 17, shows how many suspected cases have been tested by province. Laos has reported no cases of coronavirus so far, but doctors and citizens question the nation’s testing capabilities.laos ministry of health

As for population density, the doctor might be on to something. Laos has an estimated population of 7.3 million in an area about the size of the United Kingdom. Some 64 percent of Laotians live in rural settings, according to Worldometer. And in some provinces more than 20 percent of communities don’t have road access. A source at an international health NGO said the low population density could be a key reason why the small nation has not reported any cases.

There was a brush with the virus when Chinese tourist Zhang Biao visited Vang Vieng and Luang Prabang on Jan. 27 and 28. He was found to have the virus upon his return to China, according to a Feb. 2 missive sent by the Chinese consulate to medical officials in Laos.

Furthermore, a doctor in Luang Prabang said he treated a young Dutch woman for a high fever on March 2. Medical officials quarantined her overnight while samples were sent to Vientiane. The tests came back negative for coronavirus and the woman flew home the next day. Little is known about her itinerary before entering Laos, and attempts to contact her were unsuccessful.

As for the Chinese workers building the $7 billion railway connecting the Chinese city Kunming to Vientiane, most never returned after Chinese New Year that fell on Jan. 25, according to a Laotian worker at a construction site near Oudomxay. “Now we can only do basic tasks because the technical aspects were handled by the Chinese.”

His friend was concerned about the disease. “If they come back, we might quit,” he said. “We’ll find work building houses so it’s less risky.” At several other construction sites on the gigantic railway, housing for Chinese workers stood empty. Villagers nearby also said the workers never returned after Chinese New Year. 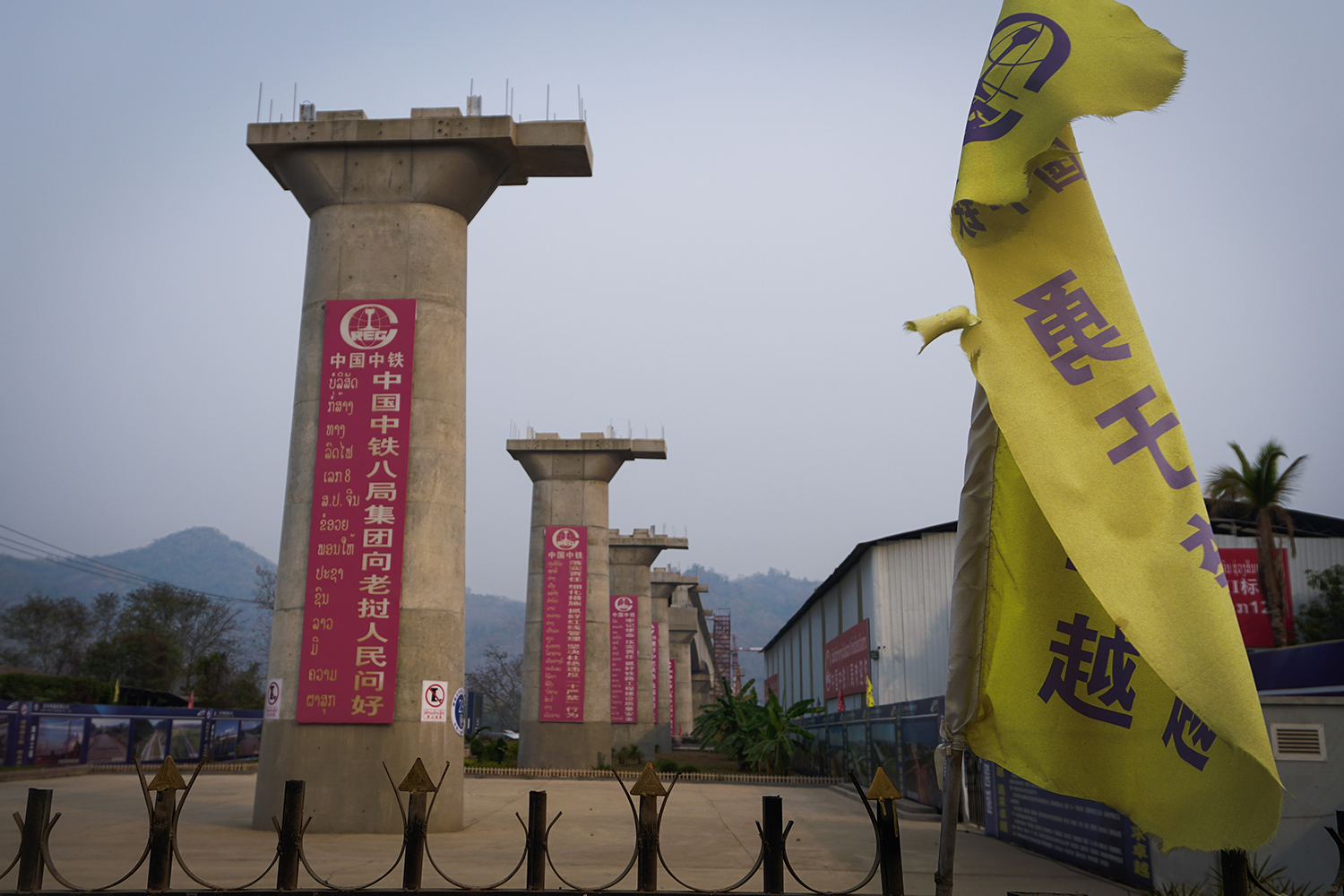 Pillars for the Kunming-Vientiane railway on Feb 28. Progress on the Chinese-funded railway that will run through much of Laos has slowed as Chinese workers stay home to prevent the spread of the coronavirus. Nathan Thompson for Foreign Policy

The Kunming-Vientiane railway is part of China’s Belt and Road Initiative and would eventually connect all the way to Singapore via Bangkok. Laos is depending on China to bankroll this project, as well as funding its ambition to become the “battery of Southeast Asia” by building dozens of dams and selling excess electricity to underpowered neighbors such as Cambodia.

Ties with Beijing are among Laos’ most important geopolitical relationships. Some have pointed to this as a complicating factor when dealing with the virus that originated in Wuhan, China. The friendship goes both ways. China Global Television Network posted a song composed by the director-general of the Lao People’s Revolutionary Youth Union’s Central International Department. “We are friends. We share the same future,” he sung.

Also complicating things is Laos’ portfolio of respiratory diseases that have symptoms very similar to COVID-19. “In Lao PDR, a high diversity of bacterial and viral respiratory pathogens are circulating among the population,” said a 2017 study by Institut Pasteur du Laos. Misdiagnosis in underequipped rural hospitals is “a concern that must be addressed by the government,” the doctor in Luang Prabang said.

Officials did test villagers in Phongsaly province in February when two women and an infant died from a respiratory illness. The results came back as influenza. The hill tribes who populate the northern provinces of Laos have little immunity to strains of the flu, making them extremely vulnerable if exposed to COVID-19.

The Boten Special Economic Zone on the Chinese border is the scene of a large development as part of the Kunming-Vientiane railway. Reports have said that work there has completely stopped due to the virus, but I observed a small number of trucks moving earth while heavy diggers stood idle. There were also small numbers of container lorries still crossing.

A security guard took my temperature upon entering an empty duty-free shop in Boten. A Chinese staffer inside smiled and said there was no cause for concern because of stringent checks on the Chinese side of the border. On the Laos side, an empty quarantine area was prepared.

But now that the outbreak is wordwide, Laos has closed more than a dozen small border crossings with Vietnam and Cambodia, and pressure is mounting for schools to be closed. Two private schools closed this week with more waiting for government to give the word. While Laos has apparently escaped infection so far, panic and paranoia are spreading. Fewer people are buying the government’s story. Whatever the truth, the idea that even this backwater nation can escape is looking increasingly improbable.

Biden Must Rethink the American Way of War