MATAMOROS, Mexico—At the unofficial refugee encampment in Matamoros, Mexico, hundreds of tents and tarp shelters stretch along the banks of the Rio Grande. The scent of burning wood wafts into the air. Here, about 2,500 asylum-seekers live cheek by jowl below the shadow of the border wall. An American flag waves above a slinky of razor wire behind the border fence. A tantalizingly short swim away lies Brownsville, Texas.

A few hundred yards south of the border crossing is a memorial to Óscar Alberto Martínez Ramírez and his 23-month-old daughter, Angie Valeria, who drowned attempting to cross the river in 2019. Those living along the border are no stranger to death: Several asylum-seekers have died trying to cross the river, and hundreds of migrants have died in the desert trying to reach the United States. But they have never experienced a pandemic. 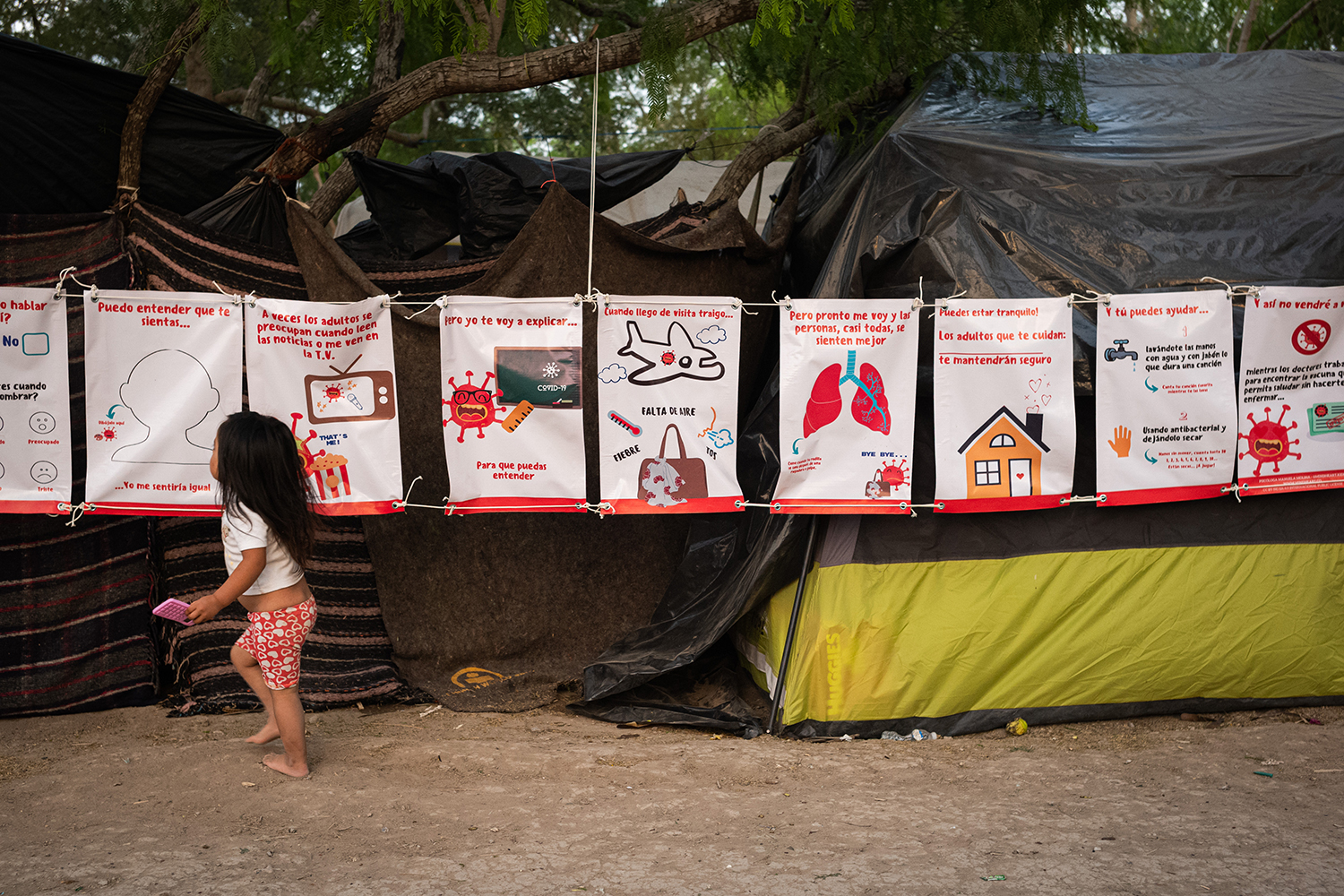 A girl runs past a series of signs explaining how the coronavirus spreads at the Matamoros refugee camp on March 19. Ivan Flores for Foreign Policy 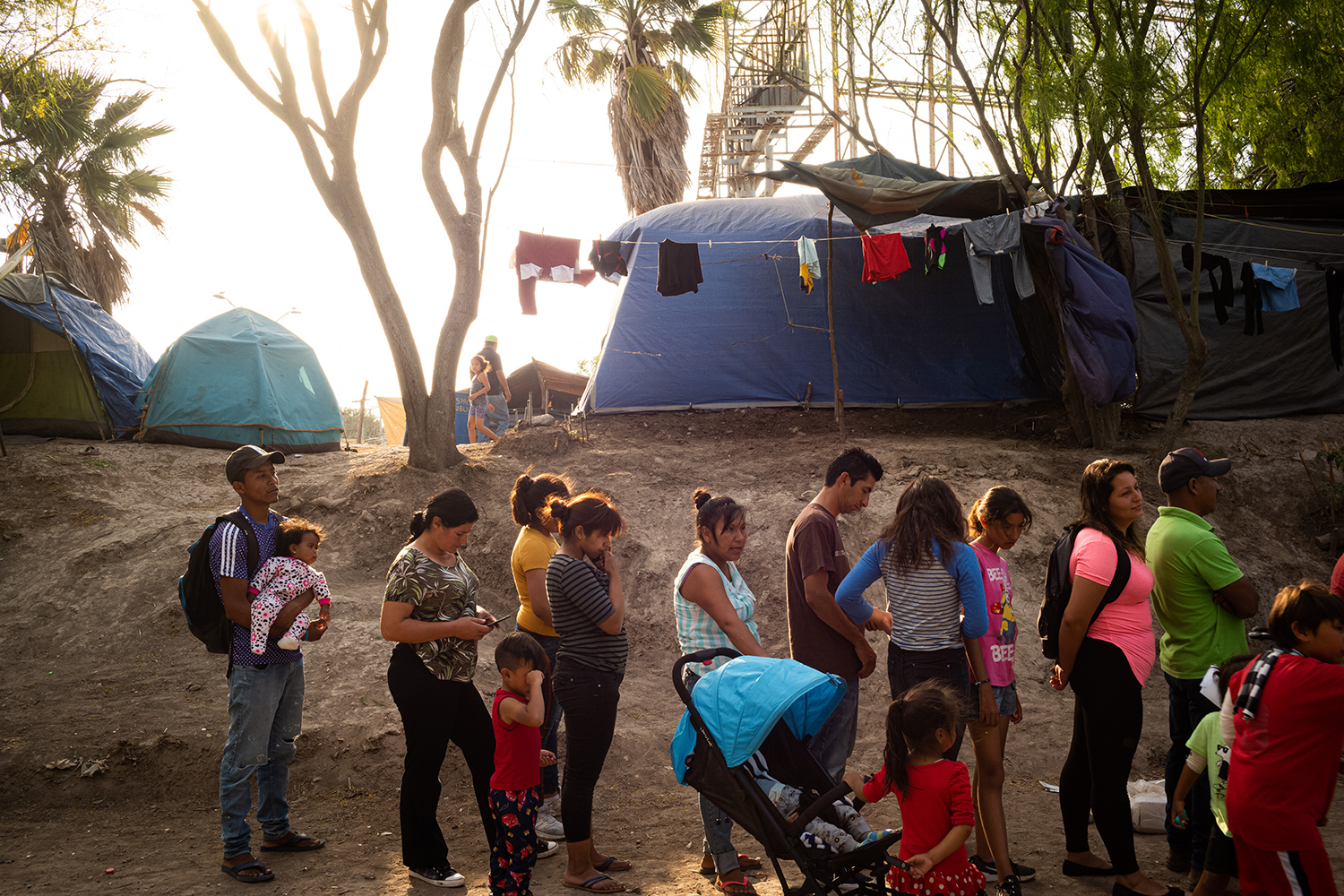 Migrants wait in line for food distribution at the Matamoros camp on March 19. Food was previously given out in a centralized tent but is now distributed at separate locations in the camp to prevent large gatherings. Ivan Flores for Foreign Policy

Refugees living along the U.S.-Mexico border are struggling to prepare for the imminent and inevitable arrival of the coronavirus. In the tightly packed Matamoros camp, social distancing is impossible, and high-level health care is inaccessible. The Trump administration’s Migrant Protection Protocols (MPP) require asylum-seekers to remain in Mexico while their claims are processed, placing them in an especially vulnerable situation. Should they become sick, they cannot cross the border into the United States, and Mexico does not have enough hospital beds. In Matamoros, only 10 ventilators and 40 intensive care unit beds are available.

The camp currently does not have any confirmed cases, according to Global Response Management (GRM), a medical aid group that is providing relief in the makeshift camp. But that fact hasn’t dampened efforts to prevent the virus from entering in the first place. 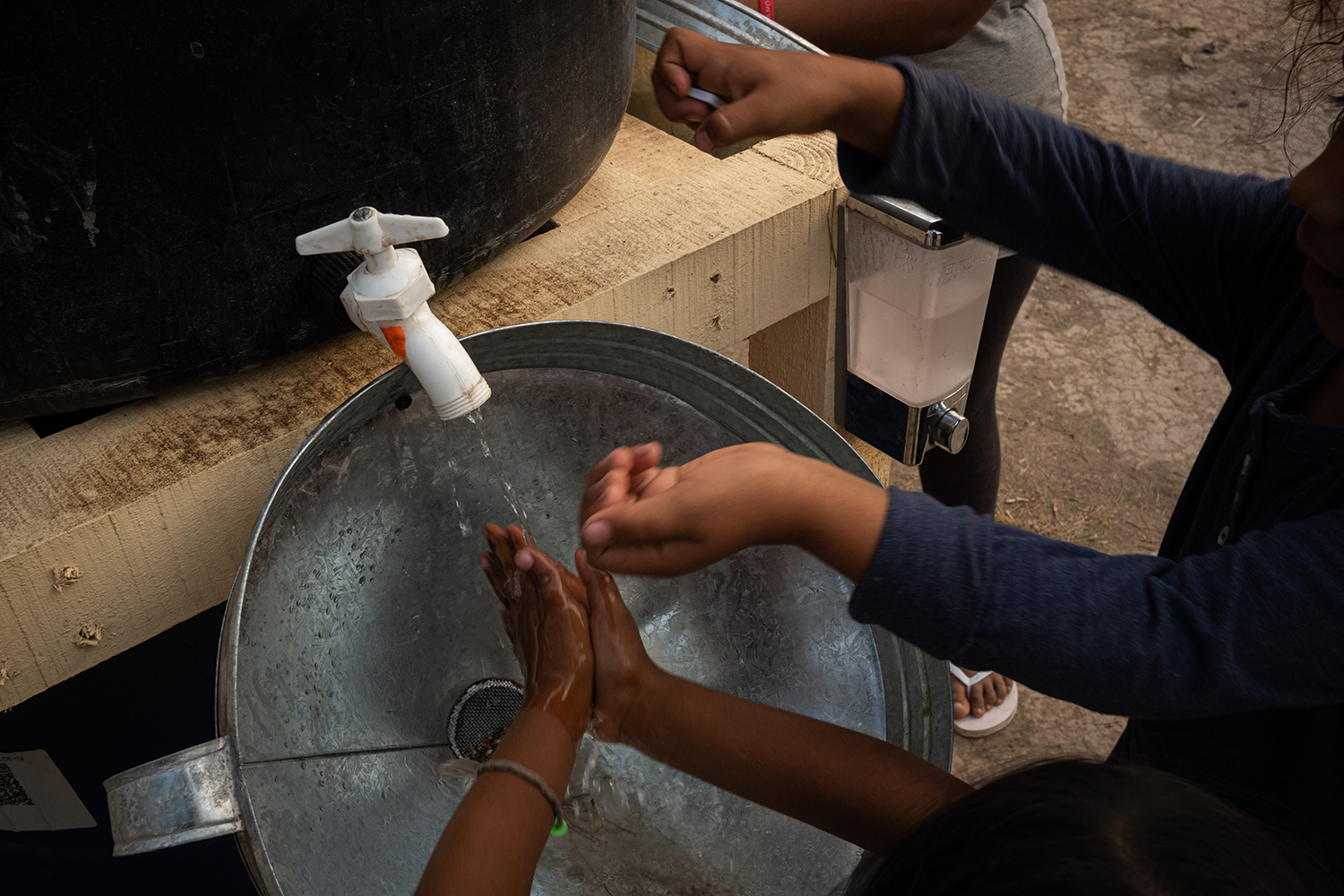 Children wash their hands at a makeshift station in Matamoros on March 19. There are several hand-washing and hand-sanitizing stations scattered throughout the camp. 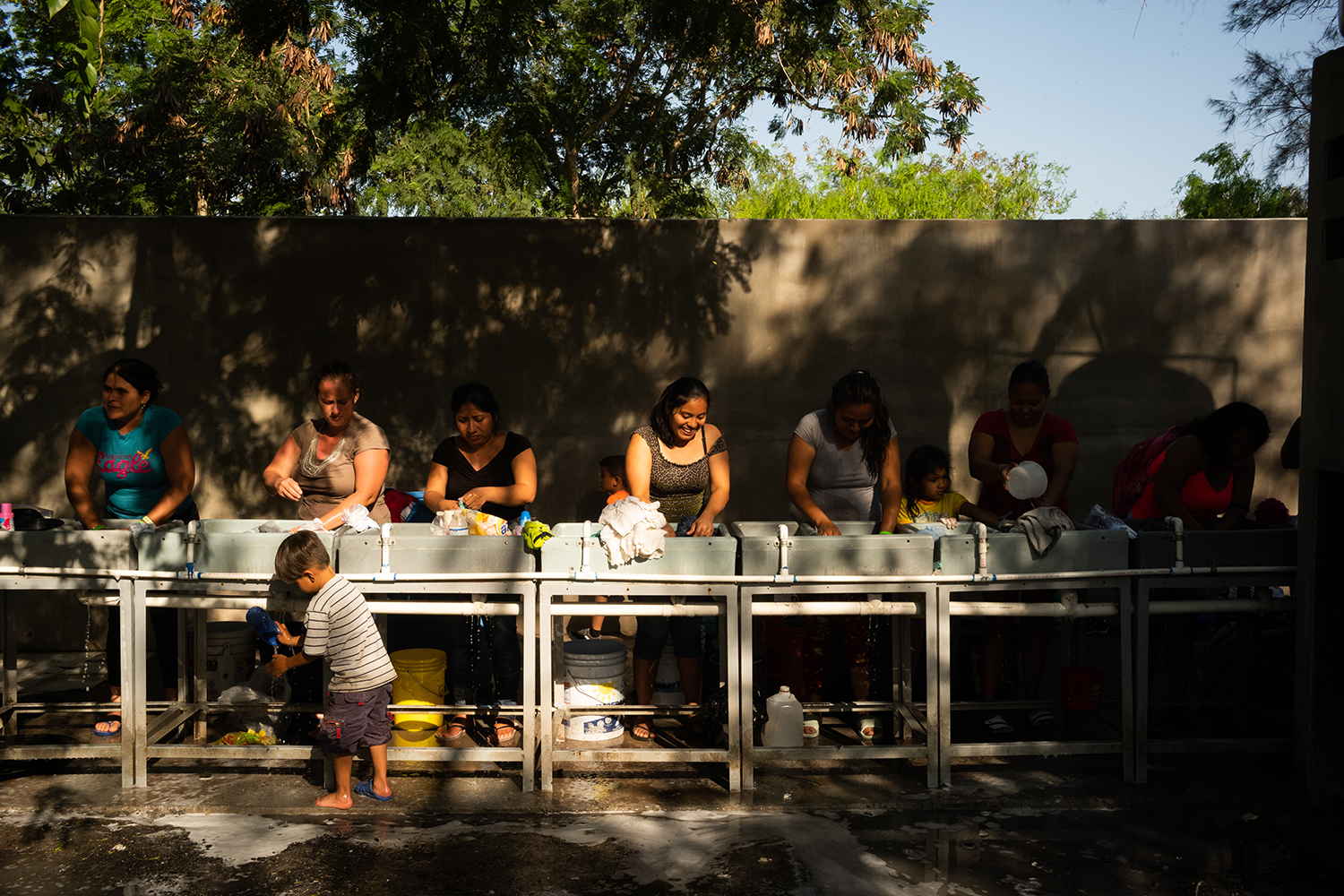 Migrants wash their clothes at one of several stations built throughout the Matamoros camp on March 18.

Hand-washing and hand-sanitizing stations have been set up throughout the camp, as well as signs, painted by volunteers, explaining how the virus travels. Dairon Elisondo Rojas, a doctor, runs a lecture circuit through the camp explaining what the virus is and how to prevent its spread. Elisondo is himself an asylum-seeker from Cuba and works with GRM in its clinic. His specialty is in critical care, and he worries that if the virus “gets in here, we’re finished. … If it reaches, the camp will deteriorate quickly, and it will be fatal.”

The camp is broken down into sections based on nationalities. During one of the lectures, Elisondo asked everyone to sleep head-to-toe in their tents to avoid breathing on one another and to keep their tents open to allow a cross breeze. Surrounded by the refugee community and standing on a slight embankment, Elisondo spoke to the crowd frankly about the dangers of the virus. He asked that if anyone gets ill, they send a runner to the clinic to limit exposure to the rest of the camp; if multiple people are ill or coughing, they should be moved together. Most already live in groups of two or more in a tent.

There are criteria that need to be met before GRM would isolate a patient: a fever, cough, and a negative flu test. If a patient meets the criteria, they are isolated—as much as is possible in the camp. There are plans to stand up a 40-bed field hospital south of the main encampment, but as of this writing, the hospital has not been built. Medical staff at GRM do not have access to coronavirus tests. 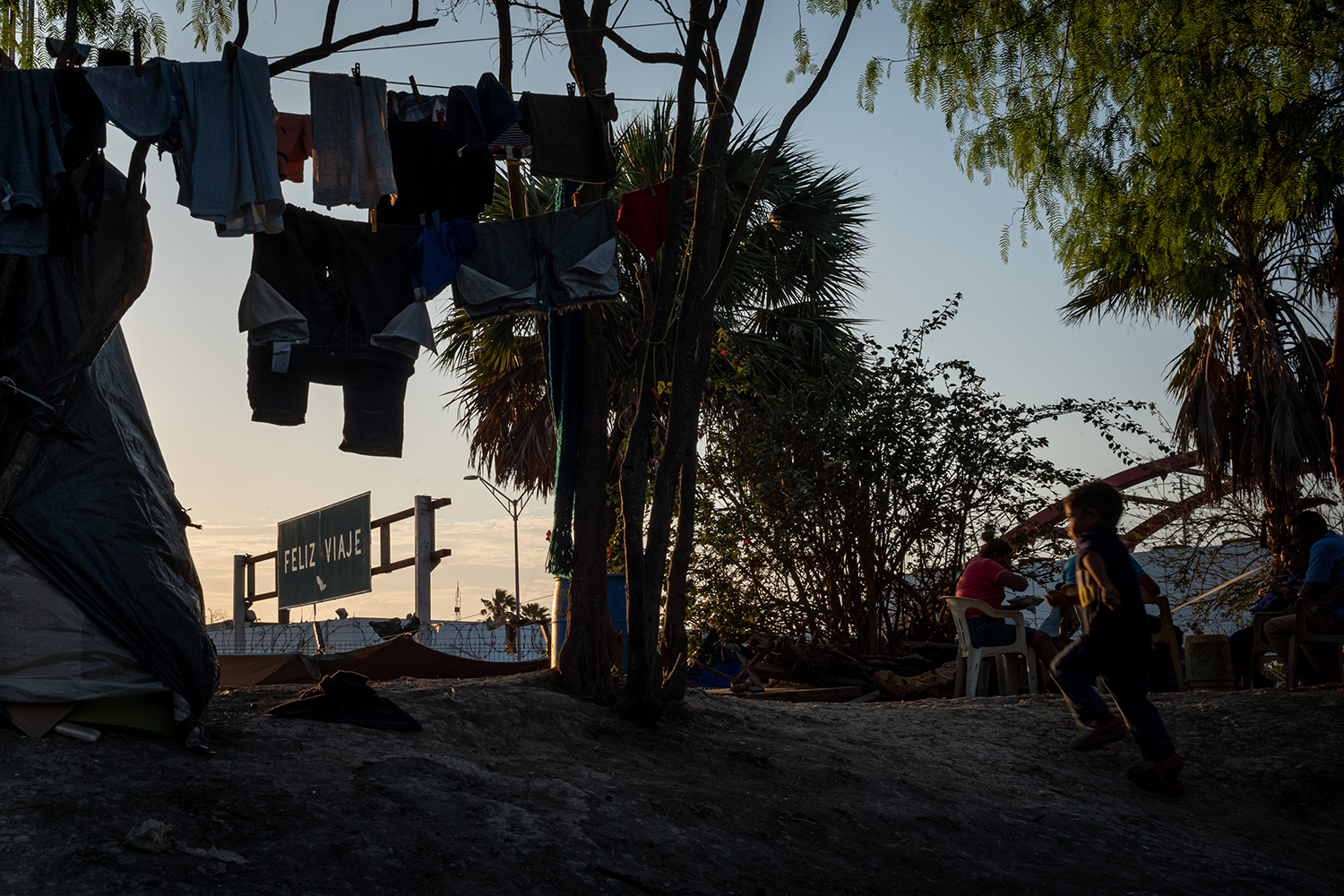 A child runs up an embankment in the refugee camp in Matamoros on March 18. A sign over the road that leads to the nearby U.S. border crossing wishes people a good trip. Ivan Flores for Foreign Policy 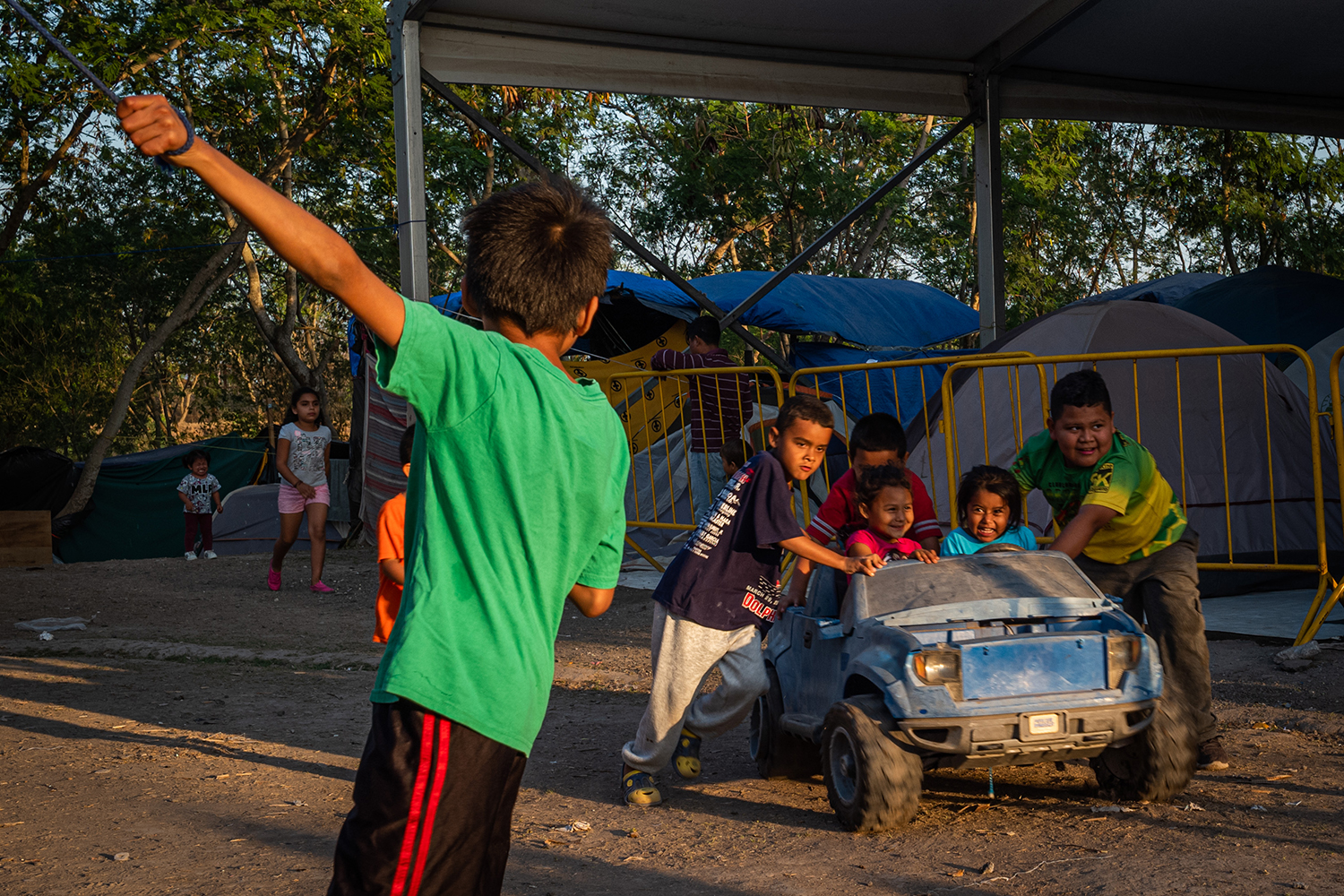 Children pile on to a toy truck as they push one another around the U.S.-Mexico border camp on March 18. Ivan Flores for Foreign Policy

For asylum-seekers trapped in Mexico under MPP, the coronavirus is just another in a series of challenges. Some said they were less worried about getting sick than the likely impact the pandemic will have on their asylum cases. David, a migrant from Honduras, said the biggest problem isn’t the coronavirus but the response to it. “What I’m worried about the most is if they stop the program, I think the border is going to close. I heard that they are going to shut down the programs.”

On March 21, U.S. President Donald Trump partially closed the border to nonessential travel. Asylum-seekers here have yet to learn whether their hearings will be considered “essential.” However, the border appeared to remain open along the crossing. When asked about any new directives, Customs and Border Protection officers responsible for checking identification on the bridge said they still had not received a directive regarding the closures, despite it being days after the order went into effect. 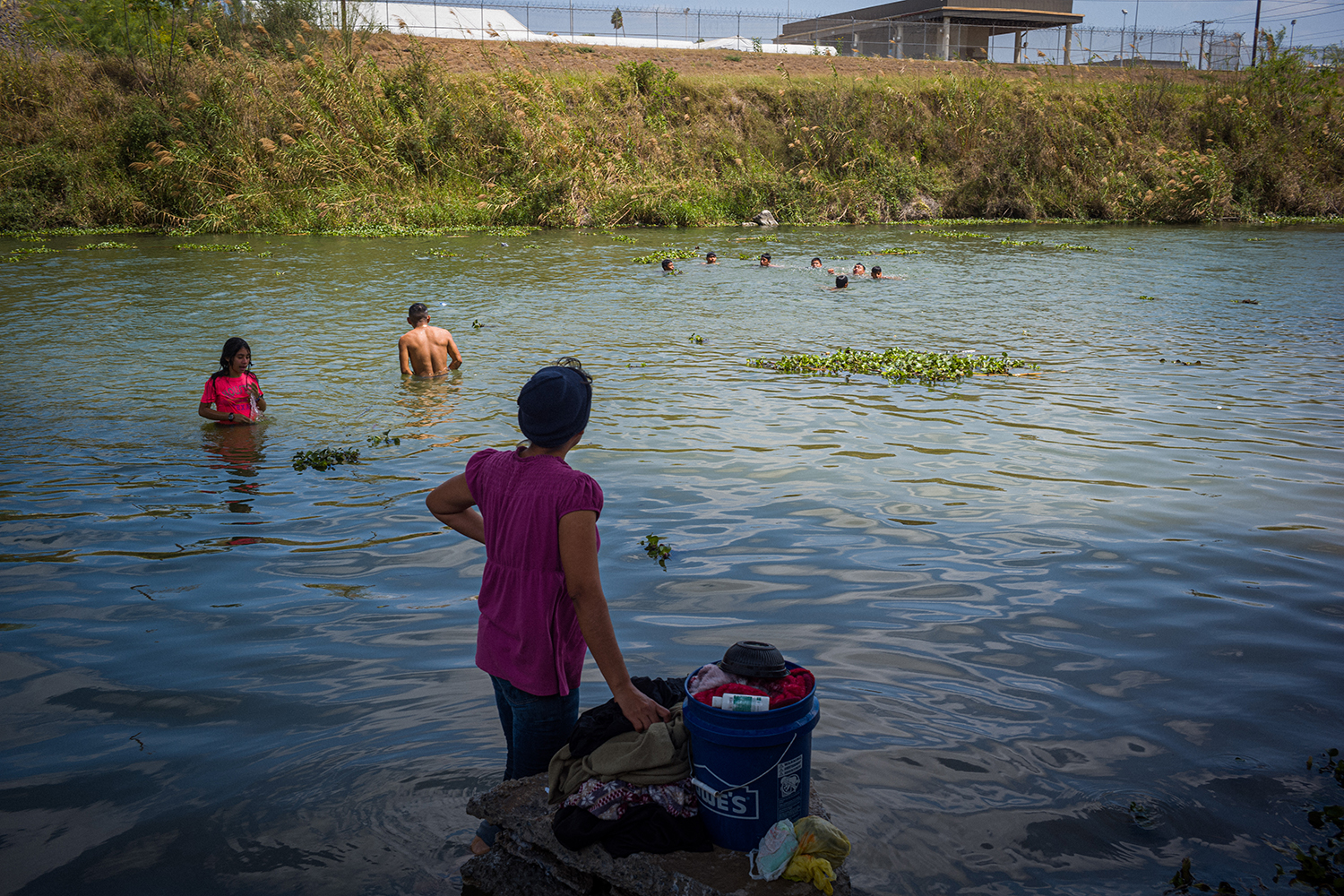 A mother looks out to her children as they swim in the Rio Grande, near Matamoros, while she does laundry on March 18. Ivan Flores for Foreign Policy

According to an immigration attorney who works on asylum cases but is not authorized to speak to the media, “it sounds like at least some judges are issuing blanket orders and rescheduling some MPP hearings.” Several asylum-seekers Foreign Policy spoke with reported that their cases had been delayed. On March 23, the Department of Homeland Security released a statement saying that all hearings scheduled through April 22 will be rescheduled for a later date. This information seems to be changing day to day.

“If they shut the border, people will be stuck here and they can’t have their cases processed,” Elisondo said. “The conditions here are not good, even if you’re healthy.”

You Can’t Practice Social Distancing if You’re a Refugee

Around 70 million people are suffering displacement in crowded camps, awaiting the arrival of the coronavirus pandemic.

U.N. and relief agencies warn the coronavirus pandemic could leave an even bigger path of destruction in the world’s most vulnerable and conflict-riven countries.