Waiting for Peace on the Front Lines

As political divisions hold up talks with the Taliban, Afghan forces are paying the price.

In late November 2019 in Nahr-e-Saraj, a contested district in Afghanistan’s Helmand province, Afghan Border Police (ABP) Col. Ahmad Sagoori, 36, draped a heavy woolen blanket over his uniform. Helmand is hot in the summer, but the evenings had turned crisp. Twenty days earlier, Sagoori and his men, along with local police, retook the sparsely populated agricultural district from a group of local Taliban militants, who frequently reappeared to harass the outpost with sporadic sniper fire.

“If the politicians can’t address the bigger issues in our country, there will be no end to this war.”

Despite the ABP forces being severely undermanned, the Taliban concentrated recent attacks on the local police, who have less training and equipment, making them easier targets. “Now that we’ve pushed them out of the district center, we’re able to hold the area much more effectively,” Sagoori said. Though it seemed that the tide of the war was beginning to turn in favor of the government forces, the colonel didn’t see a long-term military solution.

“Afghanistan is tired,” Sagoori said softly—a sentiment echoed by many Afghans, soldiers, and civilians alike. He said only a political solution could bring about lasting change for Afghanistan. In September, peace talks between the United States and the Taliban to end the 18-year war had broken down. “The Taliban in this area are scared of us, and we have a good fighting reputation here. We have good men, good weapons, and the people in the villages support us,” he said. “But if the politicians can’t address the bigger issues in our country, there will be no end to this war.” 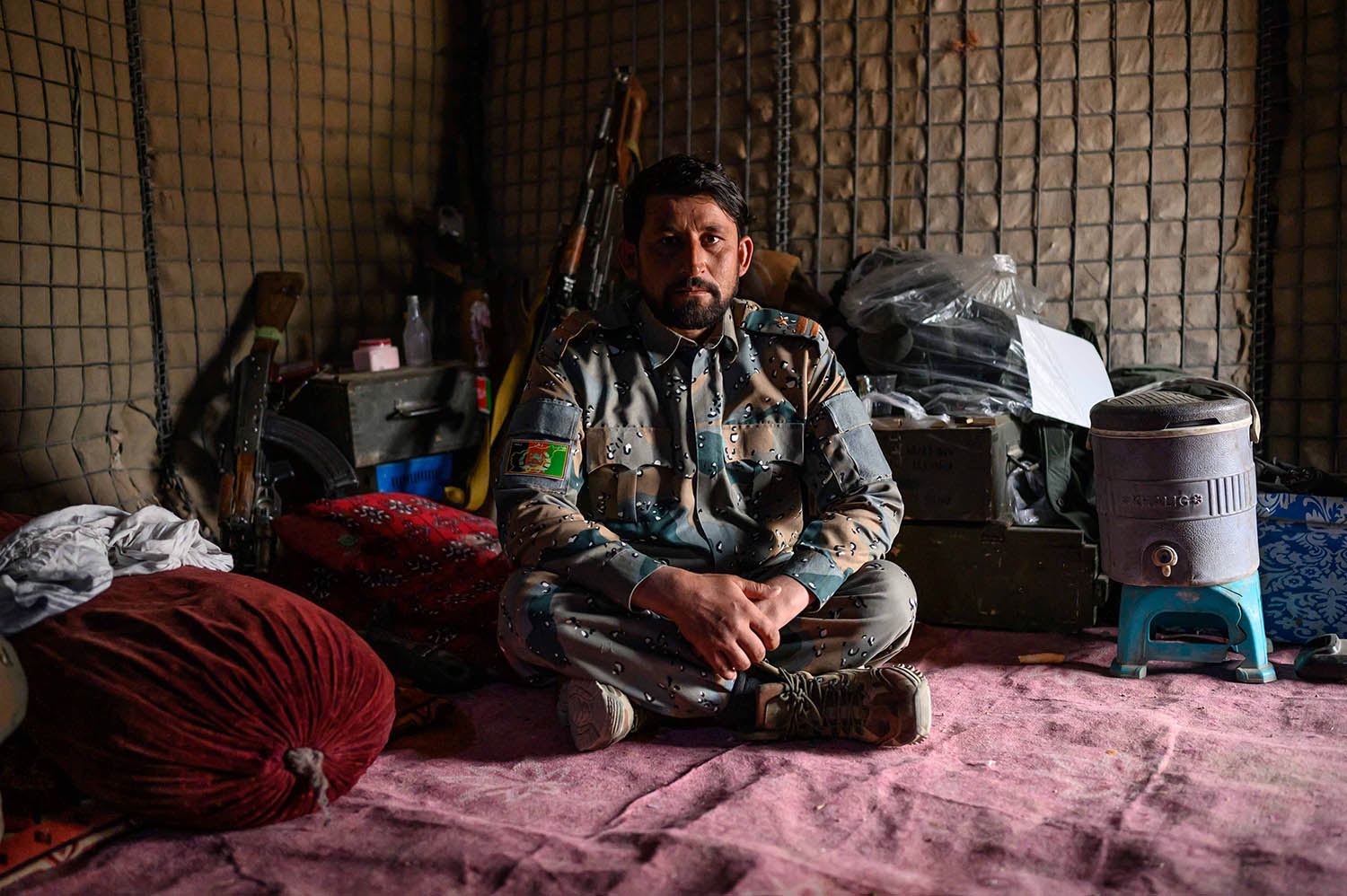 ABP Col. Ahmad Sagoori, 36, sits in the storage room of his small outpost in Nahr-e-Saraj district, in Helmand province, on Nov. 20, 2019. Kern Hendricks for Foreign Policy 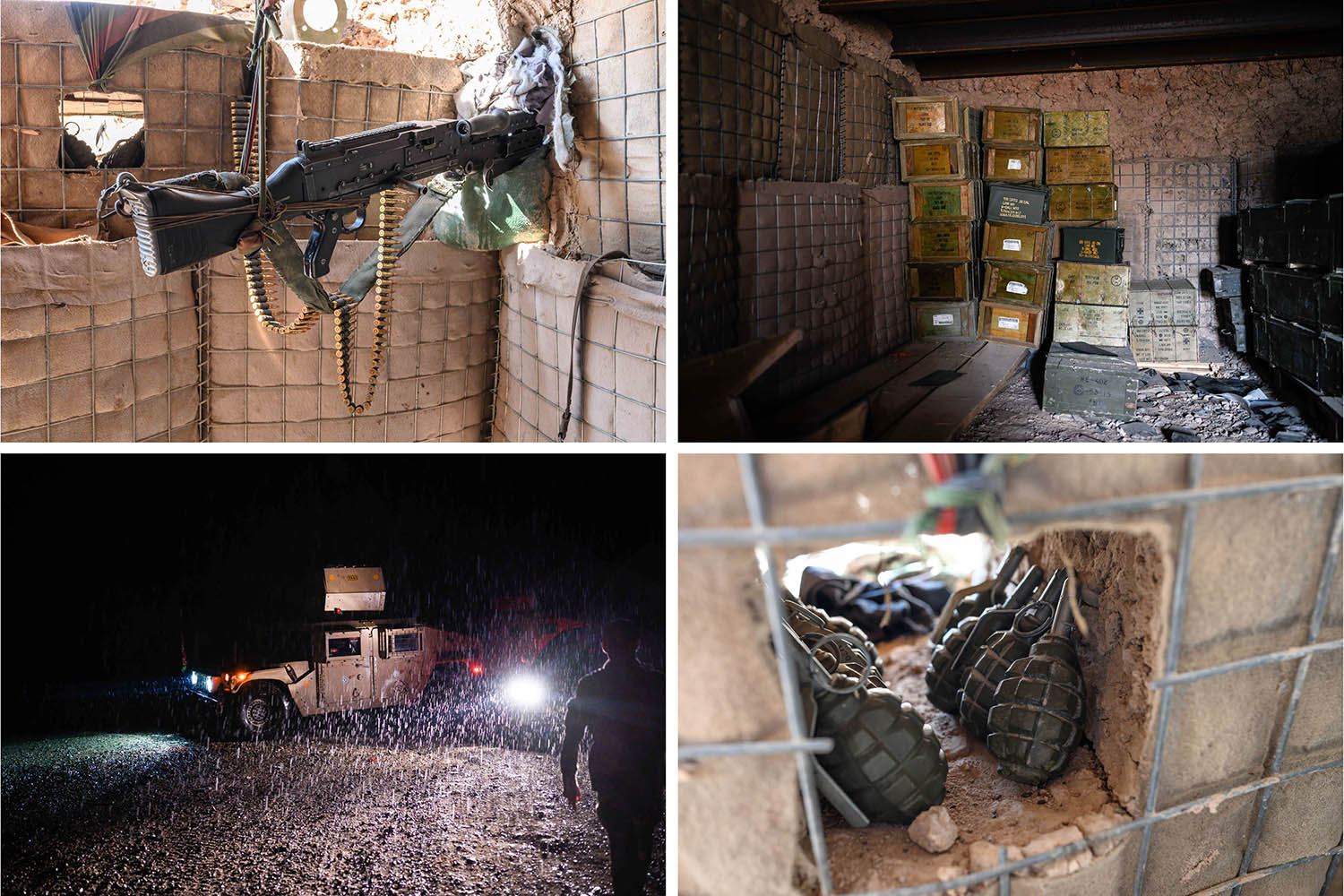 Top left: A machine gun sits ready for use at a small ANA outpost in Jowman district, Helmand, on Nov 19, 2019. Top right: Stores of ammunition and supplies for the ANA’s 215th Corps, located just outside Lashkargah, the capital of Helmand province, on Nov. 19, 2019. Bottom left: An ANA Humvee waits for soldiers in the rain during a night patrol in Jowman district on Nov. 21, 2019. Taliban attacks on these patrols are a regular occurrence, particularly at night. Bottom right: Hand grenades sit ready for quick use at an ANA outpost in Jowman district on Nov. 19, 2019. Kern Hendricks for Foreign Policy

In the months since, Afghanistan’s hopes for peace seemed to be nearing reality. In February, U.S. and Taliban negotiators agreed to a seven-day reduction in violence, a precursor to a formal deal. Although far from violence-free—at least 22 soldiers and 14 civilians were killed—the period was hailed as a success. On Feb. 29 in Doha, Qatar, U.S. envoy Zalmay Khalilzad and Taliban political chief Mullah Abdul Ghani Baradar signed a peace deal, the culmination of 18 months of on-and-off negotiations—a historic step.

But before the deal was signed, cracks were beginning to emerge that have widened in the weeks since. Taliban attacks against government forces have increased to pre-reduction of violence levels. In the two days after the announcement, more than 40 government soldiers were killed in Taliban attacks. On March 19, Afghanistan’s acting defense minister, Asadullah Khalid, announced that he had ordered ANA troops to resume defensive positions. The violence continues. On March 29, Taliban attacks killed at least 27 Afghan service members across the country.

Taliban attacks against government forces have increased to pre-reduction of violence levels.

Afghanistan’s government remains divided in the wake of the controversial presidential election in September 2019. Incumbent President Ashraf Ghani was declared the winner only in February. His main rival, Abdullah Abdullah, refuses to recognize his inauguration. Unless some power-sharing consensus is reached, the rift at the highest level of government makes a prospective deal between the Afghan government and the Taliban unlikely.

The two sides have already missed the March 10 deadline for the intra-Afghan talks to begin. The disputed prisoner swap of as many as 5,000 Taliban prisoners held by the government in exchange for 1,000 ANA prisoners—a move stipulated by the peace deal—remains on hold. While these political machinations continue, Afghan soldiers and civilians are paying the cost. 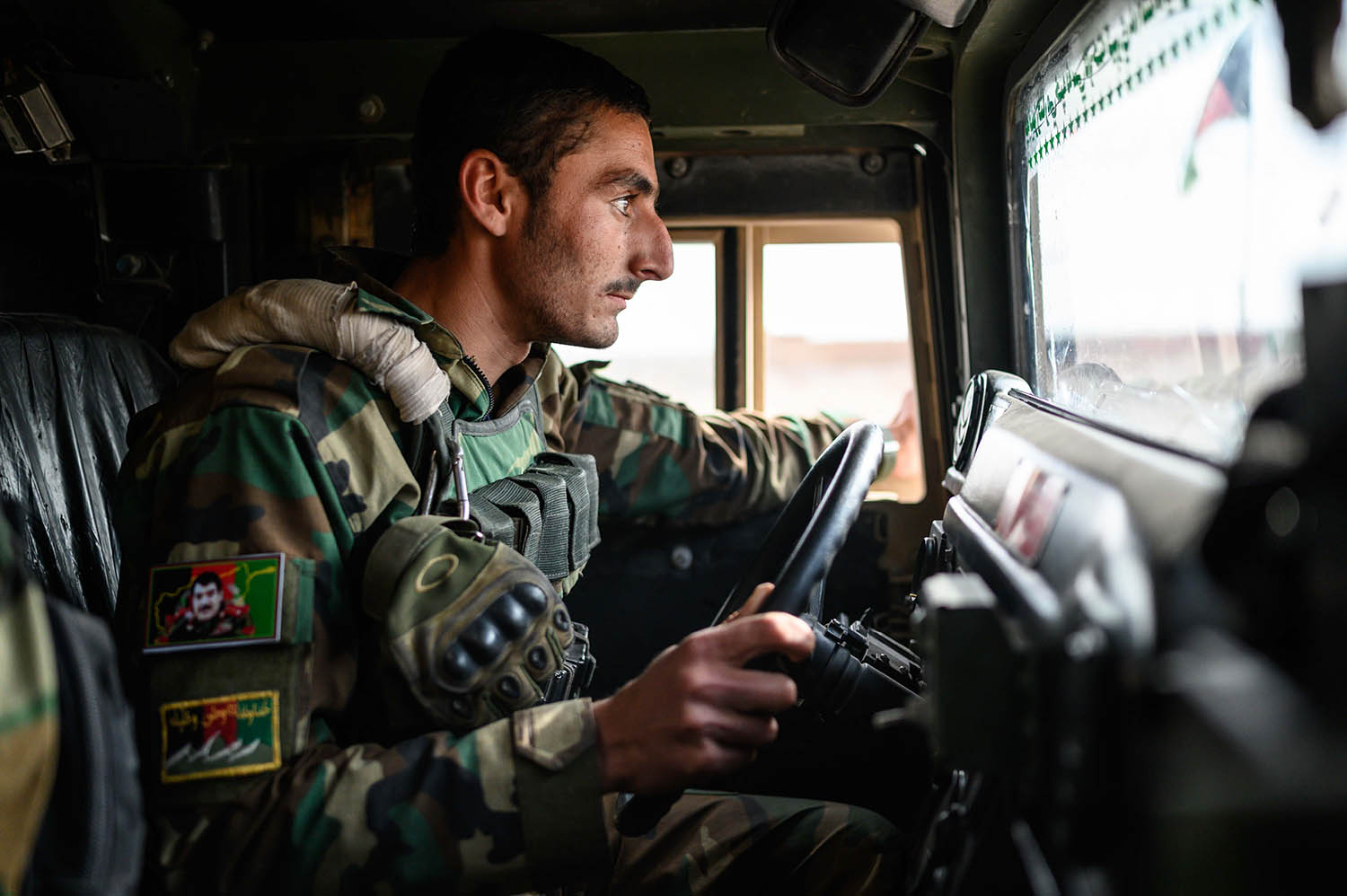 Hebaidullah Parwani of the Afghan National Army patrols with a convoy in Jowman district, along the main highway between Lashkargah and Kandahar, on Nov. 19, 2019. Kern Hendricks for Foreign Policy

A young generation of Afghan soldiers already bears the physical and psychological scars of the war. Many were infants when the United States invaded Afghanistan in October 2001. Hebaidullah Parwani, 21, is tall and rangy and carries an M4 rifle with an ornamental silver chain. He joined the Afghan National Army (ANA) in 2016 when he turned 18, along with other boys from his village in Paghman district, north of Kabul. “It seems like a long time ago now,” Parwani said. “I don’t think any of us knew what we were really signing up for or the types of things we would experience.”

Parwani is stationed with an ANA battalion east of Lashkargah, the capital of Helmand. He spends his days patrolling the local highway in an armored Humvee, investigating suspected improvised explosive devices (IEDs), and scanning the surrounding terrain for Taliban snipers. Guerrilla tactics like snipers and IEDs allow Taliban insurgents to inflict damage on government forces without exposing themselves to easy reprisals.

“I think fear is the most powerful weapon they have.”

In November, the soldier peered warily out of a peephole beneath the crumbling wall of his small outpost, where a year ago ANA troops dug an underground network of tunnels to provide a place to retreat in the event of a surprise Taliban attack. The challenges of fighting an often unseen enemy have taken their psychological toll on Afghan forces. “The front lines are not always clear in this fight,” Parwani said. “Our forces are too strong for the Taliban to directly confront us, so they mostly use snipers and IEDs in this area now. They attack and disappear and rely on creating fear in the minds of our men.”

Parwani’s experiences as a soldier have already left an indelible mark on him. Two months earlier, in early September 2019, a member of his unit was killed by a roadside bomb during a routine morning patrol. “I’ve lost many good friends,” he said. “Of course we need to continue with our patrols, but I don’t think I realized how much his death would affect me.”

“When the danger can come at any time and from any direction, it can have a powerful psychological hold over you. I think fear is the most powerful weapon they have.” 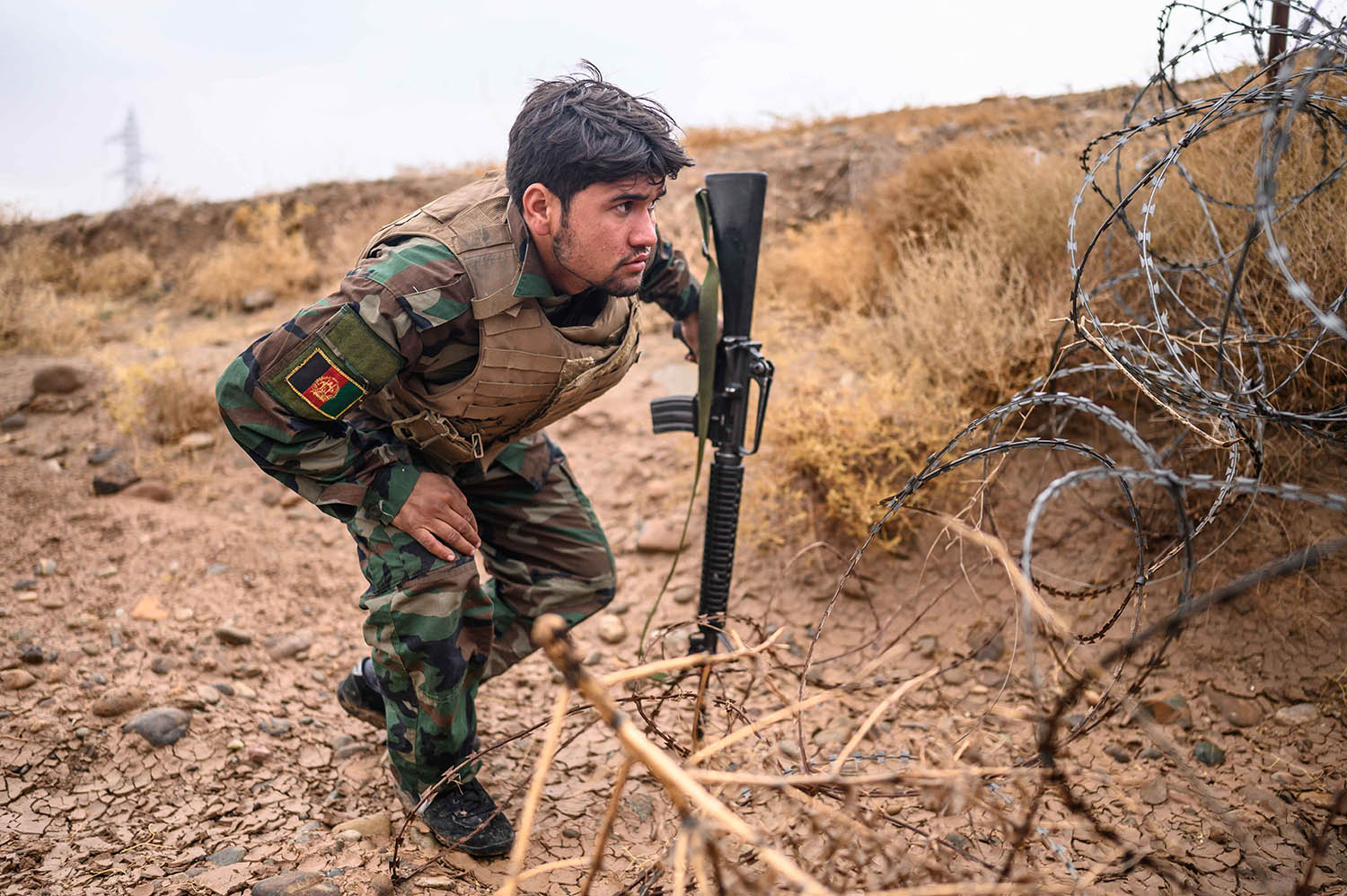 A young ANA soldier searches for improvised explosive devices (IEDs) in a culvert beneath the main Lashkargah-Kandahar highway on Nov. 21, 2019. IEDs remain one of the Taliban’s most commonly employed weapons in this area. Kern Hendricks for Foreign Policy

Despite the U.S.-Taliban peace deal, Afghanistan’s security situation remains unstable. But Afghans have had at least one glimpse of what a halt to fighting could look like. In June 2018, a historic but short-lived cease-fire agreement between the Afghan government and the Taliban offered a fleeting glimpse of peace. During the Eid al-Fitr holiday, both sides laid down their arms across the country. Uniformed government troops embraced Taliban fighters. The cease-fire ended after three days when the Taliban announced that they would resume operations against Afghan government forces. “We’ve already seen what happens when both sides agree to put down their guns,” Sagoori said. “During those three days, we had a taste of peace, but the Taliban returned to fighting, so we did too.”

“During those three days, we had a taste of peace, but the Taliban returned to fighting, so we did too.”

At the Nahr-e-Saraj outpost, a group of Sagoori’s men looked over the mud walls as fresh volleys of gunfire erupted over a nearby hill. Local police were attempting to build a road connecting local villages to the nearby highway, but Taliban forces still appeared for a few hours each day to slow their progress. Sagoori seemed unconcerned. He saw signs that the resolve of the local Taliban forces was beginning to weaken in the face of Afghan special forces operations and U.S. air support. “It’s becoming more and more difficult for them to conduct operations in this area,” he said. The Taliban are starting to feel the pressure, he said. “They’re starting to fight like rats.” 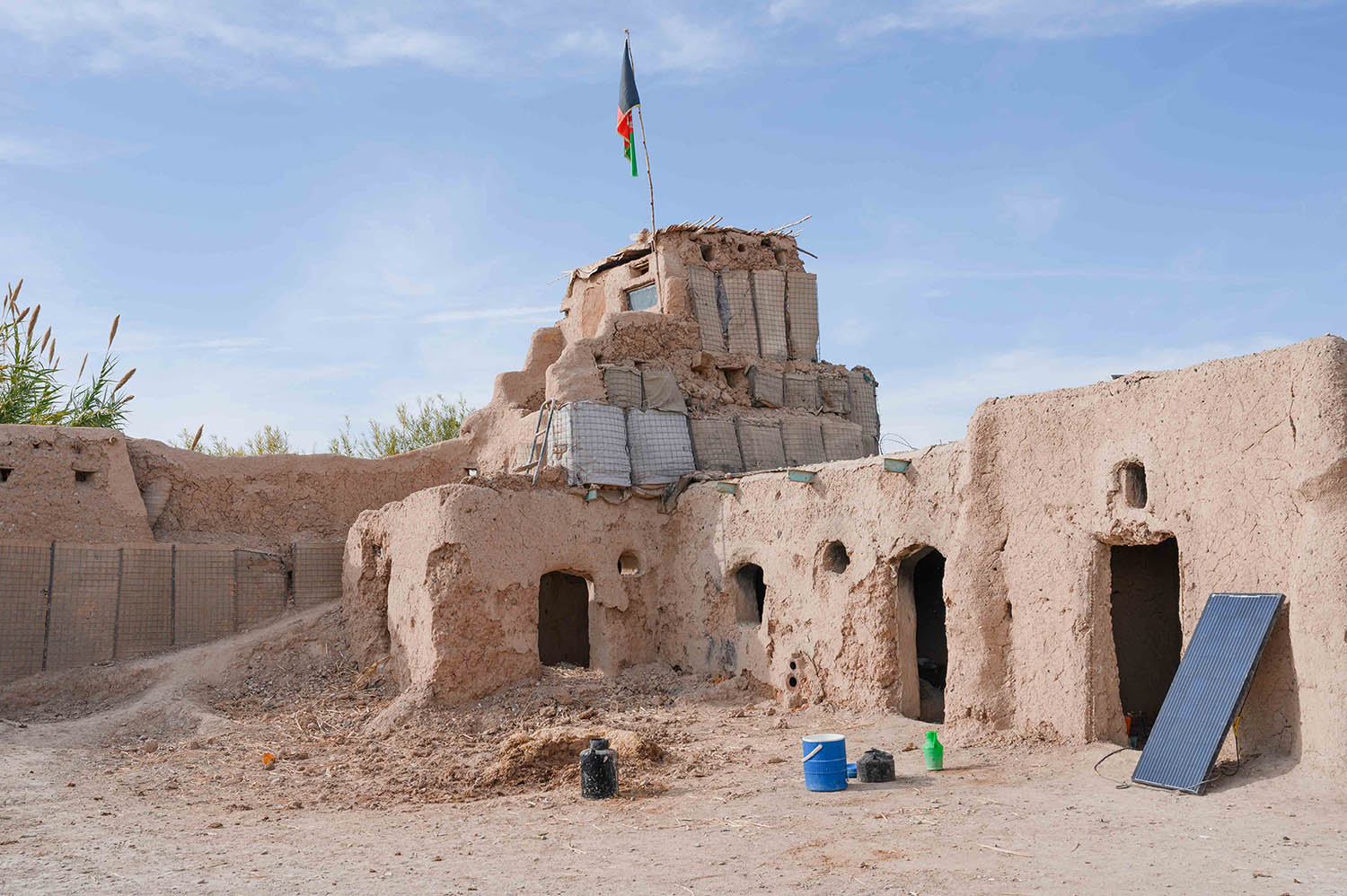 An ANA outpost sits along the main road between Lashkargah and Kandahar on Nov. 19, 2019. A network of small underground tunnels dug by the soldiers offers a final fallback position in the event that the outpost is overrun by Taliban forces. A single solar panel provides the only electricity. Kern Hendricks for Foreign Policy

Sagoori admitted that military pressure alone will not bring about an end to the current conflict or slow the procession of young Afghans fighting and dying on both sides. So far, it seems the politicians aren’t faring much better than Sagoori and his men: The United States hasn’t brokered a deal between Ghani and Abdullah, and the country remains in a deadlock.

“If the Taliban continue to fight, so will we,” Sagoori said. “But we can see from the past years that the problems of this country can’t be resolved by soldiers. Politicians are the only ones who can end this war.”

Afghans Wonder: Is the Peace Deal Just for Americans?

The Taliban are happily talking with Trump and standing down against U.S. troops, but they say they are "still at war" with Afghan national security forces.

In Bamiyan, an all-female demining team provides jobs and hope.

Kern Hendricks is a journalist and photographer based in Kabul. Twitter: @kernhendricks