A Train to Nowhere

Hovertrains were meant to revolutionize British transport. But they never arrived.

In the town of Peterborough, the sole-surviving relic of Britain’s doomed venture into hovercraft train travel looms over the entrance to a derelict coal yard.

The RTV 31, a sleek bullet-headed train painted with a now faded Union Jack, has the charm of a sci-fi movie prop—a testament to the expanding imagination of the 1960s and a world with its eyes turned toward outer space. But for the RTV 31, the future never arrived.

Once one of Britain’s most anticipated innovations, the test vehicle lay in a scrap heap until it was rescued more than 40 years ago by a group of conservationists intent on transforming a redundant power station’s coal yards into a wildlife haven and museum.

In the 1960s, British Prime Minister Harold Wilson promised that a “new Britain” would be forged in the “white heat” of a new scientific revolution. Combining the newly invented hovercraft with a linear induction motor, the tracked hovercraft train would ride on a cushion of air produced by fans.

In the 1960s, British Prime Minister Harold Wilson promised that a “new Britain” would be forged in the “white heat” of a new scientific revolution.

The track would be shaped like a T, with aluminum plates fixed on either side. Four pads provided the lift, with four more pads placed above them, rotating vertically to keep the RTV 31 balanced. Snow, rain, and debris would slide off the plates, keeping the train moving even in bad weather.

“Like to travel by train at 300 miles an hour? We may do in a few years’ time!” a news clip promised in 1966. Scientists hoped the RTV 31 would transport passengers from London to Glasgow in just two hours, outpacing the era’s conventional trains threefold. The project was budgeted at 5 million pounds—the equivalent of $130 million today.

As the speed of test vehicles increased, scientists discovered that the hovertrain needed less energy to keep it in motion than its wheeled counterparts. The monorail-style concrete blocks used on the track were simpler than existing railbeds, significantly reducing the cost of infrastructure.

However, trouble was on the horizon. The hoverpads required a lot of power and were so heavy they weighed down the train itself. The linear induction motor was bulky—not only difficult to build but making any adjustments a big job. The cost of building and laying new tracks was considered too high, and the project began to lose political support.

Eric Laithwaite, the inventor of the linear induction motor and an early proponent of the hovertrain, proclaimed it was “far too dangerous” to use, with the possibility of driving itself off the track. Other systems using the linear induction motor, most notably early maglev (“magnetic levitation”) projects, were leading the way—and the hovertrain struggled to keep up. In its first-ever test run, the train reached a discouraging 12 miles per hour. Estimates in 1972 that the project wouldn’t be ready until 1985 delivered another devastating blow. 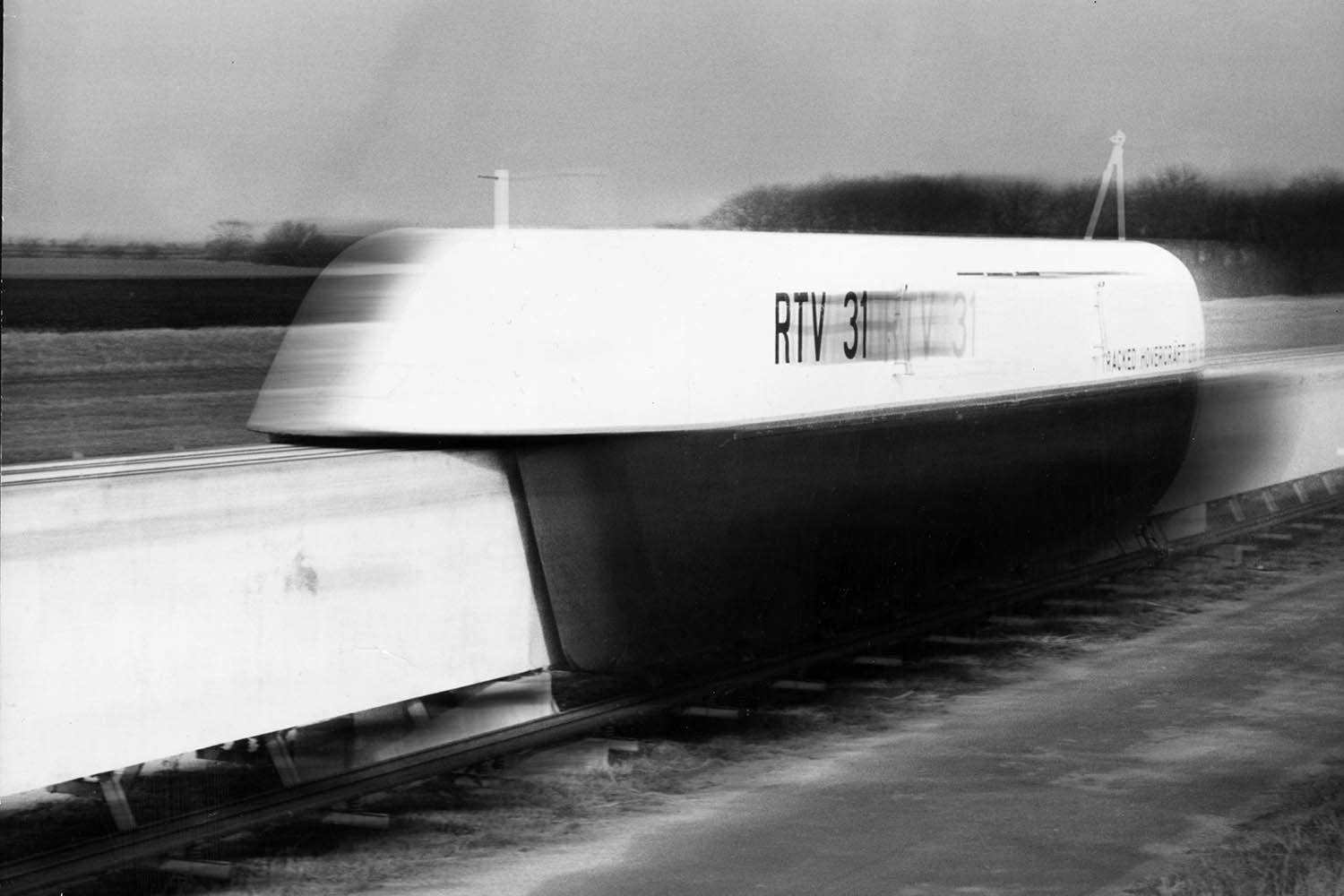 The RTV 31 hovertrain “achieves a fair turn of speed” during a test run in Cambridgeshire, England, on Feb. 7, 1973. Douglas Miller/Keystone/Getty Images

A test track was built near Ely, in Cambridgeshire. In 1973, the RTV 31 hovered a few inches above a concrete track for the very first time. It reached a speed of 104 mph—a significant improvement but a disappointment compared with its initial promise of being able to travel between London and Glasgow in just a couple of hours.

One week later, funding for the project was officially canceled. Still, the excitement of the hovertrain’s development is remembered fondly by those who were young at the time. It was a staple of news broadcasts, a promise that would revolutionize communities.

In the meantime, British Rail was advancing its plans to create the Advanced Passenger Train (APT), a rival high-speed project using hydraulic rams that could tilt the train as it turned to build up speed. The government could not justify funding two separate high-speed rail projects, and the APT was chosen. It proved to be equally doomed.

Elsewhere in Britain, the designers of the maglev train replaced the RTV 31’s problematic hoverpads with electromagnets. The tracked hovercraft now had to compete with the zero-
energy, steel-wheeled APT and the lower-energy lift system of the maglev train. But the British government never took up the technology; instead, East Asian countries pushed forward with high-speed rail.

Today, maglev technology powers the fastest route in the world: the Shanghai-to-Beijing bullet train, traveling up to 268 mph. In 2015, Japan unveiled plans to introduce a new track between Tokyo and Osaka that would be able to travel at a record-breaking 314 mph. The prospect of British high-speed rail, however, constantly hovers but is never realized.

Britain Knows It’s Selling Out Its National Security to Huawei

London’s justification for cooperating with the Chinese telecommunications company is riddled with obvious contradictions.