Separated Iranian Families Have Been In Self-Isolation For Years

Since U.S President Donald Trump's 2017 travel ban went into effect, thousands of Iranians have been separated from their families in the United States.

When Peyman celebrated his wife’s birthday in his apartment in Tehran on Nov. 13, 2018, he was the only family member in the room. There were two balloons, a plate of fruit, a small birthday cake with candles, and a photo of his wife holding their two young daughters projected on a curtain behind an empty sofa.

This has become a ritual since 2016, when his family moved to the United States to seek medical treatment for their then-2-year-old daughter, Arena.

When Peyman celebrated his wife’s birthday in his apartment in Tehran on Nov. 13, 2018, he was the only family member in the room. There were two balloons, a plate of fruit, a small birthday cake with candles, and a photo of his wife holding their two young daughters projected on a curtain behind an empty sofa.

This has become a ritual since 2016, when his family moved to the United States to seek medical treatment for their then-2-year-old daughter, Arena.

When Arena showed symptoms of an illness at an early age, it took little time for Peyman, who is a radiologist, to notice they were signs of a genetic disease. Arena was later diagnosed with Niemann-Pick—a disease that gradually leads to the failure of the nervous system, lungs, and brain. It’s a rare condition affecting 1 in 10 million people, for which the potential treatment can be found in only a few countries—and the United States is one of them.

Soon, the decision was made, and his family settled in a new home across the globe. Peyman, however, was denied a U.S. visa as President Donald Trump’s immigration ban gradually took effect. 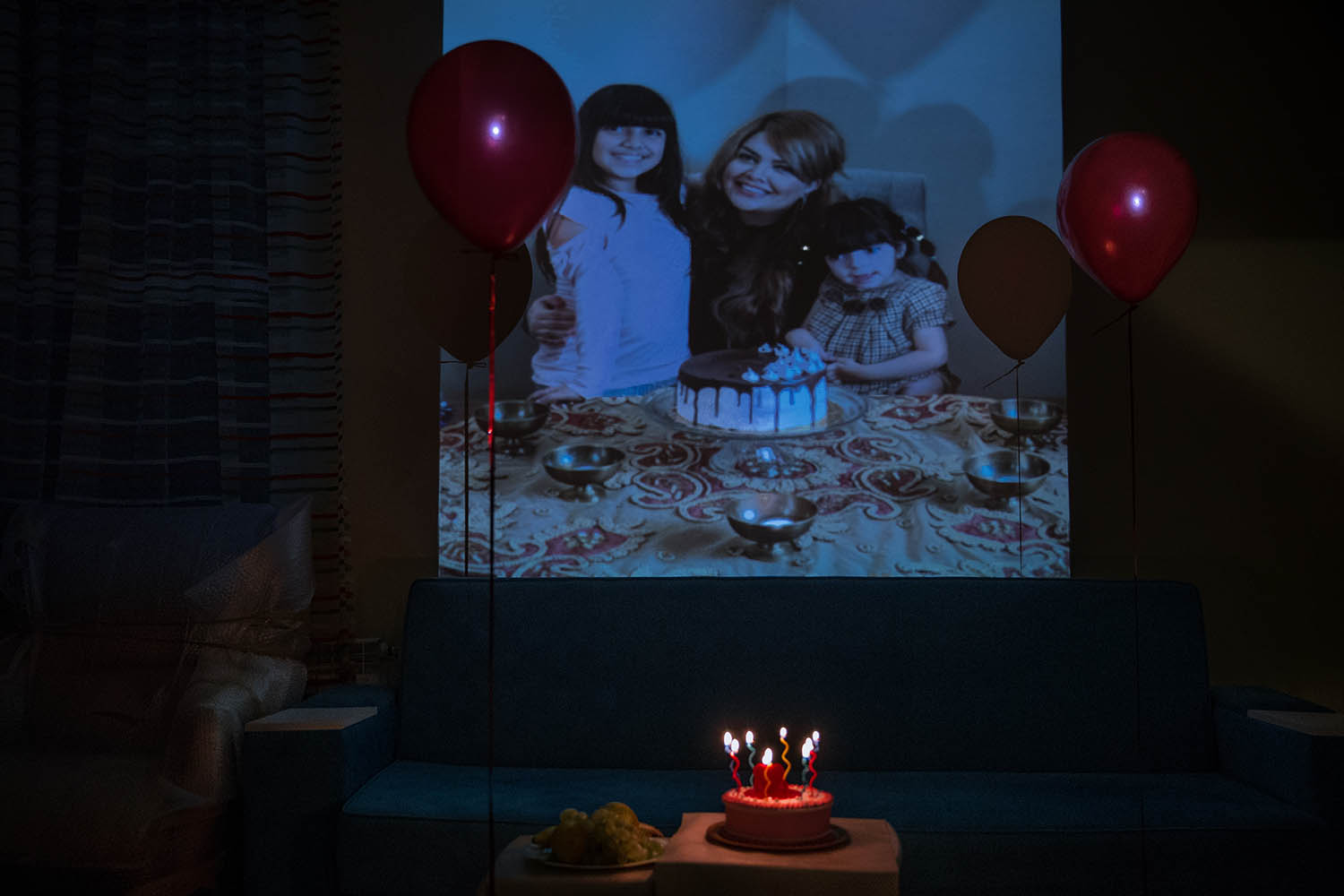 Peyman celebrates his wife’s birthday on Nov. 13, 2018, in Tehran while separated from his family in the United States.

In his first week in office, Trump ordered the implementation of a travel ban—a policy to impose harsh restrictions on immigrants from several Muslim-majority countries. It was later upheld by the U.S. Supreme Court, requiring that applicants apply for waivers.

The travel ban has affected the lives of more than 30,000 Iranians, whose visitor and permanent visas to the United States have been denied since 2017. Nearly a third of them seek waivers, hoping the indefinite procedure will eventually bear fruit.

The travel ban has affected the lives of more than 30,000 Iranians, whose visitor and permanent visas to the United States have been denied since 2017.

In 2018, when Peyman’s family came back to Iran for a short visit, he realized that a sense of detachment was pushing Arena away from him.

“My daughter hardly recognizes me anymore,” he said.

For Iranians, Trump’s anti-immigration policy was later coupled with economic pressure as the U.S. government pulled out of the nuclear deal that Iran had signed with world powers in 2015.

Washington then gradually imposed sanctions on various Iranian industries and blocked financial channels. As a result, the Iranian currency lost almost two-thirds of its value against the dollar and other major international currencies.

This created an extra financial burden for Peyman, who has been supporting his family from Tehran.

“We used to live like a rich family,” he said. “I had to sell our apartment and buy a smaller one to be able to pay for my family’s expenses, including my daughter’s medical costs.” 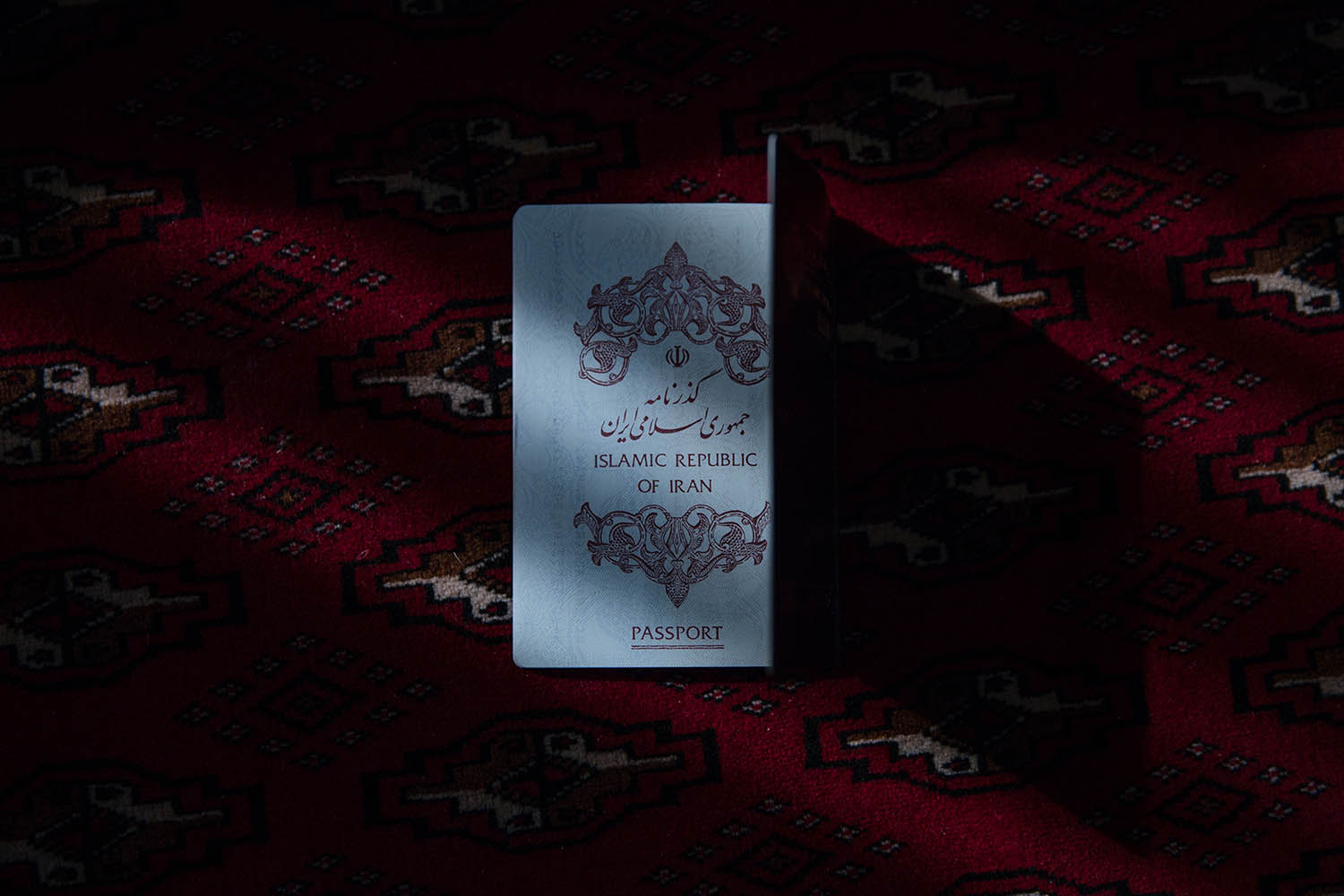 Passports like this one remind Iranians of their difficulties getting travel visas.

Sara married her Iranian-American husband in Turkey in 2016. After the wedding, they flew in opposite directions, living their lives apart in the U.S. immigration limbo.

They both assumed it would take no more than a few weeks for Sara to receive a spouse visa and join her husband in the United States, but soon it became an unending administrative process.

“My marriage might fall apart,” the 32-year-old resident of Tehran said. “As my age goes up, I keep asking myself, when will I be able to have kids?”

“It is difficult to explain that I live apart from my husband due to legal issues,” she said.

For Sara, the yearslong waiting game has led to severe mental anguish. Her future plans hang in the balance as she spends countless days waiting for news that she and her husband can eventually start a life together.

Then there’s the stigma of living without her husband beside her.

Her relatives don’t seem convinced that she is not living with her spouse purely because of the U.S government’s red tape.

“It is difficult to explain that I live apart from my husband due to legal issues,” she said. “I usually hear people saying behind my back, ‘He doesn’t want to take her [to the U.S.]’” 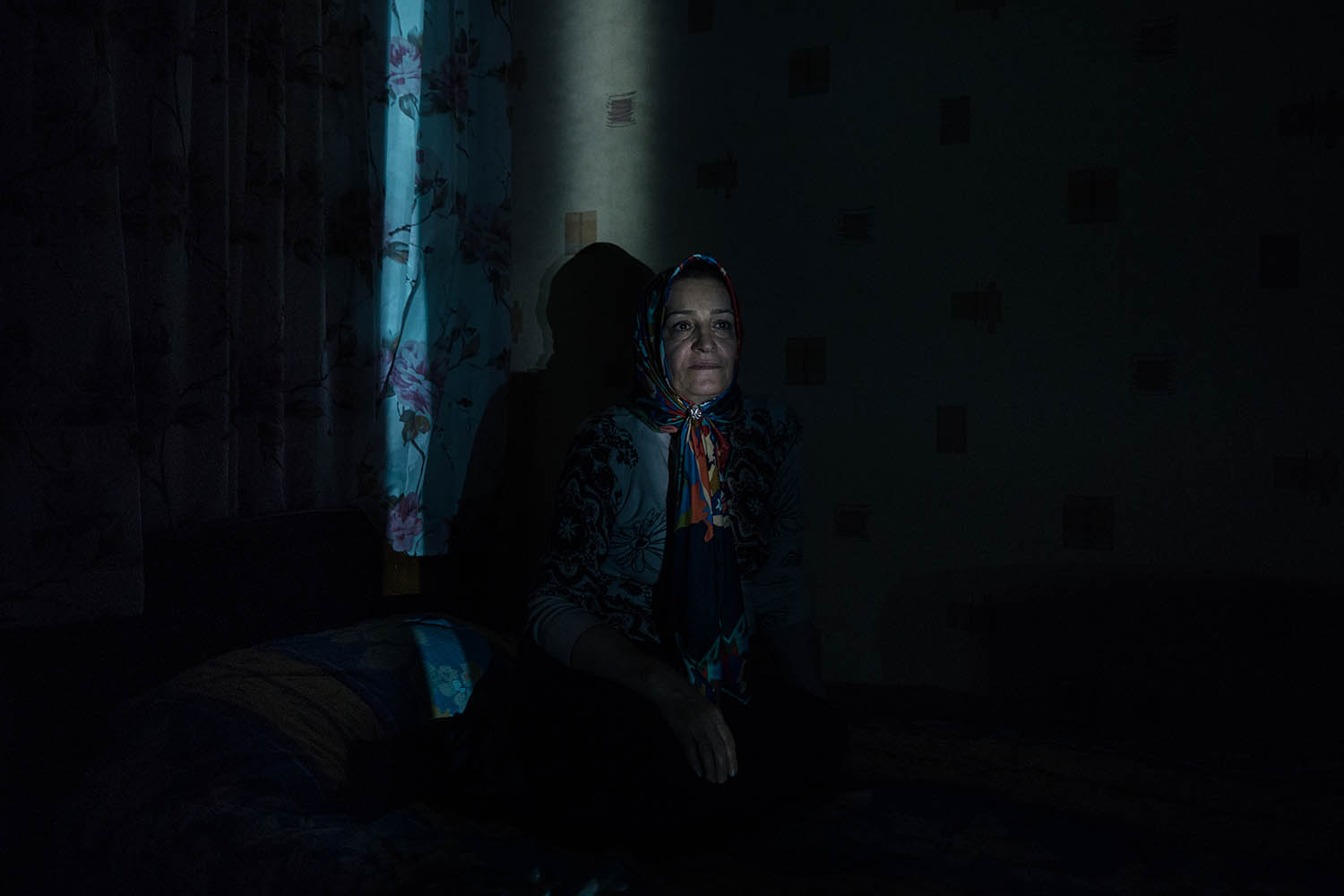 Akram has kept her son’s room tidy and clean since he flew to the United States in 2015 to study for a Ph.D. in mechanical engineering at Northeastern University in Boston.

So much has changed in the old high-rise neighborhood in western Tehran since Akram’s only child, Mehdi, left in pursuit of success. But his room looks exactly the same.

“Since he left Iran, I have slept on his bed every night,” she said. “There, I am able to smell his scent. It keeps his memory alive.”

“I need to see his face every day, even if it is just for one minute.”

Akram’s hopes of visiting her son vanished in 2018, when she was denied a visa due to Trump’s immigration policy. But the forced separation has failed to break their strong bond.

“We speak on Skype every night, even though I know he is busy and our waking hours hardly overlap,” she said. “I need to see his face every day, even if it is just for one minute.”

For now, Akram finds solace in wishing her son well. She keeps a small photo of Mehdi on her prayer rug and glances at it each time she unfolds the rug to say prayers.

“He left to pursue his dreams,” she said. “Despite us being apart, I still want him to be happy and successful.” 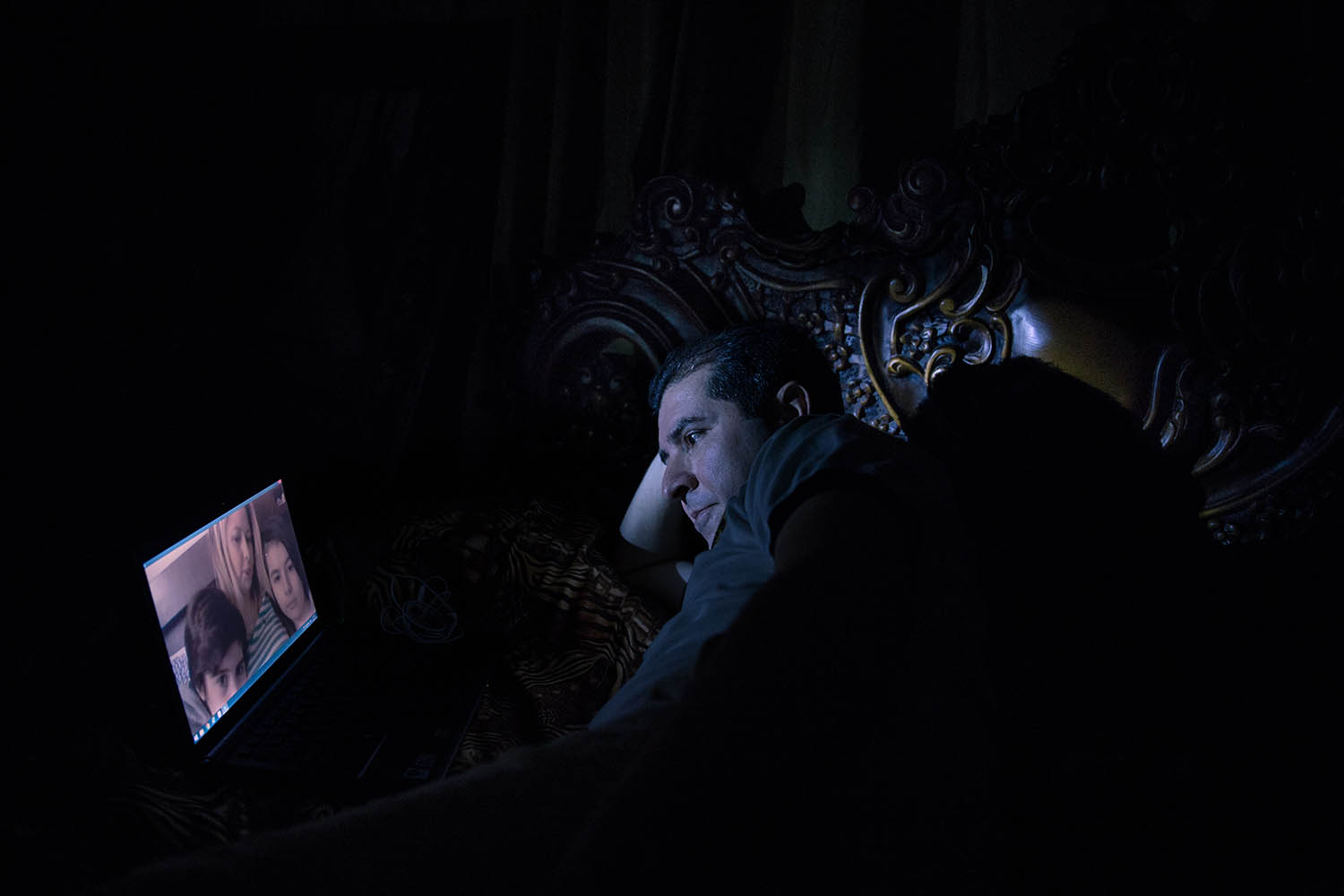 Farshad, seen at his home in Dec. 8, 2018, talks with his family every night via Skype.

Farshad has been living apart from his family ever since his wife took their children to the United States to start a life there.

In 2015, he abandoned a business he had run for 15 years in Dubai to come back to Iran as the U.S. State Department’s Diversity Visa Lottery program gave his family an opportunity to come to America.

Farshad, however, has been waiting for a U.S. visa ever since; when he finally got a lottery-visa appointment, the travel ban had gone into effect.

“As a businessman … right now, it bothers me the most that I can’t have a specific plan for my future,” he said.

A video call every night does little to alleviate the pressure that all family members feel as tensions between Iran and the United States escalate and Farshad’s hopes of getting a visa fade.

A video call every night does little to alleviate the pressure that all family members feel as tensions between Iran and the United States escalate.

Trump’s so-called maximum pressure policy has led to the escalation of tensions, as opposed to paving a path for dialogue between Washington and Tehran.

In early January, the United States killed Qassem Suleimani, a top Iranian commander of the Islamic Revolutionary Guard Corps’ Quds Force, in a missile strike at the Baghdad airport. A few days later, Iran struck back in revenge. It fired dozens of missiles from Iranian soil to the Ain al-Asad air base in Iraq, leading to brain injuries in more than 100 U.S. service members based there.

The soaring tensions brought additional distress to many families that have relatives living separately in both countries. The pressure was felt especially by Farshad’s 14-year-old daughter and 11-year-old son, who have been waiting four years for their father.

Farshad, however, hopes that the separation will soon come to an end.

“I’m happy that I’ve taught my children to be strong in the face of the hardship,” he said. “I know they will be able to get past these difficult times.” 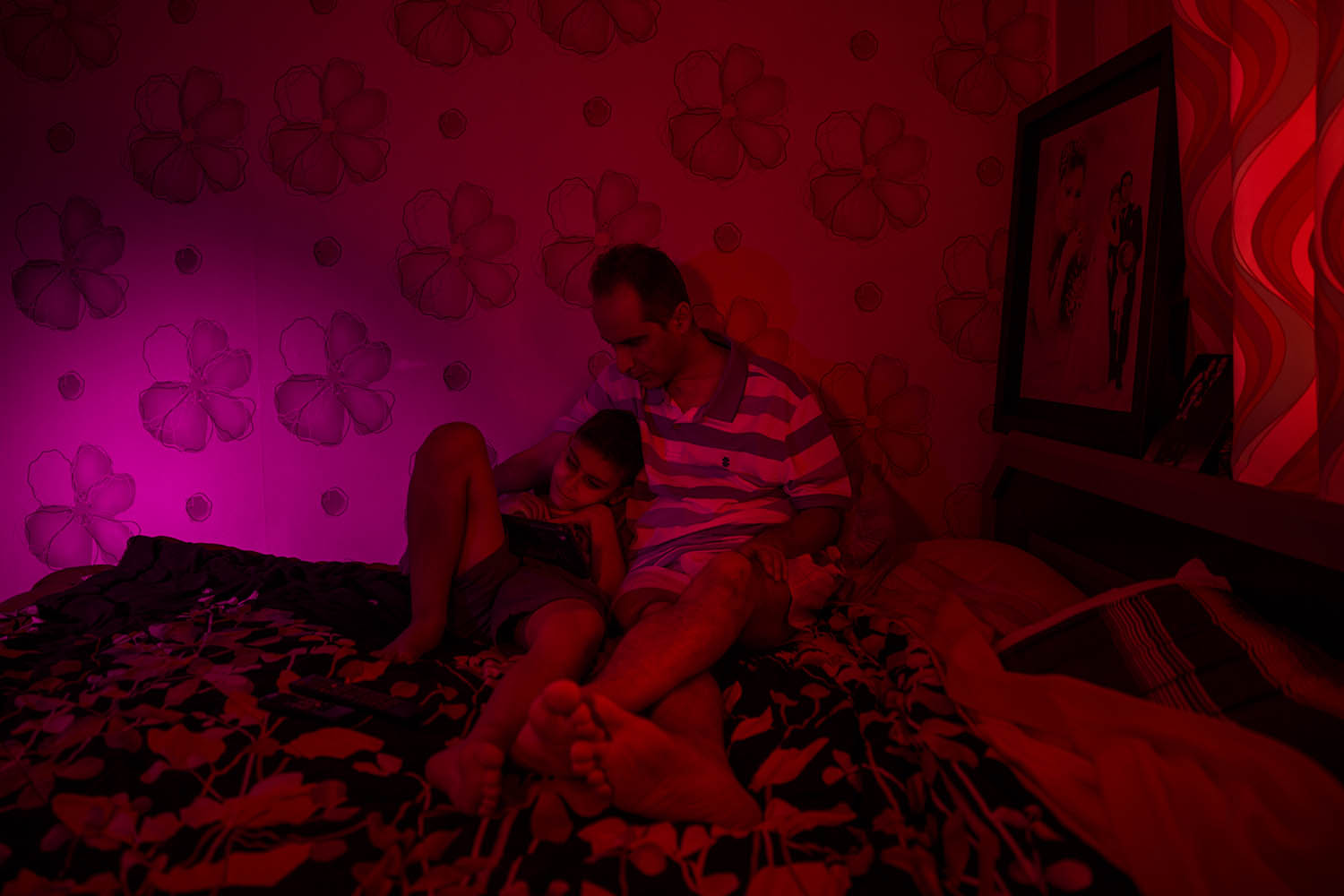 Parsa—with his father, Behzad—Skypes with his mother in the United States from Behzad’s apartment in Tehran on Aug. 9, 2019.

Behzad’s apartment in Tehran is filled with photos of his wife and young son, Parsa.

The two immigrated to the United States in 2015, waiting for Behzad to deal with their financial affairs before he joined them. Two interviews, however, have failed to provide him a visa to America, where 8-year-old Parsa and his mother have settled.

Deep in thought, Behzad seems more concerned about his son’s mental health and his relationship with him than the financial burden he endures while supporting his family in a distant country.

“My son doesn’t talk to me,” he said. “He avoids looking directly into my face.” 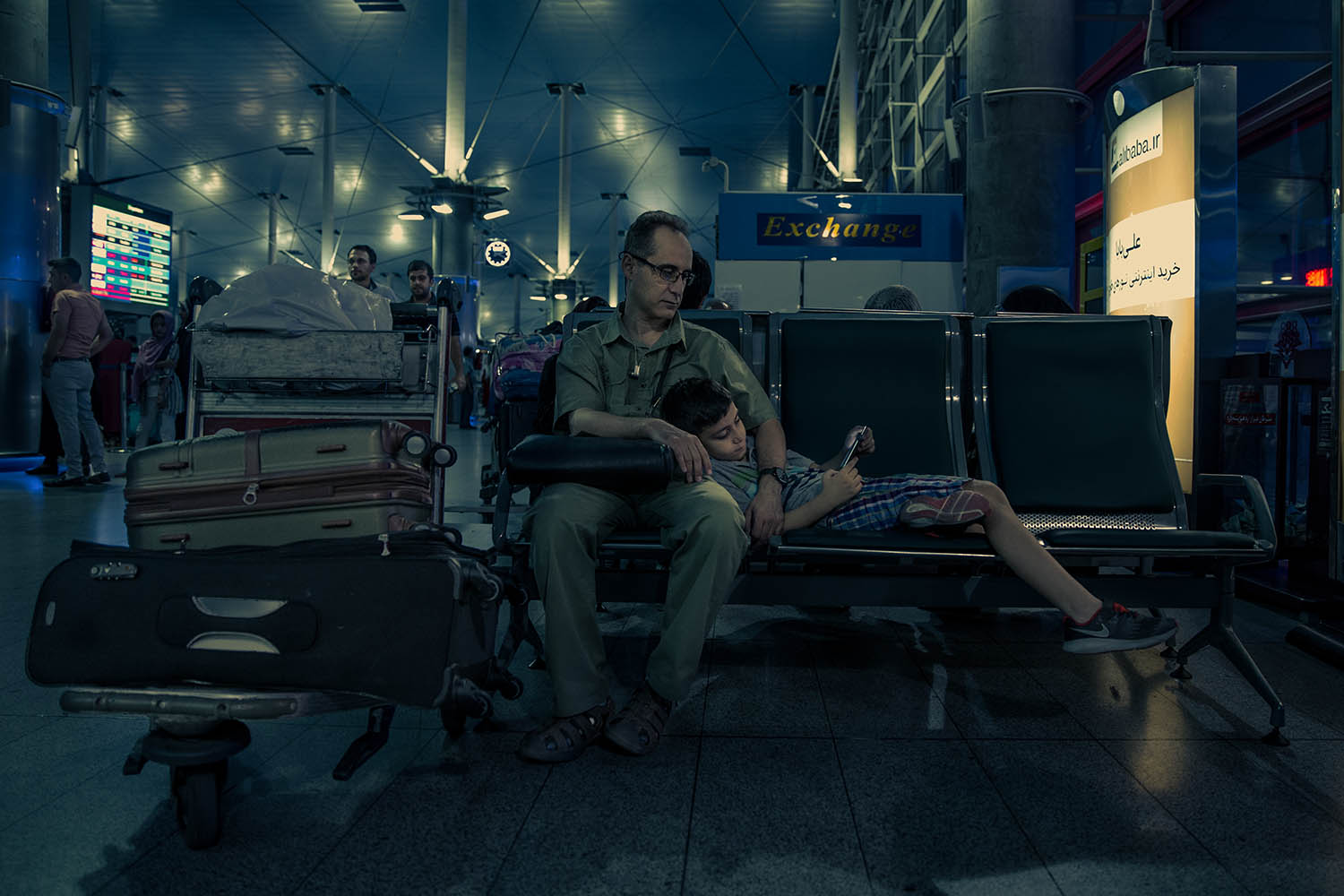 Parsa and his father wait at the airport in Tehran on Aug. 13, 2019, as the boy prepares to leave Iran for the United States, where he lives with his mother.

When Parsa came to Iran for a visit in the summer of 2019, he spent most of his time playing video games on his tablet to avoid direct contact with Behzad.

The visit brought more distress than comfort for Behzad, who now is preoccupied with concerns about behavioral issues that Parsa is developing while living apart from his father for a fifth consecutive year.

“His mother tried to explain to him why I can’t come to the U.S. with him, but Parsa blames me for my absence,” he said.

Saeed Jalili is a Tehran-based independent journalist. He has written for a variety of Iranian and international publications. Twitter: @sjalilis

Forough Alaei is a photojournalist based in Tehran, Iran. She's participated in VII Mentor Program since 2019. Twitter: @foroughalaei Instagram: @foroughalaei