Public hearings and classified briefings are another political casualty in the age of contagion.

On March 9, Trump administration officials gave a classified briefing to the Senate Foreign Relations Committee on peace talks in Afghanistan that left some Democratic lawmakers alarmed and clamoring for more details. “There are far more questions than answers regarding how this deal will actually work in practice, and it’s more clear to me now than ever before that we need to have a public conversation,” Sen. Chris Murphy said at the time. He called for “a public conversation, including open testimony” from U.S. President Donald Trump’s envoy to the peace talks, Zalmay Khalilzad, to address the concerns.

But then the coronavirus struck Washington—and routine congressional oversight was put on indefinite pause.

Now, a month later, all congressional hearings have been postponed or canceled, and some lawmakers as well as both Senate and House aides say they’re grappling with how to conduct proper oversight in an age of contagion. Public hearings, classified briefings, and grilling of Trump’s nominees for senior administration posts have all ground to a halt.

On March 9, Trump administration officials gave a classified briefing to the Senate Foreign Relations Committee on peace talks in Afghanistan that left some Democratic lawmakers alarmed and clamoring for more details. “There are far more questions than answers regarding how this deal will actually work in practice, and it’s more clear to me now than ever before that we need to have a public conversation,” Sen. Chris Murphy said at the time. He called for “a public conversation, including open testimony” from U.S. President Donald Trump’s envoy to the peace talks, Zalmay Khalilzad, to address the concerns.

But then the coronavirus struck Washington—and routine congressional oversight was put on indefinite pause.

Now, a month later, all congressional hearings have been postponed or canceled, and some lawmakers as well as both Senate and House aides say they’re grappling with how to conduct proper oversight in an age of contagion. Public hearings, classified briefings, and grilling of Trump’s nominees for senior administration posts have all ground to a halt.

Public health guidance has prevented lawmakers in particular from receiving classified briefings—normally conducted in small and specially secure rooms that would heighten the risk of spreading the virus for those in attendance. “No classified briefings means no oversight on sensitive details of really important U.S. foreign-policy issues,” said one Senate aide, speaking on condition of anonymity.

“There’s always lots of things they would rather not have to answer to Congress about, but the mandatory quarantine allows them to simply say there’s a classification issue and we don’t have any recourse,” another Senate aide said. 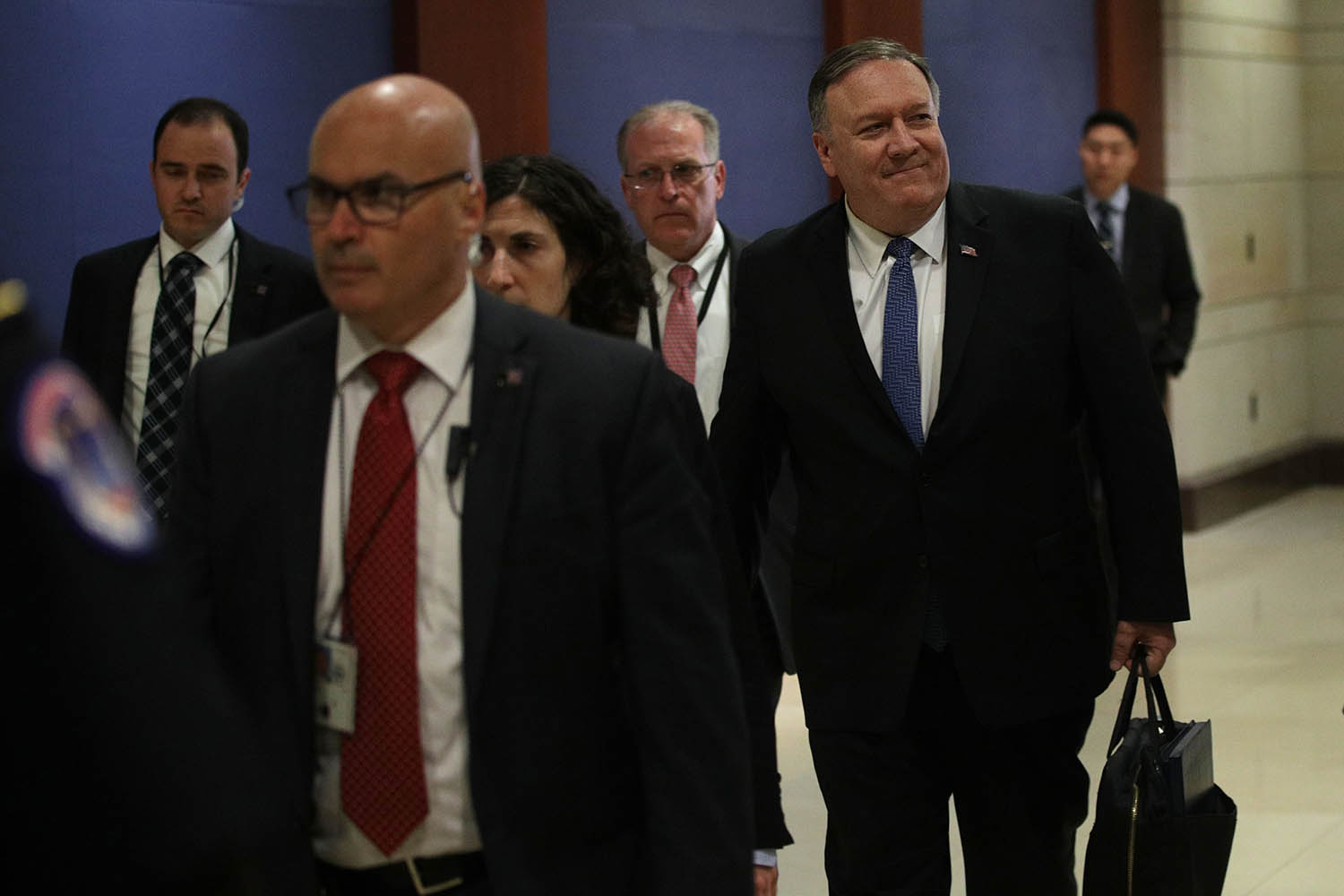 U.S. Secretary of State Mike Pompeo arrives at a closed briefing for House members on Capitol Hill on May 21, 2019. Alex Wong/Getty Images

A State Department spokesperson said the department routinely responds to requests from Congress despite the pandemic. “Since late January, the Department has briefed Members of Congress and their staff nearly 100 times on COVID-19 alone, and has continued to be responsive through correspondence and through conference calls on non-COVID-19 related matters,” the spokesperson said in an email response. “We estimate that approximately 500 non-COVID related Hill engagements were conducted since January 27 as well.”

Administration critics still worry the health crisis hamstrings lawmakers’ ability to act as a check on a president who in their view has repeatedly spurned congressional oversight, including during the impeachment trial that probed whether he pressured a foreign government for political gain. They worry that workarounds, such as virtual hearings or phone calls and emails with administration officials, don’t pack the same punch as public hearings or face-to-face meetings.

The issue has become more urgent to some Democratic lawmakers as Trump moves to defang the administration’s own watchdogs, firing both the intelligence community’s inspector general and the Defense Department’s inspector general within a week of each other.

“Congress was flat-footed in thinking about how to continue oversight functions,” said Mandy Smithberger, the director for the Center for Defense Information at the Project on Government Oversight. “The executive branch continues to move forward. Right now you have a lot of accountability via press releases and tweets.”

Aides and members are concerned that some of the big-ticket foreign-policy issues expected to lead the news cycle during the 2020 presidential campaign won’t even get a hearing in Congress. “Take your pick on the specific issues,” a House aide said. “Congress never held a hearing about the Afghanistan Papers, still hasn’t held one about repeal of the 2001 AUMF [Authorization for Use of Military Force], and these are, or at least were, potentially big campaign issues.” Congressional focus on the impeachment proceedings against Trump and the coronavirus outbreak, which has slowed activity on Capitol Hill, has frozen the possibility for hearings on other issues. This includes revelations in the Washington Post that the Pentagon and U.S. military touted misleading statistics about American progress in the war in Afghanistan and debates over the 2001 AUMF, originally used to prosecute that war and which the Trump administration now cites to justify military operations throughout the Middle East and Africa—similar to ways the Obama administration did.

The problem is compounded by potential delays in key authorizing bills that give Congress a say on the Pentagon’s spending and policy priorities, which legislators usually strive to hit by October.

“The likelihood that it slips past Oct. 1 is obviously increasing by the day,” Rep. Adam Smith, the chairman of the House Armed Services Committee, said on a call with reporters on Tuesday. “I think you’re going to see a lot of the congressional action that was planned for this year shift to the right.” The powerful panel had planned to have an authorizing bill ready by October or table the discussions until December if it couldn’t reach a deal ahead of the upcoming presidential election.

But social distancing measures adopted on Capitol Hill would place constraints on Congress’s ability to debate and rewrite the legislation, known to lawmakers as a markup. The Senate Armed Services Committee often conducts its frenzied debate in a small room in the Russell Senate Office Building that would likely be too cramped to comply with federal guidelines to combat the coronavirus pandemic, former aides say. Smith told reporters that he hoped to have the bill’s language ready for markup by May 1, but it’s not clear when lawmakers would return for debate in the nation’s capital. District of Columbia Mayor Muriel Bowser has cited models that do not expect the number of coronavirus cases to peak until early summer.

The Pentagon’s oversight needs are becoming more pressing in recent days as the department has mobilized a multibillion-dollar effort to combat the coronavirus, which has sidelined some of the military’s front-line assets and frozen travel for most U.S. troops. In the wake of the firing of the skipper of the coronavirus-wracked USS Theodore Roosevelt aircraft carrier that cost acting Navy Secretary Thomas Modly his job on Tuesday, Smith, the House armed services chairman, plans to hold a hearing about undue command influence from Trump filtering into the Pentagon, a House aide told Foreign Policy.

Others say oversight hasn’t stopped, and Congress is still doing its job despite hurdles from the pandemic lockdown. “Oversight consists of much more than just formal hearings or classified briefings,” said Suzanne Wrasse, a spokeswoman for the Senate Foreign Relations Committee chairman, Sen. James Risch. “The chairman and his staff have been communicating well, and arguably more than usual, with State officials and staff on a wide range of matters, both related to coronavirus and otherwise.”

Rep. Ami Bera, a member of the House Foreign Affairs Committee, said federal agencies have been responsive with requests from lawmakers despite the challenges the pandemic poses. “Obviously we can’t do classified briefings where we can really get into the nitty-gritty of what’s going on around the world, but I do think there’s been a level of responsiveness from the administration in nonclassified settings,” he told Foreign Policy.

Some suspect that lawmakers and staffers will be more reliant on open-source information and the media to conduct oversight on emerging foreign-policy issues and crises facing the Trump administration without regular access. “Sometimes you’re trying to get to something delivered to Congress that may be classified or sensitive,” a former Senate aide told Foreign Policy. “It may be more difficult if you don’t have those touch points.” 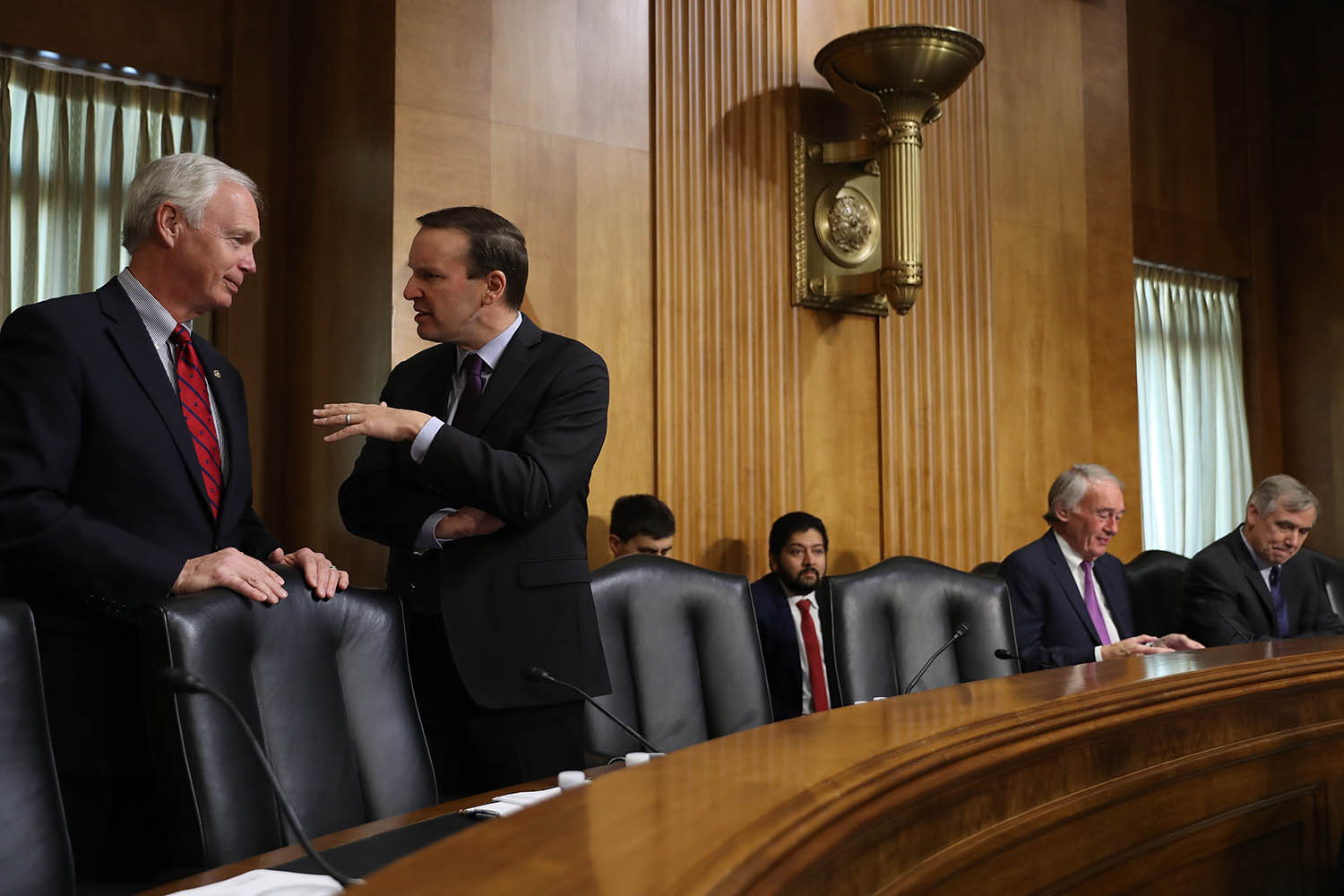 But some members of Congress are using the period of social distancing that has emptied most Capitol Hill offices to push the Pentagon into being more transparent with the public. In a letter to the chairman, Smith, and the ranking member of the House Armed Services Committee that was obtained by Foreign Policy, Rep. Katie Porter urged the powerful panel to publicly post all unclassified Pentagon documents marked “For Official Use Only,” sent under a guidance set forth by former Defense Secretary James Mattis in 2017 to protect “non-public information.”

Porter is urging Smith to use the Defense Department’s annual authorizing bill to mandate that the Trump administration post Defense Production Act orders to respond to the coronavirus pandemic on a publicly available website and to charge the Government Accountability Office to study the Pentagon’s noncompliance with congressional reporting requirements.

“Unfortunately, DOD frequently fails to deliver these reports on time, with the information and level of classification prescribed by law,” Porter wrote. “This study should determine the rate of non-compliance and what resources DOD estimates it needs in order to maintain this level of accountability.”

Lawmakers are pushing congressional leadership to allow for remote work, including holding debates and votes remotely, as well as holding hearings over videoconferencing.

“Congress must continue to conduct oversight of the way the administration is handling this public health crisis and potentially abusing any of the money we appropriated as economic relief for Americans,” Sen. Murphy told Foreign Policy. “While committees can’t function in traditional ways, SFRC needs to get creative about how to continue our oversight work under current circumstances.”

Wrasse, the spokeswoman for Risch, pointed out that lawmakers still conducted oversight when Congress went into recess before the pandemic. “The chairman and members are engaged in their regular duties remotely, and as the Senate periodically recesses for weeks at a time, this has so far not proved to impede their ability to conduct proper oversight,” she said. “That said, we are attempting to work with the minority and others in the Senate to explore options for remote meetings, including ways to continue to process the confirmation of important nominees.”

A House aide told Foreign Policy that House Speaker Nancy Pelosi tasked House Rules Committee Chairman Jim McGovern with determining the rules and possibility for remote voting in the House. McGovern has provided Pelosi with that information, the aide added.

Bera said there could be a silver lining coming out of the crisis, as the pandemic tamps down partisan rancor. “This crisis has also taken down some of the partisan rhetoric, some of the acrimony between Congress and the various agencies in the administration,” he said. “We realize we’re all in this together.”

NEW FOR SUBSCRIBERS: Want to read more on this topic or region? Click + to receive email alerts when new stories are published on U.S. Foreign Policy, U.S. State Department, Pandemics