Our contributors weigh in on Bernie Sanders’s departure from the U.S. presidential race—and what it means for an election campaign overshadowed by the coronavirus. 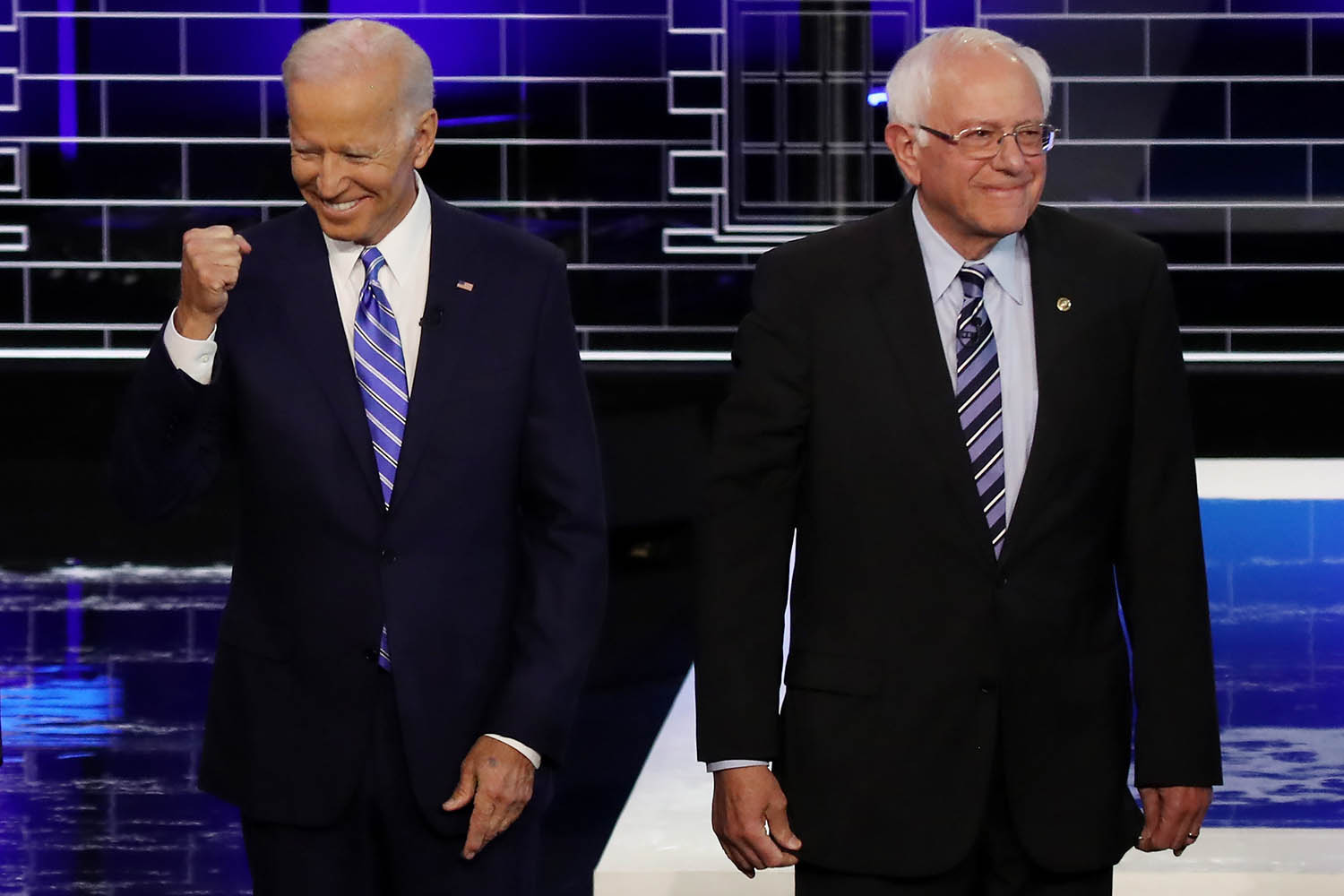 Republicans Can Pull the Lever for Biden With a Clear Conscience

Supporters of U.S. global leadership and a strong national defense, both Democrat and Republican, will breathe a huge sigh of relief with the news that Bernie Sanders has ended his presidential run. His toxic mix of isolationism, transnational progressivism, and 1960s-style blame-America-first leftism was a dagger pointed at the heart of the United States’ power and standing in the world. You think that President Donald Trump has done real damage to the international order built by the United States to secure the peace and prosperity of free nations since World War II? Then you should have watched what happens when you add a totally hollowed-out U.S. military to the equation, as well as submission to the whims of the United Nations General Assembly and the International Criminal Court. That would have been a Sanders presidency.

An enormous burden has now been lifted from the shoulders of the many Republicans concerned about national security.An enormous burden has now been lifted from the shoulders of the large number of Republicans concerned about national security, for whom the only thing worse than a second term for Trump would have been a first term for Sanders. With Joe Biden, these Republicans now have a more or less comfortable choice to settle on. As vociferously as they may disagree with some of Biden’s policy positions, they see him as an experienced foreign-policy hand clearly operating within the post-1945 bipartisan consensus—as an unabashed believer in U.S. strength and global leadership and in the power of free nations working in concert to advance shared values and interests. National security Republicans will no doubt fiercely oppose a President Biden on issues where they disagree. But many of them will also pull the lever for him with a clear conscience on Election Day.

Despite the relief brought by Sanders’s departure, it’s hard to dismiss the nagging feeling that his brand of radical progressivism offers the best preview of the Democratic Party’s future. Sanders may have failed in his bid to capture the Democratic nomination, but he has wildly succeeded in yanking the party leftward. The battle may have been lost, but the Sanders revolution still looks poised to win the war for the heart and soul of the Democratic Party. A bullet may have been dodged for now, but for how long?

Bernie Bros Will Flock to Trump

by Robert A. Manning

Sanders withholding convention delegates even as he concedes is a selfish hardball aimed at extracting leftish concessions from Joe Biden—which will make the latter only more vulnerable to Trump’s assaults. Recall that in every single Democratic primary so far, the majority voted for centrist candidates. When others dropped out, there was a stampede of support to Biden. Sanders never received more than one-third of the votes. On top of hyping phony conspiracy theories about Hunter Biden and Ukraine, Trump campaign ads will drive a truck over the Democratic platform if Biden even hints at adopting Sanders’s issues, such as open borders and Medicare for All.

Better Times for the Democrats

Bernie Sanders’s withdrawal from the U.S. presidential race promises better times for the Democratic Party. It comes only a few days after the April 4 resignation by Sanders’s comrade in arms Jeremy Corbyn as the leader of the British Labour Party, which will be similarly positive for the Democrats’ U.K. counterpart.A consequence of the coronavirus pandemic is likely to be a desire for normality rather than radical change.

Sanders recognized that he had no hope of winning the nomination. He may console himself that he has succeeded at moving the Democrats to the left, but this was not his doing alone—all the candidates for the nomination espoused policies that were considerably to the left of former presidential candidate Hillary Clinton’s 2016 campaign. Nevertheless, the Democrats clearly are not prepared to move as far as Sanders or his acolytes in the U.S. Congress would like. Moreover, a consequence of the coronavirus pandemic is likely to be a desire for normality rather than radical change.

It remains unclear whether Sanders will actively support Biden’s candidacy and encourage his supporters to show up on Election Day. Sanders may well prefer that Trump be reelected in order to galvanize a major reaction that not only results in the Democrats nominating a far-left candidate—but in getting that person elected as well.

Who Is Biden, Really?

Bernie Sanders’s departure removes a heavy brick from the rucksack that Joe Biden is carrying during this campaign marathon. But there are plenty more bricks still weighing him down. For starters, he still has to win over Sanders’s supporters. This will be difficult because Sanders still has not publicly endorsed Biden. On the contrary, Sanders is still collecting delegates, in essence asking his supporters not to vote for Biden—not yet anyway.The pandemic has slowed the anti-Biden messaging from Trump, who continues to consume all of the political oxygen in the room.

More seriously, Biden has to raise more money and reintroduce himself to the American people—really, to define who he is in 2020, at a time when Americans are thinking about everything but Biden.

The pandemic has slowed slightly the anti-Biden messaging from the Trump campaign, but the president continues to consume all of the political oxygen in the room. The result is increased pressure on Biden to engage in stunts to catch attention, such as hyperbolically claiming it was “close to criminal” to fire Navy Capt. Brett Crozier. (It was clearly nothing of the sort.)

Biden must resist the temptation to try to win a competition with the president for news cycle attention. Instead, he should spend the time developing a compelling platform for getting America going again after this crisis is over. This, of course, will be harder to do with Sanders’s ongoing influence and his determination to drag the Democratic Party much further to the left.

Yes, There Are Still Foreign-Policy Questions

The race between Donald Trump and Joe Biden unofficially has begun, and it is going to be very competitive. While COVID-19 and the economic fallout will dominate this campaign, there are nonetheless important foreign-policy questions that will play a role in certain regions and constituencies:

1. Will the United States continue to aggressively pursue fracking for natural gas? Biden has pledged to curtail it.As Biden pivots to the general election, we should soon see the foreign-policy choices put before American voters.

2. Will the U.S. military shrink or grow?

3. How hot will the U.S.-China relationship get, and will Biden have a different view from Trump?

4. What would relations with Russia look like under a President Biden?

5. What sort of policy would Biden pursue toward Iran? Toward Israel or Saudi Arabia? How about Cuba, India, Brazil? These are important policy choices, and some of them matter to key voter groups.

6. The Trump administration has pursued a number of controversial—but seemingly effective—policies to curtail migration, including agreements with Mexico and other Latin American countries. How would these policies change under a President Biden?

Trump’s handling of the COVID-19 crisis will determine if he gets a second term or not, so there is very little that Biden can do or say in the short term. Normal campaigning and normal fundraising events are not possible. Yet as Biden pivots to the general election, we should soon see more clearly the foreign-policy choices put before American voters.

Middle-class people, it turns out, have limited patience for things like intrusive social monitoring and censorship of personal expression.

From the Baltic Republics to Crimea, Washington has opposed forcible annexation—and the Golan Heights should be no exception.

Moscow and Washington have turned a page from the Trump era.

4 Key Takeaways From the British Report on Russian Interference

The U.K., in contrast to the United States, never sought to establish how much Russia may have interfered with the 2016 Brexit referendum, a parliamentary committee concluded.