Oil producing nations have agreed to a 10 million barrel reduction, with Russia and Saudi Arabia contributing to half of those cuts.

If history has taught us one thing, it’s that when we’re focused on one crisis, the next is just around the corner. Today, FP is launching While You Weren’t Looking, a weekly newsletter on the world beyond the coronavirus pandemic by Amy Mackinnon. Sign up here, and check out the preview edition.

If history has taught us one thing, it’s that when we’re focused on one crisis, the next is just around the corner. Today, FP is launching While You Weren’t Looking, a weekly newsletter on the world beyond the coronavirus pandemic by Amy Mackinnon. Sign up here, and check out the preview edition.

Saudi Arabia and Russia have agreed to cut oil production by 10 million barrels per day following a meeting of the OPEC Plus oil-producing countries yesterday.

The deal includes a 5 million barrels per day reduction between Saudi Arabia and Russia with the other 5 million in cuts being taken by the remaining nations of OPEC plus, the Financial Times reported. The cuts will be phased out gradually up to April 2022.

Eyes now turn to today’s G-20 energy ministers meeting, where the United States and Canada will be urged to join in cutting production by a further 5 million barrels per day. “We are expecting other producers outside the OPEC plus club to join the measures, which might happen tomorrow during G-20,” Kirill Dmitriev, head of Russia’s wealth fund and one of Russia’s lead oil negotiators told Reuters.

Will it be enough to shore up prices as demand falters? With so many of the world’s oil consumers shut indoors due to strict coronavirus measures, even a 15 million barrel cut in daily production would likely be insufficient in making up for the drop in demand. As the forecast in the graphic below from U.S. Energy Information Administration data shows, consumption has dropped so far so fast that it could be months until it returns to the 100 million barrel per day mark enjoyed in 2019. 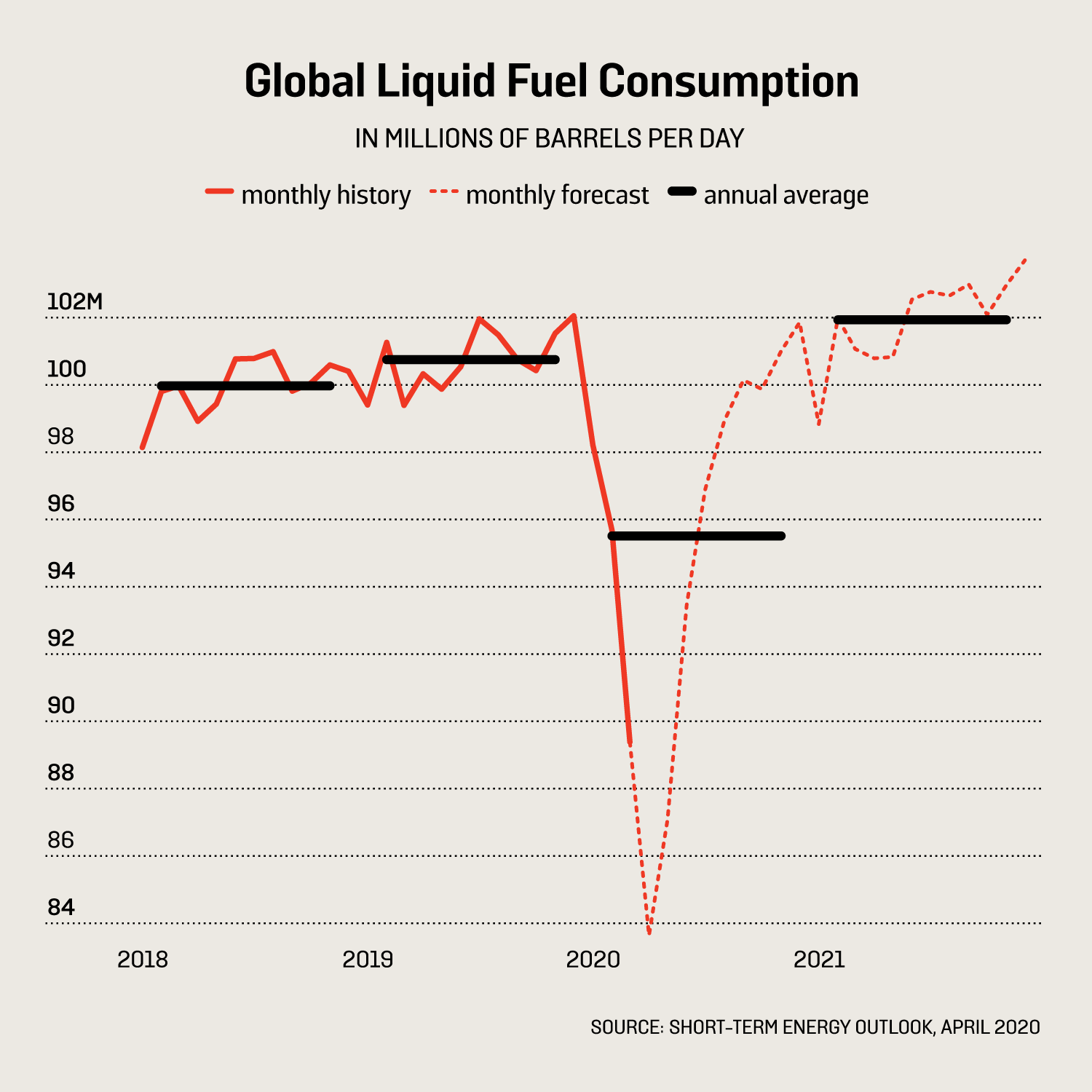 How has Russia handled its price war with Saudi Arabia? Not well, according to FP columnist Steven A. Cook. He argues that the month-long spat with Saudi Arabia shows how much Russia has overplayed its hand in the Middle East. “One likely outcome of this episode will be an end to the idea that Moscow will play a significant role in establishing a new regional order,” he writes.

EU leaders agree on economic package. European Union leaders have reached an emergency agreement to counteract the worst economic impacts of the coronavirus pandemic. The Netherlands, which had led the opposition to calls from southern European nations for access to easier credit lines, eventually had to compromise after German Chancellor Angela Merkel convened a call between Dutch Prime Minister Mark Rutte and Italian Prime Minister Giuseppe Conte. Conte had warned earlier in the day that a failure to reach an agreement could lead to the end of the EU.

As part of the agreement, nations will have access to the credit lines of the European Stability Mechanism, otherwise known as the EU’s bailout fund, on condition that spending be limited to direct responses to the pandemic. The deal also boosts the lending capacity of the European Investment Bank and a new unemployment insurance program.

Chad strikes back at Boko Haram. Chad’s military forces claim they have killed 1,000 Boko Haram militants in a 10-day long operation in the west of the country. The operation was undertaken in retaliation for a March 23 attack by Boko Haram attack that killed almost 100 Chadian soldiers, the Islamist group’s deadliest attack to date. “Our men occupied two Boko Haram island bases and have also deployed on the Lake Chad banks of Niger and Nigeria. They will keep their positions until the arrival of these countries’ troops,” a spokesperson said.

Chad reported 52 of its soldiers were killed over the 10 days of fighting. Despite striking back against Boko Haram, the country and its repressive government are not stable. As Will Brown wrote in FP earlier this month, “The Chadian regime—long thought of as the West’s indispensable ally in the fight against terrorism in Africa—could be nearing breaking point.”

Yemen cease-fire is holding. As the Saudi-led cease-fire in Yemen enters its second day, it’s not yet clear whether the Houthis will back the halt in hostilities. As Elana DeLozier writes in FP, the timing of the cease-fire and a call for talks is fortuitous for the Saudis. “Saudi Arabia is right to prioritize a political solution that includes a bilateral settlement of terms with the Houthis. The alternative may be a fait accompli via a series of Houthi military victories that increasingly best the already weak Hadi government forces,” she writes.

IMF issues a warning. Kristalina Georgieva, the head of the International Monetary Fund (IMF), said that more than 170 countries will see a drop in living standards as coronavirus measures wreak havoc on the global economy. “Just three months ago, we expected positive per capita income growth in over 160 of our member countries in 2020. Today, that number has been turned on its head: we now project that over 170 countries will experience negative per capita income growth this year.” Georgieva’s remarks came ahead of the IMF’s new forecast for the world’s economy, due next week. Georgieva added that over 90 countries had sought some form of assistance from the IMF since the onset of the crisis.

Johnson leaves the ICU. British Prime Minister Boris Johnson has been moved from the intensive care unit at St. Thomas’ Hospital in London after spending three nights there. He will remain in hospital “for close monitoring,” according to a Downing Street spokesperson. It is not yet clear when Johnson will be fit to resume his duties as prime minister.

Residents crowded the liquor stores and supermarkets of Bangkok yesterday as the city announced a 10-day alcohol sales ban, starting today. Authorities brought about the ban in an attempt to limit social gatherings ahead of the Thai New Year’s celebrations, starting on April 13. More than half of Thailand’s coronavirus cases have been in Bangkok.

As much of the world is asked to shelter in place, two cosmonauts and one astronaut will be working far from home at the International Space Station. Russia’s space agency announced yesterday that the three-man crew had docked successfully at the station after lifting off from Kazakhstan six hours earlier. The crew’s preparation was altered due to the coronavirus outbreak, with press availabilities curtailed and their families blocked from attending their launch.