The pandemic has decreased some kinds of crime and increased others. But the world is much safer than it used to be, and we know how to make it even safer. 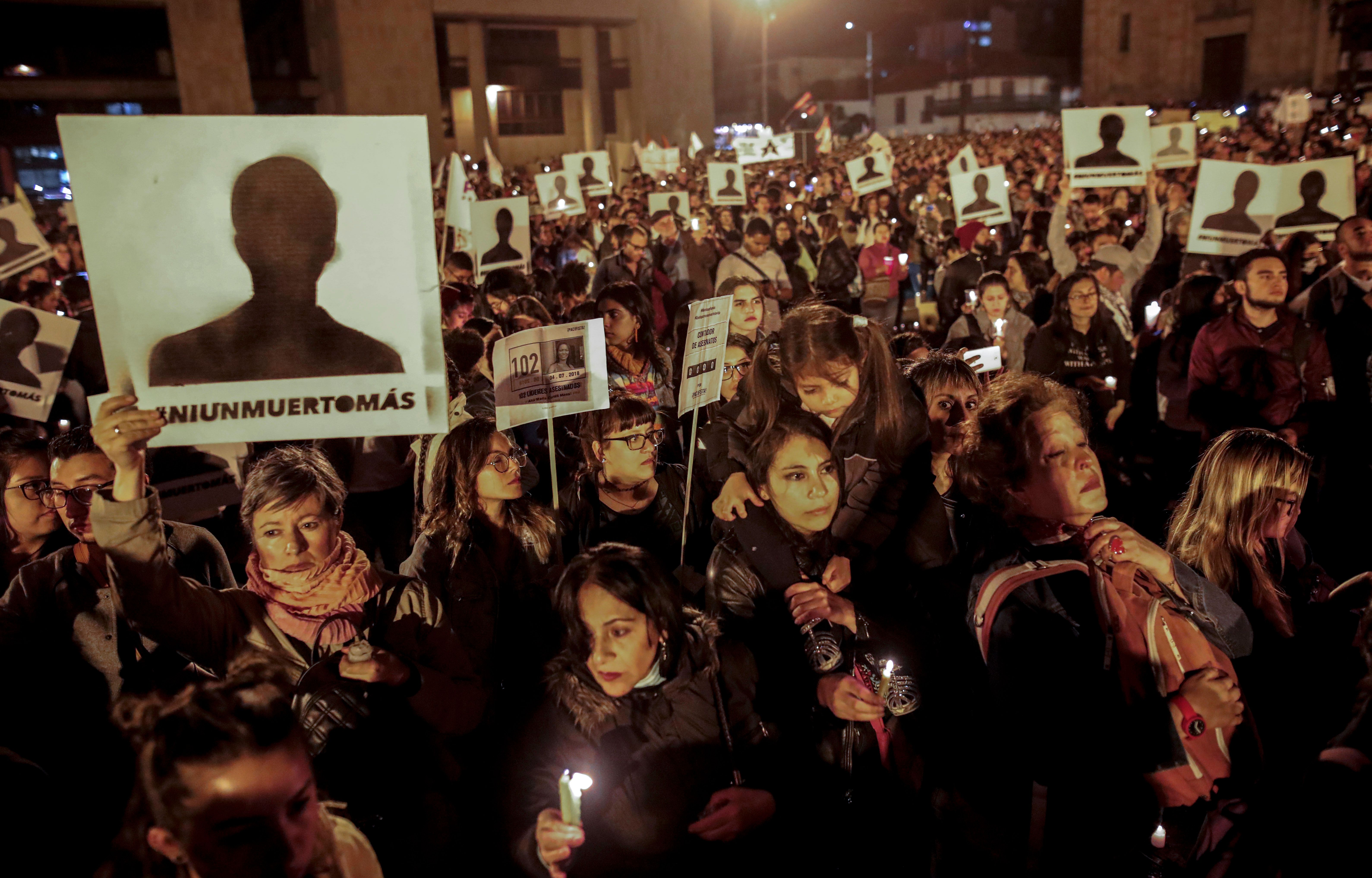 Protesters at a vigil for murdered social leaders in Bogotá, Colombia, on July 6, 2018. JOAQUIN SARMIENTO/AFP via Getty Images

The world is convulsed by the novel coronavirus, but that is not the only pathogen that afflicts us. Criminal violence is also endemic, contagious, and highly virulent. More than 464,000 people were killed in homicides in 2017 (the last year for which we have reliable data), at least five times as many as were killed in war. Millions more suffer from physical and psychological injuries left by domestic abuse, gang fights, and extrajudicial violence.

With nighttime curfews and enforced quarantines keeping people off the streets and out of the bars, some forms of violent crime are dropping quickly in North America and parts of Latin America. But with people cooped up and getting agitated, domestic abuse appears to be increasing. Cybercrime is rising as well. And in countries such as Mexico that are beset by organized crime, homicide rates have spiked to record highs—which suggests a breakdown of public order as the pandemic spreads.

The longer-term prospects are even less clear. A major worry is what will happen if food prices rise when supply chains break down. The price of basic food products is a life-or-death issue for the more than 60 percent of the world’s population who depend on the informal economy. There are also fears of increased social disorder when governments violently enforce lockdowns and quarantines, as they are doing in Kenya, South Africa and Uganda. In the Philippines, the president has issued shoot-to-kill orders for those protesting the lockdown. Meanwhile, in Brazil, El Salvador, and Italy, gangs and mafia groups are imposing their own curfews to keep the virus from spreading.

But the potential for certain forms of violence to escalate in the wake of the pandemic should not blind us to the fact that the world, on average, has become a much safer place. Most countries experienced sharply declining rates of lethal violence over the past two decades. Just as importantly, we are starting to understand, based on evidence from around the world, which kinds of policies and programs actually work to diminish violent crime, and which don’t. Armed with this evidence, we have the power to reduce violence further—whether it is caused by the pandemic or not.

The scale of these reductions in lethal violence has been stunning. Between 1990 and 2015, North America halved its homicide rate, which is now close to historic lows in the United States and Canada. European countries also registered sharp drops. In Asia, the homicide rate was was 38 percent lower in 2017 than in 2000. Declines of more than 50 percent were recorded in countries such as Colombia, Ecuador, Estonia, Kazakhstan, Russia, and Sri Lanka.

In many cities and neighborhoods, the drop in homicides has been staggering. In the United States, most of the 30 largest cities are much safer today than a few decades ago. New York recorded more than 2,200 murders in 1990, but barely 300 in 2019. Washington, D.C., experienced a drop from more than 700 homicides in 1990 to just 163 in 2019. Other North American and Western European cities have followed a similar trend.

Good news even comes from some of the world’s most violent places. The onetime murder capital of the planet, Medellín, Colombia, experienced a dizzying decline of lethal violence, from a high of 266 homicides per 100,000 inhabitants in the early 1990s to 30 per 100,000 in 2015, a fall of nearly 90 percent. Bogotá’s homicide rate fell from 81 per 100,000 in 1993 to roughly 17 per 100,000 in 2015. São Paulo, a notoriously homicidal city, is currently registering the lowest homicide rate since records began.

Why has life in so many places become so much safer? As so often happens, there are many causes, and they are not easy to separate with confidence. Individual violence is largely a young man’s game, and societies with a higher proportion of teens and young adults tend to have higher levels of violent crime. By contrast, countries with older populations such as Japan, Italy, and Germany are often more peaceful.

But a country’s age distribution changes slowly and cannot explain a halving of violence in a decade by itself. When we compare regions, violence is statistically correlated to the level of inequality, perhaps because men at the bottom of a steeply unequal income distribution become more sensitive to social status and react violently to minor affronts. But that hypothesis cannot explain why violence is poorly correlated with inequality over time: Violence has dramatically decreased even as income inequality has increased in many countries.

It may not be inequality in income that predicts violence but inequality in protection against violence by institutions. In A Savage Order, the security expert Rachel Kleinfeld observes that in the most violent societies, the state acts as a security force for elites rather than a universal guarantor of peace. When societies begin to entrust their protection in a capable police force and justice system, they come to enjoy more law and order for all.Political leaders need to decide that homicide reduction is an achievable goal, not a campaign slogan or source of pork-barrel spending.

A common thread in regions that have reduced violence is larger and better-trained police forces targeted at reducing violence in the places where it is worst. Social and political solidarity are essential parts of this virtuous circle. When political leaders enlist police and communities as partners in enforcing norms that sanction delinquent behavior and promote collective safety, violent crime declines.

The virtuous circle of crime reduction often starts when cities and regions set clear targets spanning multiple election cycles and administrative fiefs. Political leaders need to decide that homicide reduction is an achievable goal, not a campaign slogan or source of pork-barrel spending, and commit adequate resources to the task. Implementing these plans requires sustained buy-in from mayors, police chiefs, and civic and business leaders.

The policies and programs must be selected on the basis of reliable data showing that they work, rather than on fads, slogans, or utopian hopes of extirpating root causes such as poverty and racism. Police must be seen not as antagonists but as service providers delivering what everyone in the community wants: safer streets and homes. And because criminal violence is so concentrated—we know from the data that a small number of neighborhoods and perpetrators account for a large share of the violence—successful crime reduction must focus resources on the places that are most violent.

These efforts can draw on a growing body of evidence about what works and what doesn’t. In his book Bleeding Out, which reviews a literature of thousands of studies on violence reduction, the criminal justice researcher Thomas Abt shows that one of the most effective tactics is hot-spot policing, which homes in on the cities, neighborhoods, and street corners where violence is most rampant. A complementary proven strategy is focused deterrence, which singles out the most aggressive gangs and individuals and sends them the clear message that they will be punished for committing violence and rewards them (with jobs, training, and other opportunities) for refraining from it.

When potential troublemakers are identified, another strategy whose effectiveness is clear from evidence is cognitive behavioral therapy. These interventions are designed to override the maladaptive thought habits and impulsive behavior that cause criminal delinquency, and to teach strategies of self-control that can stop an escalation into aggression before it begins. They include training in anger management and social skills, together with counselling in strategies that are explicitly designed to prevent recidivism.

These good habits can be reinforced by engineering urban environments with fewer temptations to resist—with earlier bar closings and fewer dark streets, secluded corners, and abandoned buildings. According to the sociologist Patrick Sharkey, urban renewal and local mobilization efforts to reclaim parks, city blocks, and open plazas in the United States played a pivotal role in reducing crime and victimization.

The goal of preventing people from killing each other in large numbers is not just desirable but achievable. The goal of reducing the global homicide rate by 50 percent by 2030—about 6.5 percent a year—has been embraced by Pathfinders for Peaceful, Just and Inclusive Societies, a coalition of governments, national and international organizations, and foundations and private sector partners.

The first order of business is to double down on evidence-based interventions in the most dangerous countries, cities, and neighborhoods, capitalizing on our knowledge of what works and what doesn’t, and on the fact that lethal violence tends to concentrate in a few areas and among a small number of people. When the right measures are applied in the right places, homicide and other forms of violent crime can drop quickly.

The moral value of looking at data is not just that it’s the only basis for choosing policies that actually save lives. Quantifying goals for reducing violence is also ethical because it treats all lives as equally valuable. Actions to prevent the greatest number of murders prevent the greatest amount of human tragedy. As the pandemic reminds us, there is no more important goal than saving lives.

Steven Pinker is the Johnstone family professor of psychology at Harvard University and author, most recently, of Enlightenment Now: The Case for Reason, Science, Humanism, and Progress. Twitter: @sapinker