In Europe, the Lives of Refugees Are on Hold

The pandemic proves a mixed blessing: Deportations are suspended but so is health care.

STUTTGART, Germany—When Esmat Mohammadi sees what the coronavirus crisis has done to his adopted city of Stuttgart—where the only crowded places are supermarkets and security guards monitor customers—he can’t help but smile. “I wonder what they do in a real crisis or in times of war,” said the 22-year-old refugee from Afghanistan.

STUTTGART, Germany—When Esmat Mohammadi sees what the coronavirus crisis has done to his adopted city of Stuttgart—where the only crowded places are supermarkets and security guards monitor customers—he can’t help but smile. “I wonder what they do in a real crisis or in times of war,” said the 22-year-old refugee from Afghanistan.

For many refugees like Mohammadi, the pandemic has been a mixed blessing. Afghans belong to one of the world’s largest refugee groups, and until recently they have been deported from Germany with regularity. But at the moment deportations have been paused—not out of any sense of humaneness but in part because air travel has been halted and Afghan authorities begged Berlin to stop the process, with Afghanistan facing its own coronavirus crisis.

Mohammadi came to Germany four years ago, leaving his home country for obvious reasons: the war and destruction that has plagued Afghanistan for more than four decades. Currently, the virus has reached large parts of the country. As of April 20, Afghanistan had reported 1,026 COVID-19 cases and 36 deaths, but observers and medics on the ground believe that the real number of infections could be much higher. According to reports, at least 40 staff members in Afghanistan’s presidential palace have tested positive for COVID-19, and President Ashraf Ghani is now isolating himself and managing the country’s virus response, amid a raging war, largely via videoconference.

At the same time, even as they’ve escaped deportation for the moment, many Afghan refugees feel more vulnerable than ever and deprived of any access to health care at all, with health care systems in Germany and other major European countries near the breaking point. According to Médecins Sans Frontières (MSF), refugees across Europe are particularly vulnerable and susceptible to COVID-19. “They too often live in collective and overcrowded accommodation. Sometimes, access to water is problematic, and they face obstacles to access services. This is particularly true for undocumented people or refugees that are at risk of Dublin returns. If they fear they will be arrested when going to the doctors, they won’t report symptoms that could be linked to COVID-19,” said Aurélie Ponthieu, a humanitarian specialist at MSF.

In the Moria camp on the Greek island of Lesbos, more than 19,000 people are caged between chaos and desperation. Most of the refugees are from Afghanistan, Syria, Eritrea, and other African and Asian countries. Conditions in the island camp, initially constructed for a total capacity of 3,000 people, have never been worse.

“What is happening here is a shame for Europe. This includes Germany as well. We could do much more to help those people, but our government does not care,” Erik Marquardt, a Green Party politician and member of the European Parliament who has visited Lesbos several times, told Foreign Policy in a phone conversation.

MSF officials believe the situation in Greece is dire. “We have called for the end of the containment policy on the Greek islands for four years now,” Ponthieu said. “This policy has always been disastrous for people’s health and dignity. Now, with the serious threat of an outbreak of COVID-19 in these camps, this has become more urgent than ever. No EU state will benefit from a mass cluster of COVID-19 at the EU’s external borders.”

The current situation of 22-year-old Abdul Hakim is another apt illustration of refugees finding their lives on hold. Hakim does not know what will happen to him if he gets sick. Currently residing in Stuttgart but actually a registered refugee in Italy, where his asylum request was accepted a few years ago, Hakim used to live in Calabria, 370 miles away from Rome. The southern region is well known for poverty and corruption and mainly ruled by the mafia. 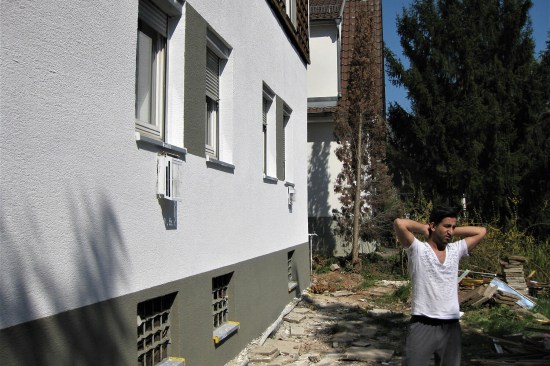 Afghan refugee Abdul Hakim stands in front of his house in Stuttgart, Germany, on April 6. Emran Feroz for Foreign Policy

“I could not find a job there. It was terrible. There was no real infrastructure, and nobody cared about refugees,” Hakim said. But he’ll still have to return, and since the outbreak of COVID-19 in Italy, Hakim has been unable to do so. His Italian health insurance is, he has been told, “just for emergencies.” In the middle of a global pandemic that has ravaged Italy, he does not know what this actually means.

“The current crisis reveals that we [refugees] are not important at the moment,” Hakim said. “The people in Western societies are now concerned about themselves. They are not interested in others, especially not in refugees.” He says he has heard about refugees who, when they recently visited medics or pharmacists, were often sent away with halfhearted diagnoses and cheap medicine.

In some cases, the simple act of visiting a doctor even becomes unthinkable. When COVID-19 reached neighboring Austria, 30-year-old Reza Ali (whose name has been changed at his request to protect him from possible retaliation) had other problems. After he arrived and started to build his new life in the city of Innsbruck almost 10 years ago, he received a notice of deportation in early March. Thus, he was forced to quit his job as a restaurant manager and disappear. “I don’t know what happened. I’m living here for so many years. I had a visa. I think my lawyer made a gross mistake. But now I have to keep a low profile until my problems are solved,” Ali told Foreign Policy in a phone conversation from an unknown location.

EU funds for Libyan militias forced thousands of migrants into dangerous Libyan detention centers. Now, after being evacuated, some of them are stuck as far away as Rwanda—with no idea if they will ever be resettled.

Ali did not consider the consequences of becoming sick and eventually being infected. But at the moment, he is hiding himself from Austrian authorities who want to force him to return to Afghanistan and dares not visit a hospital.

In fact, Austria effectively paused the right of asylum at its borders. According to the government in Vienna, refugees are not allowed to enter the country until they prove that they are not infected by COVID-19. Critics say that demonstrating such a proof is impossible. Additionally, they believe that the government’s move is violating basic human rights and the state’s constitution.

According to Ponthieu of MSF, there needs to be a moratorium on migration control agendas. States should take all necessary measures to include migrants and refugees in their coordinated responses to the outbreak. In an email conservation with Foreign Policy, Ponthieu underlined that “migration agendas are still being put above people’s health and lives.”

In early 2018, more than 250,000 Afghan migrants lived in Germany. Tens of thousands of them took refuge in the country during the last several years, while others arrived in the 1980s and 1990s. Mohammadi arrived in Germany shortly after Europe’s so-called refugee crisis started in the summer of 2015, when hundreds of thousands of people from Syria, Afghanistan, Iraq, and African countries headed for countries such as Germany, Austria, France, Sweden, and Norway. Back then, Mohammadi passed the Balkan route and spent some time in Bulgaria, Serbia, and Hungary, where he lived in overcrowded and dirty camps. “It was difficult and terrible. The people who live there are truly doomed,” Mohammadi said.

At the moment, more than 146,000 COVID-19 infections have been recorded all over Germany. More than 4,600 people have died because of the virus so far. German authorities are still concerned about a possible collapse of the country’s health care system.

Most EU countries are acting hesitantly in helping refugees. After weeks of debate, Germany agreed to take part in a project to resettle up to 1,600 unaccompanied minors from Greek camps. The first 47 minors arrived last Saturday. While German authorities agreed to take around 500 of them, other countries like Luxembourg pledged to accept a dozen.

But Marquardt, the European Parliament member, believes that this is a cynical political charade. While Germany agreed to take some refugees, the country also underlined that it would solely focus on unaccompanied minors who are female. According to Marquardt, that grotesque demand reveals that most refugee-related discourses are being dominated by far-right views and narratives.

NEW FOR SUBSCRIBERS: Want to read more on this topic or region? Click + to receive email alerts when new stories are published on Pandemics, Europe

EU funds for Libyan militias forced thousands of migrants into dangerous Libyan detention centers. Now, after being evacuated, some of them are stuck as far away as Rwanda—with no idea if they will ever be resettled.