Eleven massive dams straddle the mighty Mekong River before it leaves China and flows into Myanmar, Laos, Thailand, Cambodia, and on into Vietnam. Yet I have long been skeptical  that China could use those 11 upstream dams, massive as they are, to turn off the tap for the countries downstream. Too many people’s livelihoods, including 20 percent of the world’s freshwater fish catch, are dependent on the monsoonal ebb and flow of the Mekong. Yes, dams might store water for a time, but eventually that water must flow downstream through generators’ spinning turbines or open floodgates. Holding on to that water for leverage seemed like a diplomatic blunder.

Since China began building these dams in the early 1990s, the downstream countries have worried China could use its massive cascade of reservoirs—they have a capacity to store as much water as is in the Chesapeake Bay—to hold them hostage. When I gave talks on my recent book, Last Days of the Mighty Mekong, I often felt audiences were disappointed that I avoided reflexively painting China as the upstream boogeyman. The way the downstream countries of Laos, Vietnam, Thailand, and Cambodia build dams and extract sand, fish, and water from the river can also harm a fragile system.

China considers water management data to be a state secret, and, barring new evidence, it has always been difficult to reach defensible conclusions about China’s management water levels in the Mekong River. That is, until this month, when remarkable new data became public. It shines a dramatic light on how much water China’s upstream dams have blocked—even as downstream countries suffered through unprecedented drought.

Every year, the Mekong River rises and falls in cycle with the rainy season, when a massive pulse of water driven by monsoon rains and Himalayan snow melt flows downstream. Yet along the Thai-Lao border between June and November of last year the mainstream of the Mekong ran dry, the river bed and shoals were exposed, and isolated pools of flopping fish were unable to reach their spawning grounds.

That July, as the mainstream’s level fell so far that irrigation pumps could not reach it, the Thai government mobilized its army to conduct relief efforts. In the fall, Tonle Sap Lake will typically fill with monsoon waters rushing in from the mainstream for five months, providing Cambodians with up to 70 percent of their protein. Last year, the expansion of the lake, often described as the Mekong’s heartbeat, lasted just five weeks, and reports suggest it produced a fraction of the normal 500,000 tons of food.

Impact of the Nuozhadu Dam on the Mekong River 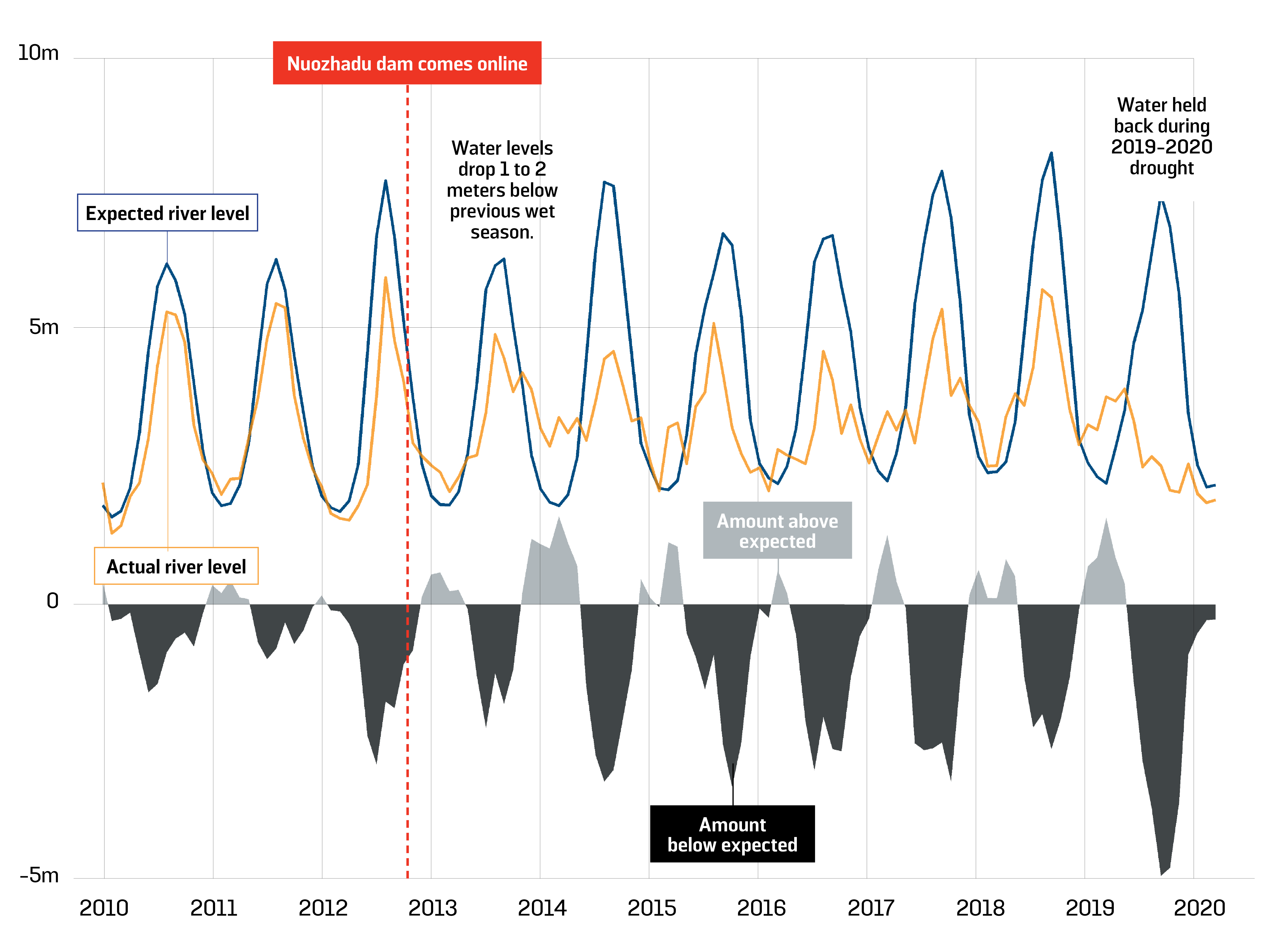 Observers, myself included, initially concluded that the abysmally low levels in the mainstream were due to low precipitation in the broad Mekong Basin. An El Niño weather pattern still today leaves most of the region suffering from its worst drought on record. In Vietnam’s Mekong Delta, millions of people are currently without access to freshwater. But a new study from the U.S-.based climate consultant Eyes on Earth provides us with a different reason: For six months in 2019, China’s dams blocked an unprecedented amount of water from entering the lower Mekong. The amount of water withheld was so large that, for the first time since modern records have been kept, there was no monsoon-driven rise in water levels just over the Chinese border in Chiang Saen, Thailand.

Eyes on Earth’s new data also shows that while an extreme drought persisted downstream, China’s section of the river, home to many of its massive dams, was wetter than usual. Eyes on Earth’s data shows the upper reaches of the Mekong Basin received above-normal amounts of water—nearly all of which was held back. My team corroborated that evidence with remote sensing data from Google Earth Engine. If China’s dams were not there to alter flow between the upstream and the downstream, then there would have been enough water in the mainstream to keep it at or above normal levels for most of the Thai-Lao border area.

Comparing Water Levels on the Mekong

This comparison shows the extent of the Mekong drought on the Thai-Lao border (top) and the Tonle Sap Lake (bottom) on July 15, 2019, compared to a normal monsoon season on the same date in 2017.

In addition to the major finding that during the 2019 monsoon, China’s dams totally prevented the Mekong mainstream from filling itself along the Thai-Lao border, the study also reveals that China has been restricting more and more water over time—particularly during the monsoon seasons—since its behemoth Nuozhadu Dam went online in stages between 2012 and 2014. Additionally, the study’s evidence explains the extreme floods that happen out of nowhere along the Thai-Lao border during the dry season, sometimes causing the river level to jump several meters overnight and delivering millions of dollars in damages to local riverside communities. (My research team took a deep dive into these other findings here.)

Jinghong Dam: This monthly progression of satellite images taken of the reservoir above the Jinghong Dam on the Mekong in China shows the reservoir was mostly full for the 12 months from May 2019 to April 2020. This reservoir is the most downstream of China’s 11 megadams and its releases directly impact the gauge reading in Chiang Saen, Thailand. None of China’s 11 upstream Mekong reservoirs show evidence of increasingly low levels throughout the 2019 monsoon season.Planet Explorer

Nuozhadu Dam: The monthly progression of satellite images taken of the reservoir above the Nuozhadu Dam on the Mekong in China shows the reservoir gradually filling as the monsoon season progresses and remaining full until April 2020. The reservoir of the dam is one of the largest in the world and, to illustrate, can store about half of the water in the Chesapeake Bay.Planet Explorer

These are important findings, not just for the results but the methodology. For the first time, it is possible for researchers and Mekong watchers outside of China to monitor the operations and impacts caused by China’s dams. Eyes on Earth’s methods are easily replicated, relatively inexpensive, and have the capability to be monitored in near-real time. Daily satellite imagery from private imaging firms also can clearly show what’s happening in those upstream reservoirs.

Still, China’s upstream actions are puzzling, particularly the 2019 decision to break the Mekong mainstream by restricting more water than ever before. Is this the result of a coordinated policy to bring the Mekong countries to heel? Beijing might simply prefer to use the water before sending it downstream, but inducing record-low river levels and driving a potential food security crisis hardly seems like a rational method for improving Chinese diplomacy in its backyard. Alternatively, perhaps competition or corruption networks between dam operators and the government are preventing accurate reservoir readings from making their way to the decision tables in Beijing where the Mekong diplomacy shots are called. 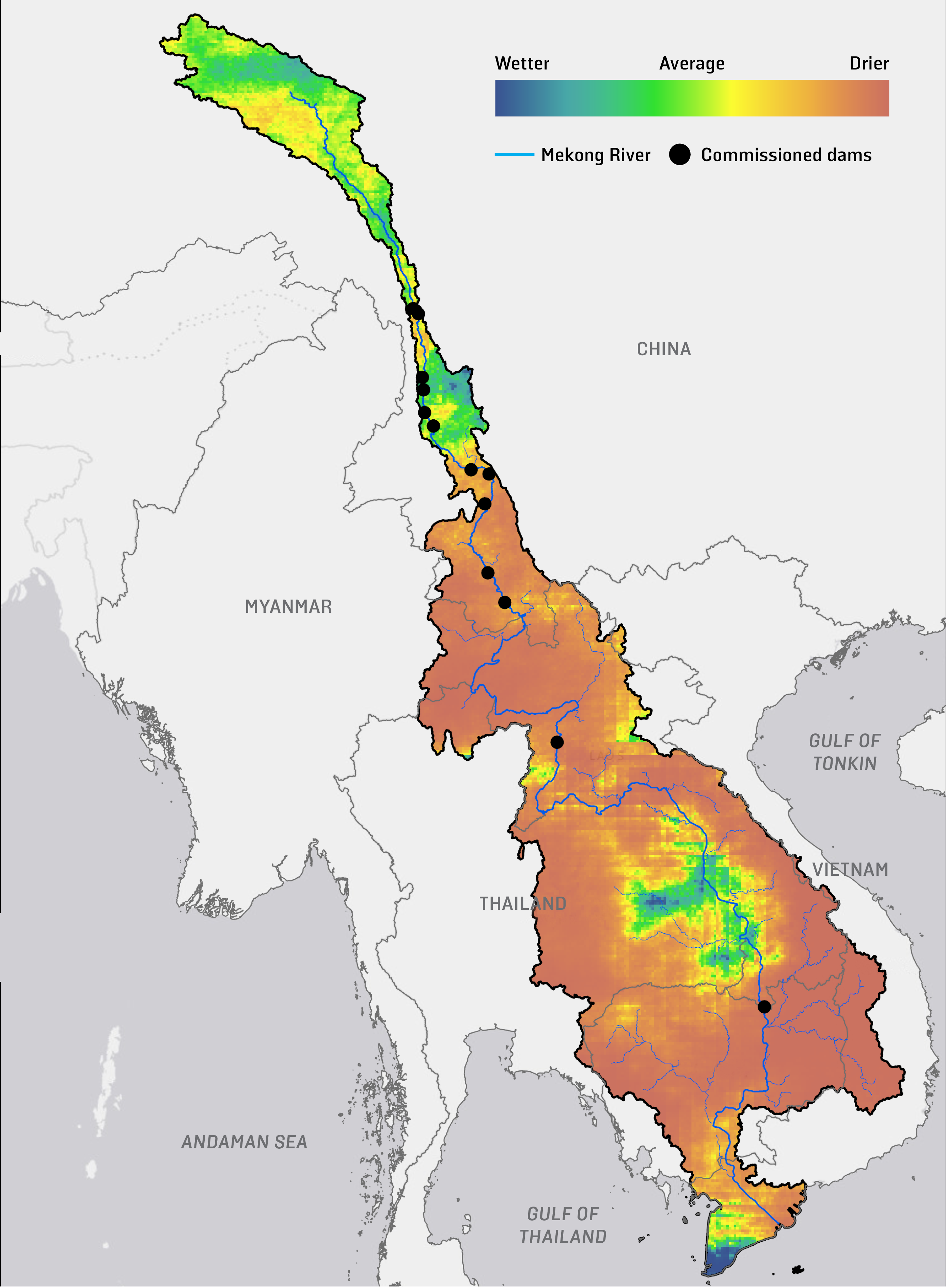 While Beijing prefers to keep transboundary river discourse inside a black box, we know that evidence-based processes from outside sources can have a powerful impact on China’s closed politics. In 2008, as Beijing’s skies became increasingly polluted from industrial emissions and automobile exhaust, the U.S. Embassy in Beijing began publishing air quality readings to show just how dangerous Beijing’s air was to breathe. While the Chinese government denied the data’s validity, the embassy numbers were increasingly embraced as common knowledge by Beijingers. Eventually the Chinese authorities installed air quality monitoring systems throughout the country and embarked on an effective educational and policy campaign to curb air pollution. Many developing countries with high levels of air pollution also followed China’s example.

Eyes on Earth’s data, which is derived from peer-reviewed methods and has been described to me as “beyond reproach” by experienced hydrologists, is equally impeccable. And as initially with the air quality data, China’s Ministry of Foreign Affairs has categorically rejected the Eyes on Earth study as a U.S. government-driven conspiracy—a claim made even before the U.S. government-funded study was published on Mekongwater.org, the official website of the U.S. State Department-led Mekong Water Data Initiative. But if the evidence continues to show the degree to which China is restricting water from the Mekong mainstream, perhaps Beijing will be compelled to make an about-face.

They could decide to share data with downstream countries from its numerous monitoring stations and reservoirs upstream, something China has been loath to do since the first dam was built three decades ago. Given the fragile ecology of the downstream Mekong, ever-increasing drought, and the tens of millions of people who rely on the river to survive, it is in China’s own best interests to cooperate with its neighbors.

Science has reduced my own reluctance to draw firm conclusions on the impact of China’s upstream dams. It may change minds in Beijing and across Southeast Asia too.

Brian Eyler is a senior fellow at the Stimson Center and director of Stimson’s Southeast Asia program. He is the author of Last Days of the Mighty Mekong.