Facebook is making its single biggest investment in India’s Reliance Jio. The move could impact the online future of the world’s largest democracy.

Welcome to Foreign Policy’s weekly South Asia Brief. We’re leading with a story that isn’t about the pandemic this week: Facebook’s $5.7 billion investment in India and why it matters. Also, deadly clashes in Afghanistan threaten the peace process, Sri Lanka marks a year since its deadly Easter Sunday bombings, and garment industry layoffs disrupt Bangladesh.

Welcome to Foreign Policy’s weekly South Asia Brief. We’re leading with a story that isn’t about the pandemic this week: Facebook’s $5.7 billion investment in India and why it matters. Also, deadly clashes in Afghanistan threaten the peace process, Sri Lanka marks a year since its deadly Easter Sunday bombings, and garment industry layoffs disrupt Bangladesh.

Amid a global economic recession, Facebook made a surprising announcement on Tuesday. It is spending $5.7 billion for a 9.99 percent stake in Jio Platforms, the tech subsidiary of India’s Reliance Industries. The investment—the single largest in Facebook’s history—is a giant bet on India’s online growth.

The deal could also speed up Jio’s evolution from a cellular internet service to a broader one-stop digital universe—perhaps something like China’s WeChat. News of the deal sent Reliance Industries’ share price soaring on Wednesday, enabling the chairman, Mukesh Ambani, to once again surpass Alibaba’s Jack Ma as Asia’s richest man.

What’s in it for Facebook? In the announcement on Tuesday, Facebook CEO Mark Zuckerberg wrote that he wanted to thank “Mukesh Ambani and the entire Jio team for their partnership”—a rare sentiment from the side investing big money. India has long been a major growth market for Facebook, but one that it has yet to successfully monetize. There are more than 400 million WhatsApp users in India—Facebook owns the messaging app—and its core platform has more users in India than in any other country.

And there is still room for Facebook to grow: At least half a billion Indians remain offline. Partnering with Jio and its influential owner Ambani may help the company navigate an increasingly protectionist Indian market. Ambani himself has long advocated that New Delhi should take steps against “data colonization” by global tech giants. The new partnership may soften his stance, as well as India’s trend toward protectionism. As I’ve described in my 2018 book India Connected, Facebook has previously been rebuffed by Indian regulators—such as when it tried to launch a free, gated version of the internet in 2016. Jio, now the biggest cellular internet provider in India, is a valuable friend for Facebook to have in its corner.

What’s in it for Reliance Jio? This is a bit more complicated. Reliance has been described as India’s Exxon, AT&T, and Amazon rolled into one. While it has fulfilled its goals of becoming an energy giant and the biggest telecommunications player, it has yet to seriously challenge Amazon or Flipkart as an e-commerce platform. This is where Facebook can help.

Since 400 million Indians already use WhatsApp, a tie-in with JioMart—Reliance’s online retail service—would connect tens of millions of small-business owners with a larger base of potential consumers. The partnership could upend India’s e-commerce market. While Jio has its own apps for messaging, movies, and health care, it has not been able to monetize those subsidiary businesses. Joining the country’s most-used mode of communication could boost its hopes of becoming a retail giant and speed up India’s transition to digital commerce.

Why it matters. Beyond the economic implications, there is the larger question of what kind of internet India will have in the future. Will it be free and fair, as it is in much of Western Europe? Or will it be gated and controlled, as it is in China? If approved by regulators, the Facebook-Jio deal suggests that India’s data localization plans may not be absolute. It also suggests that Western tech behemoths will continue to have an important stake in India’s future.

The timing of Facebook’s investment, while likely long in the works, may also be telling. The coronavirus pandemic has led companies around the world to seek more local and more secure supply chains. In Facebook’s case, befriending a powerful Indian partner could help it gain greater local influence in a market that remains the digital world’s biggest hope for growth.

Coronavirus still rising as Ramadan begins. South Asia has now recorded more than 38,000 confirmed cases of the coronavirus. As we have reported for several weeks, nationwide lockdowns have helped slow the spread of the pandemic, but they haven’t been able to stop it entirely. Now, some countries are allowing certain sectors to get back to work. In India, for example, farm and industrial activity may begin in rural areas.

One concern for South Asia, which is home to more than 500 million Muslims, is the start of the holy month of Ramadan on Friday. In Pakistan, the government has caved in to demands from religious clerics to open mosques for prayers as long as they follow a list of rules, including maintaining a six-foot distance between worshippers. Given the country’s high population density, enforcing those rules may be easier said than done.

Trump’s immigration plans. With a single tweet on Monday night, U.S. President Donald Trump sent South Asian workers and many others in the United States into a panic. “In light of the attack from the Invisible Enemy,” he wrote, referring to the coronavirus, “I will be signing an Executive Order to temporarily suspend immigration.” For now, Trump has not ordered a halt to specialty visas such as the H-1B program, through which tens of thousands of Indians work at U.S. tech companies and banks—but he has banned the issuance of new green cards. Most of the 800,000 immigrants in the United States currently waiting for a green card are Indian citizens.

Sri Lanka attack anniversary. Tuesday marked one year since the deadly Easter Sunday suicide bombings across Sri Lanka that killed 269 people. The country marked the anniversary with two minutes of silence, but there were no large-scale events because of the nationwide coronavirus curfew. Colombo says the local militant group National Thowheed Jamath was responsible for the coordinated bombings, though the Islamic State has also claimed involvement.

Deadly clashes in Afghanistan. Taliban forces killed dozens of Afghan security force members in separate clashes in the country’s east and north this week, threatening an already fragile peace process. The clashes come despite recent high-level meetings in Doha, Qatar, between the commander of U.S. forces in the region and the Taliban’s top leadership. The militant group has so far held off on targeting foreign troops.

The coronavirus pandemic has led to a steep drop in global demand for all kinds of commodities, including retail clothing. In Bangladesh, factories have now furloughed or laid off more than half of the country’s 4.1 million garment workers, according to CNN. What percentage of Bangladesh’s total exports do garments account for? 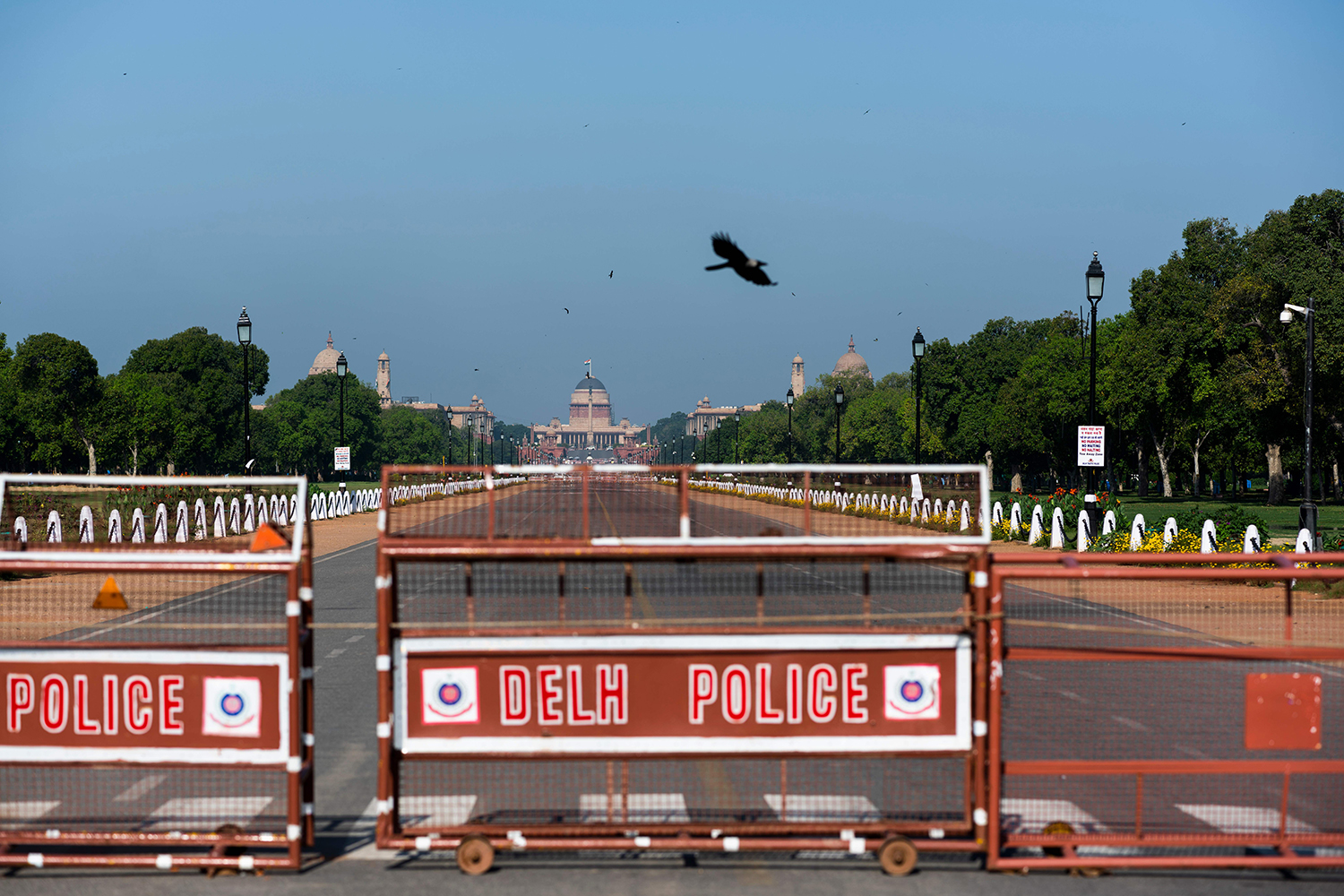 A crow flies over a deserted street near the presidential palace in New Delhi on April 2.JEWEL SAMAD/AFP via Getty Images

Clear blue skies. There’s an unexpected silver lining to the coronavirus-related shutdowns across South Asia: cleaner air. One week after India’s lockdown was announced on March 24, average concentrations of PM 2.5—the most harmful level of particle pollution—fell by 71 percent in New Delhi. Once-smoggy surroundings have given way to clear blue skies. Residents report that the air has for once lost its smoky, metallic taste. People living hundreds of miles from the Himalayas can now see its snow-capped peaks. The drop in pollution will hopefully provide respite to the region’s growing number of asthmatic patients—and perhaps set an example for industrial changes that could be put in place once the pandemic subsides.

Not only do garments account for four-fifths of Bangladesh’s total exports, but they are also responsible for 16 percent of the country’s total economic activity. After companies such as Zara and Unimark cancelled bulk orders, more than 2 million garment workers have now lost their jobs. Several million more workers in transportation and other parts of the garment supply chain could also find their livelihoods endangered.

NEW FOR SUBSCRIBERS: Want to read more on this topic or region? Click + to receive email alerts when new stories are published on Science and Technology, India, South Asia