Not Even the Coronavirus Can Overcome Northern Ireland’s Divisions

Even in the face of an existential crisis, the country’s political leaders default to battles over culture and identity.

“The integrity of their quarrel is one of the few institutions that has been unaltered in the cataclysm which has swept the world,” said Winston Churchill, then-British secretary of state for the Colonies, to describe the political situation in the United Kingdom (which still included Ireland) shortly after World War I. 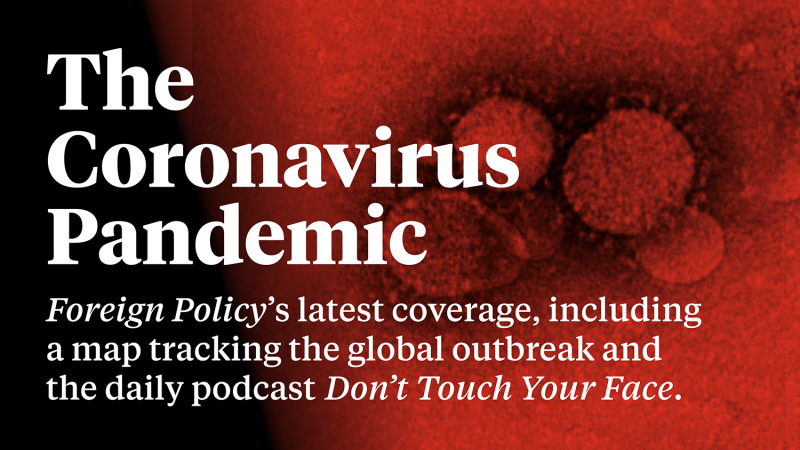 British politics were then convulsed by a major struggle between Ireland’s nationalists (those who sought a fully independent Irish Republic) and unionists (those who wanted the country to remain part of the United Kingdom) over the constitutional future of Ireland.

The goalposts have moved markedly since then, but Churchill’s words could easily be applied to the situation in Northern Ireland today. As national governments across the world scramble to contain the spread of the coronavirus and observers opine about its long-term consequences, Northern Ireland’s main parties have retreated to their familiar camps, approaching the crisis from their age-old stances on the disputed status of Northern Ireland and its constitutional relationship with both the Irish Republic and the United Kingdom.

The timeline of the spread of the virus in Northern Ireland initially mirrored that in the Irish Republic. The government reported its first case on Feb. 29, and although the rate of the spread of the virus across the island had been similar for most of March, the rate of increase has been consistently higher in Northern Ireland since early April.

Northern Ireland’s response to the outbreak was complicated by those of the British and Irish governments. Dublin acted quickly and decisively, and it received widespread praise from across the political spectrum. On March 12, less than two weeks after the country’s first confirmed case, Irish Taoiseach (prime minister) Leo Varadkar announced that all schools, universities, and child care facilities would close to help stop the spread of the virus. He also introduced a 430 million euro (roughly $465 million) relief package to help the Health Service Executive deal with the impact. Political leaders canceled their annual high-profile St. Patrick’s Day visit to Washington, which followed a decision by the government to cancel all St. Patrick’s Day parades and festivals.

Varadkar delivered a widely praised address to the nation, in which he said, “In years to come, let them say of us, ‘When things were at their worst, we were at our best,’” and assured “all those living in the shadow of what is to come—we are with you.” Hugh O’Connell, a political correspondent for the Irish Independent, said the speech could be “the defining moment of his political career.” Varadkar—a qualified physician—also made an important public display in early April by announcing that he would be working weekly shifts as a doctor at various hospitals across the country.

By contrast, the British government was initially slow to respond to the outbreak throughout the first half of March, and it was roundly criticized by health officials and members of the public alike for its lack of seriousness and confused message. As its neighbors implemented stay-at-home orders and shut down public gatherings, Prime Minister Boris Johnson refused to take similar action, instead urging people with symptoms to stay home but doing little to actually enforce that recommendation. The government also came under heavy criticism in mid-March for not canceling sporting events and other large public gatherings, including the Cheltenham Festival—a major horse-racing event held on March 10-13 that featured a daily attendance of more than 60,000 people.The British and Irish governments’ sharply divergent strategies opened a new battleground in Northern Ireland.

More controversially, the government’s chief scientific advisor, Patrick Vallance, caused a stir when he told reporters on March 13 that while lockdowns might provide temporary relief, the ultimate solution was “herd immunity”—some people would need to be infected so that the rest of the population could strengthen their own natural defenses. The resulting outcry forced Health Secretary Matt Hancock to say publicly that “herd immunity is not our policy,” but the image of the government as a cold, unfeeling monolith stuck.

The British and Irish governments’ sharply divergent strategies opened a new battleground in Northern Ireland. With nothing in the way of a joint approach coming from London or Dublin to provide some clarity, the country’s two largest political parties—Sinn Fein and the Democratic Unionist Party (DUP)—instinctively defaulted to their positions on the constitutional status of Northern Ireland to formulate their respective responses to the pandemic.

Sinn Fein is Northern Ireland’s largest nationalist party, and it is best known internationally as the former political wing of the paramilitary Provisional Irish Republican Army, which waged a low-level insurgency against British security forces from 1969 until 1997. The party’s ultimate political aspiration is to unify the entire island of Ireland into a single democratic socialist republic. It identifies strongly with Ireland and Irish culture, and its members are almost exclusively Irish and Catholic. Since the end of the conflict, it has spearheaded several initiatives aimed at putting traditional Irish culture on par with British culture in Northern Ireland, including securing legal protections for the Irish language, a stance that helped shutter the country’s devolved legislative assembly for three years.

Northern Ireland Is in a Culture War. Brexit Is Making It Worse.

Nationalists and unionists are in a battle for cultural supremacy, complicating the U.K.’s withdrawal from the EU.

Johnson government admits its strategy of allowing the virus to spread and build up immunity was a failure but stops short of mandatory controls.

Britain has been exceptionally slow to respond to the pandemic. Trump's decision to omit the U.K. and Ireland from his European travel ban won't help halt the spread of the virus.

On the other side, the DUP is the country’s leading unionist party, and although it was never directly tied to any paramilitary organization, its members have maintained links to several armed groups at various points in its history. Members of the DUP identify primarily as British and Protestant, and they are staunch defenders of British cultural symbols, practices, and traditions. More than just maintaining Northern Ireland’s place in the United Kingdom, the DUP is guided by the belief that Northern Ireland should be treated exactly the same way as every other part of the country. That political philosophy motivated its opposition to both Johnson’s and former Prime Minister Theresa May’s Brexit withdrawal agreements, complicating the United Kingdom’s departure from the European Union for almost four years.

These undercurrents have influenced the parties’ responses to the crisis. Sinn Fein advocated strongly to apply Dublin’s approach to Northern Ireland, calling for the immediate closure of all schools. “It’s vital that we have a joined-up approach across the island,” said Michelle O’Neill, the party’s northern leader. The DUP stuck more closely to the British government’s line. Party leader Arlene Foster told reporters that schools would close eventually but deferred that decision to a later time, and the party rejected the notion that an all-Ireland approach was needed to combat the crisis. Members and supporters of both parties accused the other of using the crisis to advance their ultimate political aims.The parties have since developed something that resembles a joint approach, but the recourse to culture and identity won’t go away.

The school closure row was a relatively brief affair, and it came to an abrupt end when Johnson announced a nationwide lockdown in the United Kingdom on March 23, ordering the closure of all schools, nonessential businesses, and requiring people to stay in their homes. The DUP swung strongly behind the British government, with Foster immediately welcoming the new measures, saying that “we need to follow this advice to save lives and protect our hospitals. … It won’t be easy, but it’s for the best.” Sinn Fein, never quick to give the British government any credit, was conspicuously quiet, though Sinn Fein Member of Parliament Orfhlaith Begley did warn that any government policy needed to take into account people who cross the border for work.

The parties have since developed something that resembles a joint approach, but the recourse to culture and identity won’t go away. On April 10, former Ulster Unionist Party leader and current Health Minister Robin Swann urged the British government to deploy troops to Northern Ireland to help distribute medical equipment to hospitals. Sinn Fein, which is highly sensitive to the British Army’s historic role in Ireland, immediately criticized Swann’s request and rejected the notion that there was a need for assistance from the security forces. All of this exposes the raw foundation of Northern Irish politics: Even in the face of an existential crisis, the instinct of the country’s political leaders is to rely on their ethnonational impulses to make major decisions.

In many parts of the West, the severity of the pandemic is forcing political parties to at least temporarily overcome deep political divisions and collaborate in previously unprecedented ways. In the United States, for example, Republicans have pushed through a comprehensive public spending package that would have been unimaginable for members of the party even a few weeks ago.

By contrast, politics, culture, and identity still reign supreme in Northern Ireland, and, as always, political leaders will allow their ancient orthodoxies to color their response to the crisis at hand. The consequence this time is a prolonged public health emergency, revealing that Northern Ireland’s leaders will always put their ethnonational considerations at the front of their political calculus, even when their constituents’ lives are at risk.

Northern Ireland Is in a Culture War. Brexit Is Making It Worse.

Nationalists and unionists are in a battle for cultural supremacy, complicating the U.K.’s withdrawal from the EU.

Johnson government admits its strategy of allowing the virus to spread and build up immunity was a failure but stops short of mandatory controls.

Britain has been exceptionally slow to respond to the pandemic. Trump's decision to omit the U.K. and Ireland from his European travel ban won't help halt the spread of the virus.