‘We’re Doing What the Government Won’t Do’

In Mexico, a growing citizen movement is searching for thousands of victims of forced disappearance in the absence of enforcement of government policies.

TIHUATLÁN, Mexico—Less than an hour after arriving at La Gallera, an abandoned ranch on the outskirts of Tihuatlán, in Mexico’s Veracruz state, on Feb. 18, the Fifth National Search Brigade for Disappeared People found human bone fragments just beneath the surface of the soil behind the house. The discovery meant that the group would have a long day ahead: The site, where searchers had first found remains three years before, should have been clean.

Forensic experts from both the state and national attorneys general’s office had conducted searches on the property four times in the past, after previous discoveries of bodies, clandestine graves, and human bones. They’d concluded that no more human remains would be uncovered, and, in theory, the site was turned over to the Veracruz Civil Forces, which would protect the property against evidence tampering. When the brigade arrived, though, security forces were nowhere to be found. Throughout the two weeks the brigade operated, from Feb. 7 to 22, the members frequently repeated a phrase that’s become, for some, a mantra: “We’re doing what the government won’t do.”

The nongovernmental search brigade, the fifth one organized by the Mexico City-based Network of National Links (Red de Enlaces Nacionales), is the product of a growing citizen movement against forced disappearance in Mexico. Across the country, relatives of disappearance victims have formed collectives to search for their loved ones, conducting activism and frequent searches in their hometowns, and coming together for larger searches with the brigade. Their activities range from searching for human remains, to pursuing legal action on their cases, to visiting medical forensic departments, prisons, and rehab centers where their family members could be, to investigating their cases through their own means.

The Mexican government currently reports the number of disappeared people at just over 61,000, with the vast majority of these disappearances reported since the beginning of the drug war in 2006. But due to low reporting rates, the total number is likely far higher. By some estimates, Mexico’s drug war is second only to Colombia’s armed conflict for the highest number of disappeared victims in the Americas since the mid-20th century.

As with most crimes in Mexico, forced disappearance cases largely go unsolved. Many of the cases that have been investigated, though, have pointed to collusion between security forces—including military, federal, and municipal police—and organized crime groups. The state has long been implicated in forced disappearances, whether by collusion or negligence. Many relatives of victims recount being discouraged from reporting their disappeared family members to the police, and investigations are slow, if existent.

The passing of the General Law on Disappearances, in 2017, established various mechanisms to address the issue of forced disappearance, including state- and national-level search commissions. But many commissions lack adequate funding, and few accountability measures exist to ensure they fulfill their obligations. Family members of the disappeared continue to encounter negligence both from the search commission and from state and federal prosecutors. The collectives frequently find human remains at sites that officials have already searched. For over a decade, family members have demanded that the Mexican state permit the intervention of the United Nations Committee on Enforced Disappearances, in order to promote independent and expert investigations of forced disappearances. (A case for the state to recognize the U.N. committee’s intervention is currently before the Mexican Supreme Court.)

The state has repeatedly failed to confront the magnitude of the crisis. When President Andrés Manuel López Obrador took office in 2018, his stated commitment to disappearance victims seemed to hint at a change in the state’s approach. López Obrador has publicly stated that the state will hold back no resources to achieve justice for disappearance victims in Mexico. But the work of this year’s search brigade shows that the Mexican state has a long way to go to address forced disappearance. Despite the current administration’s vocal discourse in support of the movement for the disappeared, this year’s brigade encountered institutional neglect from government institutions at all levels, culminating in the discoveries at La Gallera. 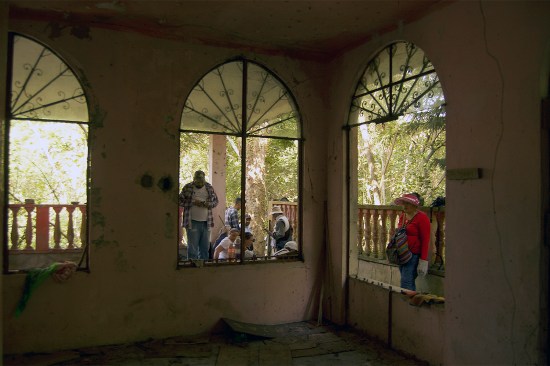 The Fifth National Search Brigade for Disappeared People found dozens of bone fragments at the property known as La Gallera in Tihuatlán, Veracruz, on Feb. 18. Madeleine Wattenbarger for Foreign Policy

In February, the brigade brought together nearly 300 representatives from 74 collectives of relatives of the disappeared throughout Mexico, the largest contingent yet. Leading up to this year’s brigade, coordinators faced institutional silence from various government organs. The Executive Commission for Attention to Victims typically provides financial support to relatives of victims, including security and funding for search efforts by collectives on the local or national level. Amaya Ordorika, one of the coordinators of the brigade, said that the brigade had a harder time this year coordinating with authorities and receiving resources than in the past: A member of the coordinating team of the Network of National Links estimates that 80 to 100 family members who had registered were no-shows, many because of lack of resources from the commission. (Both the commission and the Secretariat of the Interior declined to comment.)

In the brigade’s opening press conference, María Herrera, the mother of four disappearance victims and founder of the Network of National Links, condemned the government’s lack of support. “When we need security to take care of the citizens, there’s nothing,” Herrera said, “but to repress us, to try to intimidate us, they don’t think twice.” The discoveries during the brigade continued to emphasize the historic negligence with which authorities have treated disappearance investigations. The La Gallera property in particular came to represent that lack of rigor.

The collective Familiares en Búsqueda María Herrera Poza Rica, based in the nearby city of Poza Rica, first visited La Gallera three years ago, on Feb. 1, 2017. The property was known to have been taken over by the Zetas gang in the early 2010s, and searchers had received tips about the site. They encountered six bodies, which they turned over to Veracruz’s prosecutor’s office. A month later, the collective returned to the site with authorities. They found 22 sites containing human remains, including the skull of a young child; authorities promised to fully investigate the site, including the large oven located in a structure behind the house, and to provide security to the site. Later that month, the collective returned to the property to find no security and the evidence still exposed to the elements. The following November, the collective returned to search for a week, accompanied by the federal attorney general. They located over 200 bone fragments and the skull of a minor.

During the brigade’s visit to the property in 2020, several people who’d participated in earlier searches noticed aberrations in the condition of the site compared with previous visits. After brigade members found the first bone fragments just feet from the back door, they called in state forensic experts, and the group began to comb the area around the house. The searchers found bone chips by the back staircase, under a pile of bricks and a cement slab, and under thin layers of leaves and soil. Within half an hour, they’d found half a dozen points with suspected human remains in the 30 feet or so outside the door.

As the day wore on, the atmosphere among the searchers gathered grew ever weightier. Bones seemed to rise from all corners of the property. The horror of the site was twofold. For the brigade members, the carelessness with which the government had treated the remains added to the brutality with which criminals had killed their victims.

On the final day of the brigade, following the closing press conference, authorities from the Secretariat of the Interior, the National Search Commission, the National Human Rights Commission, and state and federal attorneys general offices, in addition to officials from the U.N., joined a coalition of brigade members to return to La Gallera. They gathered around the cordoned-off search sites. Representatives from the Network of National Links read off a list of demands for the creation of a mechanism to take on forced disappearance in the northern zone of Veracruz. They proposed measures that would hold the state accountable for following up on the brigade’s discoveries, including conducting thorough searches in the points that the brigade identified and enforcing stricter search protocols.

Maricel Torres Melo, the founder of the collective Familiares en Búsqueda María Herrera Poza Rica, who had first visited the site, was among the family members gathered there in February. She told the authorities gathered that the collective considered La Gallera its own, a key piece of evidence for what may have happened to their family members. “A barbarity occurred here,” she told the group. “We don’t want this to happen again.”

In Veracruz alone, this year’s brigade discovered between 12 and 14 possible sites where bodies had been burned. Collectives across Mexico have found over 2,000 clandestine graves in the last decade. Despite voicing support, nearly two months after the brigade’s conclusion, authorities have yet to follow up on any of the brigade’s demands. Bodies found in previous searches at La Gallera have been identified, according to Torres Melo, but there have been no advances in identification of the bone fragments found in February. The sites the brigade identified remain uninvestigated.

The government may continue to claim commitment to the search, but a true reckoning requires addressing the institutional neglect, corruption, and impunity in Mexico’s judicial system. From prosecutors to police forces to search commissions, the authorities’ lack of accountability in completing their duties has caused investigations to come up short, while the families of the disappeared have repeatedly demonstrated they’re willing to hold institutions accountable for their negligence; the intervention of the U.N. Committee on Enforced Disappearances could reinforce that accountability. Until then, the families will continue to uncover the bones authorities have left behind.

Madeleine Wattenbarger is a journalist based in Mexico City, where she writes about human rights, politics, and culture. Twitter: @madeleinewhat

For Mexico’s President, Forced Disappearances Could Make or Break the Justice System

A new investigation into the 2014 Ayotzinapa case may bring more answers but doesn’t guarantee real changes.