The view from the ground.

Climate change has altered Alaska’s landscape, and the experiences of Arctic mushers are the canary in the coal mine.

ANCHORAGE, Alaska—On a windy morning in early March, Sean Underwood was leading his team of sled dogs out of a race checkpoint in White Mountain, Alaska, when he sensed something was wrong.

The winter weather was unforgiving. But Underwood knew the risks he would take as he competed in the Iditarod, an annual sled dog race from Anchorage to Nome, Alaska, with competitors hailing from the countries speckled around the Arctic Circle. He was one among 56 other mushers that year, and one of the 12 first-timers racing across the nearly 1,000-mile trail—which can take more than two weeks to complete.

ANCHORAGE, Alaska—On a windy morning in early March, Sean Underwood was leading his team of sled dogs out of a race checkpoint in White Mountain, Alaska, when he sensed something was wrong.

The winter weather was unforgiving. But Underwood knew the risks he would take as he competed in the Iditarod, an annual sled dog race from Anchorage to Nome, Alaska, with competitors hailing from the countries speckled around the Arctic Circle. He was one among 56 other mushers that year, and one of the 12 first-timers racing across the nearly 1,000-mile trail—which can take more than two weeks to complete.

“You could have gone and done laps in it,” Underwood said. “Even as we trekked through the shallower parts, it was hovering above my knee at certain points … [they were] extremely rare conditions.” 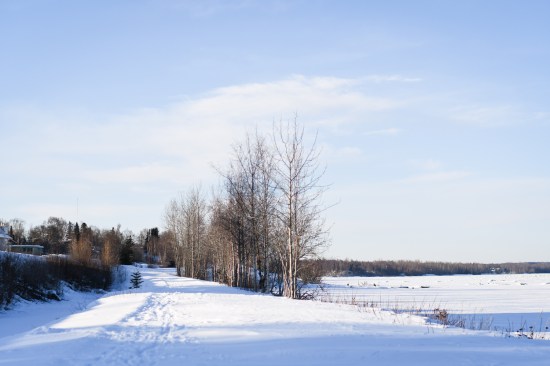 The Elderberry Park Coastal Trail in Anchorage, Alaska, is dusted with snow and flanked by sea ice on March 4.Kelly Kimball for Foreign Policy

Underwood and the veteran mushers Tom Knolmayer and Matthew Failor found themselves stranded. They struggled for hours through the quicksand-like slush caused by unseasonably warm temperatures. After losing feeling in their legs and feet, they decided the safest thing to do was to call for rescue. Soon, a team of snow machines and a National Guard helicopter arrived to pluck them from the competition—and re-mark a trail for the remaining mushers who weren’t far behind.

“This all started with us having mushed through a biblical-level storm from Elim to White Mountain,” Underwood said. “The typical temperature around there is zero degrees.” But that morning, it reached 36 degrees Fahrenheit—well above freezing levels—which triggered the dangerous alchemy of conditions they experienced that day.

This year, 22 Iditarod mushers ended their races preemptively—the second-highest scratch rate in the competition’s 47-year history. Nearly all of them quit due to tumultuous environmental conditions. In 2007, some 24 mushers ended the race prematurely for the same reasons. Scratch rates will likely climb in the coming years. Studies by the U.S. National Oceanic and Atmospheric Administration (NOAA) have shown cataclysmic decreases in sea ice and snow cover across the Arctic since the 1980s, which could lead to further climate anomalies and a suspension of the sensitive ecosystem’s fine balance. But these changes happening in Alaska—and in the Arctic Circle overall—aren’t only a musher’s problem. 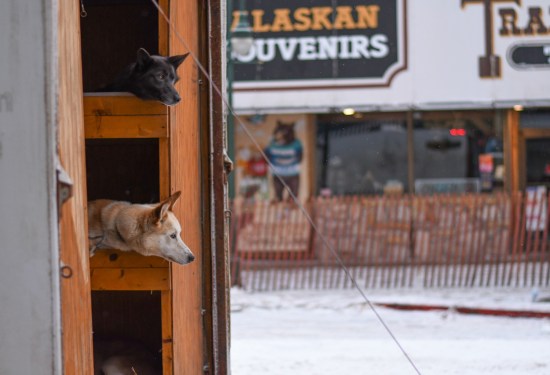 Because of where and when they travel, mushers are among the first witnesses to climate transformations that eventually stretch across the globe. A recent Arctic Report Card from NOAA found that the region is warming at a rate twice as fast as the global average, with the race’s starting line in Anchorage recording the second-highest winter temperatures in Alaska’s history. In winter 2019 alone, monthly temperatures were about 7.2 degrees Fahrenheit higher than normal, and the north Bering Sea where Underwood experienced his emergency was as much as 28.8 degrees Fahrenheit. Data sets that describe what are known as “climate normals” are taken from a three-decade average across the United States by NOAA every 10 years, the most recent of which was captured in 2010. The global temperature, meanwhile, also spiked last year, recording temperatures 1.6 degrees Fahrenheit above average—making it the third-warmest year on record.

“Alaska last year was at the epicenter of warmth for the entire globe,” said Brian Brettschneider, a University of Alaska Fairbanks researcher who works for the International Arctic Research Center.

For years, the Arctic region has posed as a canary in a coal mine in regard to climate change. Summers have elongated and winters have compressed, transforming the Arctic: Permafrost has rapidly begun to melt, with many perennially frozen locations reaching record-high temperatures. At best, these fluctuations can destroy the structural integrity of homes, airport runways, and city infrastructure. At worst, the region has transitioned from becoming a carbon sink, which absorbs excess carbon dioxide from the atmosphere, to one that expels more harmful amounts of carbon into the atmosphere. Based on studies by NOAA, the Arctic “is now contributing to, rather than slowing, climate change.”

This year, the state had its first traditionally cold winter in nearly a decade, with several consecutive days below zero degrees (some days get as low as negative 50 degrees Fahrenheit) and persistent high-elevation snow. But in the lead-up to winter, Alaska experienced the warmest summer and fall temperatures on record. Even as Alaskans celebrate the most ample snow in quite some time, the phenomenon is still part of a global climate anomaly. 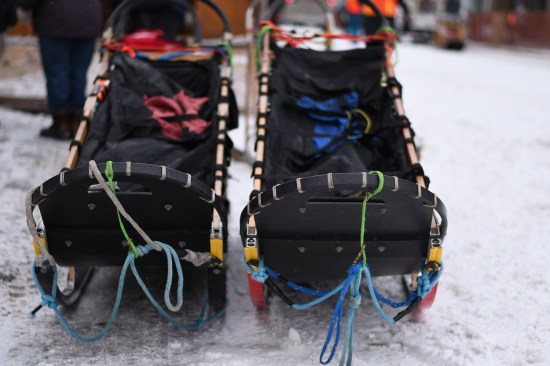 Two mushing sleds are set beside a mushing trailer ahead of the race. Kelly Kimball for Foreign Policy

“The issue is that southwest Alaska and western Alaska are some of the places with the most rapid change in terms of these temperatures,” said Ken Tape, an associate professor at the University of Alaska Fairbanks. The entirety of the Iditarod race takes place in the region Tape describes. “In the case of the Iditarod trail, a lot of these places aren’t even getting what you would describe as permanent snowfall.”

Snowfall is crucial to the safety of mushers, their athletic dogs, and the sensitive ecology of the land. But in recent years, some winters have brought rainfall instead of snow—an aberration in a region known for its constant snowfall from October to April.

Over the past several years, snow cover has disappeared increasingly earlier in the season from the landscape, and its geographical extent has shriveled, some of which is due to rapidly dwindling sea ice, which acts as a natural barricade to protect against weather extremes.A warming climate is something mushers have had to contend with for years—sometimes at great risk. In 2006, the veteran musher DeeDee Jonrowe experienced a close call as she competed in a smaller race outside of the coastal village of Unalakleet, Alaska. It had been an unusually mild winter, with less snowfall, and sea ice melting along the coast. As Jonrowe neared a bend along the Norton Bay, the sea ice she was racing on—which normally stayed through June—vanished from sight.

The race markers kept disappearing into water, she recounted: “The broken ice was so tall, you couldn’t always see what was going on [ahead of you].”

Jonrowe and the other competitors would soon discover that they were stranded on a massive, broken plate of ice with no safe return in sight. That same plate had been marked safe by race trailbreakers just one week earlier.

“They put an airplane in the air and found that … we were floating free, floating in the bay, and that whole plate of ice had broken away from the shore,” Jonrowe said.

Pilots from nearby Koyuk would eventually lead the mushers safely back to land by pointing out a new trail 50 miles north, where the ice plate touched back onto the remote coastline. 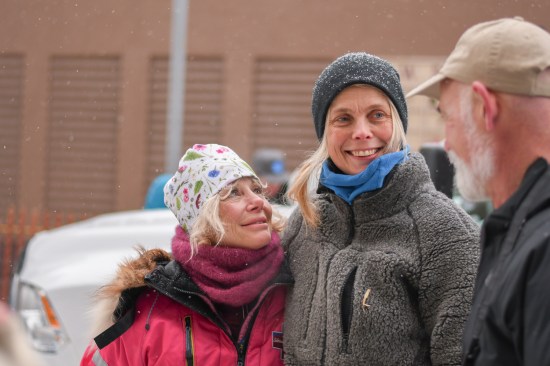 For mushers caught in the tumult of a rapidly changing world, races are more than a chance to show off canine brawn or cling to bygone traditions. The Iditarod in particular showcases Alaska’s history and resilience. It’s a sport with heart and indigenous roots; a horizontal Everest at the top of the world (which recently became one of the only U.S.-based professional sports to continue as the coronavirus spread around the world).

“I am living the history of our state,” said Jonrowe, who has completed the Iditarod 32 times and holds the fastest finishing record of any woman who has competed. “You’re utilizing your own skill, your own ability to read dogs, to read the weather, to listen to the stories of the elders.”

Such indigenous elders—and their kin—continue to pass along the tradition of mushing, which dates back thousands of years. Ryan Redington, a 14-time competitor with Inupiat Eskimo roots, said climate change is undeniably impacting how he trains.

“It’s been difficult to get miles on the dogs,” says Redington. To aid with this, he bought property in northern Wisconsin to improve his chances of experiencing snow from October to February—his training months. But such practices are cumbersome and costly—something that few competitors can afford. For Redington, whose grandfather founded the race in 1973, the sacrifice is personal. It may well prove the best chance of keeping the race alive.

“I’m honored to carry on the family tradition,” he said. “My grandpa ran in it 19 times. My father ran in it 14 times. Now it’s me and my brother that race in it. And, hopefully, one day our kids will race in it as well.”

Climate Change Requires Big Solutions. But Baby Steps Are the Only Way to Go.

NEW FOR SUBSCRIBERS: Want to read more on this topic or region? Click + to receive email alerts when new stories are published on Climate Change, United States

Climate Change Requires Big Solutions. But Baby Steps Are the Only Way to Go.