KABUL—The coronavirus lockdown is offering an agonizing dilemma to Asadullah Haidery and his family, as it does to so many Afghans: get sick or go hungry.

For the past month, the 33-year-old laborer, who previously picked up odd construction or delivery jobs, battled with fears and uncertainties, juggling his options of staying home as advised by the government and venturing out for work opportunities. Most days, he ended up sitting by the roadside on the back of his wheelbarrow, hoping for work yet risking contracting the coronavirus.

“Staying home is an option I can’t afford,” he said, adding that he felt ashamed. “It was different before the pandemic. I had work most days and was able to provide for my family. This month, I’ve come home empty-handed every day.” Haidery, his pregnant wife, and five children are mainly surviving on beans and have turned to begging. 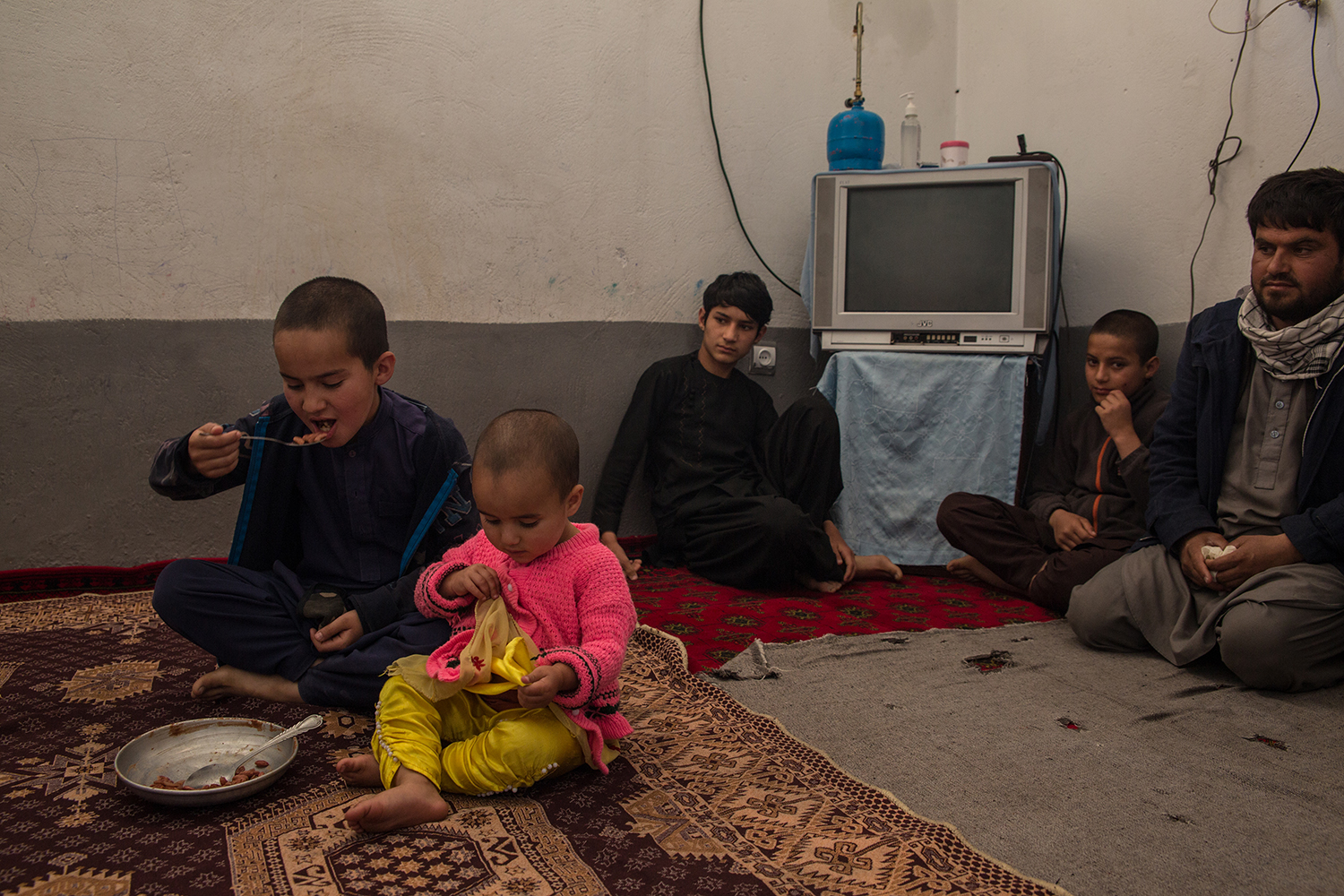 Asadullah Haidery (far right) and his children, seen in the room they rent on April 22, have recently had only beans to eat. The family lives in a basement room of a rented house in Kabul but can’t afford the 2,000 afghani ($26) rent anymore. Stefanie Glinski for Foreign Policy

With Afghanistan’s officially confirmed coronavirus cases at almost 2,000—though, lacking a large number of tests, actual numbers are estimated to be much higher—millions of poverty-stricken families face a similar dilemma to Haidery’s. More than half of the 37 million-strong population lives under the poverty line, with hundreds of thousands of daily laborers in the capital alone—including some 60,000 child workers—scrambling to survive.

“If we don’t take the coronavirus seriously, it will take us seriously.”

“If we don’t take the coronavirus seriously, it will take us seriously,” Public Health Minister Ferozuddin Feroz declared ahead of the city’s lockdown, which came into effect in late March. But even prior to the pandemic, the United Nations already projected that 14 million Afghans could face emergency levels of food insecurity throughout the winter months. Now, temporary border closures and interrupted food supply chains have seen prices soar.

For the past month, Kabul’s streets have been lined with beggars and daily laborers, desperate for an income to provide food for their families and at risk of getting sick or being fined for violating lockdown rules. 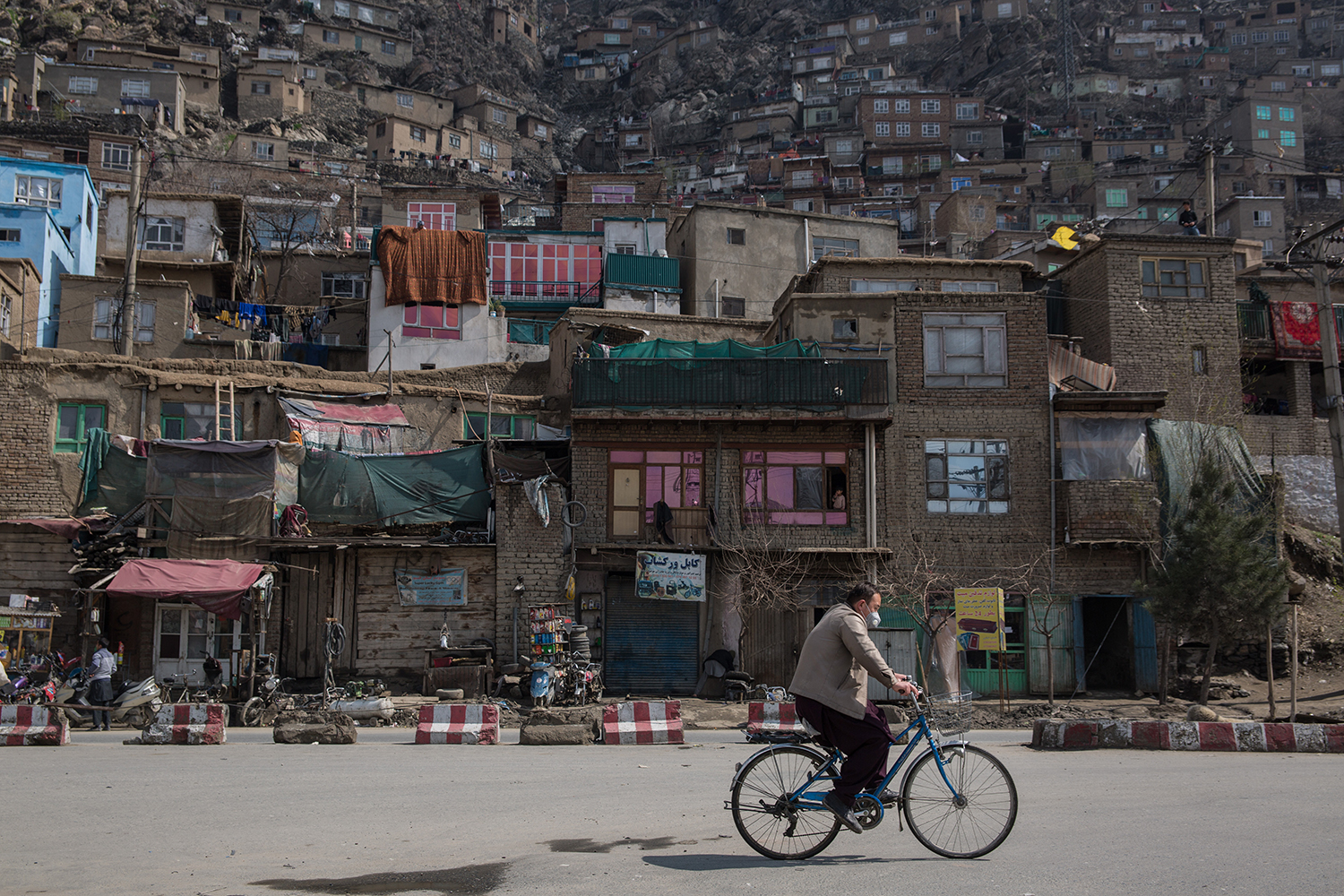 A man rides past mud brick houses in a West Kabul neighborhood on April 1. Stefanie Glinski for Foreign Policy

“It’s a scenario not seen since before the start of the U.S.-led invasion,” said Behzad Ghyasi, the operations manager at the Relief & Emergency Fund for Afghanistan, an aid initiative that organizes countrywide food distributions and is largely funded by the U.S.-based Afghan diaspora.

“People may not die of the coronavirus, but they will certainly die of hunger due to the lockdown.”

“People may not die of the coronavirus, but they will certainly die of hunger due to the lockdown,” he added, though emphasizing that government regulations were of course important to combat the further spread of the virus.

Haidery, who lives with his family in a small rented basement room in the center of Kabul, explained that he hasn’t been able to pay rent—a sum of 2,000 afghani ($26) per month that he previously earned easily with his usual daily income of 150 afghani ($2).

“The children ask for food, but for weeks, we haven’t been able to provide anything but beans for them,” said his wife, Suzan, who is seven months pregnant. “They cry, but having no money simply means having no food.” 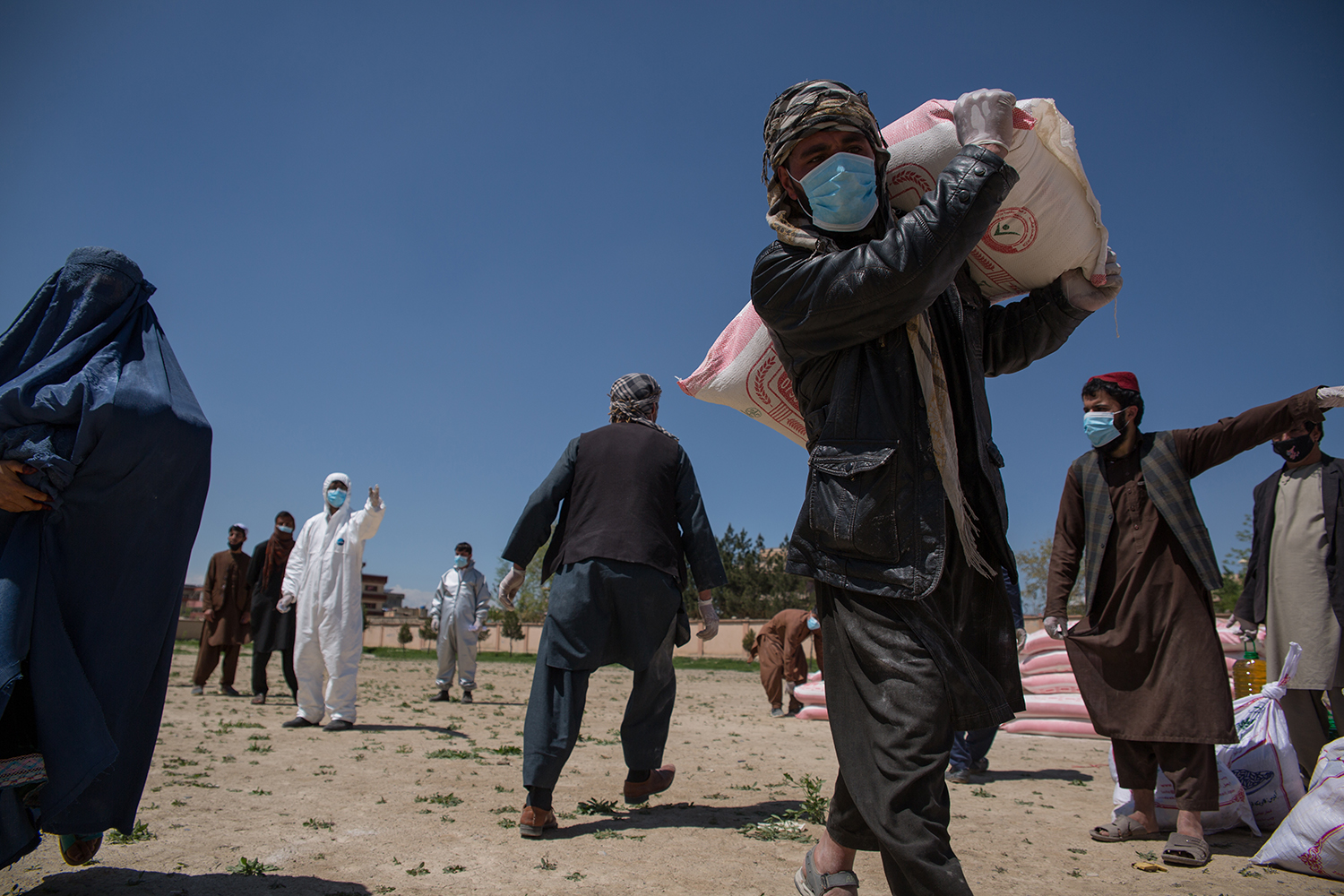 Food is distributed by the Relief & Emergency Fund for Afghanistan, an initiative that is mostly privately funded by the U.S.-based Afghan diaspora, in Kabul on April 23. Stefanie Glinski for Foreign Policy

Politically unstable and devastated by more than 40 years of conflict, Afghanistan is now in the middle of an even greater crisis, especially with the country’s underdeveloped health care system. In the first quarter of 2020, 533 civilians—including more than 150 children—were killed due to fighting, the United Nations said, and fears are growing over increased coronavirus cases.

The World Food Program, analyzing eight major markets throughout the country, found that the average price of cooking oil increased last month by 9 percent, while rice and pulses went up by up to 4 percent. A 50-kilogram bag of flour sells for 1,900 afghani ($25) in the capital right now, up from an initial 1,600 afghani ($21). The $4 difference is an amount that Haidery would previously earn in two days but now struggles to come up with entirely. 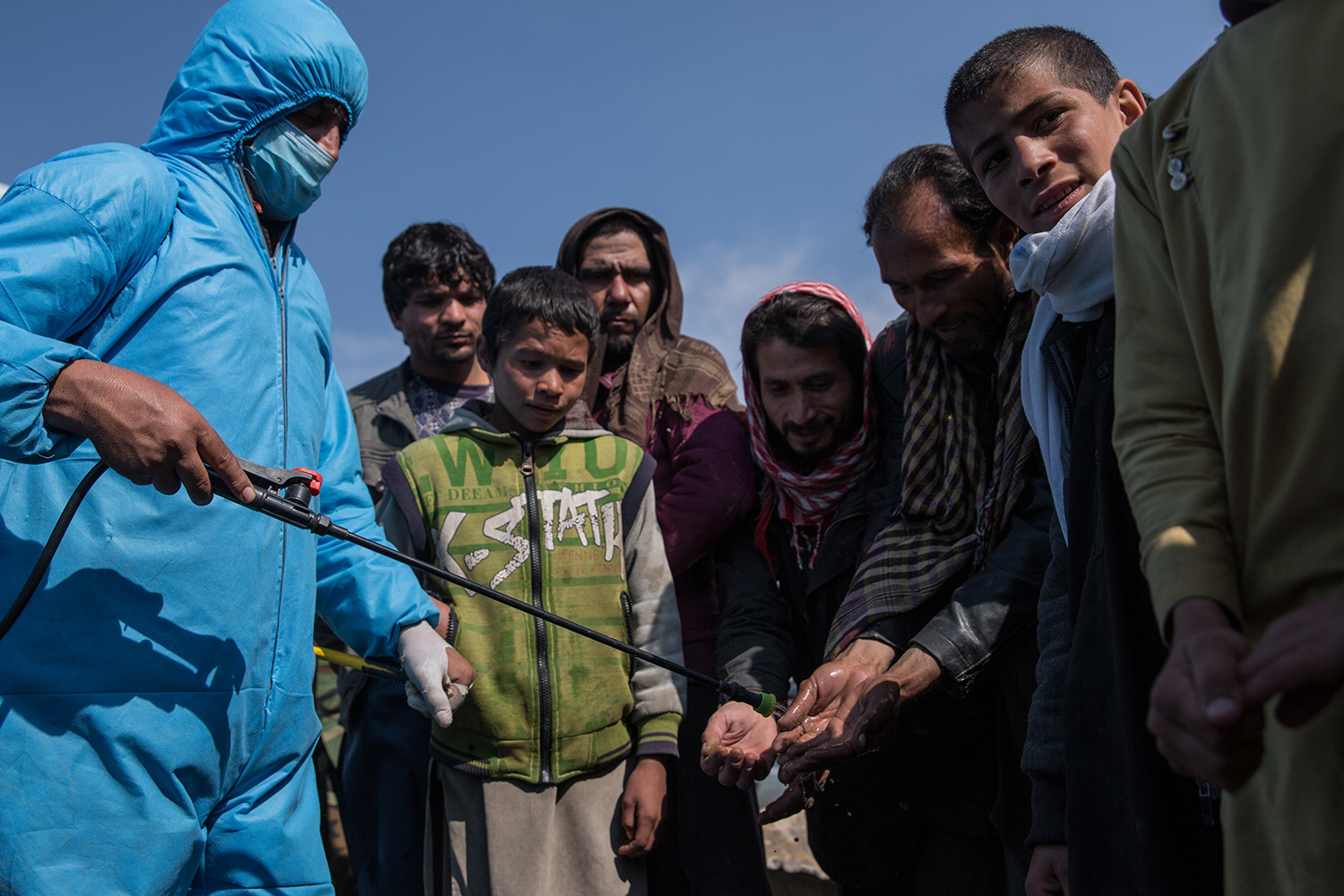 People arrive to have their hands sprayed with disinfectant solution in the Mandawi market area of Kabul on April 1. 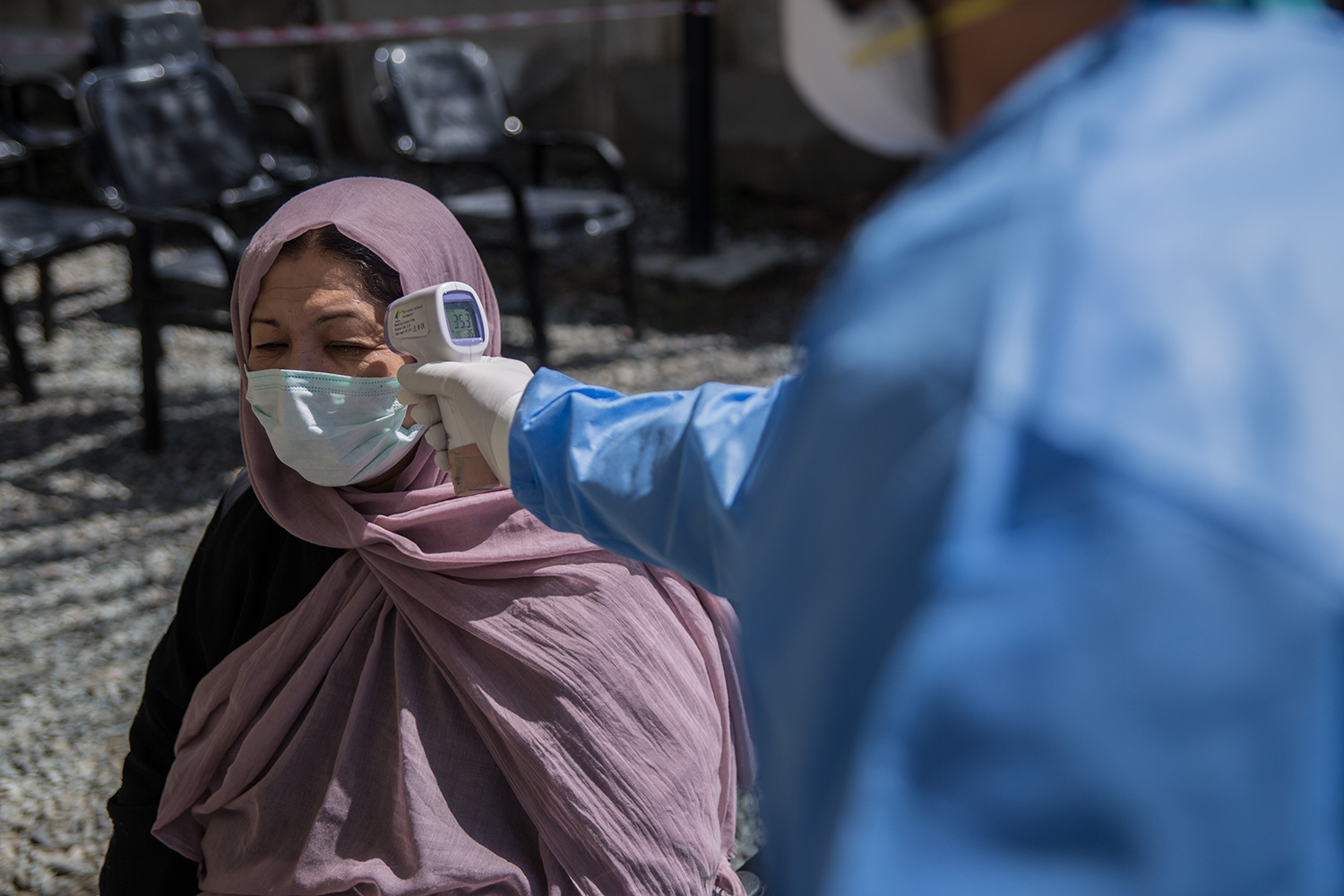 Faranaz Anwari, a 35-year-old widow with three children, used to work as a cleaner before Kabul was put under lockdown. She now begs on the street. “My job was my only hope to bring my family through,” she said, explaining that two of her children died of disease in the past year as she was unable to afford medicine.

“I don’t know what I’ll do if the lockdown continues. It doesn’t work for people like us. Of course I’m afraid of the coronavirus, but I’m more afraid of my family going hungry or me being unable to buy medicine for them.”

In contexts like Afghanistan, where many people live in close, crammed quarters, social distancing is nearly impossible, and workers in informal sectors cannot transition to working from home, according to a report by the International Rescue Committee. 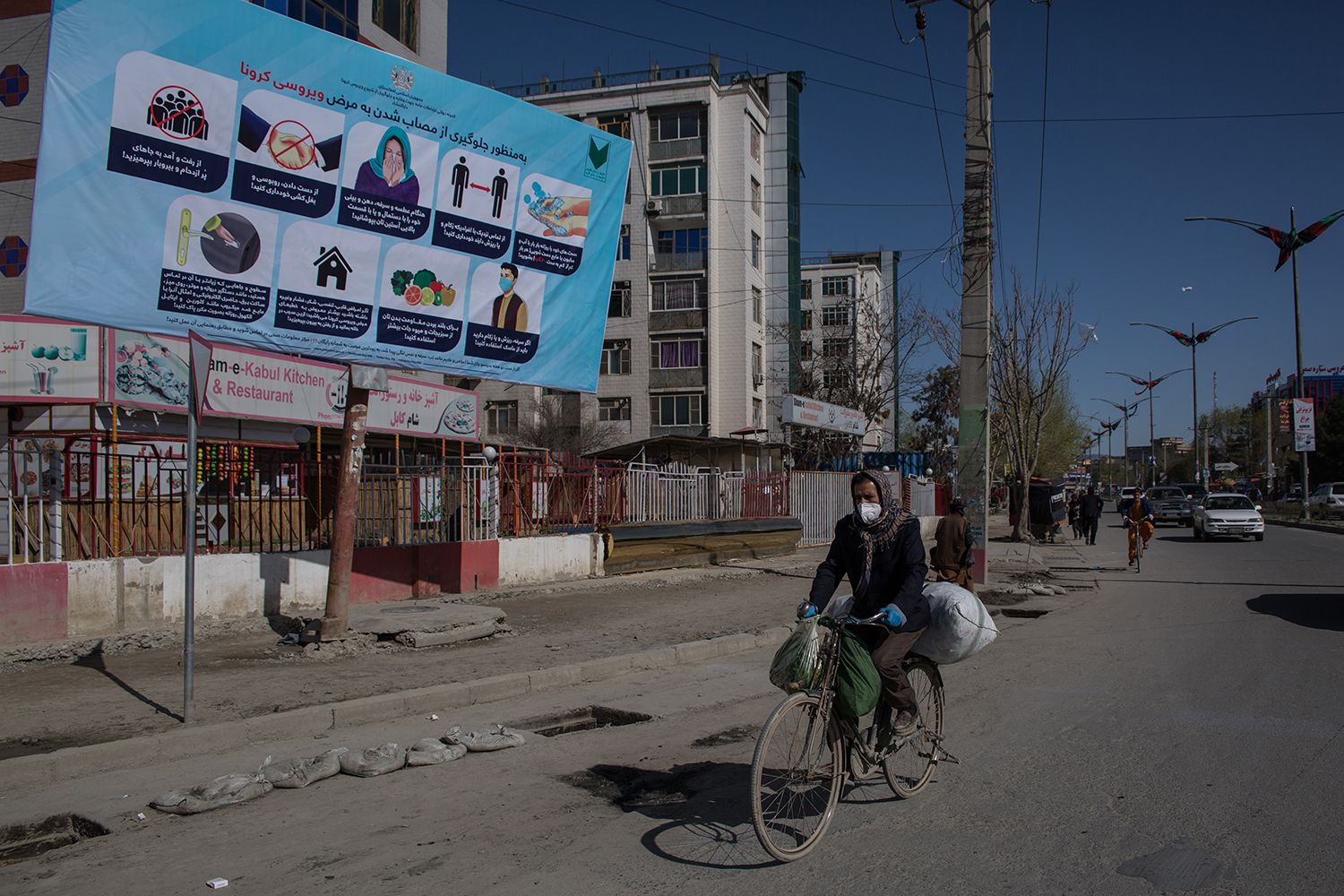 A sign warns of the symptoms of the coronavirus and explains measures that need to be taken to prevent an infection in central Kabul on April 2. Stefanie Glinski for Foreign Policy

“Governments are unable to provide sufficient relief packages or social safety nets. Sweeping mitigation measures like those undertaken in … the United States will not just be difficult to implement but could cause longer term and more widespread harm than the disease itself,” the report said.

While Afghanistan has a strong culture of charity and donating, and even people who have little will give what they can, millions are currently facing the daily choice between potential sickness and hunger.

“We have been suffering from war and sociopolitical crisis before COVID-19, but now the situation is getting worse,” Kabul’s governor, Yaqub Haidari, said, explaining that the government has started providing services—including food distributions—to around 200,000 residents.

But in a capital of 6 million people, many are already going hungry. 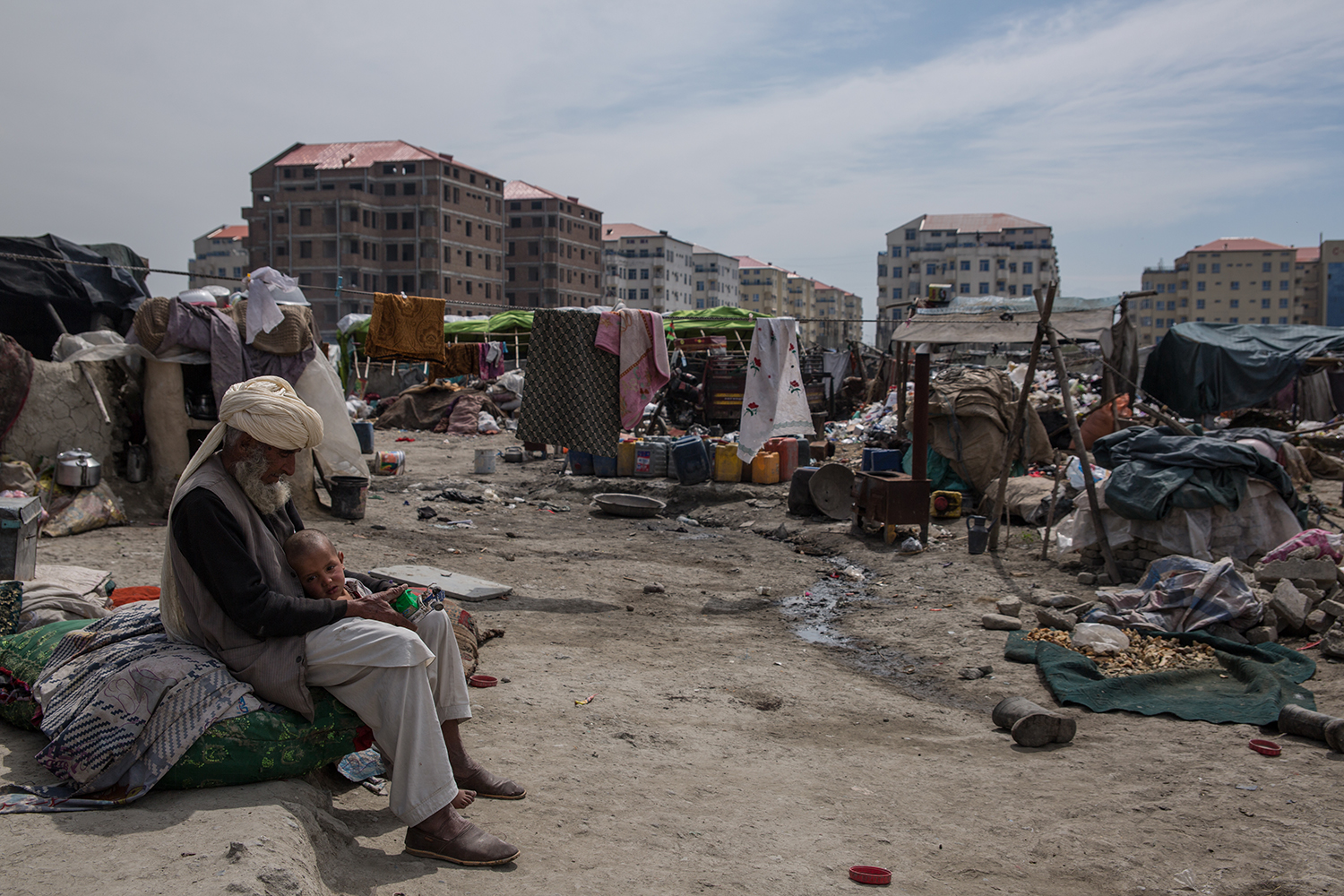 Mohammed Rosadin, 76, sits with his grandson Salim, 3, outside their home in Kabul on April 22. Stefanie Glinski for Foreign Policy

Mohammed Rosadin, 76, sits with his 3-year-old grandson outside their home, a cluster of old tents held together by old blankets, ropes, and pieces of wood. In the background, the modern, air-conditioned apartment blocks of one of Kabul’s new up-and-coming neighborhoods are rising. In Rosadin’s backyard, the smell of trash is rising.

His family has long collected garbage throughout the city, sorting through whatever was useful enough to sell, recycling the rest. It was easy to sell old plastic or metal scraps, he said, but with the lockdown, most of his clients had vanished into their homes.

“We’re supposed to do the same—to stay home,” said Rosadin, laughing sarcastically. “Of course we’re afraid, of course we’d like to stay home if we had the support to do so, but we would go hungry. We might die before the virus even reaches us. If the situation continues like this for another six months, we will be digging our own graves.”