A Motorcycle-Riding Leftist Feminist Is Coming for Erdogan

But in Turkey she hasn’t gone unnoticed by her supporters or critics. Kaftancioglu is widely recognized at home as a key factor in her party’s success battling President Recep Tayyip Erdogan. She is both a public iconoclast and a tireless behind-the-scenes worker—and at 48 years old, a symbol of generational change in a party traditionally dominated by older men. Her style of politics is an implicit rejection of the nationalist faction of her own party, which is fiercely devoted to the founder of the republic, Mustafa Kemal Ataturk, but associated by many with hostility to both minorities and outwardly pious Muslims. Kaftancioglu makes no apologies about opposing a mentality once dominating the party’s decision-making but now widely perceived as out of touch.

That boldness of thinking, which she later channeled into a conciliatory new electoral strategy, has fueled the CHP’s continued rise. It has also made her the target of Erdogan’s ire. 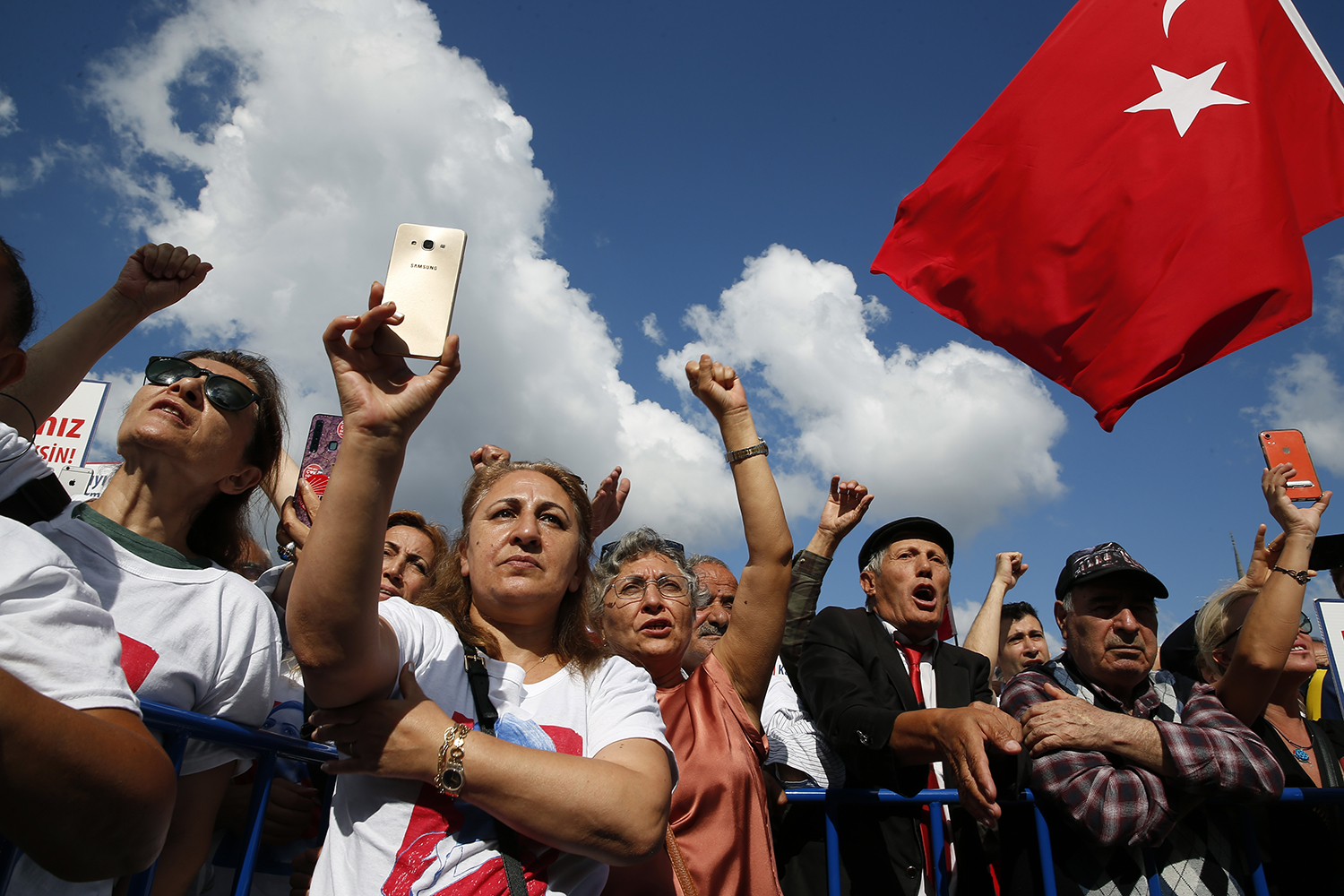 Supporters of Kaftancioglu chant slogans during a rally outside a court in Istanbul where she was standing trial on July 18, 2019. Lefteris Pitarakis/AP

Kaftancioglu grew up in the 1970s and 1980s in the countryside of Turkey’s Ordu province along the Black Sea, the daughter of a housewife and teacher of modest means. “I am one of the hundreds of thousands of citizens of Turkey born in a village, growing up in poverty, but becoming who I am thanks to the equal opportunities provided by the republic,” she wrote in response to written questions from Foreign Policy.

Kaftancioglu went on to medical school in Istanbul, specializing in forensic medicine. But she also became involved in politics during her studies, defending the rights of veiled women who were forbidden to enter some universities, and writing her thesis on torture cases, widespread in Turkey at the time. Later, she would dedicate herself to activism, first with the Human Rights Foundation of Turkey and later co-founding the Collective Memory Platform with families of victims of unsolved political killings. Her father-in-law Umit Kaftancioglu, a writer and columnist for the secularist daily Cumhuriyet, was killed in 1980 by suspected ultranationalists.

“She’s as much an activist as a politician. Her work in civic activism has been so important and ground-breaking,” said Aykan Erdemir, the director of the Turkey program at the Foundation for Defense of Democracies in Washington, and a former CHP member of parliament. “She’s almost like the exact opposite of the stereotypical CHP associated with the old era.”

Kaftancioglu started working for the CHP in Istanbul as head of press, culture, and communications in 2011, then went on to become deputy chairperson for Istanbul in 2012 before being elected to her current position as the party’s Istanbul chair in 2018.

Kaftancioglu’s grassroots experience has always informed her activism in the CHP.

“Canan Kaftancioglu represents the other, more genuinely democratic approach where you actually have to go out and persuade people that you have the right ideas.”

Since becoming Istanbul district head 2018, she’s poured energy into teaming up with other opposition parties, mobilizing young professionals, and developing a new approach—grassroots in organization, conciliatory in tone—to win over segments of the population that had previously often been ignored by the party.

“The CHP’s previous approach, and there are still a number of people who feel this way, is that they have the right ideas and if the people don’t understand them, it’s the people who are at fault,” said Ilter Turan, a political science professor at Istanbul’s Bilgi University. “I think Canan Kaftancioglu represents the other, more genuinely democratic approach where you actually have to go out and persuade people that you have the right ideas.”

Under Kaftancioglu’s guidance, Imamoglu and other mayors took a new tack, dubbed the “Radical Love” strategy, which is the antithesis of Erdogan’s ferocious style of polarization and antagonism. This involved making overtures to marginalized groups, using positive, inclusive language (extremely rare in the vicious world of Turkish politics), and trying to heal the cultural fault lines that Erdogan has taken a jackhammer to. Imamoglu’s positive slogan was “Everything’s going to be OK,” and he recited a prayer at a mosque—a rare move for a CHP politician—as a form of outreach to pious Muslims.

The party reached out to government supporters frustrated with Turkey’s economic woes, minorities wary of the CHP’s nationalist wing, and religious conservatives who often see the secularist CHP as Islamophobic. “They were nonconfrontational and nonpolarizing. They actually tried to reach out to [demographics] that CHP regulars would consider to be outside their constituencies,” Turan said.

Sisi and Erdogan Are Accomplices of the Coronavirus

By killing the Middle East’s sense of community, the region’s dictators have helped the pandemic on its death march.

Furthermore, in stark contrast to the party’s major communications and technical blunders during the presidential elections in 2018, under the watchful eye of Kaftancioglu and others the party’s Election Day strategy for last year’s municipal elections—which included a controversial rerun after the CHP was shown to have narrowly won in the first round—was tightly run. Imamoglu was constantly on TV communicating clearly, and with fears of voter fraud running high, the party held a vigil to protect the counting of the ballots. “This is the first time I’ve seen the CHP this organized,” said Nevsin Mengu, a columnist from a CHP background. “Kaftancioglu has played an important role in this.”

Kaftancioglu remains a popular but contentious figure. She has expressed opinions that are extremely controversial within the party and indeed the country, acknowledging the Armenian genocide, calling the state a “serial killer,” and criticizing a popular Kemalist slogan for its militant language, tweeting “I refuse to say we are the soldiers of Mustafa Kemal, but we are his comrades.”

These opinions have made her the perfect boogeyman for the religious-conservative, nationalist AKP. Within 48 hours of Kaftancioglu being elected the party head for Istanbul in 2018, a prosecutor opened a terrorism investigation into her (she’s now appealing a 10-year jail sentence) and Erdogan himself devoted 10 minutes to slamming her during an AKP meeting the next day, reading each of her tweets that he took issue with. 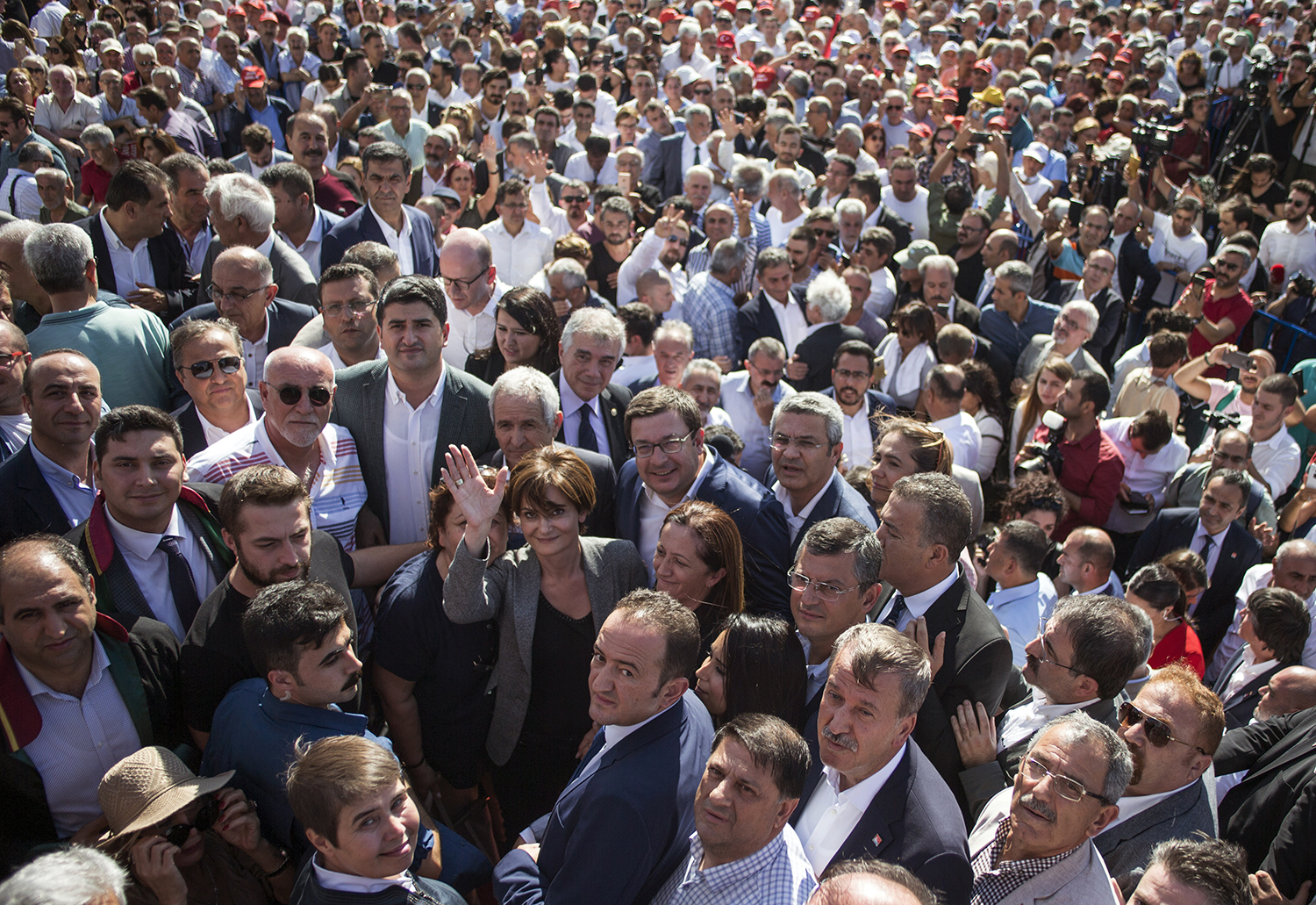 Kaftancioglu gestures from amid the crowd after her trial in Istanbul on Sept. 6, 2019. AP

More recently, a criminal complaint and investigation were opened against Kaftancioglu after the CHP Istanbul municipality lodged a complaint against Erdogan’s powerful Communications Director Fahrettin Altun for allegedly building illegal constructions in Istanbul.

This is part of the government’s wider antagonistic strategy of treating any and all opposition as an existential threat. After CHP municipalities started a donations campaign to help those affected by the ongoing coronavirus pandemic, the central government blocked the funds, accusing the party of trying to form a parallel state.

“The government, in accordance with its usual political mentality, is managing the crisis without transparency, cooperation, or common sense,” Kaftancioglu said.

Being a woman makes her even more of a target for her detractors. “I’ve been subjected to hundreds of sexist, nationalist, ultrareligious groups’ threats, and it still goes on. I knew that as a woman I was going to face this, but I never thought of taking a step back,” Kaftancioglu wrote in her email.

She said the government’s strategy is to polarize society along cultural and political fault lines and find enemies everywhere: “If [the government] can’t identify an enemy outsider, they create abstract enemies and pretend to be in a fight with them. Sometimes they call it foreign powers, sometimes terrorism, sometimes secular people.”

Erdogan needs “credible enemies” to unite his party and supporters against through his polarizing tirades.

Selim Koru, an analyst at the Economic Policy Research Foundation of Turkey, an Ankara-based think tank, said that Erdogan needs “credible enemies” to unite his party and supporters against through his polarizing tirades. In many ways Kaftancioglu fulfills the role perfectly, not just for her political opinions, but also for her lifestyle, exemplified when she once retweeted her husband’s photo showing he was eating pork, a major red line in Turkey even among most secular people.

“What really makes her a juicy target is her flagrant absence of the ‘yerli ve milli’ [local and national, a favorite phrase of the government], the national spirit. She and the people around her … don’t just exist outside of the national spirit type of thing, they deny that kind of nationalism,” Koru said. “Erdogan can get up and say, ‘Look, this is being disrespectful on purpose. She hates you, she hates what you are, and she wants to change you in the way that Kemalists wanted to change you, in the worst possible way.’”

Kaftancioglu’s opinions have also made her a controversial figure within her own party, particularly among the older generations. “They hate her. They totally hate her,” Mengu said. “They see her as an evil woman who came here to divide the CHP. For them this change is terrible. [They think,] ‘The CHP is falling apart.’ It’s not. It’s changing.”

But, as Turan, the political scientist, points out, just as Kaftancioglu’s approach turns many people off, it also caters to others who previously may have felt excluded, such as younger people, leftists, liberals, and religious and ethnic minorities. “A certain segment of the party … didn’t like her iconoclastic approach to politics,” he said. “But it may also be that some other people who previously [felt] alienated from the party are now more interested for the same reason.” 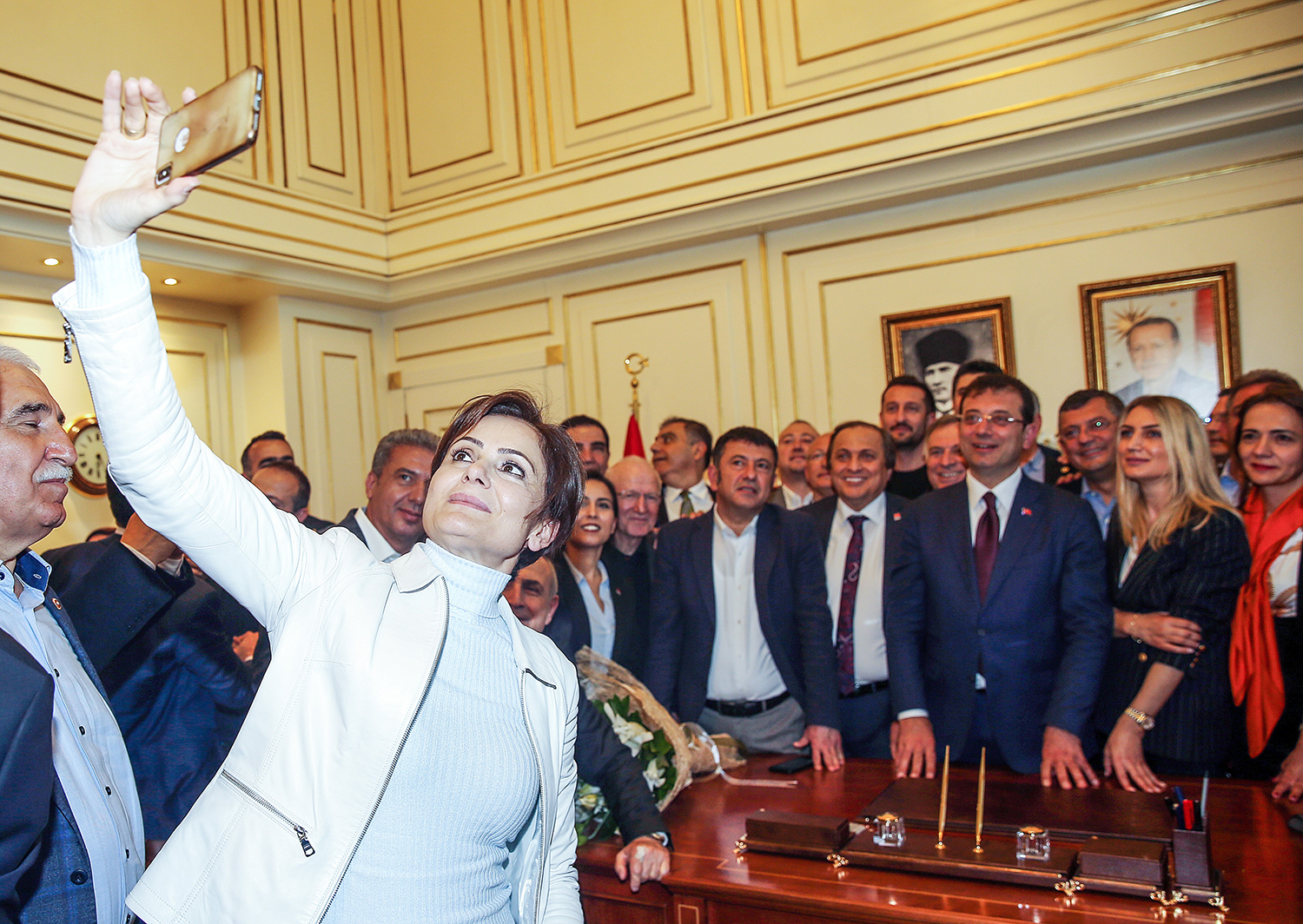 Women in particular seem to feel inspired seeing a female politician achieve such success. Mengu attended the CHP congress when Kaftancioglu was reelected. “There was excitement. At least half the room was full of women,” she said, one of whom told her, “Every time she wins I feel like I won.”

The slogan of the congress was “from Istanbul to Turkey, the only path forward is by coming to power,” hinting at the CHP’s increasingly national ambitions. The party hasn’t won an election since 1977, but its most popular figure, Imamoglu, polls almost as high as Erdogan. It’s far too early for the party to announce a presidential candidate, but two of the main contenders would likely be Imamoglu or Mansur Yavas, the popular mayor of the capital, Ankara. Kaftancioglu will likely continue her behind-the-scenes role.

It’s anyone’s guess as to whether or not Erdogan would give up power even if he lost the next presidential elections, scheduled for 2023.

Elections in Turkey are fought under incredibly unfair conditions favoring the ruling party. Some governance experts no longer consider the country a democracy, but rather a competitive authoritarian system, especially after Erdogan was left with few limits on his power when the government was transformed into an “executive presidential” system following a referendum in 2017, which Kaftancioglu describes as “one-party rule transformed into one-man rule.”

It’s anyone’s guess as to whether or not Erdogan would give up power even if he lost the next presidential elections, scheduled for 2023. “The question is, would the incumbent be willing to let go of this important position? And the answer is, of course he would be exceptionally reluctant to do so and will do everything in his power to subvert the electoral process to stay in power,” Turan said, stressing this may not be the case if the challenger wins by a wide enough margin.

In any case, Mengu said there are once again high hopes in previously forlorn opposition circles: “For the first time in a long time people are talking about the CHP like it can realistically win national elections.”