What’s different this time, villagers say, is many of the fighters’ own sisters and daughters are attending.

BADIKHEL, Afghanistan—For the last year, Habib-ur-Rahman has been running a small girls school in his own home in this remote area of rural Afghanistan, which is largely dominated by the Taliban. In a previous era, when the Taliban completely ruled the country before 9/11, that would have been impossible: The radical Islamist group forbade formal education for girls. But things are different this time, villagers say.

Some of the girls at Rahman’s school are actually related to active Taliban members, and according to the villagers, the insurgents have assured them that they have no qualms with his girls school. “Some of my students are daughters, sisters, or nieces of Taliban fighters. Mostly, all of these men are not living in our village,” Rahman told Foreign Policy. “They are busy with fighting and hiding. But they encouraged their relatives to visit my school and get educated.”

“My brother is a Taliban fighter. But he does not have any problems with the school. He wants me to seek wisdom and education,” said Latifa Khostai, one of Rahman’s students.

Even as the fighting rages outside the village between the Taliban and Afghan national forces, despite a U.S.-orchestrated cease-fire, Rahman said he is cautiously hopeful that things won’t go back to the way they were before. “I’m proud of my work, and I know that it’s dismantling a lot of prejudices,” said the teacher, who was himself educated in the capital of Kabul. “Education is an important part of the Islamic religion. The Taliban know that too, but it seems that they don’t have a clear stance on girls’ education.”

When the Taliban came to power in the 1990s, they imposed a very extremist patriarchal rule and banned female education all over the country. Additionally, women were not allowed to work and could not leave their homes without a close male relative. But in fact, misogynist policies were already shaped before the Taliban were created. After the mujahideen overran Kabul and toppled the last communist government in 1992, hostility toward women in urban areas increased. Also, the whole issue has always been exploited by both local governments and foreign powers that invaded the country. 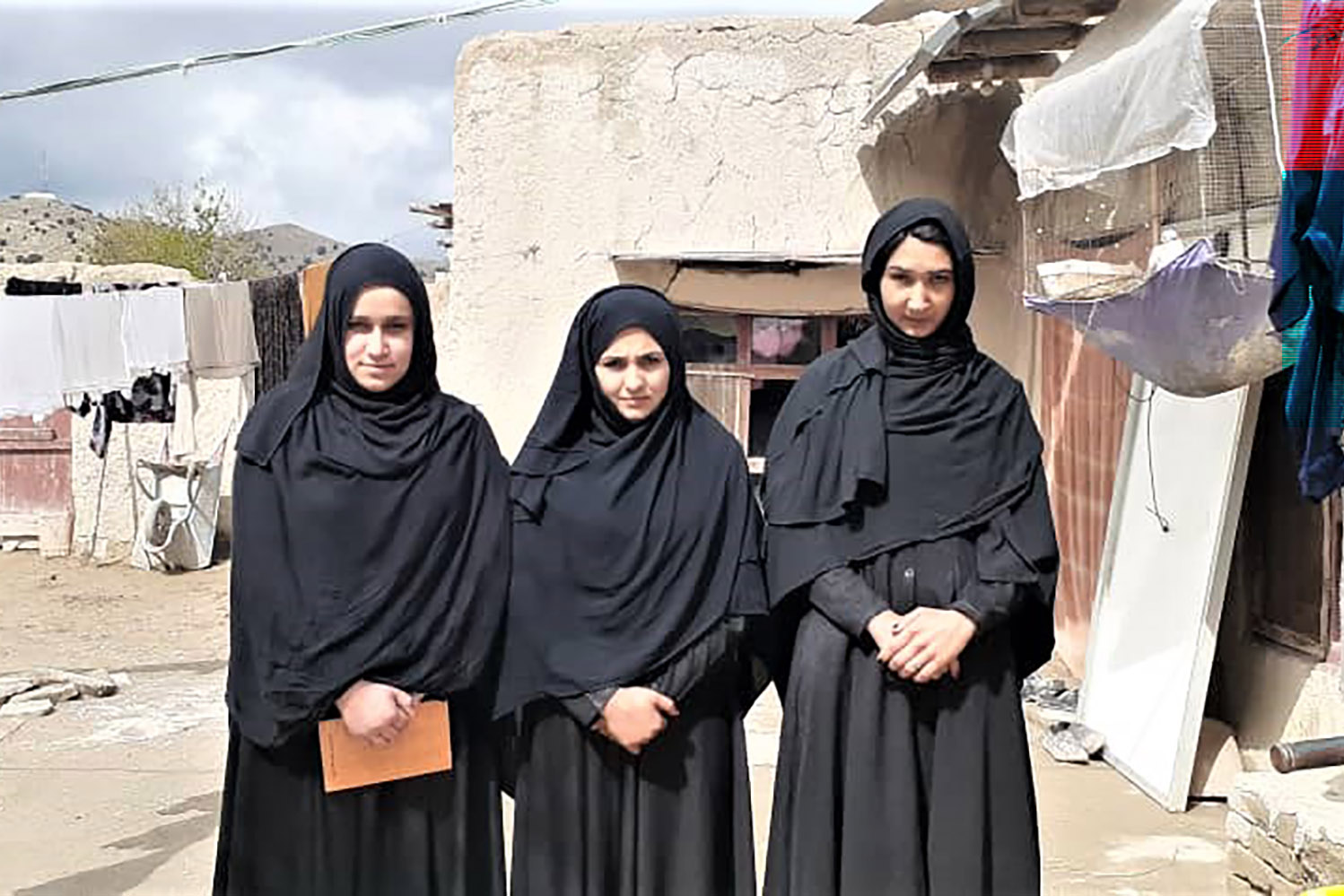 Some of Rahman’s students on April 1. Several are related to Taliban members. “My brother is a Taliban fighter. … He encouraged me to visit school,” Latifa Khostai (right) said. Abdul Rahman Lakanwal for Foreign Policy

When the Afghan communists staged a brutal coup in the late 1970s, they portrayed themselves as the liberators of Afghan women and underlined the importance of education. Often, this happened through propaganda movies focusing on the alleged transition of Afghan society after the so-called revolution, as the communists viewed their coup, in 1978. In such movies, the liberation of women had a very clear depiction: miniskirts and alcohol. But at the same time, many schools were shut down—the total number of them actually decreased throughout the country—while many female dissidents were tortured and killed in hidden dungeons. When the Russians invaded Afghanistan, they introduced themselves as defenders of women’s rights against so-called barbaric Islamists, while many Afghan women supported the mujahideen rebels. In 2001, a déjà vu took place when the Americans and their Western allies entered Afghanistan and proclaimed women’s rights, and especially girls’ education, as one of their chief purposes.

Since the Americans signed a peace deal with the Taliban in late February, it has become clear that, sooner or later, the insurgent group would somehow return to power in some form, at the very least in some sort of power-sharing arrangement with the government in Kabul. In fact, large parts of Afghanistan are already under the Taliban’s control. But especially in urban areas like Kabul and elsewhere, many Afghans still fear a regression toward the dark days of the Taliban regime. Especially when it comes to female education, some observers and activists believe that the Taliban would ban any kind of education for girls and young women again. Both the Kabul government and the American negotiators made clear that such a regression would not take place, while the Taliban leadership preferred to stay vague and underlined the importance of Islamic norms in the context of women’s work and girls’ education. “We are not against female education or work. But we have Islamic norms. This is still not the West,” Sher Mohammad Abbas Stanikzai, the head of the Taliban office in Qatar, previously said in an interview.

The case of the girls school in Badikhel, however, shows that things are much more complex. “This is not surprising. The Taliban were never able to have a clear position to even convince their own men about the validity of un-Islamic orders like closing girls schools,” said Orzala Nemat, a political ethnographer and head of the Afghanistan Research and Evaluation Unit, an independent research organization based in Kabul. She described how even during Taliban ruling in the late 1990s, local officers made arrangements with local communities to keep the schools open. “This whole rule is one among a number of rules perhaps imposed on Taliban leadership by those who aimed to destroy the foundations of a progressive thinking in the country.”

The villagers in Badikhel have witnessed the Taliban’s discordant stance firsthand. While some Taliban members sent their female relatives to Rahman’s school, which now has about 30 students, others sent threats. According to Akhtar Zaman, a local villager, unknown militants demanded the closure of the school. If not, Rahman would face “consequences.” Subsequently, the villagers reached out to the family members of the students. “After we talked with the Taliban members we knew, they became angry. They said they would find out who threatened the school, and they took it personally since their own girls are visiting the school,” Zaman said.

Rahman also faced other kinds of local resistance. Often, families rejected giving the girls into the custody of a man unrelated to them. Additionally, many still did not like the idea of sending their female relatives to any kind of school. But, after some time and many efforts, Rahman managed to persuade most of his fellow villagers to allow him to continue the effort. 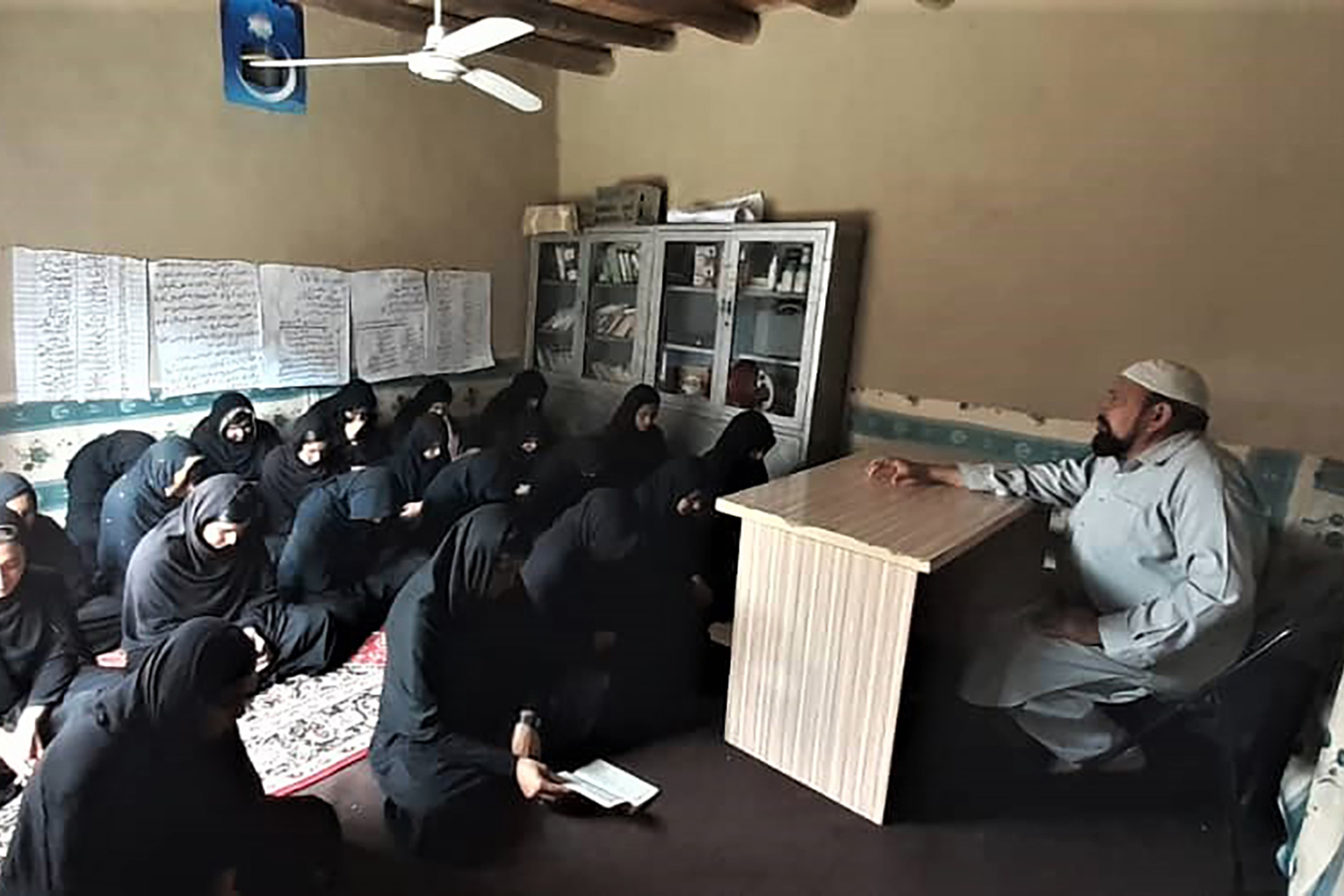 “Striving for education has always been a problem for Afghan women. But I’m optimistic that certain circumstances are changing slowly. Personally, I’m happy to go to school and learn so many different things,” said Mahbuba, one of the schoolgirls, who declined to give her surname. She described how some of her family members at first resisted her attending Rahman’s school. But over time, all of them started supporting her and even encouraged their relatives to send their daughters and sisters and nieces to school too. Also, Mahbuba wants to go to university one day. “We are a crucial part of Afghan society, but we need to be educated to serve our purposes in the best way,” she told Foreign Policy.

Another student, Maryam, who also did not give her surname, said her older brother encouraged her to go to Rahman’s school. “I hope that the situation improves and that we would be able to continue visiting school. The worst thing would be a closure,” she said.

Nor is the lack of education in Afghanistan’s rural areas solely tied to problems with the Taliban. “I wonder if the government even knows that I’m running a school in my own house in a village,” Rahman said while underlining his limited resources. He used his own savings and local donations to build up the school. “Mostly, people talk about schools and universities in Kabul. But what about the villages? It’s as if we don’t exist,” he said.

From 2002, the U.S. government reportedly invested around $1 billion to build schools, staff classrooms, and flood provinces with textbooks. But most of the money went into the gaping pockets of warlords and corrupt government officials, leaving entire schools empty and decaying. By 2015, at least 1,100 schools listed as active in 2011 by the Afghan Education Ministry were not at all operational. Later, these places became famous as “ghost schools.” Also, girls were often overcounted by officials to accumulate more U.S. aid money. The failure of the United States in Afghanistan was probably best, and most disturbingly, epitomized by the very existence of what are now known as ghost schools, where no female students actually exist.

Rahman knows he’ll be very much on his own in the future, especially after the Americans leave. “Our school is very real. But I doubt that those people in Western capitals or in the Kabul bubble will care about us.”

Abdul Rahman Lakanwal is a journalist based in Afghanistan,

On Election Eve, Economists Struggle to Figure Out a World That’s Unraveled