Coronavirus Disproportionately Affects Health Workers. Here Are the Countries Most at Risk. 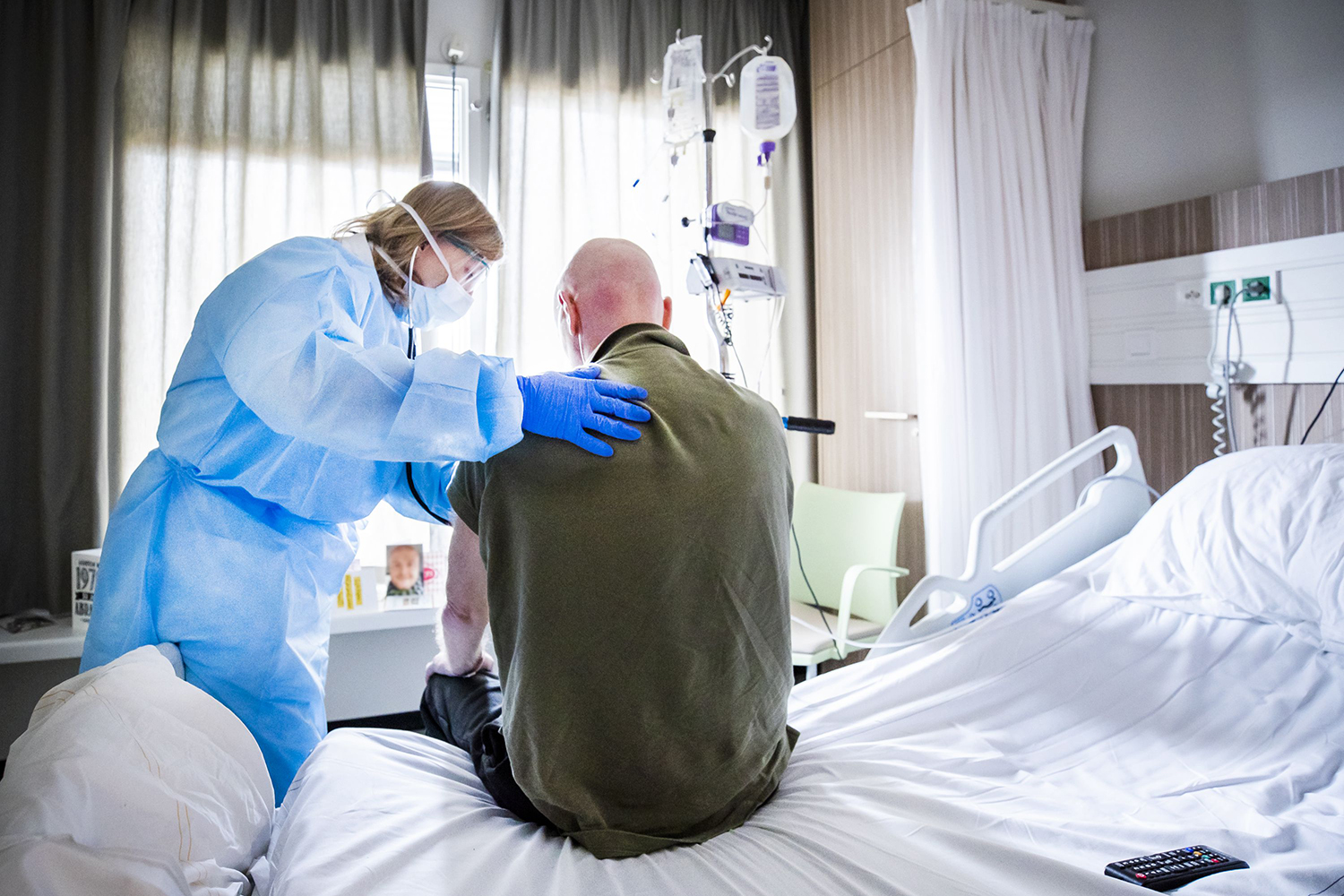 An attending physician listens to the breathing of a patient who is recovering from COVID-19 at HMC Westeinde Hospital in The Hague, Netherlands, on April 4. REMKO DE WAAL/ANP/AFP via Getty Images

As coronavirus cases pass 3 million worldwide, it’s clear that the pandemic has disproportionately affected health workers. A shortage of gloves, masks, and other personal protective equipment has meant that those caring for the very ill are increasingly becoming ill themselves. In the United States, the Centers for Disease Control and Prevention estimates that around 19 percent of confirmed coronavirus cases have been health workers. In the United Kingdom, one-third of National Health Service staff and key workers tested for the coronavirus have been confirmed positive. There is a danger that as more health workers fall ill—and in some cases die—from COVID-19, already stretched health care systems could suffer a shortage of trained medical personnel. Looking at the top 20 countries with the most coronavirus cases (as of 10 a.m. May 4), that danger is more acute in some nations than others.

When it comes to nursing personnel, the picture is especially grim for Spain and Italy—the countries with the second- and third-highest coronavirus death tolls, respectively. The two countries have a relatively low number of nurses compared to other European Union countries, suggesting these front-line staff are particularly vulnerable to any reduction in workforce.

As COVID-19 seems to do the most damage with older populations, the relative age of the medical workforce gains importance when defining how resilient each country will ultimately be. Nine countries in the top 20 have a physician workforce where more than 30 percent are over the age of 55, including the five of the top six worst-hit countries. The numbers are especially worrying for Italy, the only country in the set where a majority of physicians are over 55. China doesn’t report figures for the age of its physicians, although female physicians must retire at 55 and male physicians at 60.

Italy does not keep figures for its nursing population, so it’s not possible to see whether that trend carries over. Of the countries that do keep figures and have been especially hit by the coronavirus, the United States has the oldest nursing population and is the only country to have more than 30 percent of their nurses over the age of 55. The American Association of Colleges of Nursing projects a nursing shortage in the United States not just because a significant portion of its workforce is aging out, but because the overall aging of the population will drive the need for more geriatric care. This problem isn’t unique to the United States: The World Health Organization (WHO) has declared a global nursing shortage, especially for African and Southeast Asian countries.

Hospitals worldwide have been stretched by the pandemic. In the United States, public parks, convention centers, and Navy hospital ships have been recruited to build extra capacity. Looking at the number of beds available before the epidemic hit, the need to rapidly expand the number of hospital beds comes into focus. The United States has relatively few, with 2.9 beds per 1,000 residents. Germany, which has had a relatively low death rate during the pandemic, also had the highest number of hospital beds available.

Countries have deployed a variety of ways to increase their health care capacity. In the United Kingdom, more than half a million people have volunteered to assist the National Health Service, and 11,000 former medical staff have returned to service. In countries such as Italy, thousands of medical students have been fast–tracked into practice. In March, New York Governor Andrew Cuomo appealed for medical workers to come out of retirement or the private sector to help with the state’s coronavirus battle, and 40,000 people signed up.

As more health workers get infected, countries have turned to an underexplored phenomenon: immunity. In northern Italy, tests have begun on approximately 3,000 health workers to see whether they have the requisite antibodies that would suggest a resistance to the coronavirus. The aim of the tests is to ultimately develop a license for workers to prove they are safe to return to work. “Some say [the tests] will work, others say they won’t,” Luca Zaia, the governor of the region involved in testing, said. “It all has to be proven but that’s how vaccines are made as well.”

However, the WHO has warned against such quick fixes, pointing out that even if a test shows coronavirus antibodies, the levels may be too low to prevent reinfection. “At this point in the pandemic, there is not enough evidence about the effectiveness of antibody-mediated immunity to guarantee the accuracy of an ‘immunity passport’ or ‘risk-free certificate,’” the WHO wrote in an April 24 scientific brief.

As countries continue their struggle against the coronavirus pandemic, it’s only natural that they will pursue unproven methods if they think it will make a difference. The most effective protective measure remains the simplest: making sure health professionals have the right equipment to do their jobs in the first place.