4 Reads on a Frighteningly Plausible Vision of the Future

“Burn-In” fascinated and scared me as a cop, spy, writer, and citizen.

I’ve never written a book review before, but then again I’ve never had such an enjoyable discomfort in reading a book before. Four versions of me read Burn-In: A Novel of the Real Robotic Revolution, the newest novel by P.W. Singer and August Cole, and all four of my personas—cop, spy, writer, and citizen—felt the same after finishing it: thrilled and then worried. Because Burn-In is fiction, but for how long?

Burn-In is set in an unspecified future; it plausibly could take place five years from now or 50 years. The lack of a specified date is deliberate, and it is one of the more effective and unsettling aspects of the book. The changes on view are already happening; logical and uncomfortable extensions of choices consumers and governments make every day. From the first page, the reader is dropped into an environment in which technology, politics, and society feel somewhat strange but certainly not foreign, out on the far edge of familiar. Everything Singer and Cole write about already exists in some fashion, though not yet to scale. A sign of the blurring between fact and fantasy is that Burn-In is a piece of fiction with detailed footnotes and sourcing. 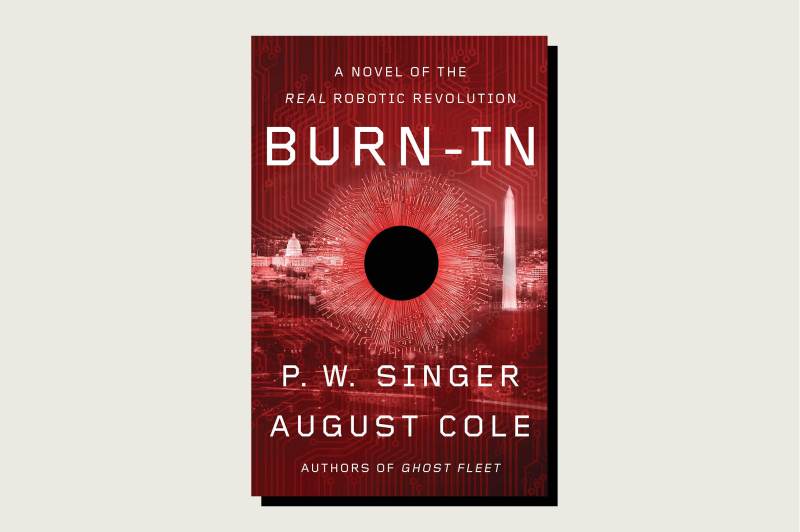 The novel revolves around FBI agent Lara Keegan as she investigates a cascade of seemingly unrelated crimes and incidents. Keegan is tasked to try out a robot partner, TAMS (Tactical Autonomous Mobility System), as proof of concept (or disproof of concept). The economy is even more unequal than it is today. There is a modern-day version of the 1930s Bonus Army, with armed and disgruntled military veterans camped out in semi-autonomous swaths across the Washington, D.C., area. Keegan, a veteran herself, must navigate the different landscapes—from poverty to affluence—as well as the politics of drones and automation in law enforcement and in society at large.

I’m a local cop in my hometown of Savannah, Georgia, so I read Burn-In with some serious high-tech envy and a real sense of sadness at the continued death of the traditional beat cop. Local police departments tend to make do with decades-old technology: Think of the infamously long procurement process of the federal government but with no money. Local law enforcement databases are siloed by jurisdiction and by bad design. Most are also cumbersome and unforgiving when it comes to spelling of names and dates of birth, nothing as forgiving and almost anticipatory as Google.

Burn-In doesn’t focus on local police—the FBI takes center stage in the book—but it does show local D.C. police with capabilities beyond what I experience day to day. I don’t focus on weapons in my job; I focus on people and connections. Burn-In does as well, but it does so through link analysis and pattern recognition powered by an artificial intelligence (AI) that blurs the line between human and computer in terms of learning and leaps of logic and even faith.The world in Burn-In is, like our one, one of endless collection and verification.

As a beat cop, I have tried to maximize the number of times that my neighbors—by which I mean the whole of the community I serve—feel neither scrutinized nor suspected by police. I do that by asking myself this simple question: If I didn’t have a badge and a gun, how would I handle this call? My neighbors get the benefit of doubt every time. Very few are criminals, and I act accordingly. I have actually become less jaded about people the more I work with my neighbors as a police officer. I also don’t trace every single person every single time I encounter them.

Yet the world in Burn-In is, like our one, one of endless collection and verification. Everyone is checked by cameras and in databases automatically; there is no probable cause or even reasonable suspicion requirements for reading or storing the license plates of every car on public roadways or the facial recognition systems of ubiquitous security cameras in public places. This collection is endless, and, increasingly, it is total.

I wear a camera on my body that records my interactions with my neighbors, and I love these cameras as I have nothing to hide. It protects me from baseless allegations and protects my neighbors from disrespect or worse from police. The relentless collection portrayed in Burn-In is more seamless and widespread than my current reality but probably not for long. Knowing who has an active arrest warrant is important for a police officer, but it makes me uncomfortable to know that within a few years, I or my colleagues could be constantly passively scanning my neighbors.

A part of me wants to say that by relying on data and not face-to-face interactions, the investigators in Burn-In know everything and yet nothing about the people they pursue—but that’s not really true, is it? If you have enough data about a person’s movements, purchases, heath conditions, social and family connections, income, hobbies, and employment, you actually know a great deal. What you don’t have, however, is context in terms of culture, religion, or ethnicity. There are built-in biases in programing just as there are in human intelligence collection. The sheer amount of data can provide invaluable leads and insight, but it can also give the appearance of knowledge.

Burn-In drives this point home in almost every scene. Spy agencies can only dream of having the information that we give to Amazon or Facebook or Google. These companies hold the real crown jewels of intelligence: complete work-ups on billions of people updated in real time. The robotic partner of the main character in Burn-In pulls crucial details not so much from classified files but from open-source records and the social media diaries of countless people seeking connections. From the perspective of a former intelligence officer, I can’t overstate the power of so much information in the hands of AI-enabled systems.

Traditional human-source espionage relies on rapport-based connections, informed questioning, and a deep understanding of motivation and need. The robot in Burn-In uses signals intelligence at such an effective and immediate level that it is essentially human-source intelligence. Again, this is fiction, but, in the age of Fitbit and Apple Watches collecting almost infinite personal physical details, for how long?

In scene after scene, Singer and Cole show how biometrics and facial recognition are an important part of a massive torrent of information that humans can’t comprehend and certainly can’t effectively use without relying on AI programs and, yes, robots or drones. The robot knows when you’re lying based on changes in biometric readings, facial and eye movements, and changes in vocal patterns. But again, the robot or drone is only as wise as its programmer; AI systems have already shown troubling biases and flaws; facial recognition software has a much higher false ID rate with black, Asian, and Hispanic faces.

Activists fret about armies relying on killer robots, but some forms of artificial intelligence that don’t actually pull the trigger could still be a nightmare

I used to publish short stories in an even earlier life and marvel at the narrative that Singer and Cole weave in Burn-In. The book is tech-heavy for sure, but it is also intensely human. The way they build the relationship between Keegan and her new partner is effective and, yes, realistic. Distrust gives way to a wary acceptance and then actual trust, as real as in any human relationship, because the authors take their time. This anthropomorphic setup is not new in fiction: Viewers cheered for R2-D2 and C-3PO in Star Wars, and some of us—fine, it was me—might have cried at the end of Terminator 2 when the robotic cyborg assassin sacrifices himself for John Connor and humanity. What is new is that the drones and robots and AI in Burn-In don’t feel futuristic; they feel all too real. This is also a plot-driven novel, and it is indeed quite a plot. The writers have a story to tell, and they tell it well, with good old-fashioned writing overlaying the cutting-edge technology. There are also some flat-out gorgeous lines in the novel: “Dressed in brown canvas overalls topped by a blue blazer with gold buttons, he looked like an out-of-work construction worker going out to a watch club dinner. The discarded clothes of two men who would never meet.”

People such as myself who dismiss the power of microtargeted ads are still manipulated by them; that’s the whole point of these ads. People say these ads or articles or memes don’t really have the power to swing elections or referendums or purchases, but if they didn’t work, why are these companies so rich? The answer is these data-driven personal approaches work—or at least these corporations say they work, and because they are choking out the competition, there are increasingly less alternatives.

Burn-In is a powerful book not because it focuses on the technology but because it focuses on how we use that technology or how it uses us. The time to have a public debate over what it means to have a society that values convenience over privacy and trusts the motives of corporations over governments has pretty much passed because we’ve already decided in favor of convenience and corporations. These corporations are already framing the ongoing coronavirus pandemic as a chance to increase their monitoring and tracking of consumers, this time under the guise of public health. I don’t know how we begin to walk back from this path that ends with Burn-In being fact and no longer fiction, but the cop, the spy, the writer, and the citizen in me all know that we should try. And I would also very much like my own AI-powered robot.

Patrick Skinner is a former CIA operations officer who is now a police officer in his hometown of Savannah, Georgia.

Activists fret about armies relying on killer robots, but some forms of artificial intelligence that don’t actually pull the trigger could still be a nightmare