International relations scholars examine how the United States is seen on a global stage—and share who they would vote for in a presidential election. 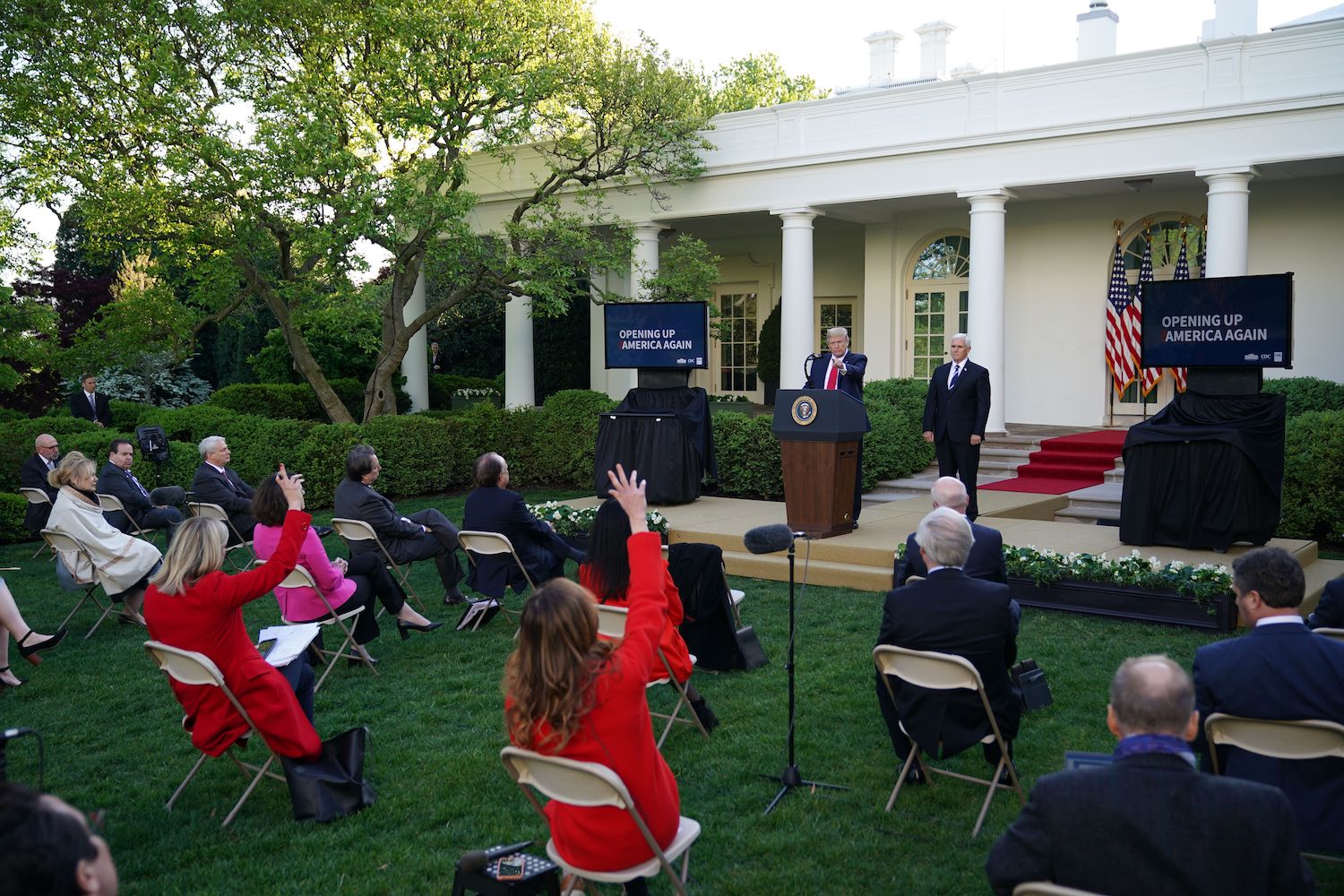 U.S. President Donald Trump takes questions from reporters during a news conference on the coronavirus in the Rose Garden of the White House on April 27. MANDEL NGAN/AFP via Getty Images

In the three months since the novel coronavirus first appeared in the United States, the White House and state governments have struggled to contain its spread. How has the United States’ troubled public health response impacted its place on the world stage? And how has it affected U.S. President Donald Trump’s reelection prospects? To find out, the Teaching, Research, and International Policy project at William & Mary, in collaboration with Foreign Policy and with support from the Carnegie Corporation of New York, surveyed international relations scholars at U.S. universities in the first week of May. These results are based on answers from the 982 scholars who responded to our invitation to participate in the survey. (Complete results of the snap poll can be found here.)

Respondents predict that the poor response to the pandemic will have a negative impact on the United States’ international reputation, leading to a loss of respect for the country and a decline in both foreign leaders’ and foreign publics’ faith in the willingness of the United States to provide global public goods and honor its commitments.

On April 14, Trump announced a 60-day freeze on U.S. funding to the World Health Organization. The move was met with loud and sustained criticism from Democrats in the United States and from U.S. allies abroad. Scholars echo the criticism—only 1.6 percent support Trump’s decision to eliminate financial support for WHO. Two-thirds believe the United States should increase financial support to WHO relative to pre-coronavirus levels.

Even though respondents support increased funding for WHO, they are decidedly mixed on their assessment of that body’s response to COVID-19. Thirty-seven percent of scholars rated WHO’s response “not very effective” or “not effective at all,” while a majority responded that the organization was “somewhat effective.” Taken together, these results might suggest that scholars believe the ineffectiveness of the WHO response could be related to a lack of funding.

Respondents were mixed on the capability of international health institutions to manage pandemics more generally. Fewer than half felt such institutions were capable of mitigating the spread of disease, and a third were simply undecided.

These results, however, are an improvement from 2014, when we asked the same question at the height of the Ebola epidemic in West Africa. Then, only 34 percent rated international institutions as “capable” or “very capable.” Even so, scholars now rate the international response to the coronavirus far below the approach to the Ebola response, suggesting history will ultimately be the judge of this pandemic.

The international relations scholars surveyed overwhelmingly prefer former Vice President Joe Biden as the next president. Across all the election questions we ask, Biden trounces Trump. A resounding 90 percent of scholars respond that they would vote for Biden if the upcoming election were held today, compared to 4.9 percent who pick Trump.

These results are reminiscent of a survey we fielded ahead of the 2016 election, when respondents were similarly unenthusiastic about voting for Trump. That year, we asked scholars which presidential candidate’s foreign-policy views best reflected their own. Eighty-two percent said Hillary Clinton compared to 3.8 percent who preferred Trump.

Again, these results mirror scholars’ opinions in the last presidential election. In 2016, 95 percent of scholars responded that Trump would not exercise good judgment as commander in chief, while 86 percent believed that Clinton would exercise good judgment in this role. Four years later, scholars remain supportive of the Democratic candidate for president and strongly agree that Trump lacks the judgment required for his role.

As the coronavirus pandemic rages on in the United States, the scholars’ preference for Biden extends to their belief in his ability to effectively manage the aftermath of that crisis, with 93 percent of scholars picking Biden over Trump.

Emily B. Jackson is a project manager for the Teaching, Research, and International Policy project at the College of William & Mary and an incoming Ph.D. student in the Cornell University Department of Government. Twitter: @emilybjack

Eric Parajon is a project manager for the Teaching, Research, and International Policy project at the College of William & Mary and an incoming Ph.D. student in the University of North Carolina Department of Political Science. Twitter: @EricParajon