After a relatively slow start to the pandemic, Russia is now seeing the number of cases grow rapidly.

Another Great Power Humbled by Coronavirus

Another Great Power Humbled by Coronavirus

When the U.S. Department of Defense announced in January 2018 that the United States was now in an era of “great power competition” with China and Russia, Pentagon officials probably didn’t think they would be competing to avoid being the world’s worst at anything.

While China has seen its global reputation badly damaged as a result of the coronavirus pandemic, the United States is still recording thousands of new cases daily—and watches on as China and European countries begin to lift restrictions on their residents.

Now, after recording a relatively low number of coronavirus cases in March, Russia has the second-fastest rate of new infections globally.

Did Putin fail? Like many of his counterparts at the outset of the pandemic, Russian President Vladimir Putin may have underestimated how bad his country’s outbreak could get. “The situation is on the whole under control,” Putin said on March 18. “Russia looks much better compared with other countries.”

Who’s counting? Despite such a high number of infections, its death toll is surprisingly low compared to other countries with similar numbers of cases. Russia has recorded roughly 2,000 deaths so far, a small fraction of the 32,000 recorded in Britain. This is due to Russia’s classification methods: In the United States, if a patient dies while testing positive for the coronavirus, the death is added to the official toll—in Russia, the cause of death has to be directly related to the virus, such as lung failure, for it to qualify for the official count.

“I believe Russia is counting accurately while others like Italy, Belgium and the United States are over counting,” Andrei Chernyayev, a physician who helped the Moscow Health Department write the rules for classifying coronavirus deaths, told the Moscow Times.

Where does Putin go from here? A relatively low death rate aside, Russia’s handling of the coronavirus has not helped Putin, who was planning for his next few terms in power just before the pandemic struck. While still high by Western standards, his support has declined to its lowest levels since he was first elected president. A recent poll by the Levada Center showed a 59 percent approval rating among the Russian public. The Kremlin said it was “not inclined to fully trust” the poll results.

It’s perhaps with these ratings in mind that Putin has ordered an easing of the country’s lockdown restrictions, starting today.

On May 7, Foreign Policy asked 11 Russia experts for an assessment of Putin’s 20 years in charge and what the future holds. Susan Glasser sums up how quickly things have changed for the Russian leader. “May 2020 was meant to be a 20th anniversary party for Putinism, but the party has been canceled,” she writes.

How Has the Coronavirus Damaged U.S. Prestige?

The Teaching, Research, and International Policy project at William & Mary, in collaboration with Foreign Policy, surveyed 982 international relations scholars at U.S. universities in the first week of May to gauge their feelings on the U.S. response to the coronavirus pandemic. The snap poll showed broad support for international health institutions, but widespread dismay at the U.S. role in coordinating a global response. Find more survey responses here. 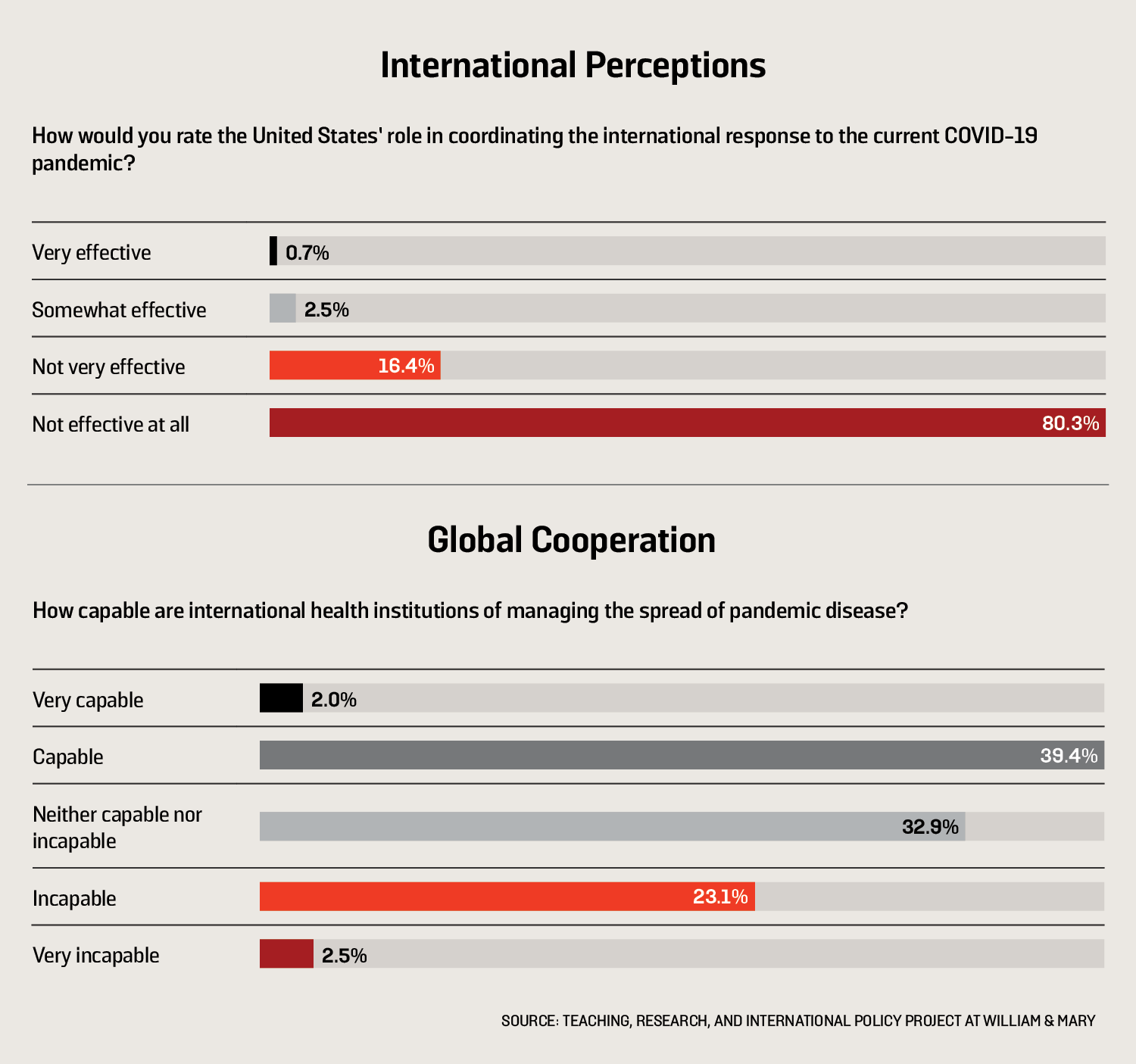 Juan Ibarrola, a security analyst, said the move is indicative of a flailing response to escalating violence. “His security strategy is not working and that is why he has had to order with this decree for the armed forces to support public security,” Ibarrola told the newspaper Milenio.

Venezuela opposition figures resign after botched raid. Heads have begun to roll in Venezuela’s opposition as Juan Rendon and Sergio Vergara both tendered their resignations to opposition leader Juan Guaidó, following the botched invasion attempt to which both men were linked.

Rendon and Vergara’s signatures, along with Guaidó’s, appeared on a contract allegedly signed between the Venezuelan opposition and Jordan Goudreau, the Florida-based security contractor, who led the operation. Rendon has admitted to initially contracting with Goudreau, but says he ended their working relationship in November of last year.

Venezuela’s chief prosecutor has called for the extradition of Goudreau, Rendon, and Vergara for their involvement in the foiled incursion.

U.S. opens door to prisoner exchange. In its own unique way, the Trump administration has publicly signaled its willingness to work with Iran on repatriating Iranian nationals currently in U.S. custody. “We have 11 of your citizens who are illegal aliens who we have been trying to return to your country. You suddenly SAY you want them back, so how about you send a charter plane over and we’ll return all 11 at once?” Ken Cuccinelli, the acting deputy secretary of U.S. Homeland Security wrote on Twitter on Monday in response to Iran’s call for a prisoner exchange. Iranian sources told Reuters that negotiations on such a move between the two countries have been ongoing “for some time.”

Democratic party pre-convention jostling. American progressives are trying to make their presence felt in the Joe Biden presidential campaign by calling for an annual $200 billion reduction in the U.S. defense budget should Biden succeed in ousting U.S. President Donald Trump in the upcoming November election. Foreign Policy’s Jack Detsch reported on Monday that a coalition of 50 progressive groups have called on the former vice president to reduce U.S. military spending in a letter to his campaign. In the letter, the authors say the increased military focus of U.S. foreign policy has left the United States “woefully ill-prepared to confront the growing transnational threats to human security we face today that do not have military solutions.”

It’s unclear how much of an impact such pressure will have on Biden, who succeeded in the Democratic primary contest while largely ceding the progressive lane to other candidates. “It’s been challenging getting specific commitments on many of these issues from the Biden campaign,” Yasmine Taeb, a senior policy counsel at Demand Progress and organizer of the letter, told Foreign Policy.

Swine fever detected in Togo and South Africa. Togo’s agriculture ministry on Monday reported an outbreak of African Swine Fever at a pig breeding farm near the capital Lomé; 44 pigs have died from the disease on the farm to date, and the government said preventive measures—including slaughtering pigs in the affected area—were being taken. On Sunday, South Africa reported an outbreak of the disease at a communal farm in the Eastern Cape province.

A golf course on the border of England and Wales has found itself caught in the crosshairs of conflicting advice surrounding coronavirus restrictions within the United Kingdom. The unique layout of Llanymynech golf course has 15 holes in Wales and two in England, with another hole straddling both jurisdictions. Lockdown rules have been relaxed in England but still very much in place in neighboring Wales, which has a devolved government separate from the U.K. government in Westminster. The club is under the governance of English Golf, which expects the sport to resume on Wednesday, further complicating matters.

“We’re trying to work it out. We have some holes in England and some holes in Wales, so we don’t know what we can do,” said Sian Whiteoak, the club’s secretary.

Welsh minister Jeremy Miles has warned English residents to avoid travelling to Wales, even if restrictions are lifted in their own locality, saying the Welsh authorities “absolutely have the power to fine” those who take non-essential journeys—which likely include rounds of golf.

NEW FOR SUBSCRIBERS: Want to read more on this topic or region? Click + to receive email alerts when new stories are published on China, Russia

Giorgia Meloni is expected to head the country’s most right-wing government since World War II.

The Kremlin’s plan to mobilize hundreds of thousands of forces is facing growing resistance.