With Putin’s help, Assad has constrained the capacity of the United Nations to deliver health supplies in opposition-controlled territory, which faces rising risk of the coronavirus.

Facing pressure from Russia, the chief ally to Syrian President Bashar al-Assad, U.N. relief agencies have been instructed to stop funding programs by private charities transporting lifesaving health services across the Iraqi border to northeastern Syria, dealing a blow to international efforts to respond to the coronavirus pandemic in opposition-controlled territory, according to diplomatic and relief sources and confidential U.N. guidance.

The United Nations informed its relief agencies several weeks ago that they were permitted to fund private charities operating in northeastern Syria only if they were registered in Damascus and authorized to work there by the Syrian government, which has proved unwilling, or unable, to meet the region’s health needs. The funding freeze comes as the World Health Organization (WHO) and other U.N. relief agencies have raised concerns that they lack sufficient access rights to respond to the health needs of some 2 million people in the region.

The aid crisis in northeastern Syria—which is inhabited predominantly by Kurds, displaced civilians, and anti-government groups—has worsened since the U.N. Security Council, acting under pressure from Russia, shut down a U.N.-sanctioned humanitarian aid hub on Jan. 10 at the Yaroubia crossing on the Iraqi-Syrian border. That deprived the U.N. of an explicit legal mandate to serve the region. The border crossing served as a key pipeline for WHO and private relief groups delivering medical assistance into northeastern Syria. Efforts by the U.N. to identify alternate routes to fill the gap have so far proved unsuccessful.

“[N]ew options are needed to fill the significant gaps and to continue the humanitarian assistance previously delivered through Ya’rubiyah,” WHO warned the U.N. Security Council last week in a confidential memo reviewed by Foreign Policy. “The urgency to respond is not only to control transmission in NES [northeastern Syria], but also to limit the spread of other areas of Syria that have not yet been affected.”

A bipartisan coalition of U.S. congressional leaders has urged the Trump administration to counter efforts by Russia, backed by China, to eliminate the aid crossings and to either ensure that U.N. agencies can continue to fund vital cross-border aid operations or form a coalition of like-minded countries to pick up the financial slack.

“[T]he closure of the Ya’rubiyah border crossing between Iraq and northeast Syria has hindered the overall humanitarian response and disrupted the UN’s ability to deliver specialized medical equipment,” the chairs and ranking members of the Senate Foreign Relations Committee and House Foreign Affairs Committee wrote Tuesday in a letter to U.S. Secretary of State Mike Pompeo. “Without access to these border crossings, the UN has been forced to suspend funding for many of its NGO partners, who must now rely on alternative, woefully inadequate, and easily manipulated means to deliver aid, such as land-based convoys from Damascus.”

Following the council vote on Yaroubia, Mark Lowcock, the undersecretary-general and emergency relief coordinator in the U.N. Office for the Coordination of Humanitarian Affairs (OCHA), appealed to the U.N. Office of Legal Affairs (OLA) to advise on the legality of continuing U.N. financial support for aid operations in northeastern Syria, according to four diplomatic and relief sources. OLA, according to those sources, concluded that the U.N. could only fund agencies registered and approved by the Syrian government. An internal U.N. paper, reflecting the new understanding, outlined more than two dozen U.N. activities that would “remain lawful” in northeastern Syria after the closure of Yaroubia. It recognized only the “funding to NGOs operating in NES who are authorized to operate by the Government of Syria.” U.N. officials, meanwhile, advised aid groups that the funding spigot would be turned off.

It is unclear whether Russia directly pressed the U.N. to cut funding to aid groups. But Russia’s U.N. ambassador, Vassily Nebenzia, recently made it clear that Moscow vigorously opposed reopening Yaroubia. “The Government of Syria is doing its utmost to fight the spread of COVID-19 despite cruel unilateral sanctions,” Nebenzia told the council in late April. “We strongly urge our colleagues not to waste their time on looking for a way to advocate, explicitly or implicitly for getting Al-Yarubiah back and saying that this be the ‘only solution.’” 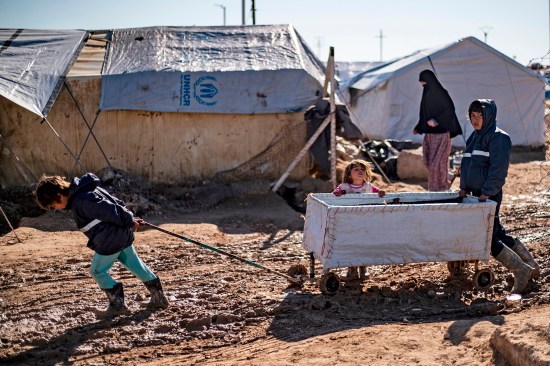 A boy pulls a cart in the mud at the Kurdish-run al-Hol camp for the displaced in northeastern Syria on Jan. 14. Kurdish authorities warned that a U.N. vote to scrap the Yaroubia entry point for cross-border aid would hamstring at least half of the health care response in the overcrowded desert camp brimming with tens of thousands of civilians. DELIL SOULEIMAN/AFP via Getty Images

The decision triggered fierce pushback from some U.N. relief agencies and private aid groups, which privately protested that the policy would result in a steep deterioration in humanitarian conditions in northeastern Syria, where the vast majority of people live in camps and communities outside of government control. Lowcock’s office subsequently backtracked, informing front-line relief groups that they shouldn’t consider any U.N. guidance on the legality of funding legally binding. One official familiar with the debate said the U.N. agencies are exploring ways in which they can help private aid agencies continue their work. But officials said new financial support from the U.N. has stopped.

Zoe Paxton, the relief coordinator’s chief spokesperson, denied the claims that the U.N. lawyers had ever issued an official opinion prohibiting funding for cross-border operations. “OCHA did not seek, receive or share official guidance from OLA that UN agencies could only provide funding to NGOs that operate in northeast Syria with the approval of the Government of Syria,” she told Foreign Policy. “Similarly, OCHA did not seek, receive or share official OLA guidance that UN agencies could not fund NGOs that provide cross-border assistance.”

“The Security Council decided not to renew the United Nations’ use of Al Yarubiyah border crossing,” Paxton added. “The United Nations continues to do everything possible to get help to people in need in northeast Syria, including by advocating for expedited and unhindered cross-line humanitarian access.”

U.N. Diplomacy In The Age of Contagion

Some delegations are repatriating vulnerable staff from New York amid a surge in coronavirus infections.

In the absence of U.S. leadership, the U.N. is struggling to carve out a role in the face of what may be the greatest threat since its founding.

WHO Warns of Pandemic’s ‘Catastrophic Impact’ on Syria

But Russia blocks the reopening of a critical border crossing for humanitarian aid.

The U.N. Security Council granted the legal authority to U.N. and private relief agencies in 2014 to deliver humanitarian assistance to millions of civilians in opposition-controlled territory through crossing points in Iraq, Jordan, and Turkey. The arrangement was established in response to Syrian efforts to use food and other humanitarian aid as a weapon of war, cutting off humanitarian assistance to communities suspected of sympathizing with anti-government forces. Syrian opposition forces also laid siege to government-controlled towns—though on a far smaller scale. Syrian authorities also routinely removed medical supplies from trucks entering rebel-held territory from Damascus, claiming they could be used to treat fighters.

Syria has long opposed the cross-border aid pipelines as a violation of its sovereignty, claiming that aid trucks are used to supply weapons to anti-government forces. In December, Russia and China vetoed a Security Council resolution that would have extended the mandate to run cross-border operations for more than a year. But several weeks later, on Jan. 10, Moscow negotiated a compromise that permitted aid to continue to flow through Turkey to northwestern Syria but ended Security Council approval for the Yaroubia crossing, the key entry point for medical supplies provided by WHO.

In a recent paper prepared for the 15-nation council, WHO raised concerns that the remaining aid pipeline from Damascus would not be able to meet the needs of civilians in northeastern Syria. “[I]n recent months the supply chain from Iraq has become less effective and reliable,” according to the WHO paper. 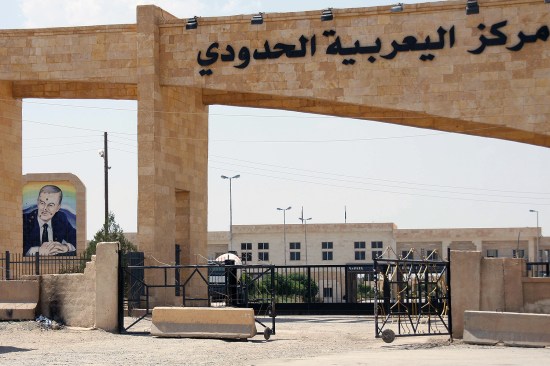 The Yaroubia border crossing between Syria and Iraq is pictured on July 23, 2012. The crossing, which the U.N. Security Council shut down in January under pressure from Russia, served as a key pipeline for the World Health Organization and private relief groups delivering medical assistance into northeastern Syria. AFP/Getty Images

An early draft of the paper called for the “re-opening of Yaroubia crossing as a matter of urgency,” but the proposal to reopen Yaroubia—which is vehemently opposed by Russia—was subsequently eliminated from the final paper. Instead, the revised version merely noted that the Damascus aid pipeline would not be able to address the needs posed by the coronavirus and that there was a need to find alternate routes.

The U.N., meanwhile, has explored the possibility of filling the supply gap by channeling aid through informal Iraqi crossing points, including the Kurdish-controlled border crossings at Walid and Fishkabour, which relies on damaged pontoon bridges, or a larger crossing point in Tal Abyad, Turkey.

“UN and NGO partners agree that the cross-line option cannot be adequately expanded to meet the needs in NES and will not be sufficient to support an effective response to COVID-19,” WHO reported. “Over the past three months only 31% of NGO-supported facilities have received medicines, supplies and equipment through cross-border mechanisms, including hospitals in Tabqa, Ar-Raqqa and Al-Hasakeh, and facilities in IDP [internally displaced persons] camps.”

Hardin Lang, the vice president for programs and policy at Refugees International, said much of the aid that does reach the north remains in government control.

“Anyone who thinks northeast Syria is going to be a priority for the regime is dreaming,” Lang said. The Syrian government, he added, “has a well-established reputation of manipulating humanitarian assistance coming into the country.”

Elizabeth Tsurkov, a fellow at the Foreign Policy Research Institute who has interviewed health providers throughout the region, echoed Lang’s concern.

She noted that the vast majority of aid flowing into northeastern Syria following the closure of Yaroubia went to a state hospital in Qamishli. Facing criticism, she said, WHO has since sought to distribute health care assistance more widely throughout the region. But she said very little coronavirus-related material is finding its way into opposition-held territory. The challenge at Qamishli, she said, is that patients must cross government checkpoints to get to the hospital. Most military-age men, she added, are unwilling to go to the hospital for fear of being recruited into the military or reserve service.

“A large share of the population cannot access the services at Qamishli hospital,” Tsurkov said. “It is only accessible to people perceived as loyal to the regime.”

U.N. Diplomacy In The Age of Contagion

Some delegations are repatriating vulnerable staff from New York amid a surge in coronavirus infections.

In the absence of U.S. leadership, the U.N. is struggling to carve out a role in the face of what may be the greatest threat since its founding.

WHO Warns of Pandemic’s ‘Catastrophic Impact’ on Syria

But Russia blocks the reopening of a critical border crossing for humanitarian aid.