The U.S.-Taliban peace deal is dealt yet another blow as Kabul moves its security forces into “offensive mode.”

Welcome to Foreign Policy’s South Asia Brief. This week, Afghans mourn an especially brutal day of attacks, the coronavirus is detected in a Rohingya refugee camp, soldiers from India and China come to blows, and why Facebook is apologizing about its work in Sri Lanka.

Welcome to Foreign Policy’s South Asia Brief. This week, Afghans mourn an especially brutal day of attacks, the coronavirus is detected in a Rohingya refugee camp, soldiers from India and China come to blows, and why Facebook is apologizing about its work in Sri Lanka.

“The entire cycle of life is being attacked—from cradle to grave.” That’s what Afghanistan’s first female ambassador to the United States, Roya Rahmani, told me on the phone after more than 100 people died in two separate attacks in her country this week. Rahmani’s words were carefully chosen. In the first attack on Tuesday morning, gunmen barged into a Kabul hospital’s maternity ward and targeted new mothers and their babies. Hours later in Nangarhar province, a suicide bomber struck a funeral for a local police commander.

Even for a country at war for two decades, Tuesday’s attacks shook the nation. The events were an especially brutal reminder to Afghans that no place—from a maternity ward to a funeral site—was safe. “What kind of monster could do this? Who kills newborn babies?” Rahmani said. “People are outraged and disappointed. But at the same time, we should not forget about the violence that occurs every single day.”

She’s right: As I write this, the Taliban have claimed responsibility for a car bombing near a military court in the city of Gardez on Thursday that killed at least five people.

Who is responsible? The Taliban have denied involvement in both of Tuesday’s attacks. While an Islamic State offshoot has claimed responsibility for the Nangarhar funeral bombing, there have been no claims over the maternity ward attack—an incident that even Afghan officials admit does not bear the usual Taliban hallmarks. Even so, President Ashraf Ghani has ordered the military to switch to an “offensive mode” against the Taliban.

Afghan National Security Advisor Hamdullah Mohib took a broader view of the last two months on Twitter, pointing to a trend of Taliban violence despite the U.S. peace deal signed with the militant group in February. “The Afghan government and our international partners, have a responsibility to hold the Taliban and their sponsors accountable,” he wrote. “If the Taliban can not control the violence, or their sponsors have now subcontracted their terror to other entities—which was one of our primary concerns from the beginning—then [there] seems little point in continuing to engage Taliban in ‘peace talks.’”

What’s next? It’s difficult to imagine a way forward for Afghanistan. Perhaps the biggest problem is that U.S.-Taliban talks—and the peace deal signed on Feb. 29—took place while the insurgent group refused to recognize the democratically elected government in Kabul. No matter who is responsible for Tuesday’s attacks, the environment of chaos makes it less likely that Kabul will make concessions to a group it has little reason to trust. “We have demonstrated how far we can go in order to achieve peace,” Rahmani said. “But we cannot sacrifice everything for the sake of an agreement.”

As Max Boot points out in the Washington Post, the pledge for the Afghan government to release Taliban prisoners—a sticking point for the insurgent group—came from the Trump administration and not from Kabul, making it all the more difficult to move beyond the current impasse.

Another battle. Amid all of this, there is another war Afghanistan now faces: the fight against the coronavirus. The country now has more than 5,000 confirmed cases, with the number doubling around every 10 days. But as Tuesday’s attacks show, no hospital, doctor, or nurse is safe at work. Whoever planned these attacks and whatever their goal, the outcome is an even more heightened sense of fear and despair—even in a country that has seen it all.

FP Conference Call—A programming note: On Friday at 11 a.m. EDT, I will host a special FP Insider Conference Call on how emerging markets will manage their economies amid the pandemic. Sign up here to listen to the discussion and pose questions to Morgan Stanley’s head of emerging markets and chief global strategist, Ruchir Sharma, and Dambisa Moyo, an economist and the author of Edge of Chaos.

Coronavirus cases keep rising. As I’ve written previously, it remains somewhat of a mystery why there aren’t more confirmed cases of the coronavirus in South Asia. Even with low rates of testing, the region’s health care systems have yet to be pushed to capacity. But as shown below, new cases are still rising, with total numbers doubling about every two weeks. Several countries are beginning to ease their lockdowns, in large part because they have substantial populations of daily wage and migrant laborers who need to put food on the table. Once people return outside, there is a reasonable chance for a surge in positive cases and deaths. The next few months will be crucial to observe, but one problem remains that rates of testing remain too low for accurate portrayals of how quickly the pandemic is spreading.

India and China come to blows—literally. This week, seven Chinese and four Indian troops were injured in a brawl that began on their shared border, along India’s northeastern state of Sikkim. Dozens of troops were involved in the physical fight. These kinds of standoffs are actually not uncommon, but as the BBC reports, no bullets have been fired across the border in four decades. The two countries, which share a 2,100-mile border, last fought a real war in 1962. 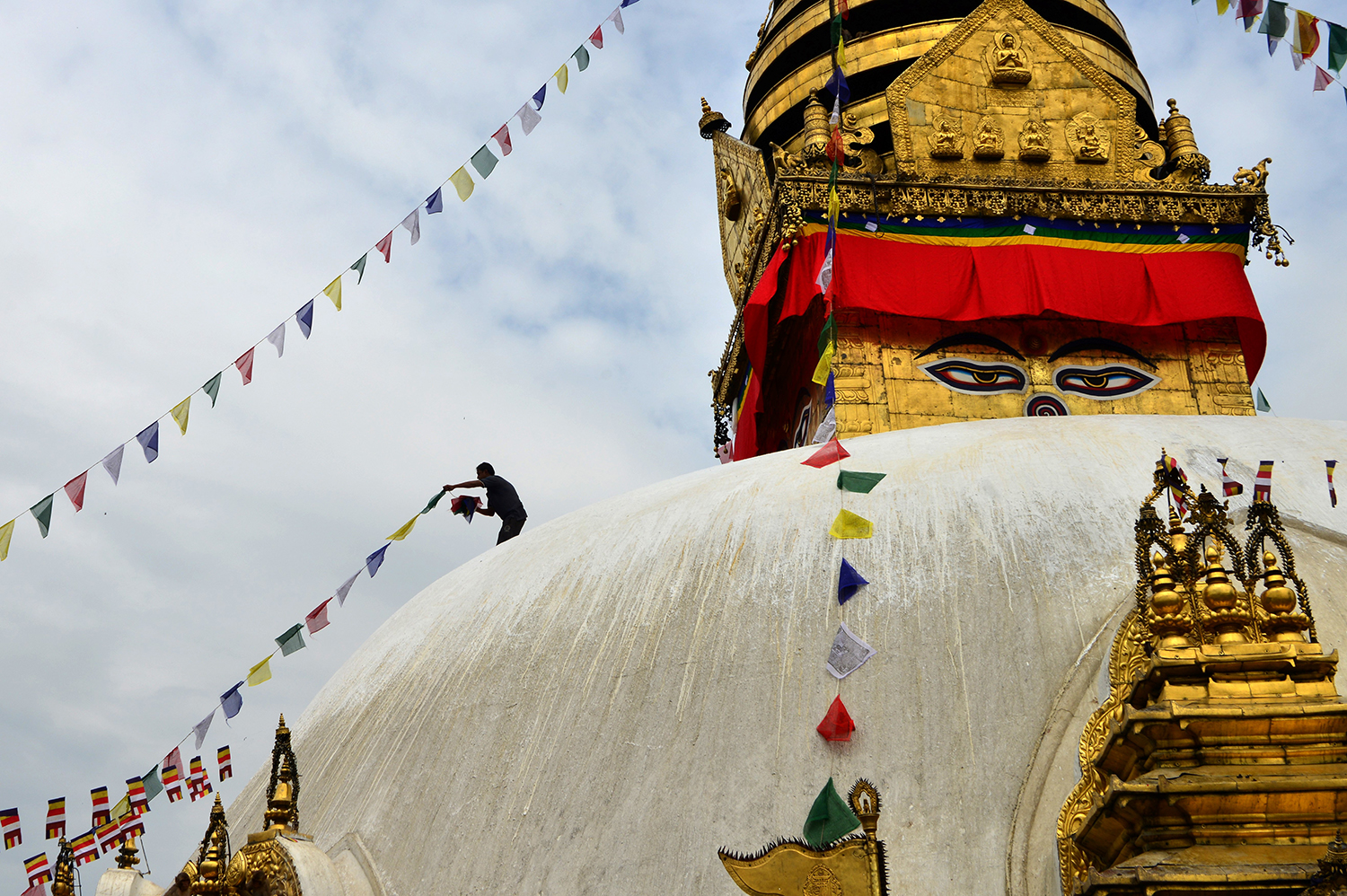 A Nepalese Buddhist devotee hangs prayer flags during the Buddha Purnima, which marks the Buddha’s birthday, in Kathmandu, Nepal, on May 10, 2017.PRAKASH MATHEMA/AFP via Getty Images

Buddhists across South Asia marked the birth anniversary of Siddhartha Gautama last week amid restrictions imposed because of the pandemic. Our question: Where was the Buddha born?

India’s $266 billion stimulus plan. In a speech on Tuesday, Indian Prime Minister Narendra Modi pledged $266 billion—about 10 percent of the country’s GDP—to jump-start the economy. But Modi stopped short of announcing specific spending plans, instead saying that this would be “India’s century” if its citizens boosted domestic consumption. “Be vocal about local!” he said. New Delhi has approached global investors with a pitch that India could serve as an alternative to China as a manufacturing hub, according to the Financial Times.

Facebook apologizes to Sri Lanka. Facebook has released independent assessments of its impact on global human rights, and it found its role in stoking deadly violence in Sri Lanka in 2018 serious enough to merit a formal apology. The riots were stirred in because of incendiary anti-Muslim content on the platform, leading to a state-imposed emergency. “We deplore the misuse of our platform,” read the Facebook statement to Bloomberg. “We recognize, and apologize for, the very real human rights impacts that resulted.” Facebook has more than 4 million daily active users in Sri Lanka.

India’s contact tracing app. Last week, I wrote about Aarogya Setu, India’s mandatory coronavirus contact tracing app, and how hackers had raised concerns about its security. But banks and workplaces have been checking peoples’ smartphones to make sure they have the app installed. BuzzFeed’s Pranav Dixit has an excellent follow-up. In Bengaluru, a software engineer hacked into the app’s code to disable requests for personal information, using the “harmless shell” of an app as a virtual green badge. It’s likely many others will share the hack as Indians push back against mandatory surveillance requests.

It’s easy to feel depressed reading about how various governments have botched their responses to the coronavirus. But it’s not all bad news. In Pakistan, several nonprofit organizations across the country have stepped in where the government has fallen short, as Neha Maqsood reports for Foreign Policy from Karachi. The groups are providing the country’s poor with free meals, grocery items, ration bags, and cash.

While Maqsood describes what she’s seeing in Pakistan, I’ve seen similar reports from other parts of the region, with NGOs, Rotary Clubs, and neighborhood alliances getting together to help people in their communities. In many ways these are the worst of times, and so the benevolence and care seen within communities make for the most heartening stories to emerge in the last two months.

If you didn’t know the answer already, this one may have been harder to work out. Buddhists say the Buddha was born in Lumbini, in modern-day Nepal, although he grew up in Kapilavastu, in India, and achieved his enlightenment in Bodh Gaya, also in modern-day India.