Kabul blames the Taliban for the killing of mothers and newborn babies but questions about the culprits remain.

KABUL—In the early morning hours on Wednesday, Mohammed Zahir buried his wife’s lifeless body, marks of a gunshot wound still visible on her head. In the afternoon, he roamed the city’s children’s hospitals, trying to find his newborn child, which he’d been told was a boy; but in the evening he came home empty-handed, and he broke down.

“I don’t even know what he looks like or if he is even alive,” the 30-year-old laborer said, barely able to speak, his swollen eyes filled with trauma and tears. It took Zahir several more determined hospital visits, but finally, early Thursday after a long chase, he was able to find his baby—he was surprised to discover it was actually a girl—and take her home.

On Tuesday, gunmen dressed in police uniforms stormed a 100-bed hospital in Afghanistan’s capital of Kabul, where the aid group Médecins Sans Frontières (MSF) runs a maternity clinic, killing 24 people—most of them delivering mothers—and injuring dozens more. Afghan President Ashraf Ghani has since announced an active offensive to fight militant groups, including the Taliban, sparking speculations about what the switch might mean for peace negotiations. —

But the complex array of militant groups now fighting in Afghanistan suggested that the latest violence could as easily have emanated from the Islamist State, which seeks to disrupt the U.S.-orchestrated peace process between the Afghan national government and the Taliban. Tuesday’s attack, which hasn’t been claimed by any group, came on the same day that a suicide bomber targeted the funeral of a local police commander in the country’s Nangarhar province, killing 32 people and injuring 133 and which was later claimed by the Islamic State. The Taliban were quick to deny both incidents—but the Afghan government has blamed the militants for the hospital attack regardless.

MSF officials said they were “devastated after [the] sickening attack on pregnant women, mothers and their babies while seeking healthcare at our maternity ward in Dasht-e-Barchi hospital,” a west Kabul neighborhood home to about 1.5 million people—most of them ethnic Hazara, a minority group that continues to face discrimination. Since the beginning of the year, more than 5,000 children have been delivered at the clinic.

Thomas Ruttig, an expert on Afghanistan, believes that the hospital attack “fits the sectarian approach of the Islamic State … which primarily acts against ethnic and religious minorities,” and he likened it to an attack on a Sikh temple in Kabul in March that was claimed by the group. The Taliban, he said, showed anti-Shiite tendencies during their rule between 1996 and 2001 and carried out some Shiite massacres but have meanwhile “officially turned away from such positions” since then, a position reinforced by a tentative truce with Washington was announced at the end of February.

The hospital attack has since turned into a political blame game, with the different sides accusing each other of fomenting violence even as the nation struggles with a wave of coronavirus infections. 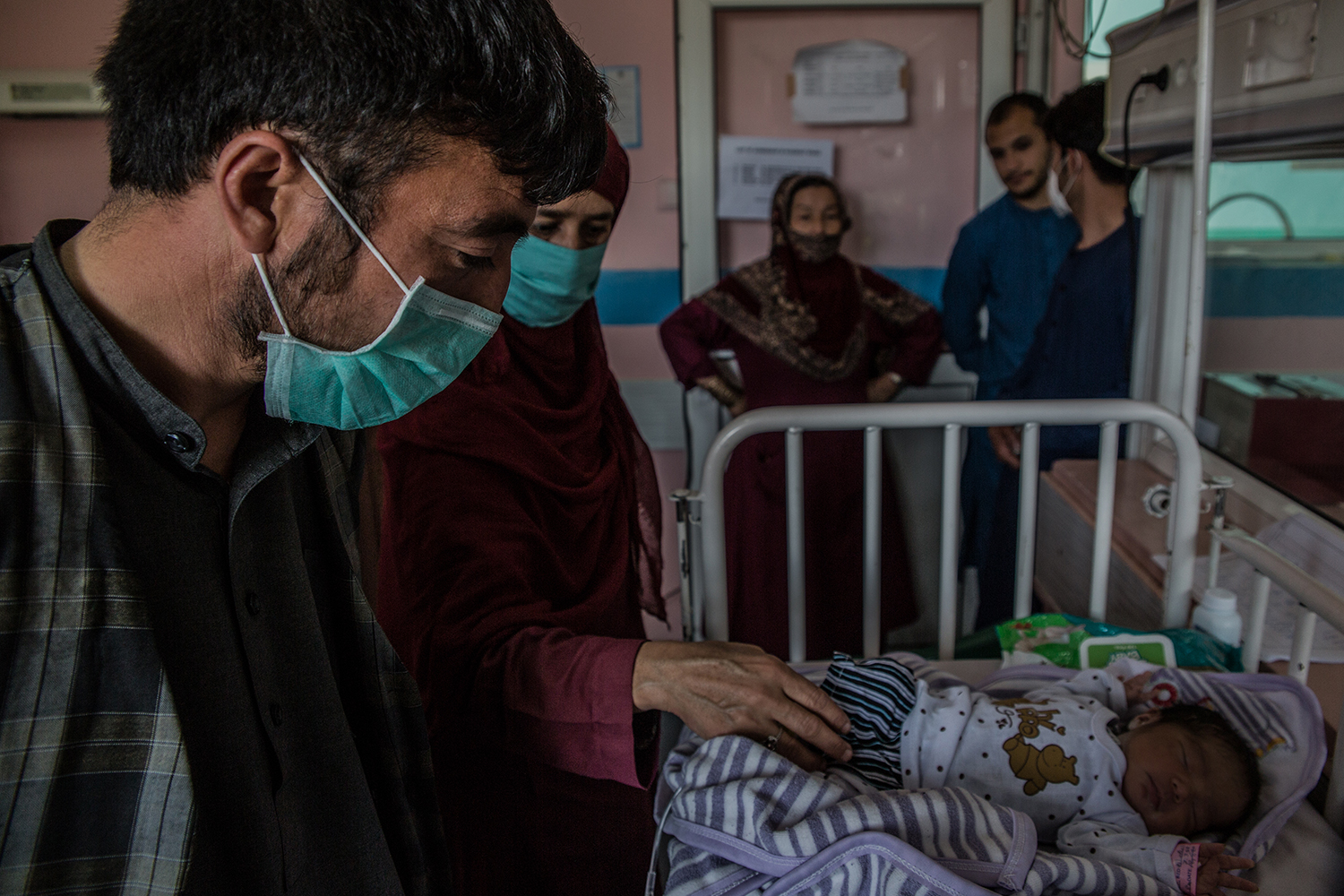 Mohammed Zahir, 30, who lost his wife in the attack after she had given birth to a baby boy, roams Kabul’s hospitals on May 13 hoping to find his son, whom he had not yet met. Stefanie Glinski for Foreign Policy

Tuesday should have been a happy day for Zahir, who already has three children. At 5 in the morning, just as the sun was rising, he took his wife, Tahira—then in labor—to the hospital. Shortly after 6:30 a.m., he received a call telling him about the birth of a baby boy. It is not common for fathers to attend their children’s births in conservative Afghanistan, and maternity wards usually don’t allow men to enter. Zahir was told to pick up his wife and son around 11 a.m., but the attackers struck before he reached the hospital.

Immediately after the attack, which lasted several hours and saw the assailants killed, Ghani addressed the nation, publicly stating his mistrust toward the Taliban.

“In order to defend the country, the security, and safety of the people and public facilities and to repel and defeat the attacks and threats of the Taliban and all terrorist groups, I instruct the country’s security and defense forces to return to offensive mode, instead of defensive mode,” he said. His office, however, later added that it “will be ready to take any step towards peace.”

With this, the government officially launched its spring offensive—something the Taliban have usually done in previous years but have so far refrained from this year. “Taliban attacks in the past weeks, the latest on Afghan National [Defense and] Security Forces [ANDSF] in Laghman, the suicide attack in a funeral in Nangarhar, and some other attacks around the country took a toll on the ANSDF and civilians,” a spokesperson for the presidential palace told Foreign Policy.

The Taliban, which called Ghani’s announcement a declaration of war, claimed that Islamic State militias carried out the attack, adding that “from the day the agreement was signed between the Islamic Emirate and the United States and endorsed by national and international parties, the Ashraf Ghani administration has been trying to create hurdles for the peace process.”

U.S. Special Representative Zalmay Khalilzad called for the Taliban and the Afghan government to cooperate in spite of the latest violence. “Failure to do so leaves Afghanistan vulnerable to terrorism, perpetual instability & economic hardship,” he said in a tweet.

But Ghani’s national security advisor, Hamdullah Mohib, accused the Taliban of not being able to control the violence, saying that “their sponsors have now subcontracted their terror to other entities, which was one of our primary concerns from the beginning.” Overall, a reduction of violence had been observed by all parties of the conflict prior to the U.S.-Taliban deal, signed on Feb. 29, which was supposed to bring an end to the almost two-decade-long war.

But violence has increased over recent months as the Taliban have stepped up fighting, avoiding U.S. forces while killing hundreds of Afghan soldiers and casting doubts on whether direct talks between the government and Taliban would happen. The insurgent group announced that 5,000 of its fighters had to be released before it would take up direct negotiations.

And following the brutal attack on the maternity clinic, many Afghans took to social media, blaming the Taliban; while security officials tried to push the narrative that the assault had been a joint operation between the Islamic State, the Haqqani network, and Lashkar-e-Taiba, a prominent extremist group mainly active in South Asia. 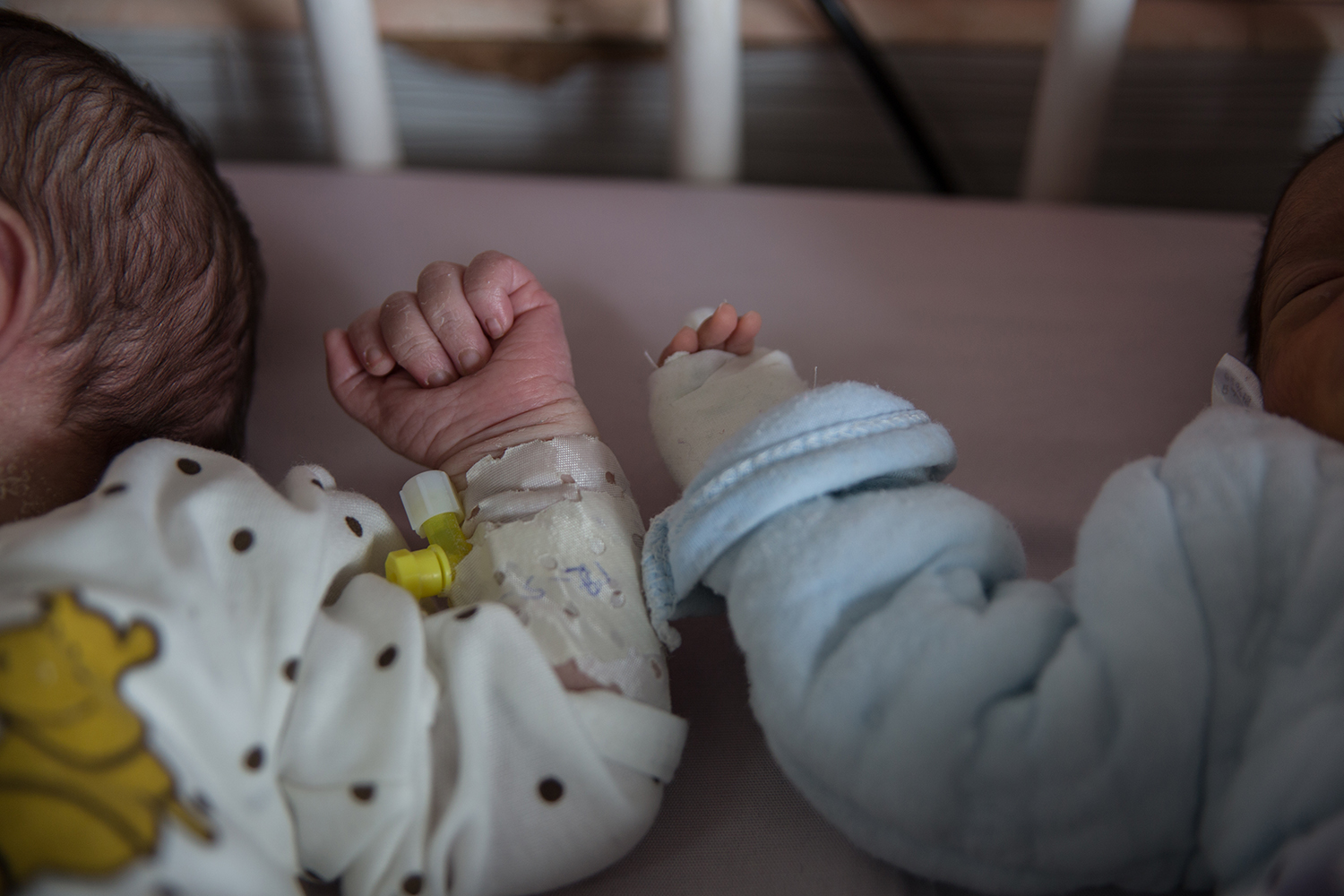 Newborn babies—whose mothers have not been found yet—lie at Ataturk Children’s Hospital in Kabul on May 13 after the maternity ward attack. Stefanie Glinski for Foreign Policy

Yet while it might be easy to assume that both Ghani’s condemnation and his announcement that forces would resume an offensive operation would augur the death of efforts to initiate a peace process, Andrew Watkins, the International Crisis Group’s senior analyst for Afghanistan, said the tragic reality of the peace process was that “days like Tuesday were always a possibility.”

“The process was designed to initiate talks regardless,” he said. “If you distill the Afghan government’s response beyond its catalog of Taliban transgressions, they effectively demand a cease-fire before moving forward with the talks. It is key to note that the Afghan government has adopted this posture at more than one point in the past.”

But even as the international community called for a cessation of violence during the coronavirus pandemic, attacks have peaked throughout Afghanistan. According to the United Nations, 1,293 civilians were wounded or killed in Kabul alone during the first quarter of 2020. Despite this being the lowest figure since 2012, violence grew considerably during March, and civilian deaths caused by militant groups increased by 22 percent compared with the first quarter of 2019.

At Ataturk Children’s Hospital, eight newborn babies—brought here by ambulances after being evacuated from the maternity clinic under attack—have remained in the care of doctors and nurses since Tuesday. Eleven babies had already been identified and picked up by relatives. “Several families came by, in search for their lost babies,” said Javed Ahmad, the maternity ward’s manager. Wrapped in fresh blankets, the eight remaining children lay on beds quietly, their mothers’ lives likely lost.

Ahmad admitted that the hospital had no capacity for DNA testing but instead relied on the small wristbands, wrapped around the newborns’ arms, carrying their mothers’ name—their only way of identification. Outside the hospital, a mob of women had gathered, demanding the babies be given to them and offering to care for them.

Back in Dasht-e-Barchi, Humayon Wafa, a 20-year-old police officer, sat outside the hospital that was the center of Tuesday’s attack. Life outside the clinic continues as usual, with a busy fruit and vegetable market just steps away from the entrance, and families shopping in preparation for the night’s iftar, the breaking of the fast during the Islamic holy month of Ramadan.

Wafa, who witnessed the attack, hasn’t taken a break in several days. “In Afghanistan, we are always on edge,” he explained. “We hope for peace, but we know that violence could erupt any second. Here in Kabul, life is fragile, even for newborn babies.”

How Is China Responding to the U.S. Protests?

Hong Kongers’ Route to Britishness Winds Through the Ruins of Empire

Biden Could End Kleptocracy’s Grip on the United States

A Moment of National Shame and Peril—and Hope