As the lockdown begins to ease up, coronavirus patients in ICUs across the country are just waking up—and beginning a long road to recovery.

PESCARA, Italy—“Are you with us D’Agostino?” the nurse asked through her personal protective equipment. “Franco, are you with us?” On hearing his name, the patient opened his eyes. “It was as if a chill went through my body,” said Franco D’Agostino, a 54-year-old metalworker born in Penne, a town in the Italian province of Pescara. After being intubated and sedated for 18 days, he was free of the coronavirus and nearly ready to return home to embrace his wife and three daughters. He felt lucky that he had survived: “It’s not a common flu. I didn’t have any preexisting conditions. This thing will kill you if you don’t treat it properly.” 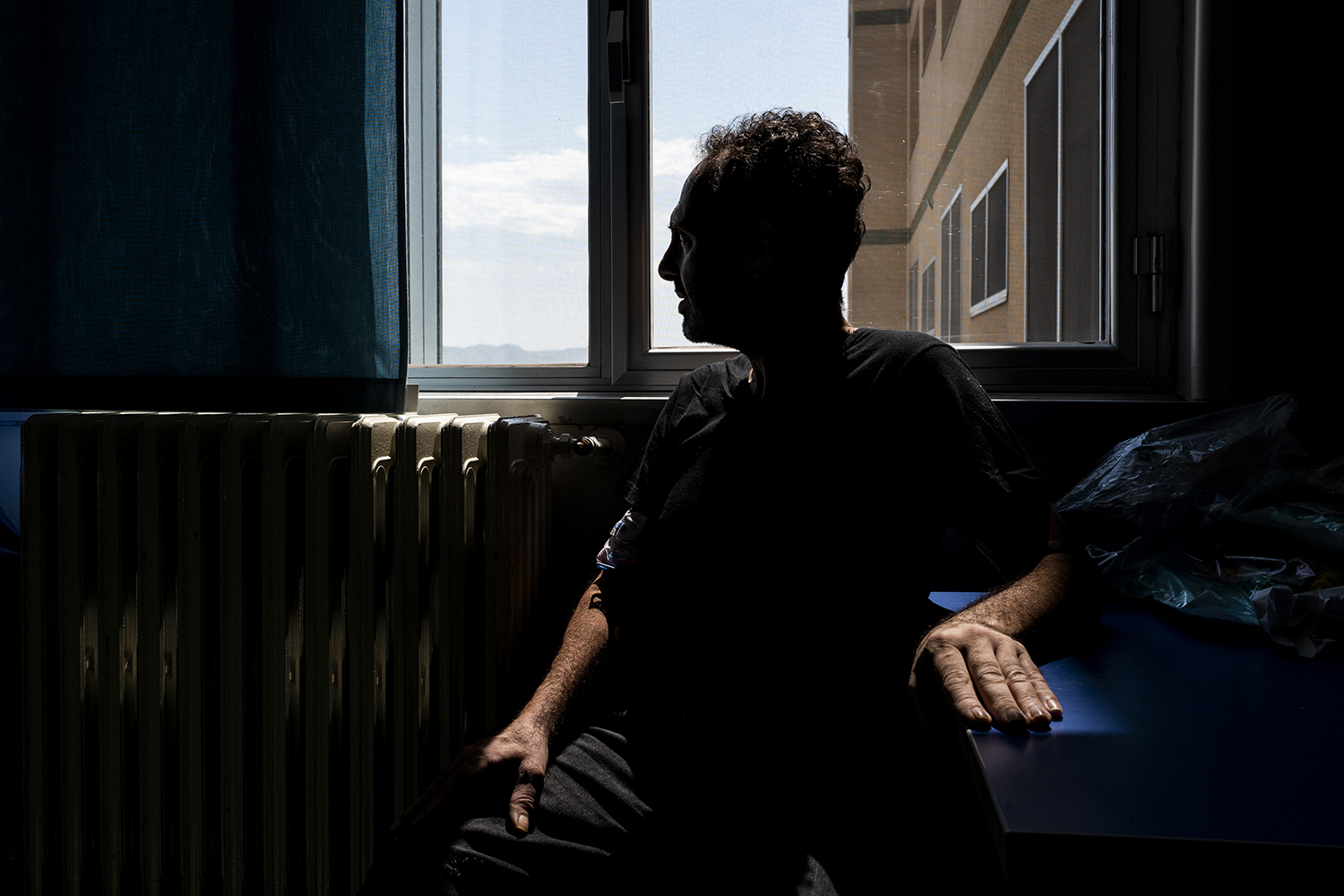 D’Agostino waits at Santo Spirito Hospital in Pescara, Italy, on April 27 for an ambulance to take him home. 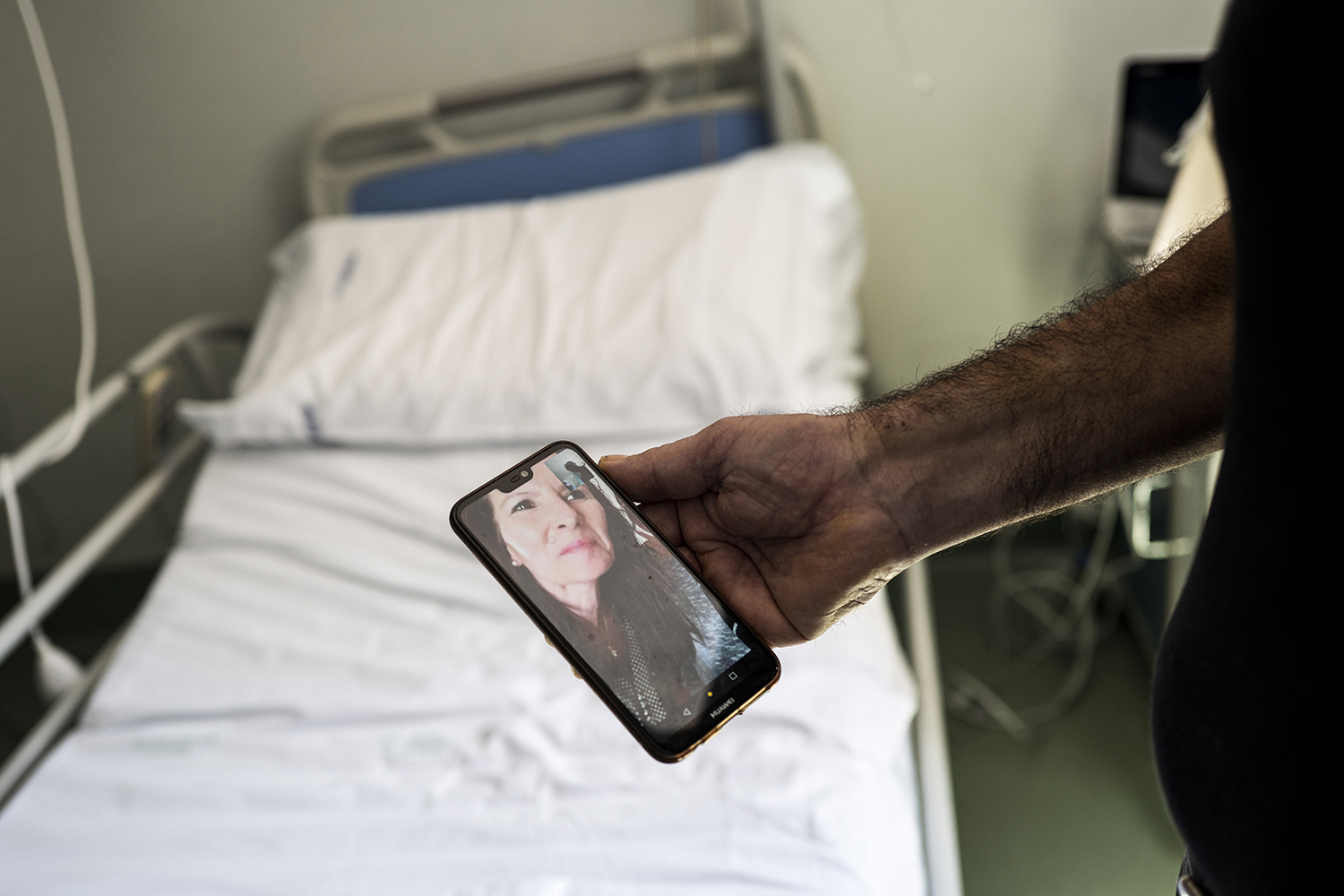 D’Agostino talks to his wife in Penne from Santo Spirito Hospital on April 27, informing her that he is finally returning home.

Italy began easing restrictions and reopening some businesses on May 4, entering “phase two” of its lockdown after nearly two months. More than 31,000 Italians have died from COVID-19—the highest death toll in the European Union—but over 115,000 people have recovered, as of May 14. Hospitalizations have been declining since the third week of April. And across the country, many such as D’Agostino who have defeated the coronavirus are now waking up after intubation—beginning the next phase of their recovery. 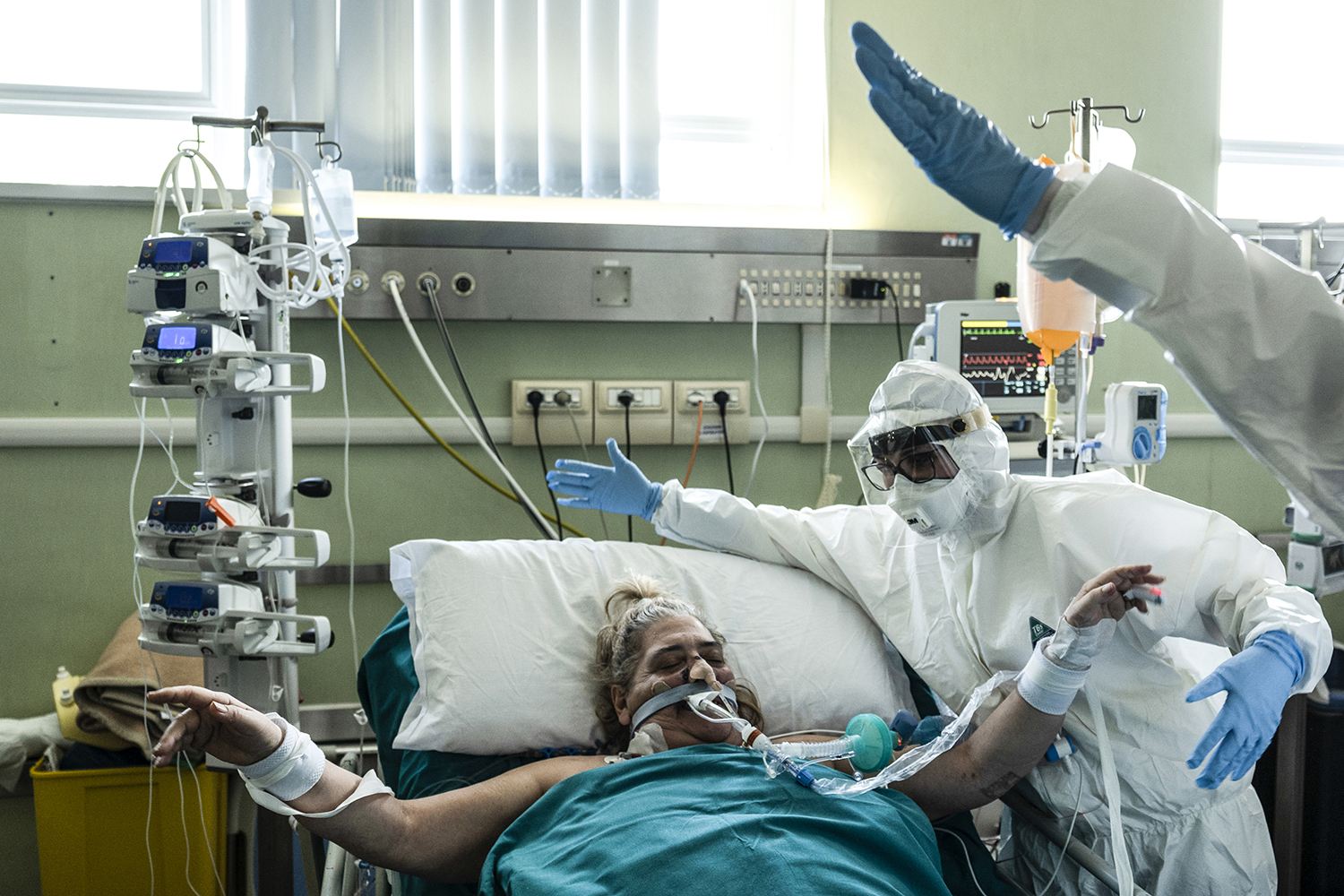 Gina Di Giacobbe, still intubated after coming out of a pharmacological coma, receives training from hospital staff to regain strength in her arms at Santo Spirito Hospital on April 23.

Pescara, on the Adriatic coast, is one of the hardest-hit provinces in central and southern Italy. As of May 14, 1,467 people had tested positive for COVID-19 in Pescara, out of a population of 317,000—a per capita rate worse than in Bari, Naples, or Rome. “In my ward, in the months of March and April, we recorded 36 percent of the deaths [in the province],” said Antonella Frattari, the head of intensive care at Santo Spirito Hospital in Pescara.

Many patients in Frattari’s intensive care unit suffered from acute respiratory distress syndrome (ARDS), which causes a person’s respiratory rate to double as the level of oxygen in the blood decreases. Despite having very low oxygen, people with ARDS may not realize the seriousness of their condition. Often, the only solution is intubation—sometimes for weeks—to let the lungs rest. Many patients, panicked and afraid of not waking up, make what they fear may be a final call to a loved one. “Unlike others, COVID patients who need to be intubated are lucid and aware,” Frattari said. “They think about their family members. It is a very touching moment, and we take part in that pain every time.” 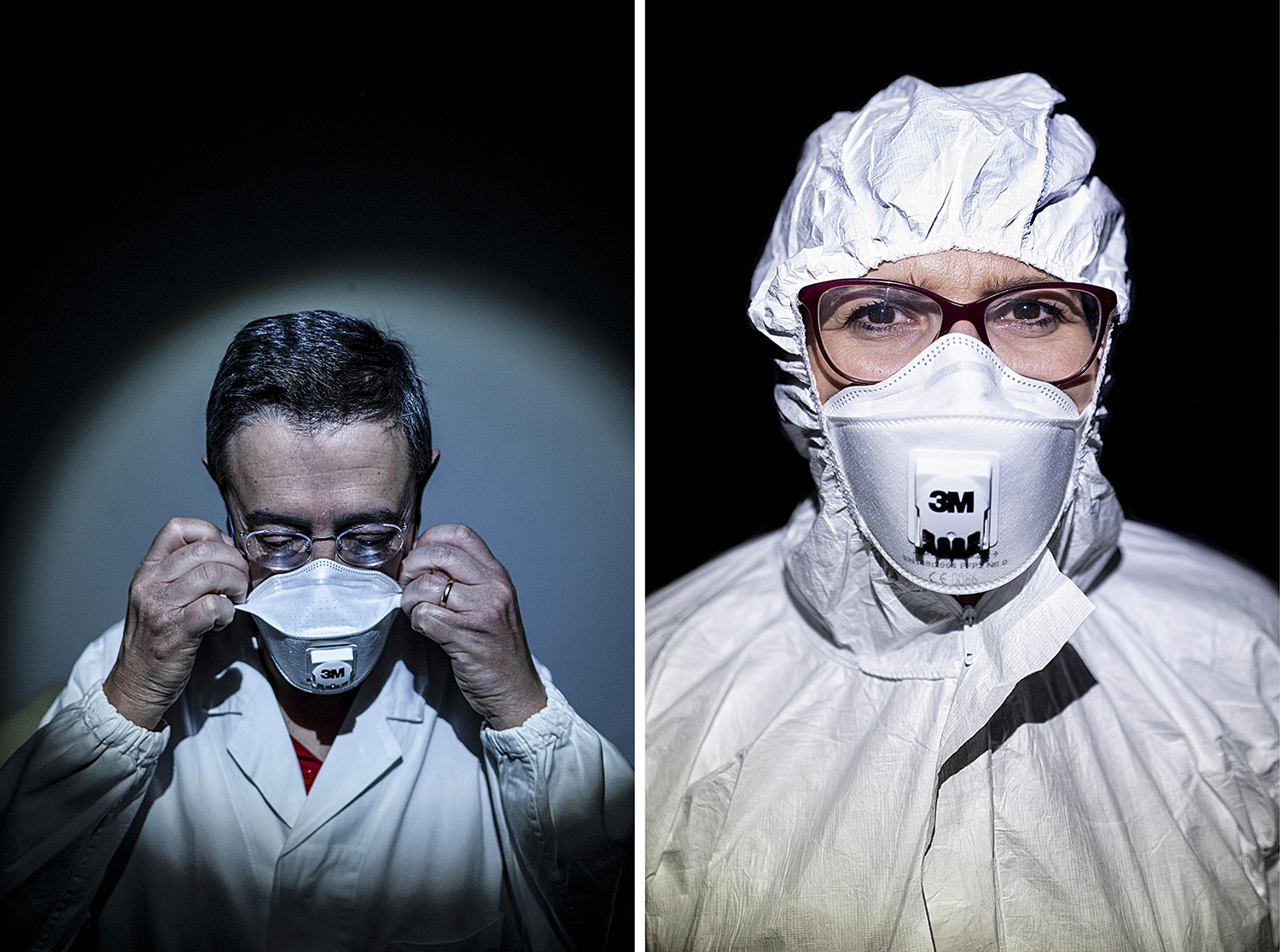 Then, the patient is anesthetized, and the invasive procedure begins, with a breathing tube inserted through the nose or mouth to the trachea. During the long slumber, patients are in limbo: Deep sedation contributes to a feeling of suspension. “We administer sleep-inducing drugs that cause amnesia and the patients experience a sort of gap in time where it is not clear what happened immediately before and after intubation,” Frattari said. “They are powerful painkillers, much stronger than morphine.”

The removal of tubes is an overwhelmingly emotional moment, even for experienced doctors. “For us, it is also a sentimental success, not just a professional one,” Frattari said. 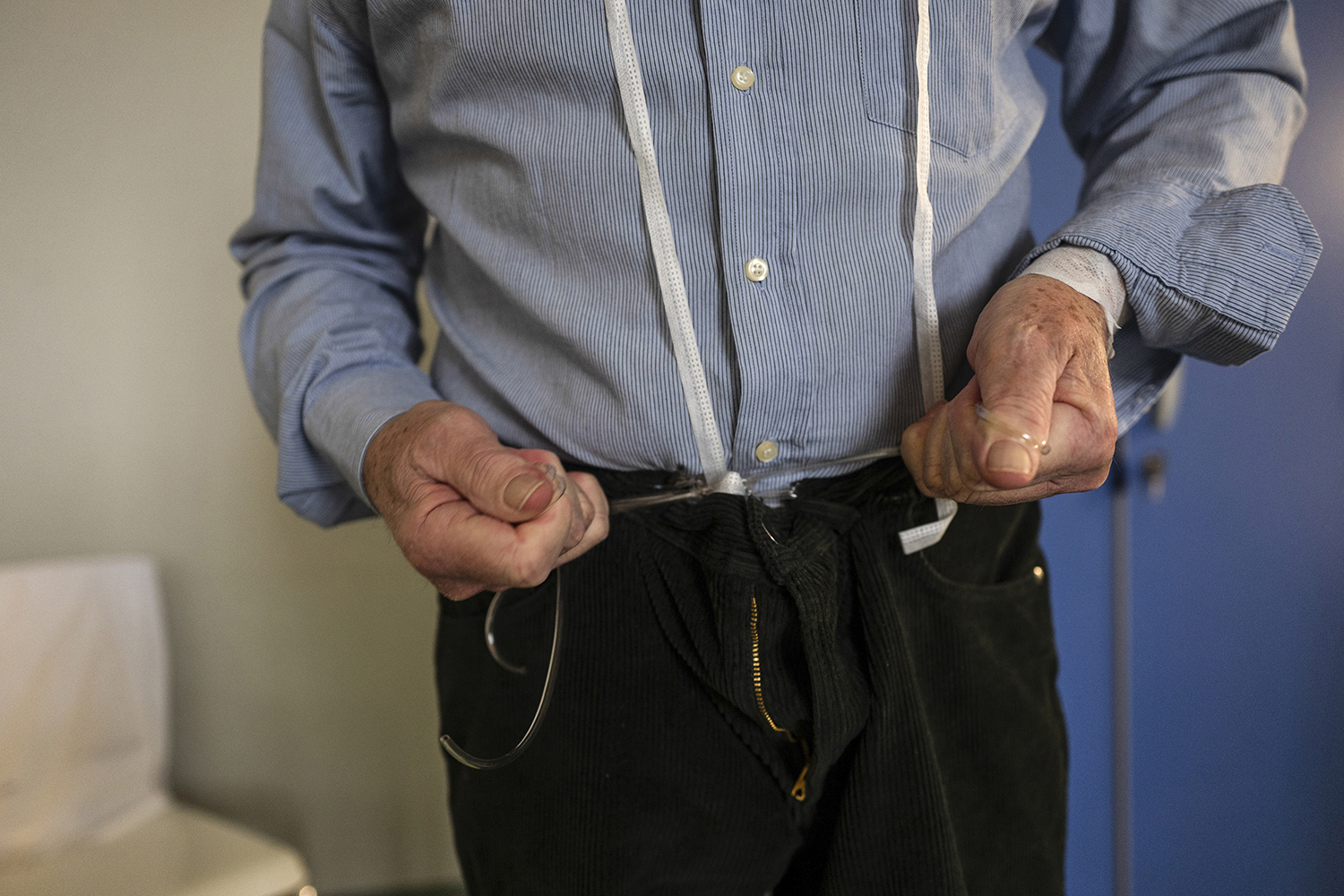 Lino Profeta prepares to depart Santo Spirito Hospital on April 20. He lost 22 pounds while in the hospital for COVID-19—a nurse gave him an infusion tube to tighten his loose trousers as he dressed to return home.

Family members also can’t be present when the coronavirus patients are intubated or extubated, meaning that they wake only among medical staff, most of them likely to be strangers. “The awakenings are not all the same,” Frattari said. “Some people are calm and awaken easily. Others are confused and agitated and would like to tear out all the tubes stuffed into their nose, mouth, hands, and bladder.”

Before being intubated on March 30, Lino Profeta, 68, was very afraid. “Someone whispered to me, ‘Now you will sleep a little.’” All that he recalls from those five days is a recurring nightmare in which he tried to understand how he contracted the virus. After they wake up, patients begin so-called respiratory weaning, in which the ventilator supports are gradually reduced until the tubes are removed and the patients regain their ability to breathe. “When they removed the tubes, I felt like I was reborn,” Profeta said. “I asked for something to drink, and the nurse gave me a cocoa protein drink—the best thing in the world, a relief.” 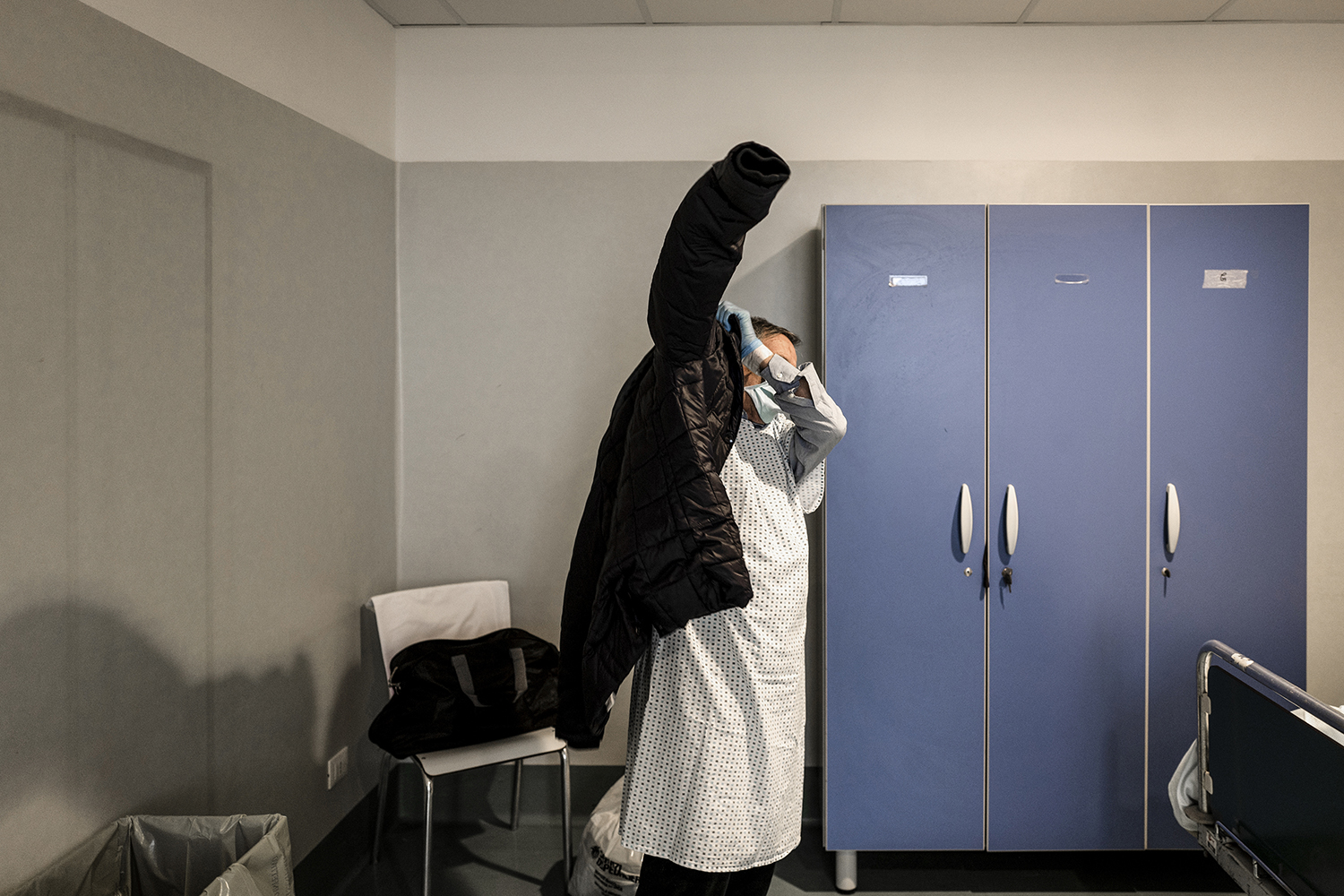 Profeta gets dressed to leave Santo Spirito Hospital on April 20 after more than a month in the hospital.

After being woken, Profeta was then transferred to the infectious disease ward, where extubated COVID-19 patients who have made it out of the woods are treated as they begin their full recovery. The ward is headed by Giustino Parruti, a member of the Abruzzo region’s coronavirus task force and Frattari’s husband. Parruti is involved in an international genetic study with the University of Pennsylvania that seeks to understand what determines the differences in how the coronavirus manifests in patients, using samples from those treated in Abruzzo. Profeta considers himself lucky to have such good care. “He came to visit us showing empathy: a smile, a word of comfort. He wasn’t cold,” he said.

Parruti and Frattari have been on the coronavirus front lines day and night for more than two months. But even as Italy sees a significant number of recoveries, the virus still poses a threat. “With the end of the lockdown, we must go back to living by defending ourselves,” Parruti said. “If in the coming weeks we continue to follow the rules for protection and distancing, we will be able to greatly reduce the risks. Otherwise it won’t take much for the infections to pick up again.” 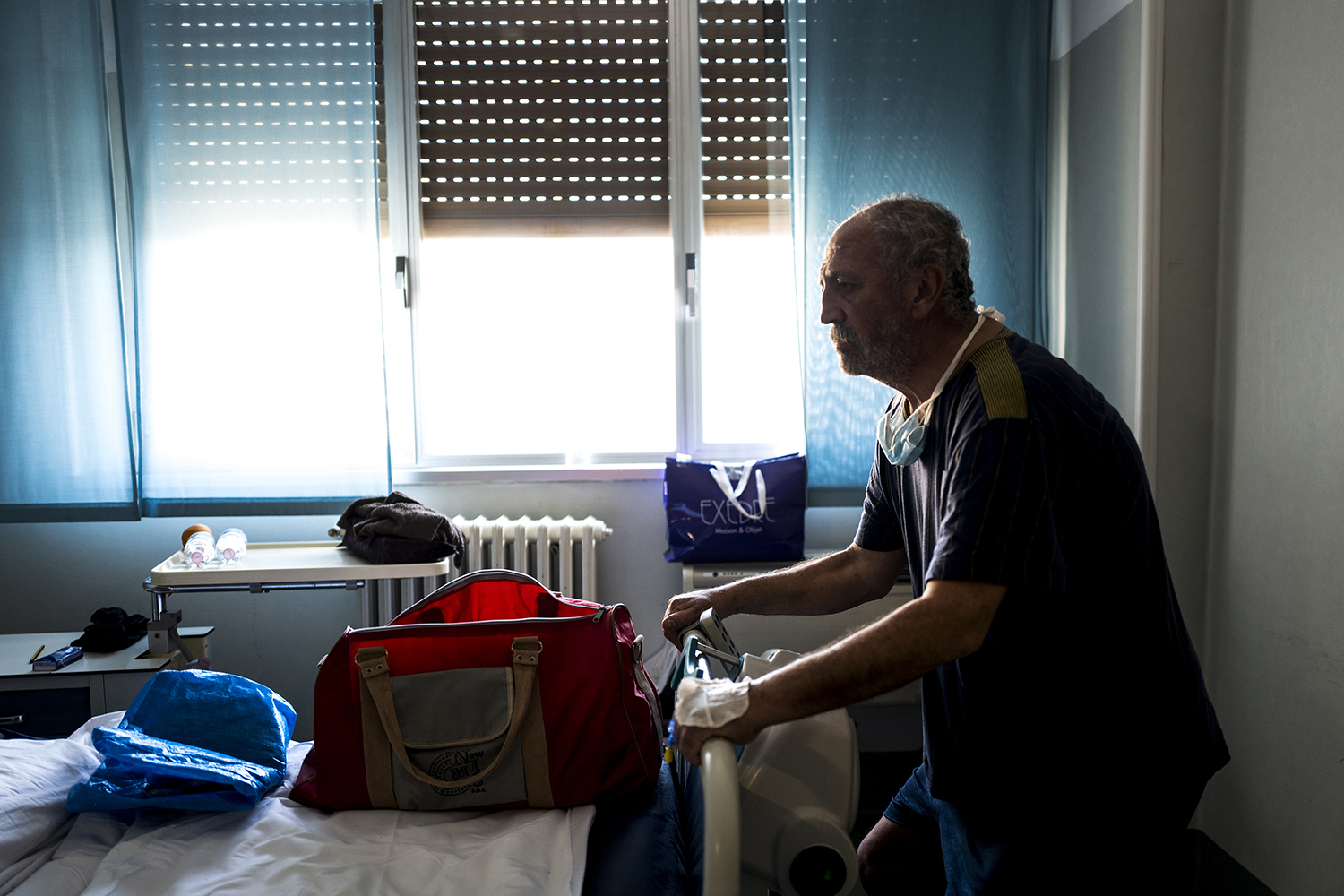 Maurizio Melchiorre trains to regain his strength as he prepares to return home after 33 days at Santo Spirito Hospital on April 27. Melchiorre had to be intubated twice because his lungs were not able to ventilate on their own.

“While I was sleeping deeply, waiting for my lungs to win their battle, I had the sensation that I could open my eyes and see everything around me,” said Maurizio Melchiorre, 62. “I saw large beams of very intense light, with different diameters and consistency. Rays that came from all sides.” He willed himself to hold on, he said. Hospitalized on March 24 and intubated twice during his stay, Melchiorre was discharged on April 27, weighing 50 pounds less than when he was put under. His wife and daughter welcomed him home with cake and balloons. Both had recovered from mild cases of the coronavirus. Melchiorre’s daughter, Paola, graduated from university online during the lockdown while he was intubated—a greater satisfaction than his own recovery, he said. 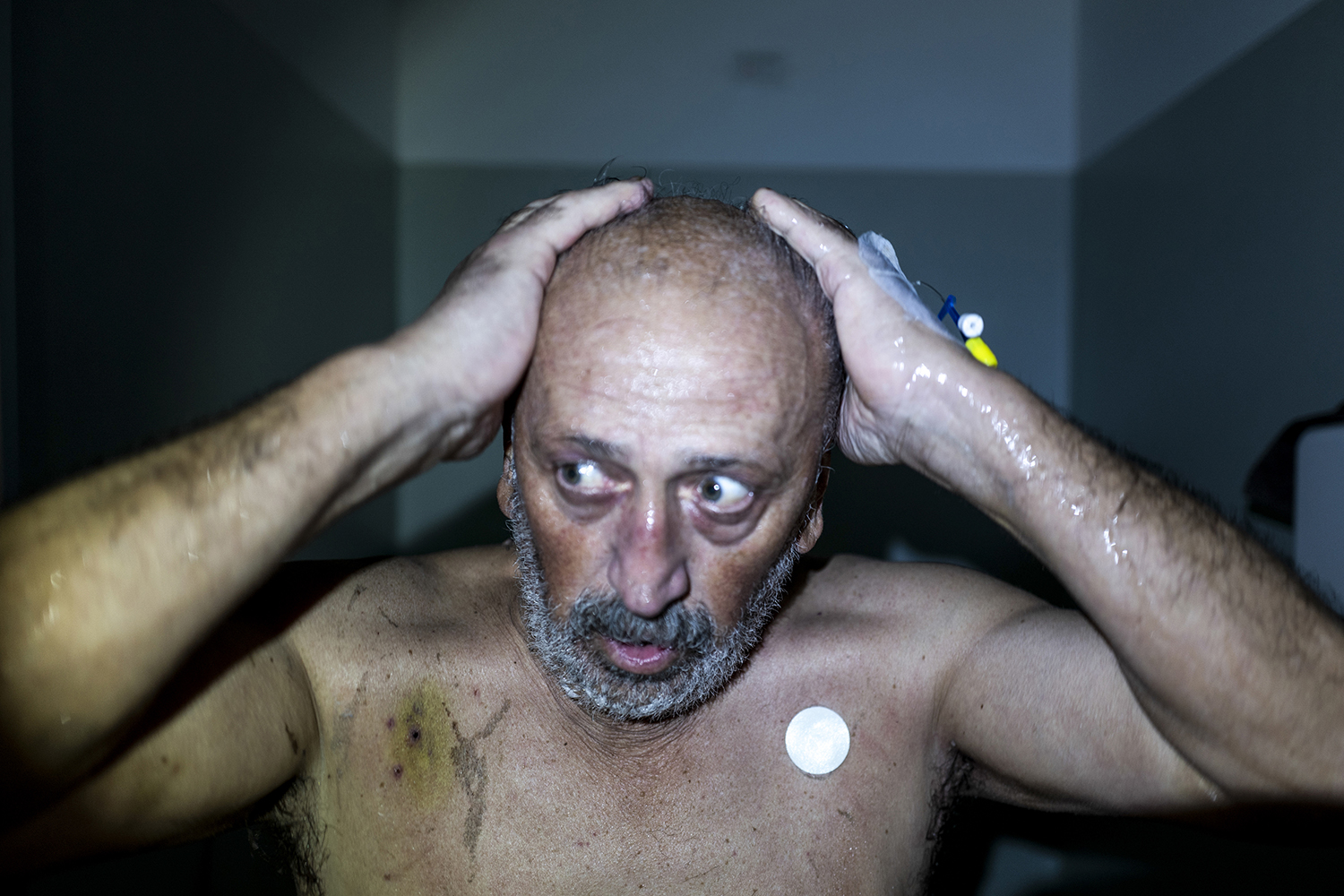 Melchiorre washes himself before getting ready to return home on April 27. 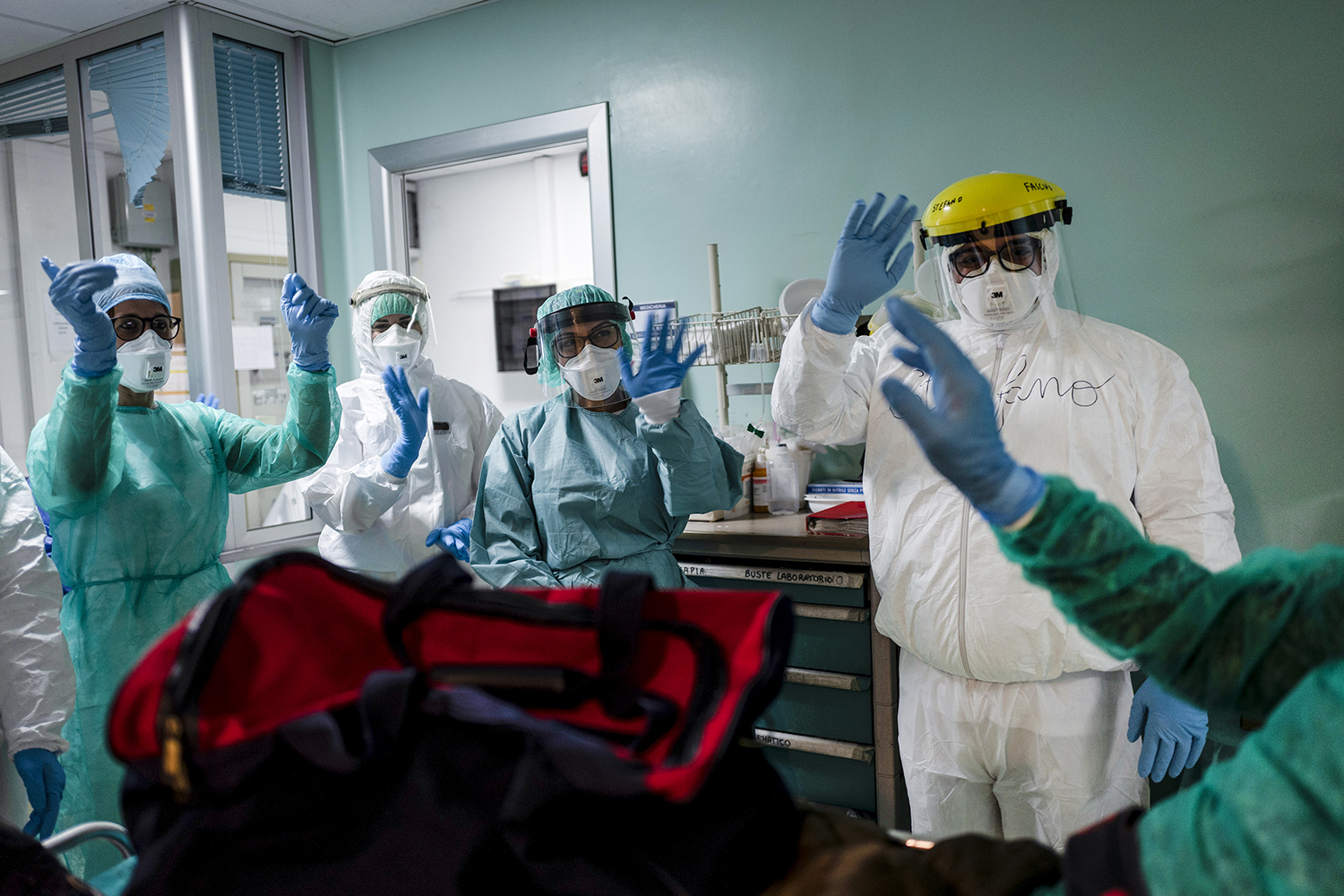 D’Agostino waves to medical staff in the general medicine unit as he prepares to leave Santo Spirito Hospital on April 27. 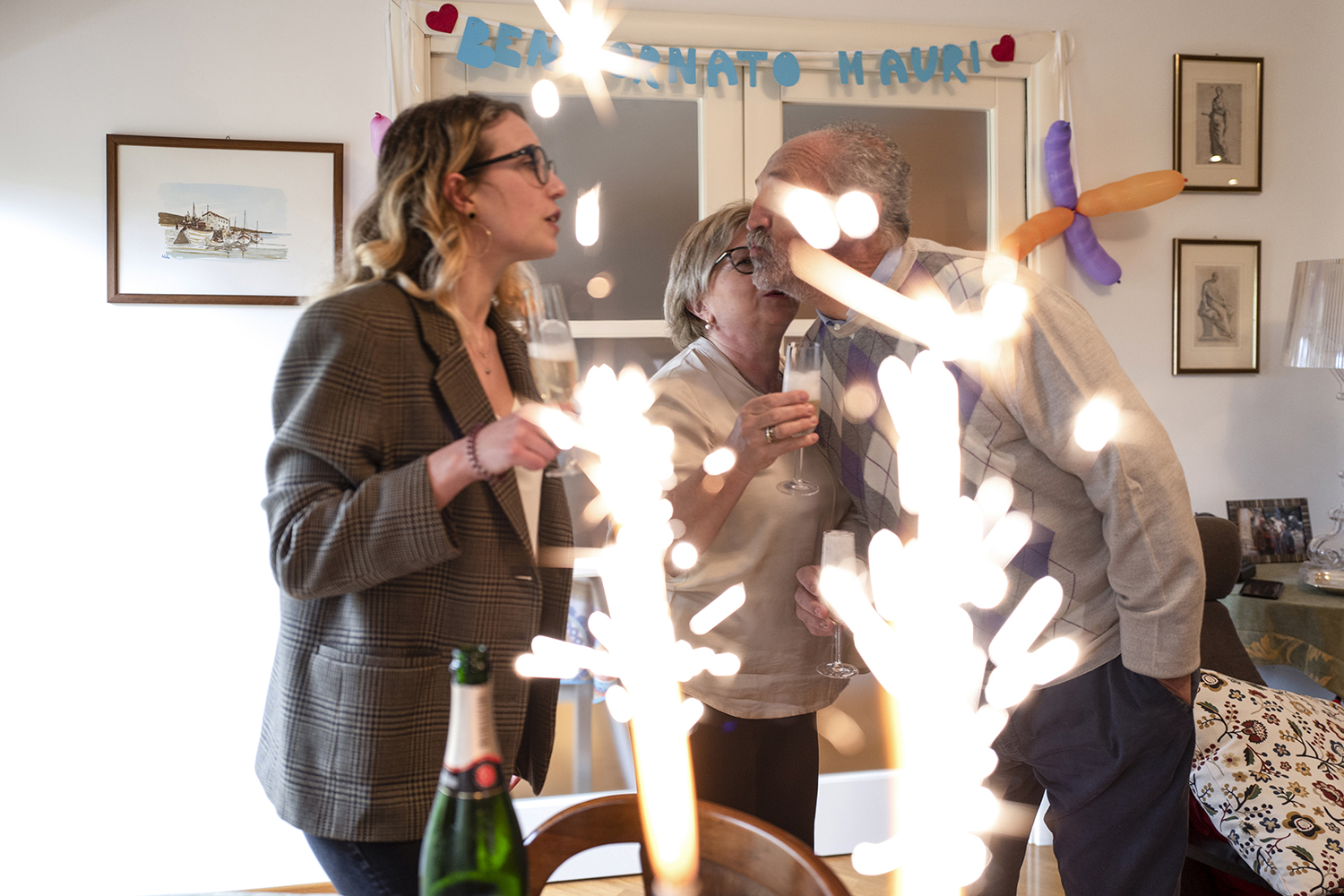 Melchiorre celebrates with his wife, Milena, and daughter, Paola, during a welcome party at their home in Pescara on April 28.

Even as the recovered patients return to their lives, restrictions in Italy remain. Once discharged, patients are allowed to go for a walk only with a face mask and must undergo physical therapy and personalized treatments because they have lost weight and muscle mass. A full recovery in most cases takes several months.

From March 12, Emanuela de Nicolo, 44, was intubated for three interminable weeks. During the medical sedation, she said she saw her own funeral. When she woke up, she was lost. She heard voices but didn’t understand where she was. “The first thing I said when the tubes were taken out was, ‘Good morning, now I can talk—unfortunately for all of you!’ There were those who laughed, those who cried, those who applauded.” 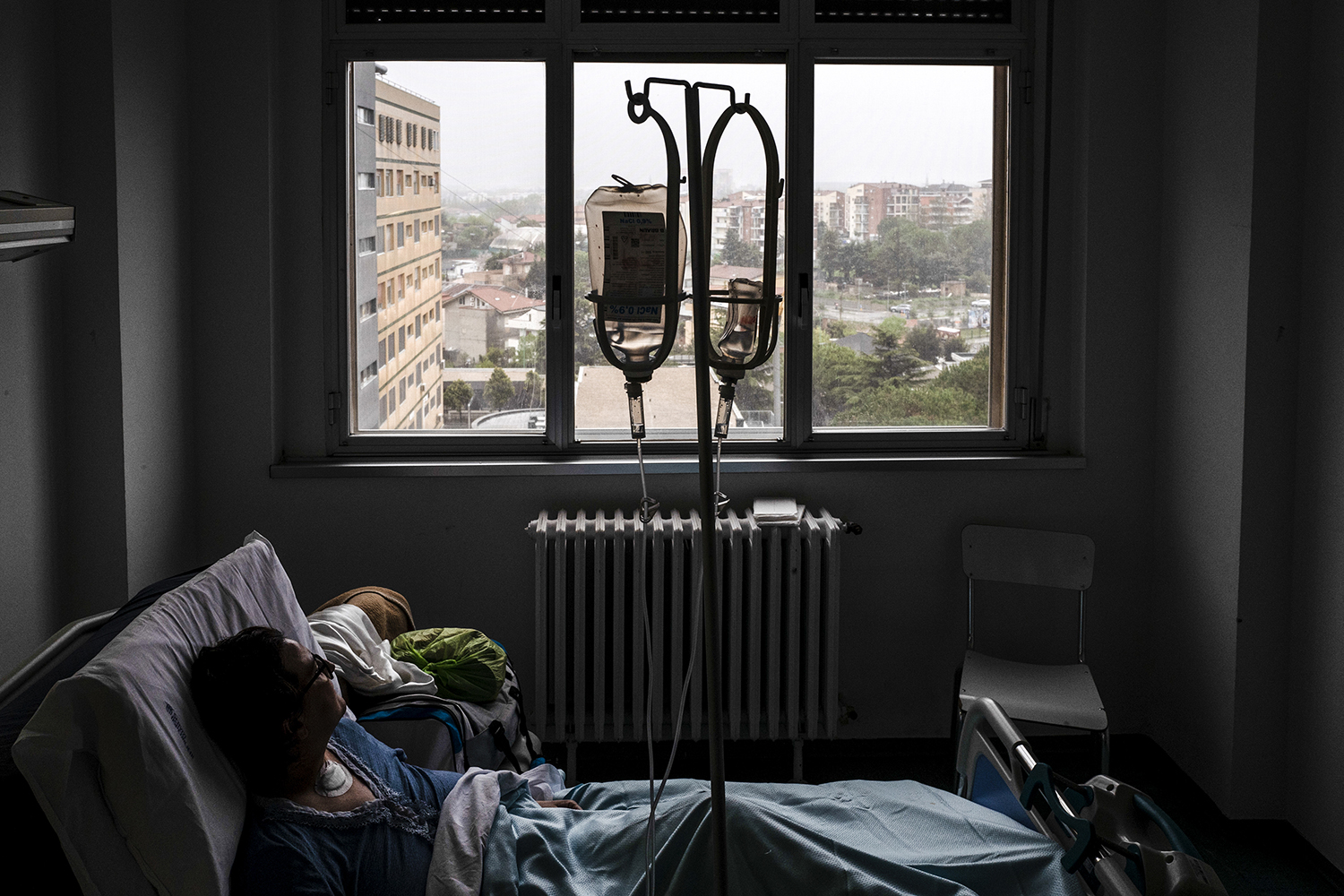 Emanuela De Nicolo rests in her room at Santo Spirito Hospital on April 21 as she waits for a full recovery before being allowed to return home. 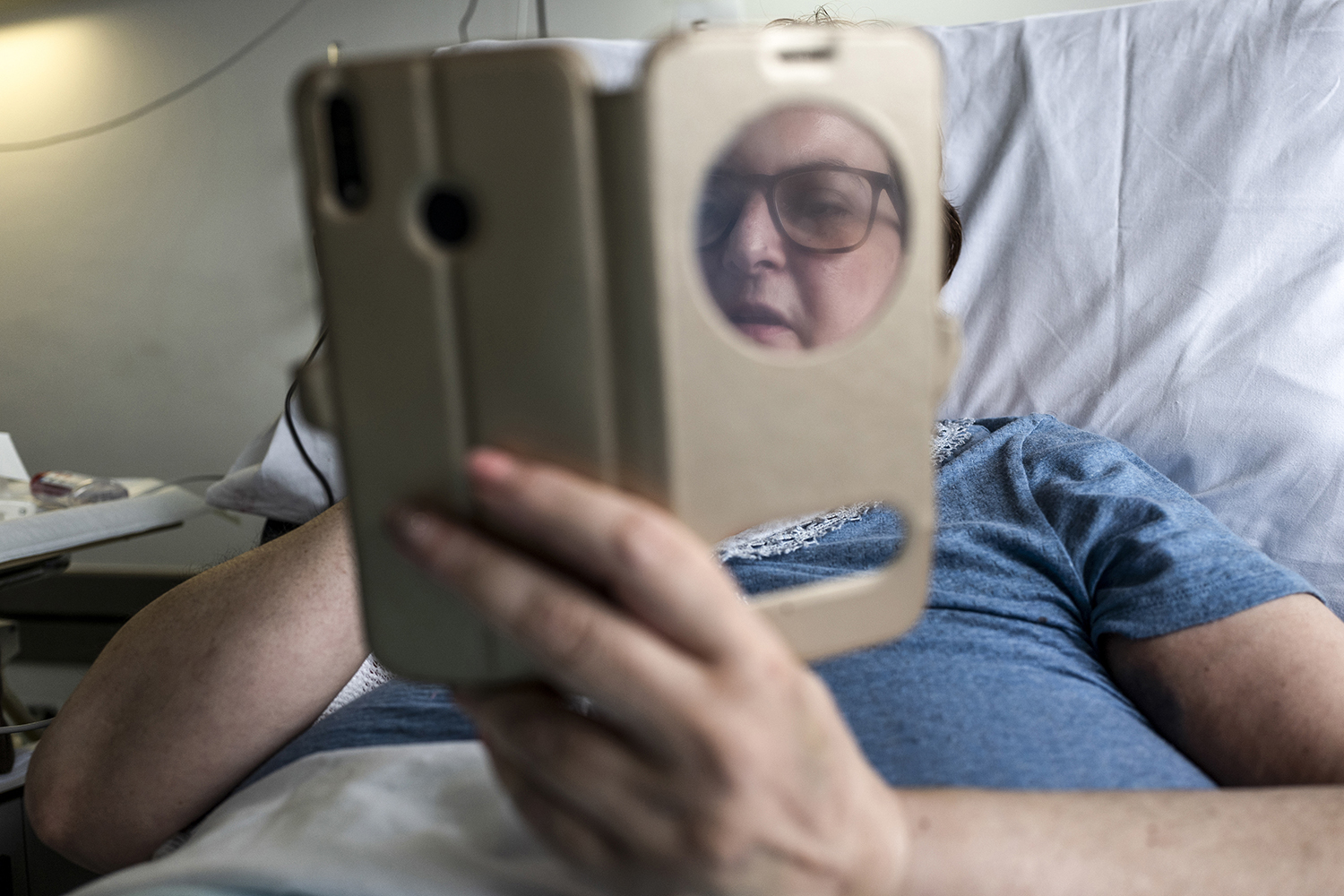 De Nicolo talks by video with her partner, Antonio, as she recovers at the hospital on April 21. 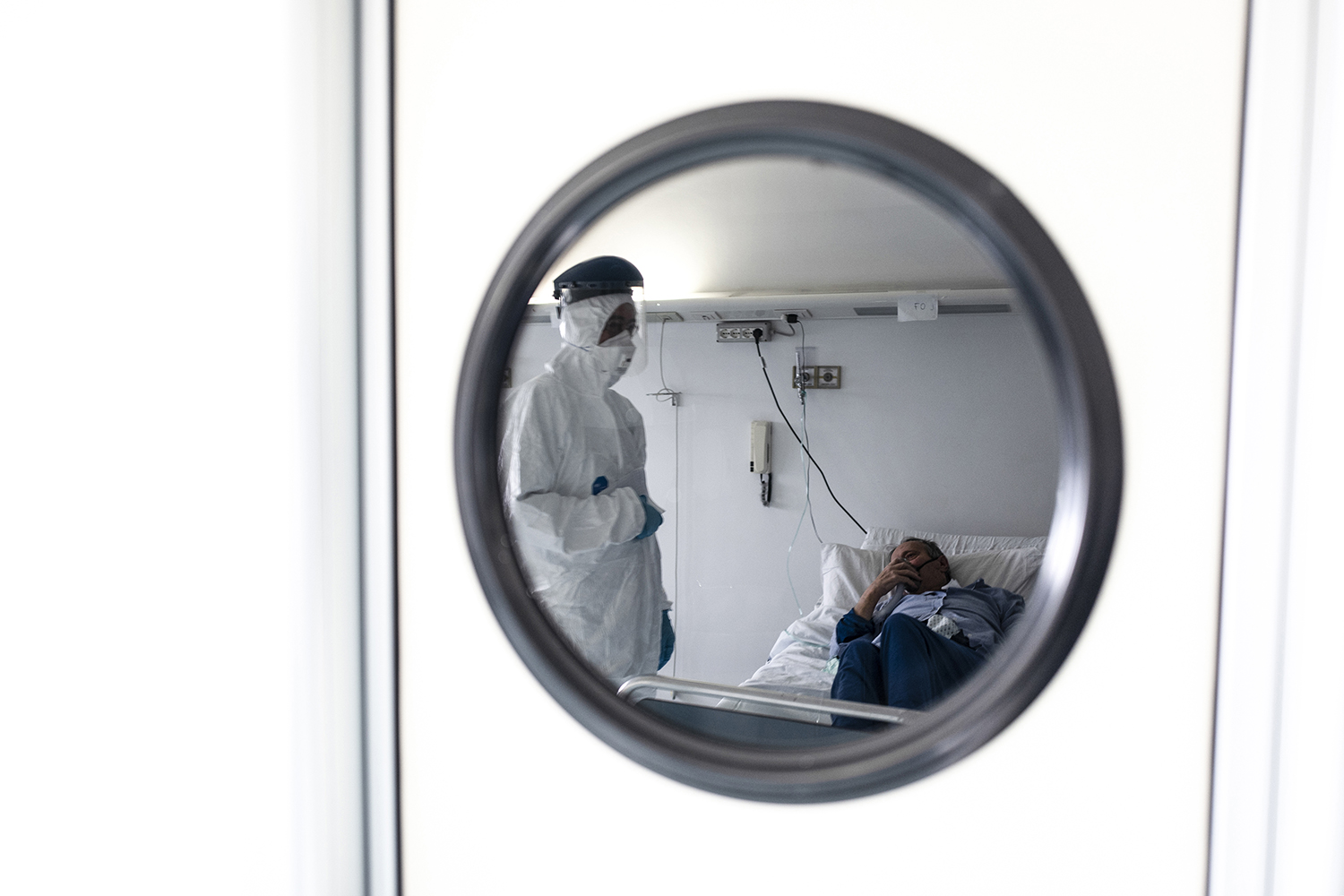 De Nicolo was discharged on May 5 after overcoming the worst of the disease and testing negative for COVID-19 twice. Despite her face mask, her two English pointers recognized her immediately when she returned home. “I haven’t seen my puppies for almost two months,” she said. “I have a very strong bond with them. They are my kindred spirits, and they’ve healed me from everything.”

“Make me fall asleep, but wake me up,” de Nicolo said to Frattari before she was intubated. “I promise,” the doctor replied. 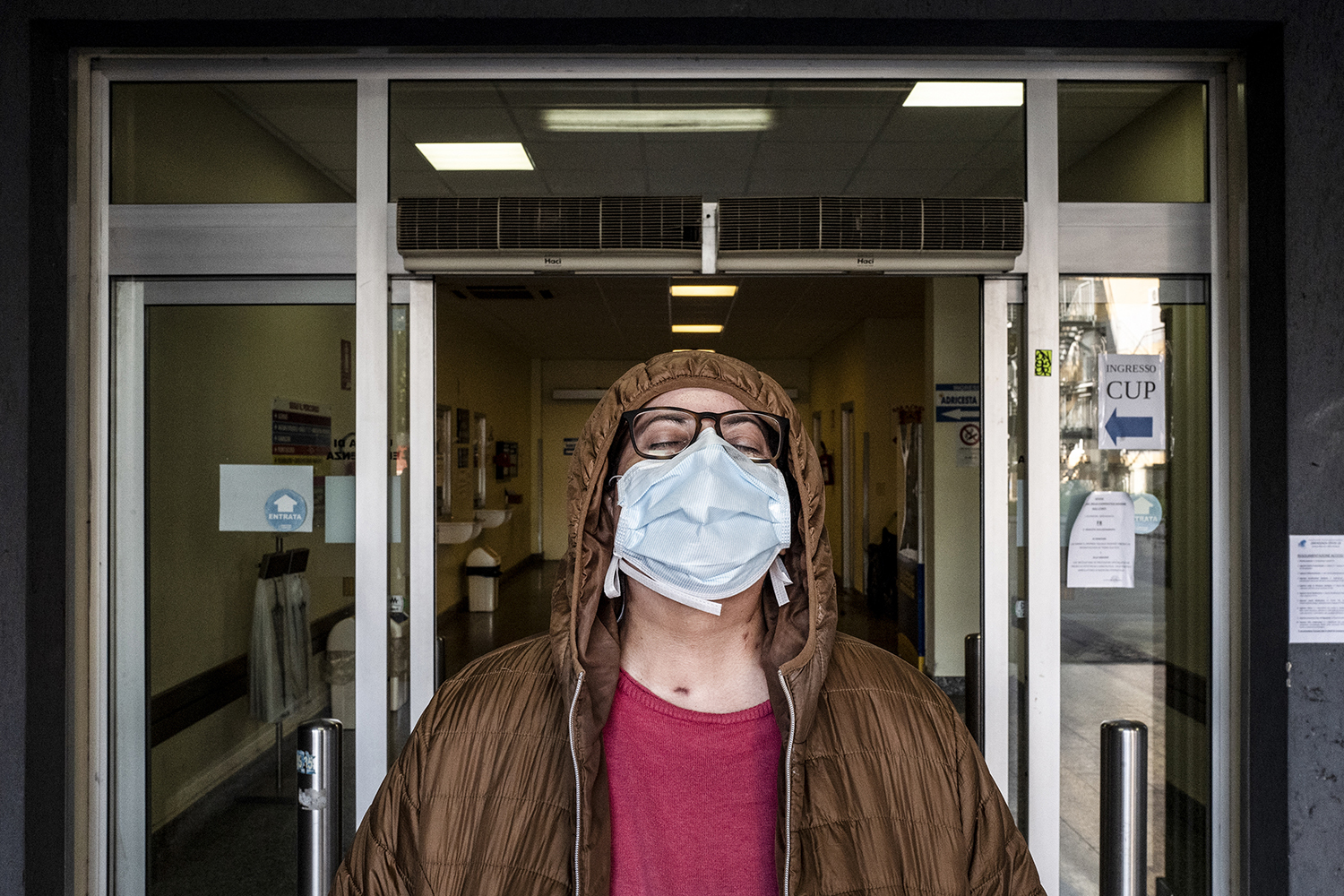 De Nicolo walks out of Santo Spirito Hospital on May 5 on her way home after 58 days in the hospital.

The EU Is Abandoning Italy in Its Hour of Need

In a shameful abdication of responsibility, fellow countries in the European Union have failed to give medical assistance and supplies to Italy during an outbreak. China is filling the void.

Coronavirus Disproportionately Affects Health Workers. Here Are the Countries Most at Risk.

Jenny Pacini is a freelance journalist based in Abruzzo, Italy. Stefano Schirato is a freelance photographer based in Italy. He focuses on social issues with nongovernmental organizations and has been published in the New York Times, CNN, Al Jazeera, and Vanity Fair Italy among others.