When the coronavirus arrived, aboriginal communities sprang into action long before the government. But in light of a neglected health system, can their tenuous successes be maintained?

When the H1N1 pandemic arrived in Australia in 2009, it took a disproportionately heavy toll on indigenous people, who ultimately suffered a death rate around six times higher than the general population. Aboriginal and Torres Strait Islander peoples, who at the time made up just 2.5 percent of the population, accounted for 11 percent of the 37,683 cases recorded across the country. They also accounted for 16 percent of hospitalizations and nearly 10 percent of admissions to intensive care units.

So when word of a new virus began to circulate earlier this year, James Ward, a leading indigenous public health expert based at the University of Queensland’s Poche Centre for Indigenous Health, which brings together indigenous community organizations and health providers to improve health outcomes for aboriginal and Torres Strait Islander people, knew Australia’s response would have to be drastically different if it were to avert another catastrophe. It would have to be swift, and it would have to closely involve the community. In the face of decades of government neglect, poor policy, and a lack of funding, the aboriginal community-controlled health sector sprang into action—creating a tailored infectious disease response to the novel coronavirus.

Aboriginal community-controlled health services across the country ensured that clear health messages reached communities in their languages. Some remote communities, without any word from the government, quietly shut their borders. First it was the Anangu Pitjantjatjara Yankunytjatjara Lands in remote South Australia, followed by some Cape York communities in Far North Queensland. In doing so, these communities exercised sovereignty that they had rarely evoked but never ceded.

The federal government, meanwhile, set up a national aboriginal and Torres Strait Islander advisory group on COVID-19 to fast-track an emergency response plan for aboriginal communities. The group—which Ward advises—is made up of leaders from the aboriginal community-controlled health sector, state and territory health and medical officials, aboriginal communicable disease experts, the Australian Indigenous Doctors’ Association, and the National Indigenous Australians Agency. The group works on principles of shared decision-making, power-sharing, self-determination, and empowerment, among others.

By the time the federal government announced travel restrictions to indigenous areas on March 26, local efforts to protect the communities were well underway. Many aboriginals living in cities had earlier returned to their native lands to isolate. Others have opted to camp out in the bush in order to protect the elders, the most cherished members of society who preserve traditional knowledge and play a vital role in tackling community issues.

Thus far, the aboriginal community response, coordinated with the national government, appears to have worked. Since the virus arrived on Australia’s shores in late January, just 44 of the nation’s 7,000 cases have been confirmed among Australia’s indigenous population (who as of 2016 make up 3.3 percent of the country’s population). There have been zero confirmed cases in remote aboriginal communities.

But it is far from time to celebrate. Even as indigenous communities have successfully staved off the worst of the coronavirus, the pandemic has exposed Australia’s appalling inability to improve indigenous health outcomes more broadly. While Australia is popularly referred to as a lucky country, it is glaringly obvious that it is only lucky for the privileged. 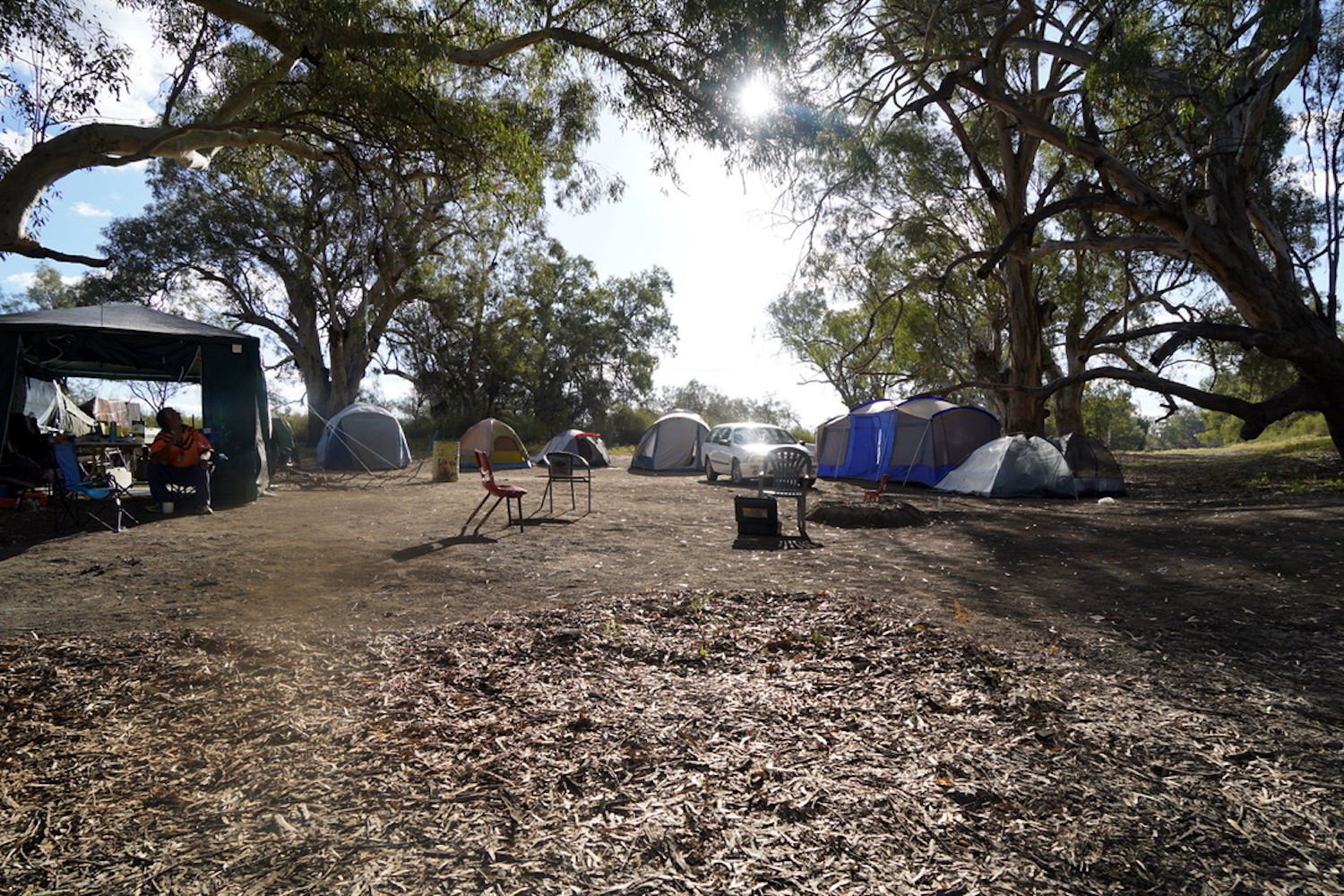 Due to overcrowding, some families in the remote New South Wales town of Wilcannia in Australia set up a tent village by the Darling River in April to protect themselves from the coronavirus.Sophie Cousins for Foreign Policy

The social and economic impact of invasion and control of indigenous Australians has accumulated across generations. After huge swaths of one of the world’s oldest populations were decimated by the arrival of white settlers in 1788, the indigenous population continued to face inordinate disadvantage. Decades of neglect, amplified by policies that systematically disadvantaged indigenous Australians, have left the population at huge disadvantage, characterized by economic deprivation, social marginalization, inadequate housing, and high unemployment.

Australia also remains the only developed country in the world to have endemic levels of trachoma, the world’s leading infectious cause of blindness. While the disease disappeared from most of Australia more than 100 years ago, it persists in remote aboriginal communities that still lack safe washing facilities and that have poor and chronically overcrowded housing.

Such poor living standards mean that the best defenses against the coronavirus—social distancing and hand-washing—are simply impossible in some communities. The government has conceded that social distancing in indigenous communities is impossible, instead flagging the idea of providing tents to overcrowded homes or having people set up camp on the outskirts of communities as alternatives.

The Pandemic Is Slicing Away Indigenous Sovereignty in Canada

The Wet’suwet’en ended pipeline protests for safety’s sake, but the police aren’t following the rules.

The government has gone to great lengths to keep asylum-seekers from its shores. Now it might have to accept some of them after all.

Comorbidities including diabetes and heart disease are high-risk factors for complications from COVID-19. Such chronic diseases are rife among indigenous Australians. In fact, chronic illnesses account for two-thirds of the total burden of disease in that population. While chronic disease is also widespread among the general population, long-standing inequity issues related to health care quality and access, as well as pervasive social and economic disadvantage, fuel poorer health outcomes among Australia’s indigenous population.

“It makes you sick,” said Bob Davis, the chief executive officer of Maari Ma Health, an aboriginal community-controlled health organization in the Far West region of New South Wales, when asked what could happen if the coronavirus reached an indigenous community.

He’s particularly concerned about Wilcannia, a remote community of 750 people, about two-thirds of whom are aboriginal. Wilcannia is located on the Darling River, an 11-hour drive inland from the wealthy harbor city of Sydney. In the local Barkindji language, “Barka” means river; the aboriginal people of Wilcannia are “people of the river.”

After self-isolating and taking a coronavirus test, I recently visited Wilcannia to witness how the community members were doing their best to protect themselves from the virus.

There I met Owen Whyman, a Barkindji man who lives in a small three-bedroom home with six children and his partner. At any given time, he can have up to 35 people living in his home, particularly when the whole community comes together after a death.

Whyman is frank in his assessment of what would happen if the virus were to reach a community like Wilcannia. “It sounds bad, but in this remote community, if COVID-19 hit, people would drop like flies,” he said. “The sad thing about it is that social distancing is impossible.”

And in spite of the efforts made by the national-level advisory group on the coronavirus in indigenous communities, Owen said aboriginal people have been excluded from the pandemic response in Wilcannia. For weeks, the community fought for it to be closed off to outsiders to no response by the state or federal government.

“Each community has different needs. People should have a voice to say what works and what doesn’t. The government should have come out to speak to the community.”

But as Australia continues to make impressive progress against COVID-19, recording only a handful of cases across the country every day, aboriginal experts are warning that the pandemic is far from over.

“We’re only a small way into this pandemic. We don’t know what will happen when border restrictions and all our social distancing measures are lifted,” Ward said.

“Until there’s a vaccine or treatment, our population will remain vulnerable. We’re in this for the long run.”

This story was funded by the National Geographic Society.

Sophie Cousins is a health journalist based in South Asia. She is currently writing a book on women’s health in the region. Twitter: @SophCousins
View
Comments
Tags: Australia, coronavirus, indigenous peoples, Public Health

The Pandemic Is Slicing Away Indigenous Sovereignty in Canada

The Wet’suwet’en ended pipeline protests for safety’s sake, but the police aren’t following the rules.

The government has gone to great lengths to keep asylum-seekers from its shores. Now it might have to accept some of them after all.