Food Price Spikes and Social Unrest: The Dark Side of the Fed’s Crisis-Fighting

This wave of social upheaval became known as the Arab Spring in Western media outlets, but activists in the region described it as the Hunger Revolution, an apt name considering that unrest was hardly limited to the Arab world. Nor were these domestic uprisings contained within their borders. The ensuing civil conflicts in Libya and Syria, in particular, became internationalized, and the 2015 refugee shock from the latter conflict contributed to populist-nationalist political movements, first in Europe and then around the world.

The coronavirus crisis has already prompted worry regarding access to affordable food, particularly in developing countries. Earlier this month, President of the U.N. General Assembly Tijjani Muhammad-Bande warned of a pandemic-induced food crisis, while the U.N.’s World Food Program now expects a doubling of acute hunger relative to the pre-crisis baseline. While there have been strong harvests in recent periods, public officials worry about fragility in global supply chains as well as hoarding and food protectionism. As hunger rises, so does the potential for widespread episodes of contentious politics, including protests, mob activity, and both violent and nonviolent mobilizations against governments.

Many of these historical episodes involved natural processes, such as drought, that introduced (or exacerbated) Malthusian dynamics—in which the availability of food threatens to be exhausted by the population’s demand for it—particularly when combined with rapid population increases in urban centers. But another factor has had a dramatic impact on global food prices, and thus political stability: changes within the international money system.

Food is expansively traded cross-nationally, which generates a world price that is typically indexed in U.S. dollars (still the currency that is most used internationally, by far). Changes to the value of the greenback have the potential to move a wide range of prices around the world, including the price of food. And the value of the U.S. dollar is most influenced by the actions of the Federal Reserve.

The Federal Reserve is mandated by the United States government to achieve full employment in the U.S. economy, with low and stable inflation, while maintaining financial stability. The Fed uses a range of policy tools—especially interest rate adjustments and asset purchasing (i.e., “quantitative easing”) programs—to expand (or contract) the supply of dollars in pursuit of these goals. Changes to money supply then have an impact on prices and, because the dollar is the most internationalized currency, these price changes are felt globally.

Commodities prices are particularly susceptible to U.S. monetary policy. While other factors—including the stock of inventories, the functioning of distribution networks, and the level of global demand—also play a very important role, expansion of the U.S. dollar supply typically results in commodity price increases, all else equal. And changes to the price of food can have a powerful impact on social stability around the world.

This was true during the global financial crisis that began in 2007. As the U.S. economy began slowing, then started crashing, the Federal Reserve slashed interest rates from 5.25 percent to zero in a little over a year. Taking the main policy rate to zero was unprecedented, but it proved insufficient to stabilize the U.S. economy when the financial sector began to collapse. Beginning in the fall of 2008, the Fed embarked on a series of quantitative easing operations, in which they exchanged dollars for other financial assets—mostly government bonds and mortgage-backed securities—to stabilize financial markets and stimulate an economic rebound. From 2008 to 2014, the total assets held by the Fed grew from less than $1 trillion to about $4.5 trillion. This, too, was unprecedented. The cumulative effect of these actions was to increase the dollar money supply by about 50 percent from 2008 to 2014.

The extraordinary actions coincided with sharp increases in food prices, as shown in the figure below, which charts monthly percent changes in U.S. dollar supply (using the standard M2 measure, which sums cash along with bank and money market deposits) alongside monthly changes in global food prices (from the U.N.’s Food and Agriculture Organization). Each phase of the 2007-2011 food shocks was preceded by a monetary policy change that impacted dollar supply. Although it would be wrong to blame the crisis solely on Fed policy—other factors such as rising oil prices had an impact (although these are also related to monetary policy changes)—extraordinary monetary policymaking at the core of the international money system produced sharp commodities price movements.

Food Shocks and the Dollar Supply

The supply of U.S. currency alongside the Food Price Index, which measures the monthly change in global prices of a basket of commodities

Food price rises, in turn, had extraordinary political effects: As the figure below shows, the number of food riots globally (based on Marc Bellemare’s data) jumped a whopping 250 percent above their average over the 2005-2011 period in response to these spikes in food prices, and the number of ongoing civil disobedience campaigns (based on Nonviolent and Violent Campaigns and Outcomes 3.0 data) rose from 13 in January 2010 to 28 in December 2011. These mobilization events generated protracted social conflicts in Libya, Syria, and Yemen, brought to power a new autocratic regime in Egypt, and contributed to the rise of the Islamic State.

We may be living through another such period. The coronavirus pandemic has generated another serious economic crisis, and since mid-March the Federal Reserve has been engaged in expansionary monetary policies that are unique even by its own recent history. After a brief and modest increase beginning in 2016, policy interest rates are back down to zero. More importantly, the Fed’s aggressive asset purchasing is on pace to dwarf the quantitative easing programs of 2008-2014: The central bank’s total assets have increased from $4.2 trillion at the end of February to nearly $7 trillion by the end of April.

Some food prices are already on the rise. As the figure above shows, meat prices have already reached their second all-time high, while supply is dwindling. Even more important, however, is the price of cereals (wheat, maize, rice), which constitute the key staple in developing states and are the greatest contributors to caloric intake. The 2007-2008 and 2010-2011 protests were closely related to sharp changes in the price of cereals. The price of rice recently hit a multiyear high, although other cereals have been less volatile (possibly because supplies remain high). Fed policies may have the largest effect on American-grown food products, as the United States is the largest exporter of maize, second-largest exporter of wheat, and second-largest exporter of soybeans.

These monetary actions—particularly large-scale asset purchases, which are being called “quantitative easing infinity”—may be economically necessary to stabilize the U.S. (and global) economy against rapidly falling demand. But the potential for even more expansive monetary interventions to destabilize food prices—which had finally normalized over the past four years after a decade of extreme volatility—is high. The political ramifications of these price movements could be even more significant. Moreover, there may be a looming demand shock, as societies begin to reopen from coronavirus lockdowns and people return to restaurants in the coming months, thus contributing to rising prices.

Which countries are most likely to be at risk? The heat map below plots the most recent iteration of the Global Food Security Index, which combines food affordability, availability, and quality into a single measure of security. (Higher numbers indicate greater security.) Data is not fully available for all countries, but in general missing data on these dimensions should not be taken as a sign that all is well. What this indicates is that the list of least food-secure countries is similar today to those in the 2000s: countries in sub-Saharan Africa and the Middle East and North Africa in particular, but also parts of Central and South Asia, Venezuela, and Central America. 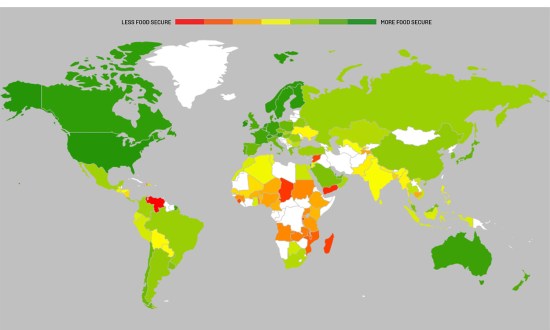 This outcome ultimately stems from the fact that arguably the most powerful global economic actor, the Federal Reserve, ultimately possesses a domestic policy mandate while its actions have global effects. Developing countries have long channeled their demands for commodities price stabilization through international institutions, and the same is true today: The United Nations called for a $2.5 trillion financial support fund for developing countries, and the U.N.’s Muhammad-Bande has argued that “International cooperation and coordination are critical to promoting stability in food markets and preventing sudden price shocks.”

But these pleas have been met with near-silence by national governments. Internationalism is in short supply today, as the United Stations disdains multilateralism, the European Union continues to dither, and China is unwilling to pay the cost of global public goods provision. Yet some combination of these efforts—in addition to the mobilization of international financial institutions (the World Bank and IMF) on generous terms—will likely be necessary to prevent the food shocks from creating widespread social upheaval. The Federal Reserve is the actor with the longest global reach and fewest veto points, and its emergency stabilization programs could be used to support bonds issues by the U.S. Treasury that can, in turn, provide finance for international institutions and foreign governments to insulate global markets from sharp food price increases. Of course, this would require the Trump administration to take much more interest in global affairs than it has up to now.

The global political economy is interdependent in complex ways. Actions taken at the core of global networks have systemwide impacts. The monetary policies of the U.S. Federal Reserve impact food prices globally, causing sharp increases in the price of key staples. With high food prices come protests and riots, civil disobedience and mass mobilization, and—at least in some contexts—state collapse and civil war.

A decade after the most recent wave of food riots, its impacts are still noticeable: Syria remains in conflict, while the economic and political impact of Syrian refugee flows are being felt in Lebanon (where mobilizations are already on the rise), Turkey, Europe, and elsewhere. This, in turn, provides populist-nationalist politicians with an effective item for their propaganda, which they use to consolidate power and reduce democracy. Without an understanding of this complexity, a similar scenario could be repeated in coming days.

How to Stop a Looming Food Crisis

Trade restrictions are breaking supply chains, and coronavirus lockdowns are preventing laborers from working on farms. Countries need to step back and stop panicking.

Policies imposed in rich countries to fight the coronavirus could have adverse effects in low-income nations—potentially endangering more lives than they save.

Flying Blind With the Fed

The Fed chairman confirms that uncertainty over trade is slowing the global economy and no one knows quite what to do about it.

Ore Koren is a political scientist at Indiana University Bloomington.

How to Stop a Looming Food Crisis

Trade restrictions are breaking supply chains, and coronavirus lockdowns are preventing laborers from working on farms. Countries need to step back and stop panicking.

Policies imposed in rich countries to fight the coronavirus could have adverse effects in low-income nations—potentially endangering more lives than they save.

Flying Blind With the Fed

The Fed chairman confirms that uncertainty over trade is slowing the global economy and no one knows quite what to do about it.

In Historic Deal With the UAE, Israel Is the Biggest Winner