Is This the End of Hong Kong As We Know It?

China is set to bypass Hong Kong’s legislature to enact new national security laws in the latest blow to the city’s autonomous status and a signal that 23 years of Beijing’s “one country, two systems” approach to the financial hub may be coming to an end.

Speaking to the annual gathering of the National People’s Congress in Beijing on Friday, Chinese Premier Li Keqiang said China would establish a “sound” legal system to safeguard national security for both Hong Kong and Macau. The new law would ban “secessionist and subversive activity as well as foreign interference and terrorism” in Hong Kong, according to the South China Morning Post.

“This move affirms that Hong Kong as we knew it is gone and rule of law is now rule by law,” China expert Bill Bishop wrote in his Sinocism newsletter.

Will the move spark more protests? “I think the provocation of last year’s protests has proved too much and Beijing wants to reassert its authority in Hong Kong forcefully and decisively,” Antony Dapiran, a writer and lawyer based in Hong Kong told Foreign Policy. (On April 22, Dapiran, writing in FP, warned that China may use the “global distraction” of the coronavirus to crack down on Hong Kong.)

Hong Kongers have fiercely opposed national security laws in the past, viewing them as an attack on civil liberties. In 2003, half a million people protested against proposed national security legislation until the issue was dropped. As the demonstrations over the past year show, the citizenry has not become any more compliant than they were 17 years ago.

The move is likely to spur fresh protests in Hong Kong. Demonstrations have already been taking place in recent weeks in shopping malls across the city, leading to hundreds of arrests.

U.S. reacts with sanctions threat. The Wall Street Journal reports that U.S. Senators Chris Van Hollen and Pat Toomey will introduce a bill that would sanction Chinese officials involved in enforcing the new laws in Hong Kong. It would also sanction banks and businesses that work with entities involved in carrying out the law.

U.S. President Donald Trump was less specific on what action, if any, the White House would take. “If it happens, we’ll address that issue very strongly,” he told reporters on Thursday.

Will QE Cause More Food Volatility?

Earlier this week in Foreign Policy, Ore Koren and W. Kindred Winecoff, researchers at Indiana University warned that the quantitative easing the U.S. Federal Reserve is pursuing to stabilize the U.S. economy may have an unintended consequence: Driving up commodity prices—including food prices—and setting the stage for further global unrest. The chart below highlights the relationship between food riots and food prices—with spikes around the last financial crisis. For a deeper look at the Fed’s effect on food, read Koren and Kindred Winecoff’s full analysis. 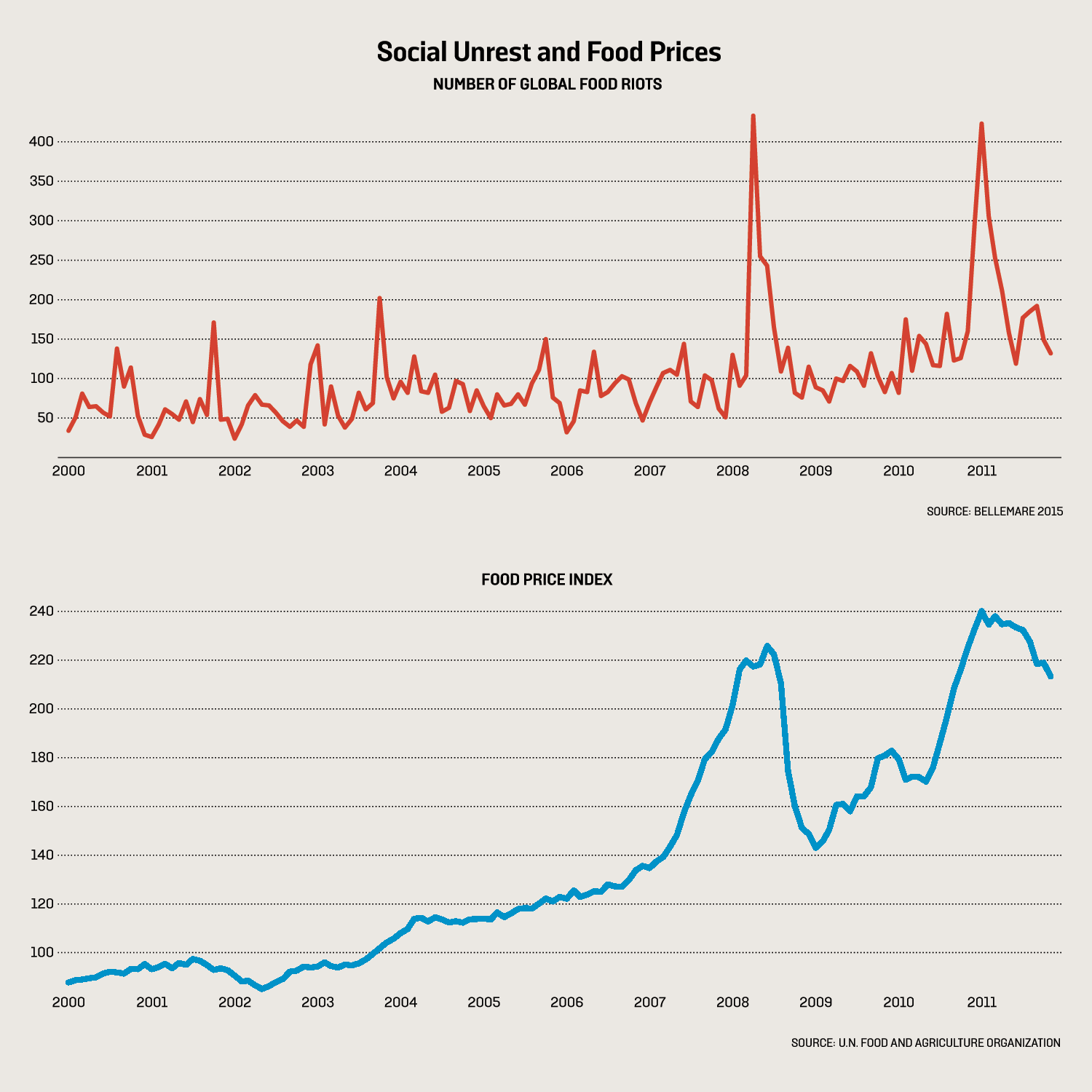 U.S. to leave Open Skies Treaty. President Trump will withdraw the United States from the Open Skies Treaty, an agreement that allows countries to fly surveillance aircraft over each other’s territory as a confidence-building measure. U.S. officials cited Russia’s apparent noncompliance with the treaty as a reason to pull out. Russia has blocked surveillance flights over some of its territory, including during military exercises.

Trump’s announcement sets a six-month clock until the U.S. formally leaves the treaty, and a reversal is still possible. “There’s a chance we may make a new agreement or do something to put that agreement back together,” Trump said. “I think what’s going to happen is we’re going to pull out and they’re going to come back and want to make a deal.”

Even if the United States leaves Open Skies, other countries won’t be completely blocked from viewing U.S. territory from above if they have the requisite technology: Satellites are not included in the treaty.

Chechen leader in hospital with possible coronavirus case. Chechen leader Ramzan Kadyrov has been admitted to hospital in Moscow with a suspected case of COVID-19. If his case is confirmed, he would join the many high-profile Russians to contract the disease: Kremlin spokesperson Dmitry Peskov was hospitalized last week due to the virus, and Russian Prime Minister Mikhail Mishustin returned to work on Tuesday after he recovered from the virus. Russia has the second highest number of coronavirus cases in the world, with roughly 317,000 cases

Cyclone Amphan death toll climbs. At least 82 people have died as a result of Cyclone Amphan, according to officials in India and Bangladesh. That number could grow, given that damage to electricity lines has hampered communications with hard-hit areas.

For more news and analysis on stories like this, sign up for South Asia Brief, delivered on Tuesdays.

Who gets a vaccine first? The United States has reportedly secured 300 million out of the first billion doses of a potential coronavirus vaccine being developed by University of Oxford scientists and drug firm AstraZeneca. The United States committed $1.2 billion toward speeding up the vaccine’s development, putting it in pole position, along with the United Kingdom, to receive the vaccine should trials prove successful. As a result of the investment, a large scale human trial involving 30,000 people in the United States will now be able to move forward.

Since the vaccine candidate is still in early-stage human trials it may yet prove ineffective, a fact the manufacturer is aware of. “AstraZeneca recognises that the vaccine may not work but is committed to progressing the clinical program with speed and scaling up manufacturing at risk,” the company said.

Brazil’s worsening coronavirus epidemic. Brazil recorded its highest daily coronavirus death toll for the second time this week, with 1,188 new deaths reported. The news comes as Brazilian President Jair Bolsonaro mulls an aid package worth $10 billion to help cities and states deal with the fallout from the coronavirus. Bolsonaro has yet to sign off on the package as he pushes governors to support a public sector pay freeze in return for the aid.

A court in the Netherlands has ruled that a woman must delete pictures of her grandchildren from social media in a landmark case. The case was brought after a dispute between the children’s mother and grandmother. The judge ruled that under Europe’s General Data Protection Regulation (GDPR) laws, the grandmother’s posts did not qualify as “purely personal” or “household” data since the content was displayed on Facebook and Pinterest. The grandmother must now remove the posts or be fined 50 euros ($55) per day that the posts remain up. If she posts any more photos, she will be fined a further 50 euros per day.

NEW FOR SUBSCRIBERS: Want to read more on this topic or region? Click + to receive email alerts when new stories are published on United States, China, India, Hong Kong