The problem is that, despite years of steadily increasing efforts under the Trump administration, the United States—both the public and private sectors—has yet to figure out how to redress the fundamental vulnerabilities in its critical materials supply chain, and America still seems years away from developing the full gamut of rare-earth mining, processing, and refining capabilities it needs if it seeks to wean itself off foreign suppliers.

The U.S. Defense Department, meanwhile, is trying to throw money at the problem, putting rare earths at the center of the annual defense acquisition bill three years in a row, with plans this year to massively increase existing Pentagon funding for rare-earth projects. All that comes after a drumbeat of Trump administration moves, from a 2017 executive order seeking to ensure supplies of critical minerals to a 2019 Commerce Department report suggesting ways to do so. 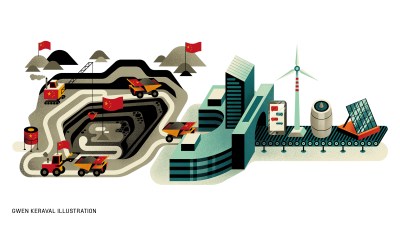 “It’s ripe for legislation,” said an advisor to Cruz, who says that kick-starting domestic demand for finished rare-earth products will percolate back up the supply chain and rejuvenate a U.S. industry that has basically evaporated since its world-leading days three decades ago.

The drive to decouple from China has been thrown into overdrive by the coronavirus pandemic and new calls from hawks in Washington to take a tougher approach to confronting Beijing’s rise as a global rival. Sen. Josh Hawley, a Missouri Republican, took to the Senate floor this week to rail against China’s economic imperialism and called for the United States to leave the World Trade Organization and create a brand-new global economic order.

Other lawmakers and Trump administration officials, starting with the president, are also increasingly leery of maintaining the kind of deep economic integration with China that has marked the last two decades.

“There’s this confluence of factors that really provided added momentum to the discussions on the Hill concerning security of supply [of rare earths],” said Jane Nakano, a scholar at the Center for Strategic and International Studies. “It went on before COVID, but certainly there’s added momentum because of COVID.”

Gaining independence on rare earths has been the subject of on-again, off-again debates in U.S. defense circles since 2010, when China, the world’s leading supplier, briefly halted rare-earth exports during a dispute with Japan. If there’s so much urgency about building a U.S. supply chain, it’s not to make the materials needed for the next generation of smartphones, electric car batteries, or wind turbines—though all those things need high-end rare-earth products.

Rather, the Pentagon’s front-line weapons are all heavily reliant on precision-crafted rare-earth products and materials whose manufacture now is largely in the hands of China. Each F-35 fighter, for instance, needs 920 pounds of rare earths; each Virginia-class nuclear submarine requires 9,200 pounds. Tomahawk missiles, guidance systems, and jet engines all need different combinations of alloys and specialized products using some of the 17 different rare-earth elements.

If lawmakers, the Pentagon, and the White House are all now taking the rare-earth challenge seriously, why do they seem to be making little progress in tackling the issue?

Part of the problem is that a lot of the efforts so far, both in private sector and those with government funding, have focused simply on getting more rare-earth ores out of the ground in the United States. There are new rare-earth mines in different stages of early development in Alaska, Wyoming, and Texas, in addition to expansion underway at the one existing mine at Mountain Pass, California.

Another potential factor is the growing realization that China can’t continue to dominate the rare-earth market in perpetuity. This is not because of any legislation coming out of Washington that outmaneuvers Beijing but simply because China is taking steps to limit its breakneck production of the minerals, the mining of which leads to massive environmental damage.

“China has in its campaign to dominate the world splurged all its rare earths at bargain basement prices and has now ended up as a net importer of heavy rare earths,” said Christopher Eccleston, a mining strategist at the London-based financial advisory firm Hallgarten & Company. “It’s really quite a turnaround.”

In a 2019 study, Hallgarten projected that China would mine less than 50 percent of the world’s rare earths, compared with about 75 percent today, by the mid-2020s as it tightens restrictions on extracting its diminishing supplies.

Still, the critical bottleneck for the United States, and especially the defense sector, isn’t access to rare-earth ores, which are available from many countries all over the world, including deposits in Vietnam, Brazil, India, Australia, Canada, and Greenland. Rather, it’s that the rest of the value chain—processing those ores, refining them into metals, and turning that metal into advanced products like permanent magnets—is dominated by China.

“People get caught up on the resource end, and they don’t realize that China owns the metals and will continue to own that space,” said James Kennedy, the founder of ThREE Consulting, a rare-earth consultancy focused on security implications.

Some of the latest initiatives do seek to address part of those vulnerabilities, though even those measures have been ill-starred. The Pentagon said last month it would provide funding to both the project at Mountain Pass and for Australian firm Lynas to build processing facilities. But now both those programs appear to be on hold: Reuters reported that the Pentagon is halting the funding of those rare earth projects pending further investigation. It’s not clear if the holdup is due to the realization that Mountain Pass has minority Chinese ownership (and a Chinese monopoly on the mine’s output) or if the retreat is due to the realization that neither U.S. project is rich in the particular kind of heavy rare earths the military needs.

So far, all the steps taken fall short of rebuilding the full, mine-to-magnet kind of value chain that would be needed to ensure U.S. self-reliance of the critical materials.

“In the end, it does not matter how many rare-earth mines the United States opens. It does not matter if they are upgraded to produce mixed or separated oxides,” Kennedy said. “Nothing matters until we figure out how to overcome China’s control over metal production.”

Some of the latest plans—like Cruz’s new bill—do try to nudge the development of more domestic capacity at the high end of the value chain, by incentivizing manufacturers to use magnets and other advanced products made in the United States. But using traditional tools like tax credits to fix a problem caused by China’s state-mandated dominance of an entire industry is likely doomed to fail, Kennedy said.

“Tax incentives are only good if you see profitability,” he said, a rare event in an industry plagued by high costs, razor-thin margins, and serial bankruptcies. U.S. lawmakers’ proposals, he said, have “a market solution for a non-market problem.”

That’s a point that Kennedy, Hammond, and many other rare-earth experts repeatedly make: Given China’s state-mandated dominance of the niche rare-earth industry, it basically controls pricing and ensures that normal economic rules don’t apply. That makes it hard to respond to China’s current dominance by turning to market-based solutions, like urging mining companies to pour hundreds of millions of dollars into big upfront investments that could be rendered uneconomical with a single decision in Beijing.

To make sure the United States can rebuild the full range of rare-earth capabilities—from mining to processing to making the advanced final products—Hammond and others think it’s time for the Trump administration to turn its penchant for state capitalism to one sector that could actually use it. That would entail bypassing the dicey market economics of rare-earth mining and processing altogether and doing something like creating a government entity that could just underwrite the entire process in the name of national security.

“This is a critical defense issue, like the shipyards in the Second World War,” Hammond said. “Rare earths lends itself to a state capitalist solution more than just about anything.”

Washington is pressing for a post-pandemic decoupling from China. But the last big economic split brought on two world wars and a depression. What’s in store this time?

I Was a Rare Earths Day Trader

How a naval confrontation in the South China Sea created a global investment bubble -- and cost me half my life savings.