With new prisoner releases, many hope peace talks will be back on the table.

KABUL—Naveed Mohammed, 14, doesn’t recall the rocket hitting his house or its explosion, but he remembers waking up covered in warm blood, his ears ringing, his legs hurting, two of his brothers lying by his side—covered in rubble, dead. Mohammed was the lucky one in the family. His mother’s injured right leg and arm had to be amputated—on the same day that his two brothers, a 6-year-old and a 16-year-old, were buried by their father.

The family’s house in Maidan Wardak was hit May 13 as Taliban and Afghan government soldiers battled each other with new ferocity in the already violent province. The rocket strike came a day after an attack on a Kabul maternity ward that killed 24 people—mostly women giving birth—and President Ashraf Ghani, in response, declared that security forces would be taking up an active defensive position against all militant groups again.

Now Mohammed’s grandfather, Mohammad Aziz, 70, is hoping against hope that the kind of horrific crossfire in which his family, like so many in Afghanistan, have been caught for so long will, at least, abate. On Sunday, less than two weeks after the rocket attack, the family woke up to a surprise cease-fire, announced for the three days of the Islamic Eid al-Fitr holiday, the festival marking the end of the fasting month of Ramadan. The cessation of violence, officially announced by the Taliban on Saturday night, was reciprocated by Ghani, who later announced that he would facilitate the release of 2,000 Taliban prisoners over the coming days. 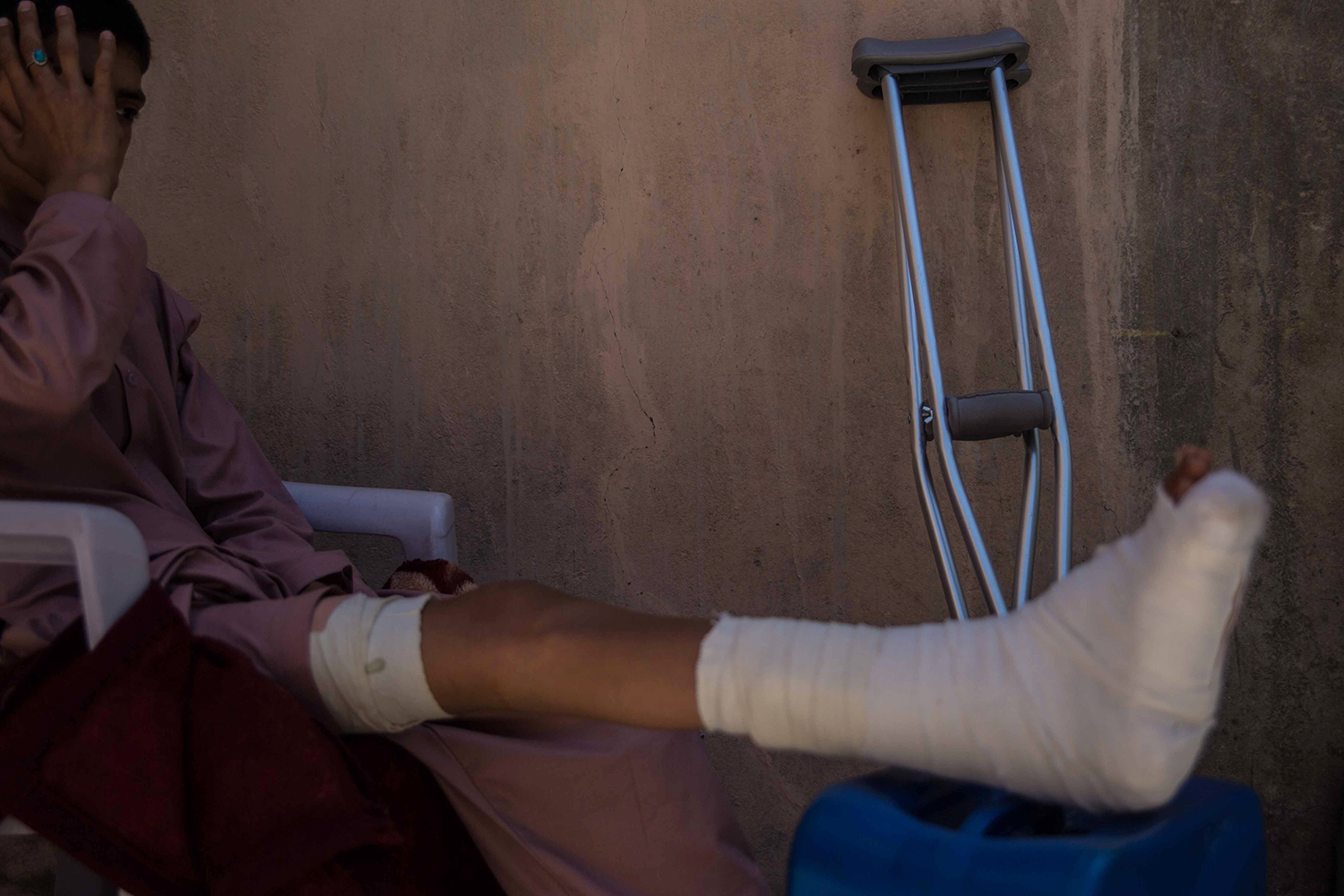 Naveed Mohammed sits at his grandparents’ home in Kabul on March 26, where he is recovering from a broken leg after his house in Maidan Wardak province was hit by a rocket. Stefanie Glinski for Foreign Policy

“We want both sides to calm down and end this violence,” Aziz said. “I’ve lived the majority of my life in war, and it’s always civilians who suffer. We hope this can be the beginning of the end of the war.” But Aziz is skeptical. “We’re constantly afraid of the Taliban and their atrocities,” he said.

His leeriness is shared by many Afghans affiliated with the government. “If the Taliban leaders really wanted to, they could end the violence and the killing … by extending the truce,” said Fawzia Koofi, one of the few Afghan women who will be part of the team taking up direct negotiations with the Taliban. But she says the Taliban know that if they continue the truce, they could lose hold of their foot soldiers, and commanders could sacrifice control of their revenue.

“The peace agreement with the U.S. further emboldened them to sustain their violent campaign to seek total victory over Afghan security forces,” Koofi said. “The Taliban’s military leaders reference [this victory] to keep soldiers motivated, telling them that they have defeated a superpower and the Afghan government would collapse shortly.”

A repeat of 2018’s Eid cease-fire was particularly crucial this year because of the fragility of the current moment in the Afghan peace process, said the International Crisis Group’s Andrew Watkins, adding that U.S. fingerprints were all over the preparatory work to nudge it into place as “violence, rhetoric, and disagreements all escalated in the past three months.”

The three-day break in fighting was welcomed by leaders worldwide, with U.S. Special Representative Zalmay Khalilzad saying that although difficult challenges remained on both fronts, he believed that they would be overcome “so long as leaders on all sides make the right decisions and put the interest of their people first. … This is a momentous opportunity that should not be missed.”

Afghans throughout the country have since called for the cease-fire to be extended, many of them taking to social media. “End the violence … so that we have space to breathe,” tweeted Afghanistan’s Independent Human Rights Commission Chairperson Shaharzad Akbar.

“The government is ready to extend the cease-fire,” National Security Council spokesperson Javid Faisal said, adding that he believed the Taliban were considering this possibility.

The U.S.-Taliban peace deal is dealt yet another blow as Kabul moves its security forces into “offensive mode.”

Kabul blames the Taliban for the killing of mothers and newborn babies but questions about the culprits remain.

Yet both the short cease-fire and the prisoner release have been seen as an opportunity to put stalled negotiations—initially planned for March 10—back on the agenda, even though a new date has not been confirmed and depends on the Afghan government releasing a total of 5,000 prisoners ahead of the talks.

Still, “these are highly positive signs and an indication that perhaps momentum is shifting toward a peace process,” said Scott Smith, an Afghanistan expert at the United States Institute of Peace, adding that so far the peace process had been U.S.-dictated, with the goal to get Afghans to talk to each other.

On Tuesday, the last day of the three-day cease-fire, Ghani ordered the release of 900 prisoners throughout the country, with people released in 19 out of the country’s 34 provinces. At a government prison outside Bagram Air Base, the largest U.S. military base in the country, around 600 Taliban prisoners lined up on Tuesday; with the facility hosting a total of about 3,000 of them, many stay in cells with 20-30 people. The Taliban described the release as “good progress.” 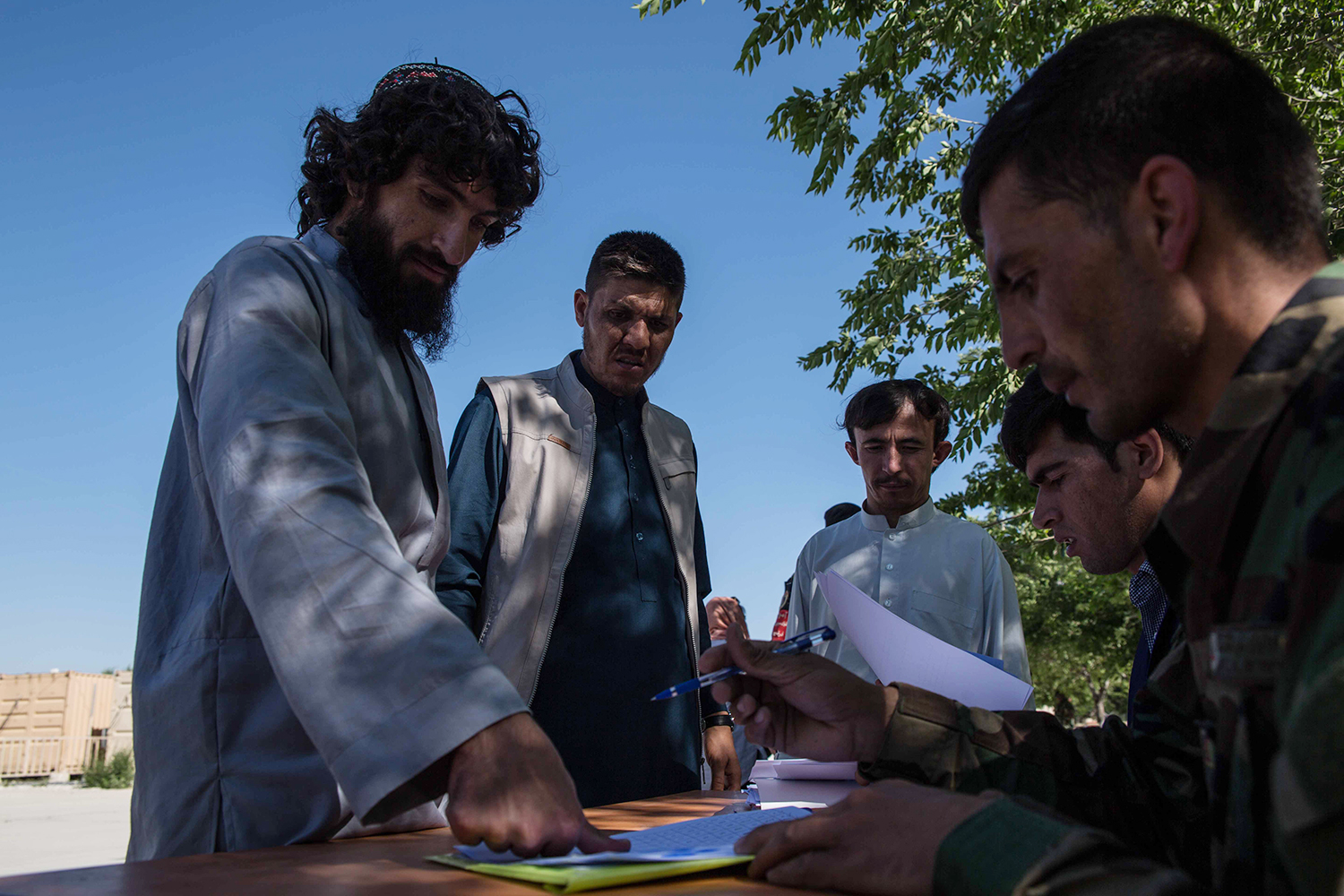 Prisoners sign or fingerprint a declaration saying that they won’t return to the battlefield as they are freed from prison near Kabul on May 26. Each receives 5,000 afghani ($65) for food and their journey home. Stefanie Glinski for Foreign Policy

They stood quietly in the hot sun, waiting for their turn to sign a waiver promising not to return to the battlefield anymore. Once they leave the prison, they are free.

According to Nasifullah Totakhail, a member of the Afghan Defense Ministry’s release committee, about 17,000 Taliban prisoners were still held in government detention throughout the country.

But even among those freed, opinions seemed fragmented. Abdul Basir, a 32-year-old political prisoner from the northern province of Faryab who had spent five years in detention, said he wanted to see peace, “no matter how.”

“The Taliban and the government need to come together. It’s what our people deserve,” he said, sitting in a bus full of prisoners, ready to take off toward Kabul, where the men are dropped off at long-distance bus terminals and are provided with enough cash to purchase a trip home. 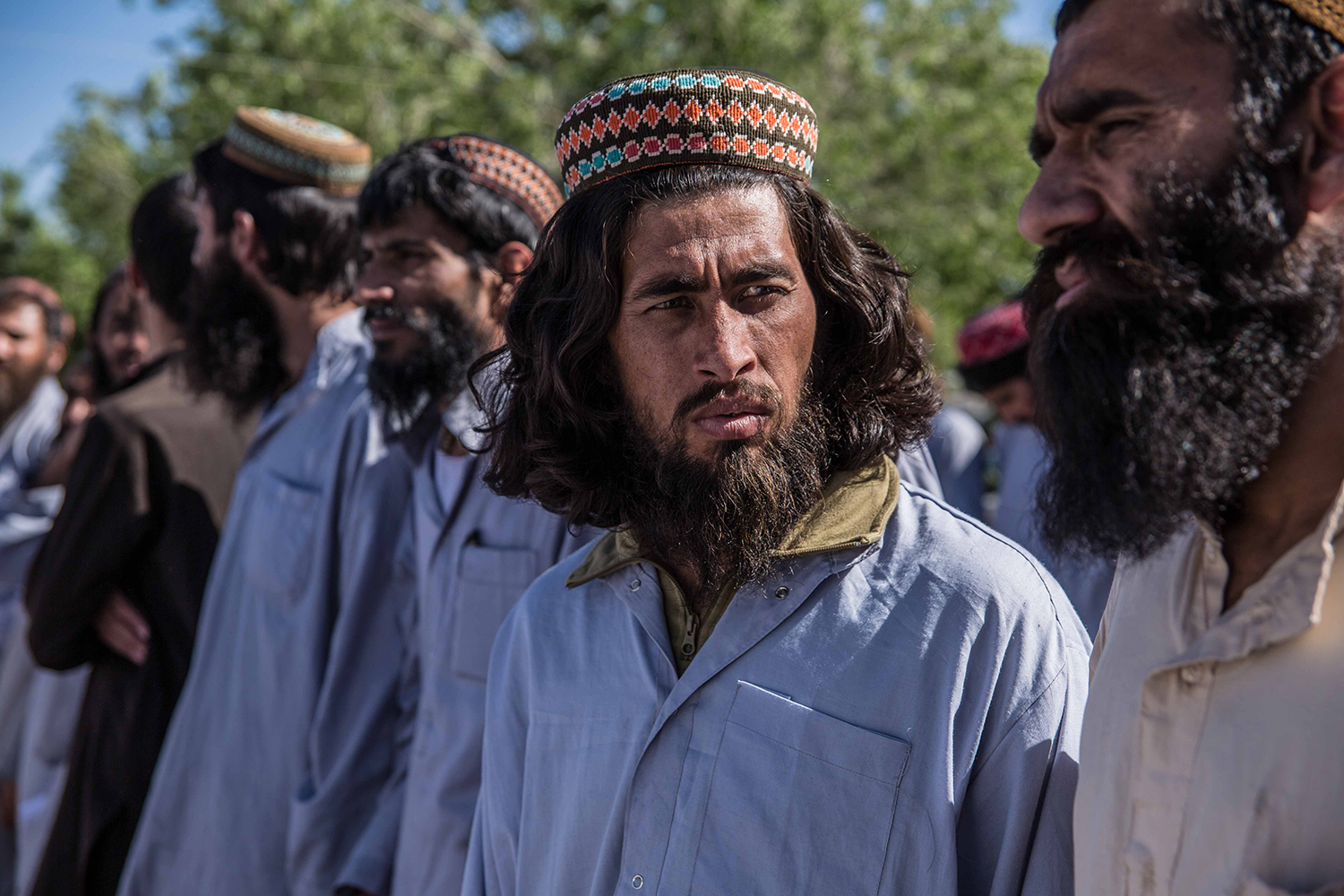 Taliban prisoners wait for their release at a government prison north of Kabul on May 26. Stefanie Glinski for Foreign Policy

Another man, Abdul Hak, 27, wasn’t as optimistic. Having spent more than five years at the prison, he regarded neither the cease-fire nor the prisoner release as a step forward.

“There won’t be peace in Afghanistan as long as the U.S. is still here,” he said to a soldier from his window seat on the bus, his fingers gliding through his chain of prayer beads. “They must leave for things to improve.”

It is difficult to determine whether any of the released fighters will return to their previous positions.

“We did our best to advise them and prepare them for life after prison, hoping they will keep their word,” explained Maj. Gen. Noorullah Kaderi, the prison’s military police commander. “The rest is up to them.”

For the family of Naveed Mohammed, it is difficult to know where the next attack will come from. As he described it, they merely found themselves in the middle of a battlefield that the long civil war has turned so many towns and villages into.

“The Taliban were hiding behind our house when government soldiers fired a rocket. It destroyed our home. Nothing is left,” said Mohammed, who suffered minor burns and a broken leg in the attack. He has since relocated to his grandparents’ house in Kabul. He sits with his grandmother, who, pulling up photos of his brothers’ dead bodies on her phone, tenderly kissed the screen, tears filling both her and Mohammed’s eyes.