Rioting in the aftermath of another police-inflicted death—this time in one of the most prosperous U.S. cities—reveals how little progress has been made.

MINNEAPOLIS—I woke up to the smell of smoke coming through the window. Black clouds billowed into the sky just a few blocks north as the arson that had been concentrated on Lake Street spread throughout the community overnight. Teenagers were looting the corner gas station, and on what was previously forecast to be a sunny spring day, the weather prediction on my phone turned to “smoke.”

That was Friday. By the weekend, things were worse. In defiance of an 8 p.m. curfew, rioters continued to set fires across the city, and, according to Minnesota Gov. Tim Walz, who held a news conference in the middle of the night calling for calm, authorities were deploying three times the force they did during the 1960s race riots. The Target store where so many of us shopped for essentials during the coronavirus lockdown had been vandalized, looted, and set on fire. So, too, many small businesses in the community that were already struggling with virus-induced shutdowns. Neighborhood shops were boarded up, and the violence began extending to formerly quiet residential areas.

It all started here, in Minneapolis, in one of the country’s most stable and prosperous cities. But by Saturday and Sunday, rioting and protests had erupted from New York City to Los Angeles, with Atlanta placed under a state of emergency. Violent confrontations with police continued through the weekend in many cities, including Washington, D.C., where President Donald Trump was taken by Secret Service agents to an underground bunker as protests raged across the street from the White House in Lafayette Park.

All this because a problem that too many Americans thought had eased or decided to ignore—police abuse of minority communities—returned in the most shocking way, with criminals and vandals exploiting what began as legitimate protests. Yet in truth the killing of George Floyd has inflamed tensions that have been mounting for years in Minneapolis—due to not only the city’s history with the killing of its black residents by Minneapolis police officers but growing economic inequality, gaps in education and access, and most recently the disproportionate impacts on black and brown communities from the coronavirus, both in terms of infections and deaths but also layoffs.

The damage will be long-lasting as many of these small businesses likely won’t recover; much-needed housing development is now also smoldering, some of it in ruins. Some civil rights experts say they had been expecting this, that it was only a matter of time before such rage exploded given the rise of social tensions and racially connected arrests in recent weeks. Black men wearing face masks have been especially confronted and arrested during the COVID-19 lockdown—including a black doctor in Miami who, it turned out, had volunteered to test homeless people for the virus.

An affordable housing development that was under construction smolders in Minneapolis on May 29 after a night of protests. Allison Carlson/Foreign Policy

Minneapolis Mayor Jacob Frey sought to assuage angry protesters by quickly firing and urging criminal charges against the officer, Derek Chauvin, who was videotaped kneeling on Floyd’s neck for nearly nine minutes as the victim cried, “I can’t breathe,” an incident that hauntingly echoed the infamous death of Eric Garner in New York City in 2014. On Friday, Chauvin was charged with third-degree murder—a striking contrast to the fate of Daniel Pantaleo, the NYPD officer allegedly responsible for Garner’s death who wasn’t dismissed until five years later and who was never indicted.

Along with the shooting of Michael Brown in Ferguson, Missouri, in August 2014, the Garner killing inspired nationwide protests and the Black Lives Matter movement. And some experts and civil rights activists have acknowledged there has been more responsiveness since Ferguson and a spate of citizen videos first began revealing police abuses in the 2010s.

In the past, there was “a tendency in law enforcement for police to circle the wagons and defend one another from criticism, even where their positions seemed indefensible,” said Edward McGuire, a professor of criminology and criminal justice at Arizona State University. “We are not seeing that in this case. My Twitter feed is overwhelmed right now with statements from police leaders from around the world condemning the actions of these officers.”

Others are far more skeptical. “If the incident wasn’t recorded and if the city wasn’t burning, he [Chauvin] wouldn’t have been arrested,” said Michael Bell, a retired Air Force officer who began a nationwide campaign for police accountability after his 21-year-old son was shot to death in Kenosha, Wisconsin, in 2004. “That shouldn’t be what it requires to get justice. This is just a measurement about how bad the system really is.”

Scenes around Minneapolis on March 29 and 30. Allison Carlson/Foreign Policy

Indeed, the outrage in one of America’s most hitherto stable cities in the heartland exposed the ugly reality that little has changed in terms of holding police accountable for violent treatment of citizens, experts say. Because of inbred collaboration between local police departments and their unions, the district attorneys who depend on those police unions for electoral support, and the court system—all of whom also tend to benefit financially from arrest fees and ticket fines—few police are ever convicted of wrongly killing anyone or other chronic abuses.

“It is business as usual when it comes to accountability in the courts for police crime,” said Philip Stinson, the author of Police Integrity Lost: A Study of Law Enforcement Officers Arrested. Stinson, a scholar at Bowling Green University in Ohio who keeps a database of the arrests and convictions of police officers in every U.S. state, said in an email that by his count, since the beginning of 2005, only 110 nonfederal sworn law enforcement officers have been arrested for murder or manslaughter resulting from an on-duty shooting throughout the United States. Of those officers arrested, to date only 42 have been convicted in the entire nation in the last 15 years.

Very often these abuses fall on minority communities. In the ensuing years since Ferguson, private or police videos have revealed police practices that went unchecked in the pre-cell phone era, such as the notorious incident in which South Carolina police officer Michael Slager shot at a fleeing Walter Scott eight times and then was filmed planting his Taser next to the victim’s body. One city after another has been subjected to consent decrees from the U.S. Justice Department calling for reforms, but they’ve been slow to respond.

“While Minneapolis allows this kind of neck pressure that killed Mr. Floyd as a form of non-lethal force, others have backed away from these sorts of potentially deadly holds or at least put limits on when they can be used,” David Harris, a criminal law professor at the University of Pittsburgh and a leading authority on racial profiling, wrote in an email. “Chicago, for example, puts limits on sitting, standing or kneeling on a suspect’s chest, after gaining control of the suspect, because of potential breathing problems. NYPD made the use of chokeholds against policy (though the officer who killed Eric Garner with one stayed on the job for five years and was not charged).” 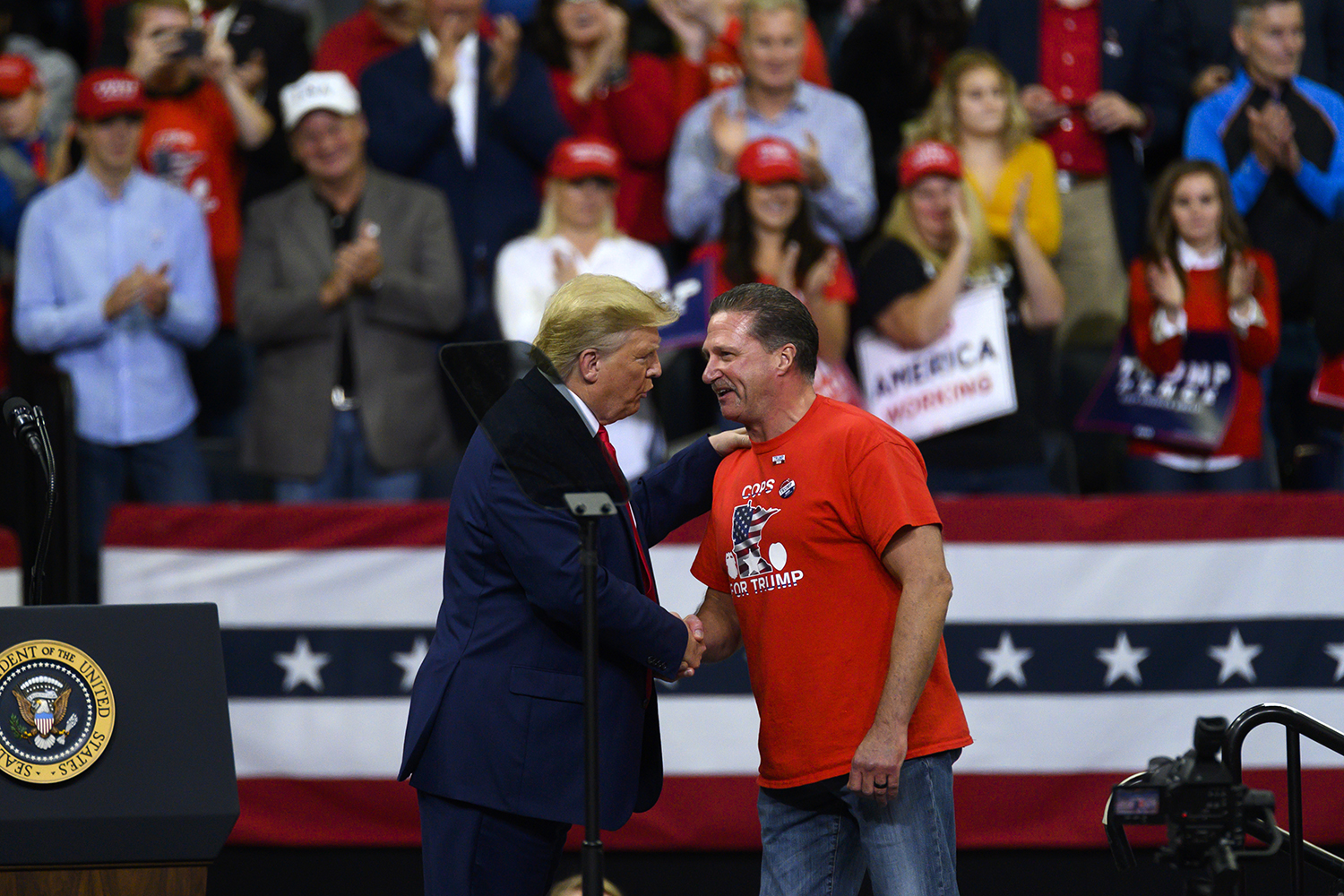 In the case of Chauvin, according to the criminal complaint filed against the veteran Minneapolis police officer: “Defendant had his knee on Mr. Floyd’s neck for 8 minutes and 46 seconds in total. Two minutes and 53 seconds of this was after Mr. Floyd was non-responsive. Police are trained that this type of restraint with a subject in a prone position is inherently dangerous.” Four other Minneapolis officers were fired, and Mayor Frey later said the restraining technique used by Chauvin was against regulations.

The issue of race and police violence is almost certain to enter the 2020 presidential race. Trump, who at first lamented Floyd’s death, appeared to only inflame tensions when he quoted civil rights-era white segregationists, tweeting: “When the looting starts, the shooting starts.” Strikingly, Trump, in a Rose Garden news conference on Friday, then declined to talk about Minneapolis at all, saying, “I am here to talk about China.” (He was announcing the U.S. withdrawal from the World Health Organization, which has allegedly fallen under the influence of Beijing.) Meanwhile Democratic presumptive nominee Joe Biden said Trump was “calling for violence against American citizens.” Biden declared that Floyd’s death exposed an “open wound” in the nation’s history stemming from the racism that “still stains” the United States.

Trump, on the other hand, appeared eager to play to his largely white conservative base, as he often has in crises. After CNN’s headquarters in Atlanta was vandalized early Saturday morning, Trump retweeted a conservative supporter who said the network was “being attacked by the very riots they promoted as noble & just.”

In an echo of what happened five years ago, the protests spread nationwide as other cases came to light. In Georgia, protesters demanded justice for Ahmaud Arbery, a black jogger killed in February by two white male vigilantes, including a retired police officer. In Louisville, Kentucky, demonstrators demanded the same for Breonna Taylor, a black EMT who was fatally shot by police at her home in March. 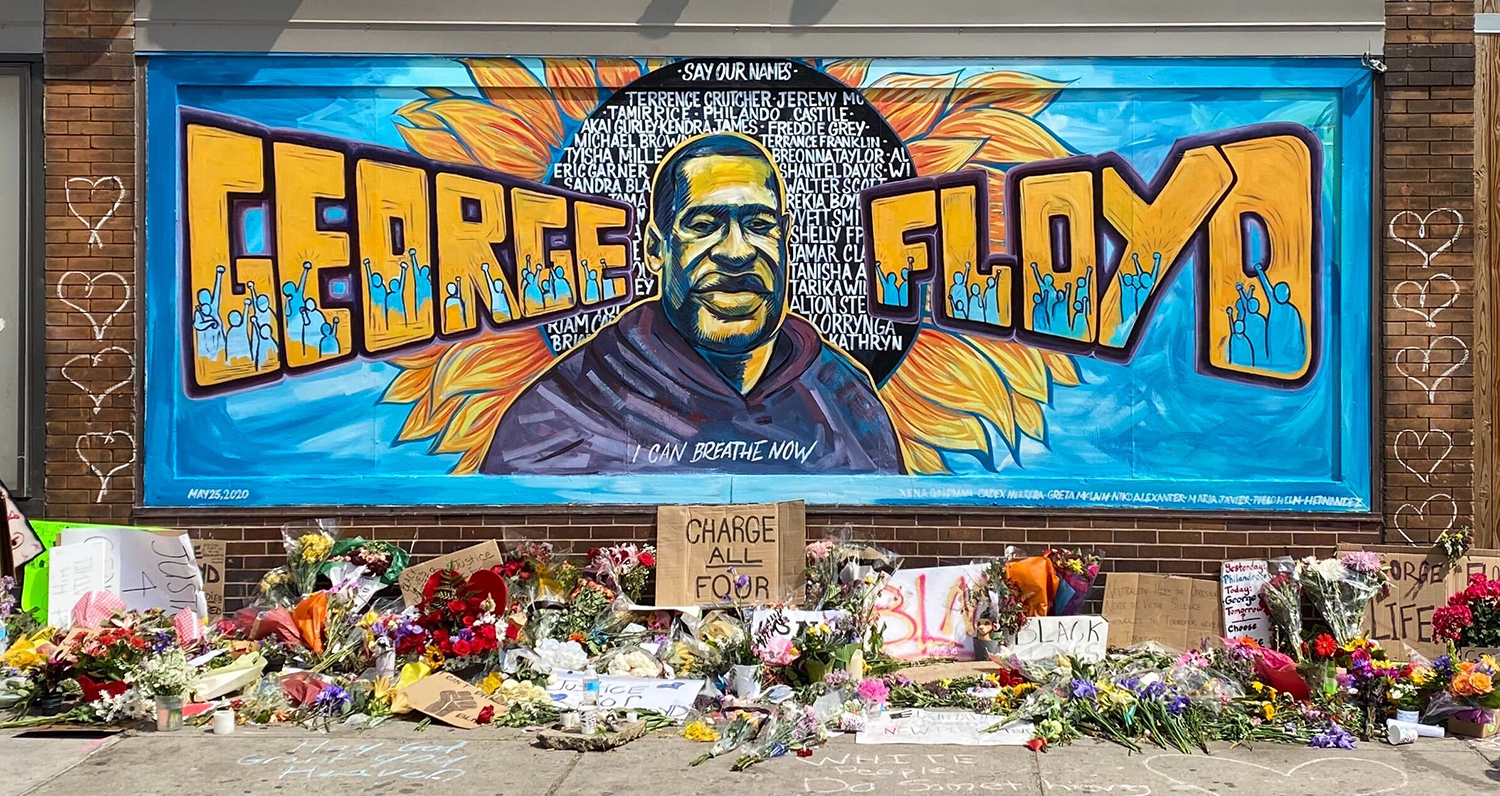 A memorial to George Floyd in Minneapolis on March 30.Allison Carlson/Foreign Policy

“There’s been no meaningful progress on the issue of structural police violence,” said Alec Karakatsanis, founder of Civil Rights Corps, a nonprofit civil rights group, in a phone interview. Bell, the Wisconsin man whose white son was killed by police, said: “I feel the black man’s frustration. What else is left for them? It is either burn things down or be gunned down by cops. They are not left any other choice.”

Still, some experts such as Harris of the University of Pittsburgh see a “sea change” in the response of authorities in Minnesota. “In times past (pre-Ferguson) the normal procedure was a slow walk—please be patient, we’re doing an investigation, etc. One week becomes one month, becomes one year. And then sometime, a year or more after the incident, once everyone has stopped paying attention—the [district attorney] announces (late on a Friday) that they have decided they will not file charges. See the reverse now: as soon as they have enough evidence, and certainly where they have strong evidence, they announce they will go forward.”

Despite Chauvin’s arrest, however, Minnesota officials are warning of deteriorating conditions over the weekend with the numbers of protesters expected to grow. Authorities say resistance is exponentially greater than anticipated, and while there have been many peaceful protesters, there are growing numbers of armed and entrenched rioters, and officers have been fired on. Rioters are stopping semitrailers and UPS trucks and raiding them. A Minnesota National Guard spokesperson, Jon Jensen, said the guard is escorting three fire department teams to fires across the city, and the governor authorized the National Guard to increase strength by an additional 1,000 soldiers—the largest deployment in Minnesota history.

The FBI, meanwhile, has provided intelligence that there are critical threats to National Guard soldiers, authorities said.

May 31: This story has been updated with continuing protests.

Allison Carlson is the managing director of FP Analytics. She lives in Minneapolis, Minn. Twitter: @allisonmcarlson