MEXICO CITY—The coronavirus section of the public cemetery in Iztapalapa consists of rows of wreaths. The municipality in Mexico City has the highest number of confirmed infections in the country, and most of the graves are too fresh for headstones. Workers, who dig for families’ tips, unzip their blue hazmat suits to make it through the heat, then close them up again to carry plastic-wrapped caskets. Only two mourners are allowed per funeral; the remainder gather at the cemetery’s gate.

Confused about the pandemic’s spread, many families who arrive at the Iztapalapa cemetery are skeptical that the virus ended their relatives’ lives. But because the coronavirus is listed as a possibility in the death records, friends and relatives are suddenly absent. People say they have lost their ability to grieve as the dead deserve. The uncertainty, at burial time, about what happened to their loved ones has left many unmoored.

Mexico has recorded more than 90,000 coronavirus cases and 9,000 deaths, but the actual rate is likely far higher. Critics have said the government is minimizing the virus’s effects, since the country has one of the lowest testing rates in all of Latin America. The top epidemiologist has said that a committee will eventually review cases in which COVID-19 is suspected but not confirmed, but by then the funerals, cremations, and last rites will already be over. 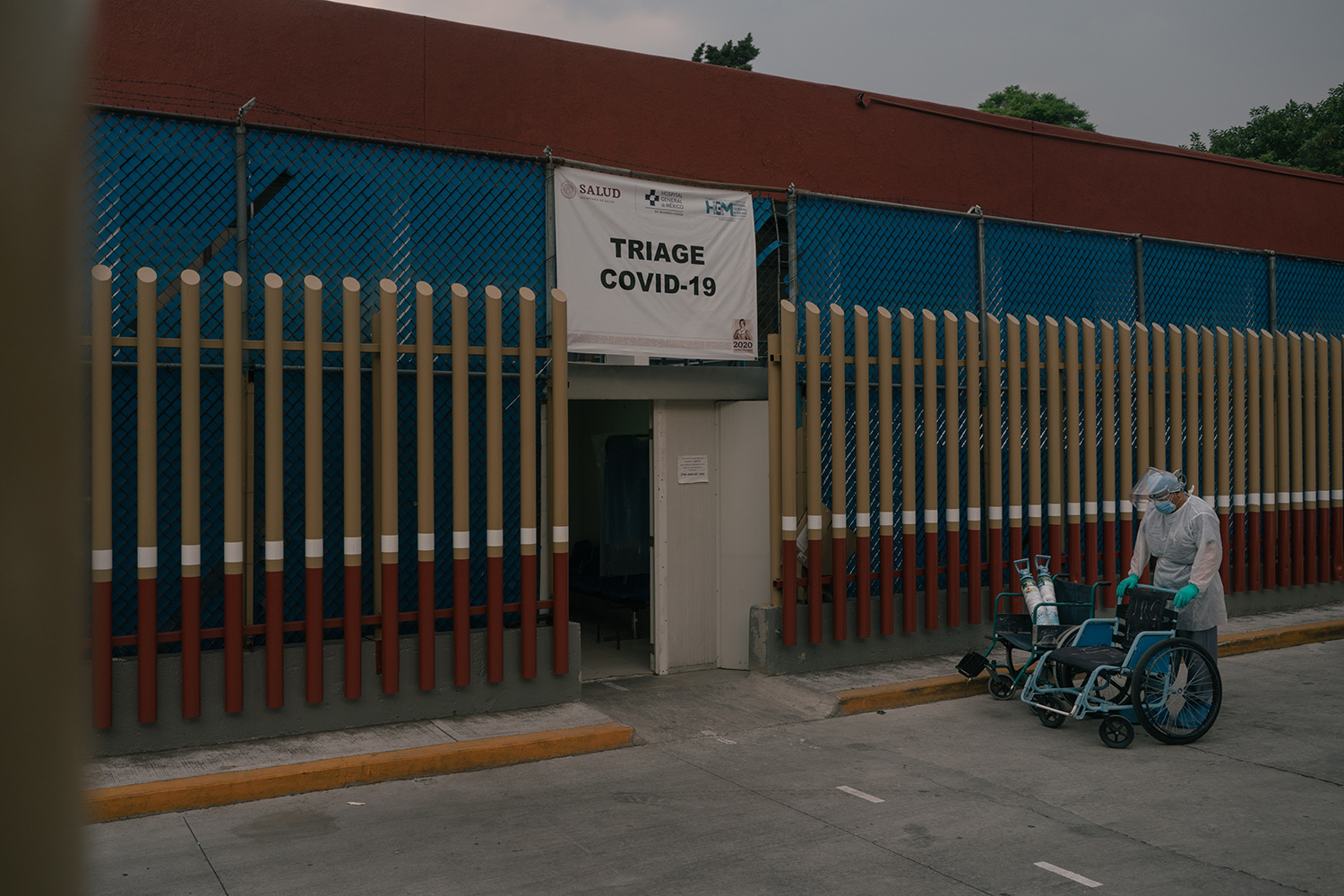 A hospital worker waits outside a COVID-19 triage unit at the General Hospital of Mexico in Mexico City on May 21. 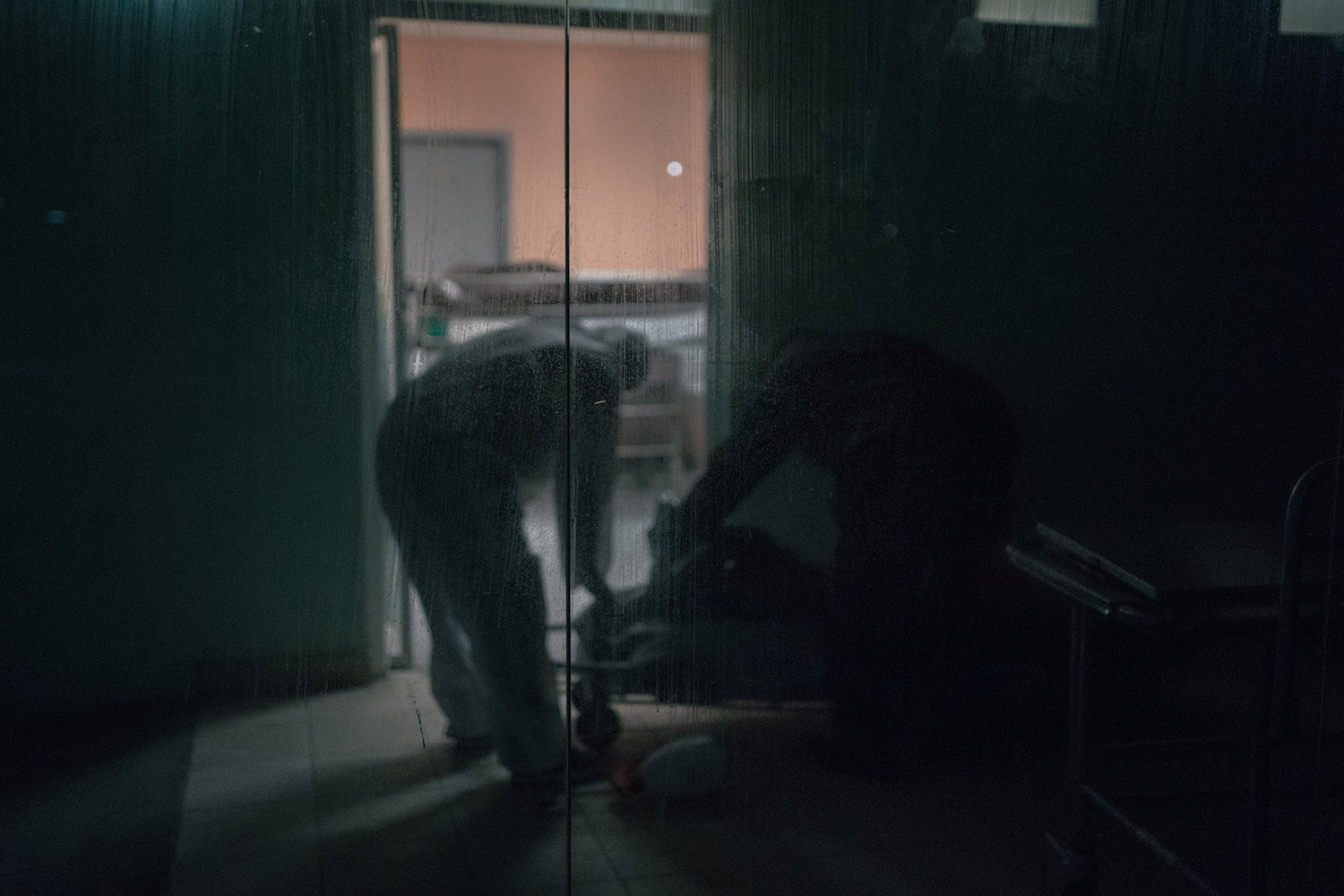 A man identifies the body of his mother, who is suspected to have died from COVID-19, outside the morgue of a public hospital in Iztapalapa on May 9.

“We usually do a Bible reading, but in this situation we couldn’t, because of all the restrictions,” said Alvaro Pérez, 40. He started to weep as diggers shoveled dirt over his sister’s body, after her death was listed as of “suspected” coronavirus in the certificate. The workers move quickly, sending dirt flying for new graves even as vans unload the next caskets.

Mexicans are exceptionally close to their dead, a tradition that predates the arrival of Christianity. They hold overnight wakes at home, where sleepless family members dole out coffee and sweet bread. They flock to the cemetery with marigolds for an annual celebration, to spend the whole day with those who have passed. Catholics pray for nine days, to usher the deceased’s soul to heaven, as members of the community, sometimes hundreds, come to offer condolences.

None of that is possible now. Priests livestream last rites from funeral homes. To make up for the absence of a live band to serenade the dead with their most beloved songs, one man held his phone over a plastic cup to amplify a mariachi ballad. Two brothers filmed their mother’s burial with a cell phone as the diggers move across to the grave, a plastic Jesus bending his knees; the workers made an exception, allowing one of the men to touch the glass covering her head. 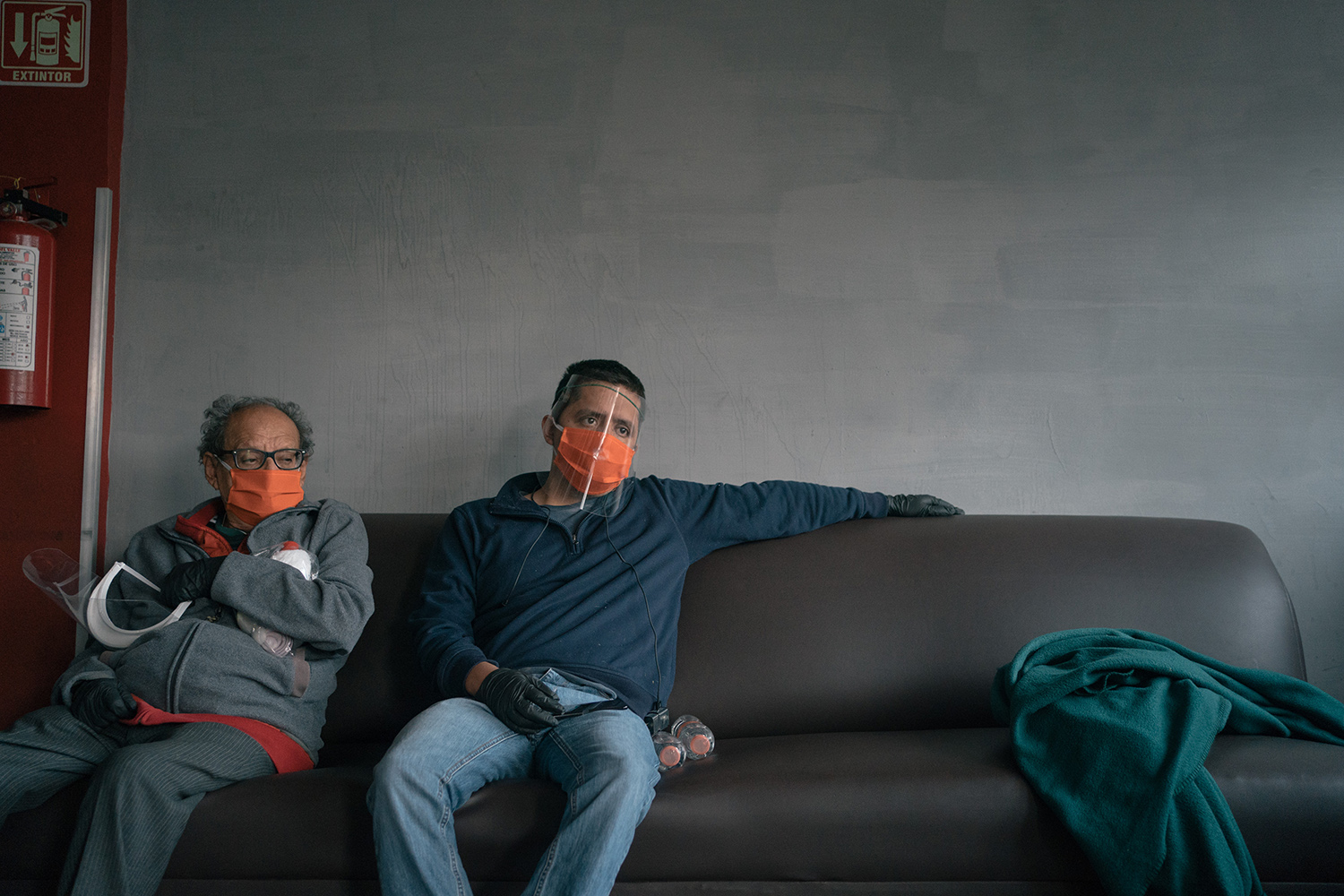 Adán Bello, 27, waits with his father for the cremated remains of his brother, who died from complications related to COVID-19, in Ciudad Nezahualcóyotl, outside Mexico City, on May 12. 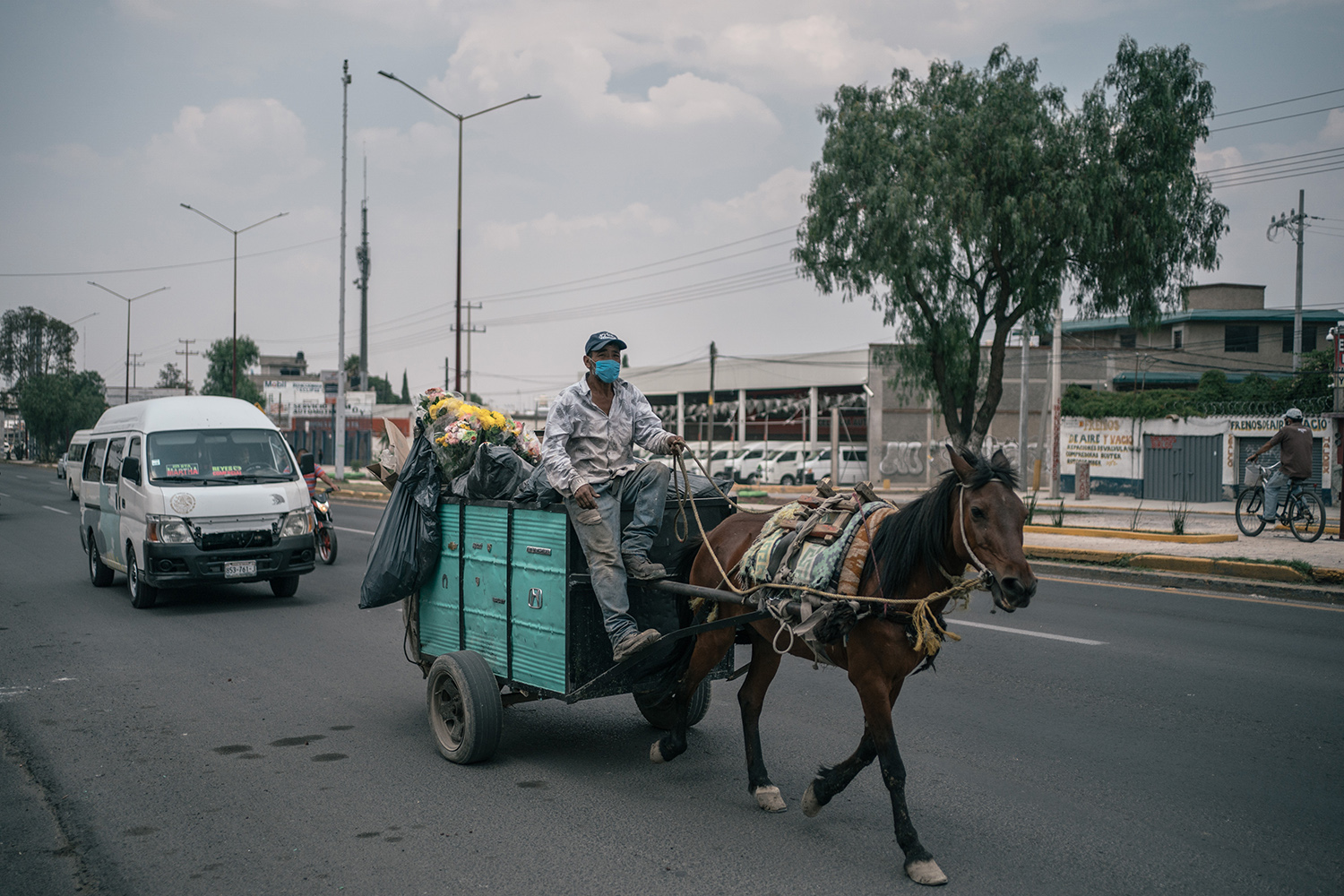 A man transports bouquets of flowers and bags of trash in the back of his carriage in Texcoco, outside Mexico City, on May 12. 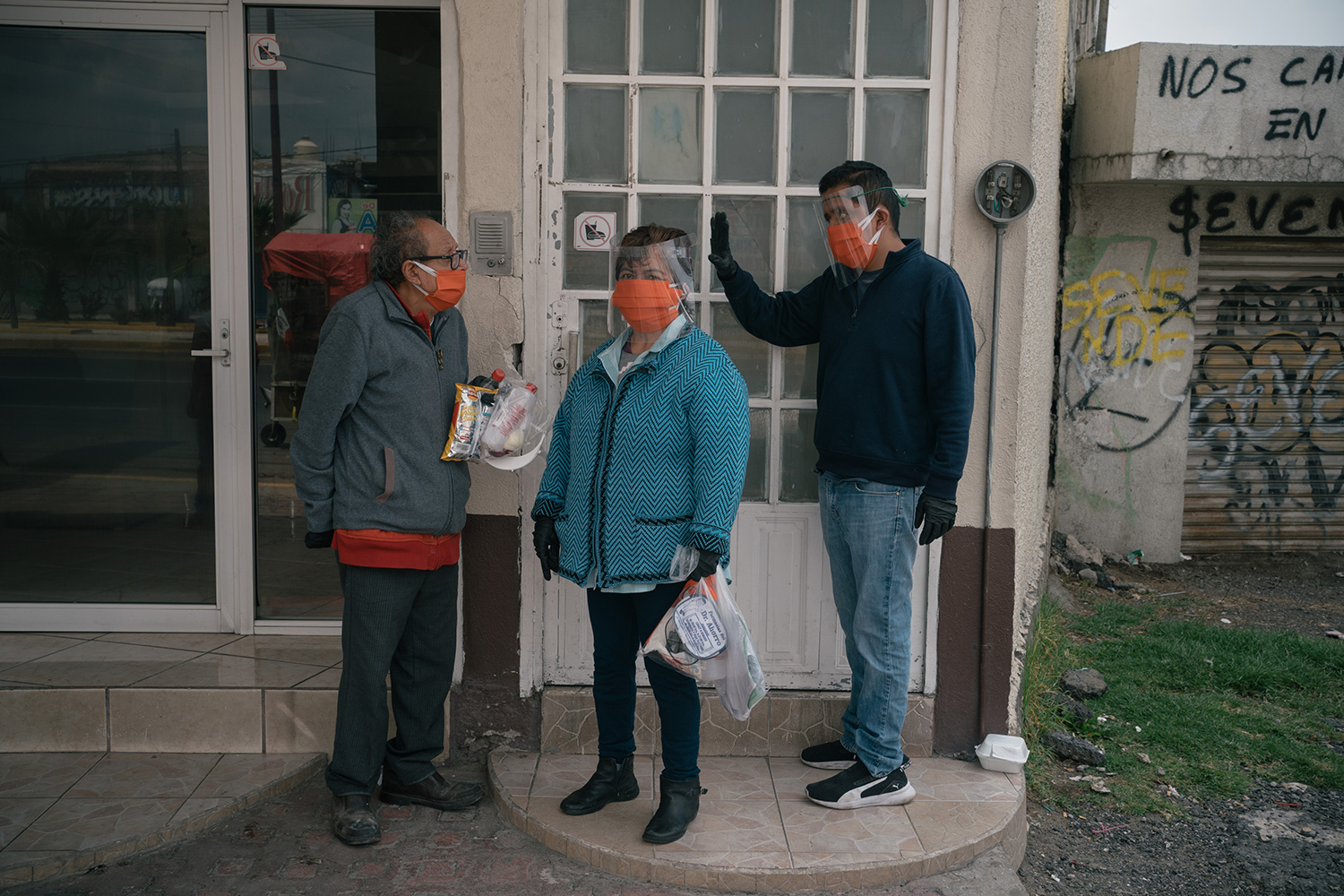 Standing with family members, Rosita de Lima Navarro Pérez (center) waits for the remains of her son outside a crematorium in Texcoco, outside Mexico City, on May 12. The cost of her son’s treatment, along with the testing of family members for the coronavirus, has left them in debt.

The government has instructed hospitals, funeral homes, and gravediggers to follow sanitary protocols for bodies suspected of being infected. Most are cremated, and in the few cemeteries that allow burials, the services are brief. Teresa Zapatero Ramírez, 42, said she was so rushed at her mother’s funeral that she plucked flowers from the ground of a cemetery in Nezahualcóyotl, a municipality adjacent to Iztapalapa, after she had forgotten a bouquet.

Sometimes people worry that members of their own community will call them carriers of the sickness. Zapatero said her grandfather had died earlier this year, and she remembered how other mourners had helped her by telling her the words to pray. Now, relatives watched from behind their doors as she left for her mother’s funeral, and only one got close enough to slip money into her hand to defray the costs.

“My father was a clown, one of those people who puts on clown shows, and so many people knew him. But not as many people arrived as I expected,” said Rosa Isela Rangel Buendía, 22, whose father was also marked as a suspected COVID-19 case. “Many people started to judge us and said, ‘Don’t go out if you were with him.’ The doctor basically told us to burn his clothes.”

The issue of undercounting is not exclusive to Mexico. Analysts and officials have doubted the data in countries across Europe and in the United States. But in Mexico, which hesitated to have a lockdown as strict as those in other countries in Latin America, the debate has become fiercer as the number of cases has risen. Regionally, only Brazil has more confirmed deaths.

This grim outlook comes along with widespread distrust of authorities and underfunded public hospitals. Many people at first did not believe that the virus existed, then did not believe that they had the misfortune of facing it. As a dispute has unfolded over Mexico’s management of the crisis, families are asking not for answers about how many overall deaths there might be, but for closure in their specific cases. 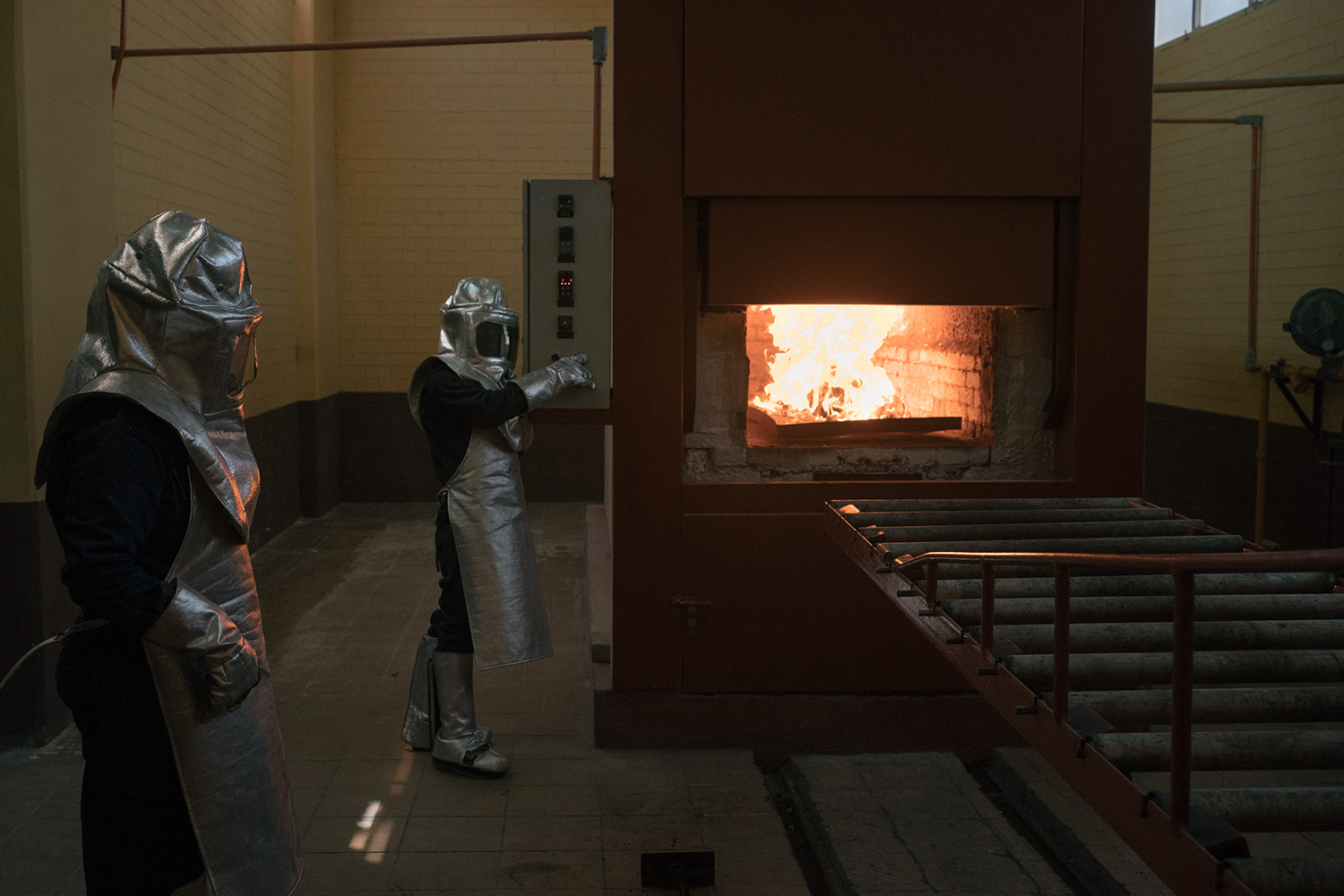 Juan Carlos Cruz González (left) and his cousin, Victor Manuel Cruz Ramos, employees at a crematorium in Ciudad Nezahualcóyotl, outside Mexico City, cremate the body of a person who is suspected to have died from COVID-19, on May 16. The two said they had worked for 20 days without pause to handle the increasing number of coronavirus victims. 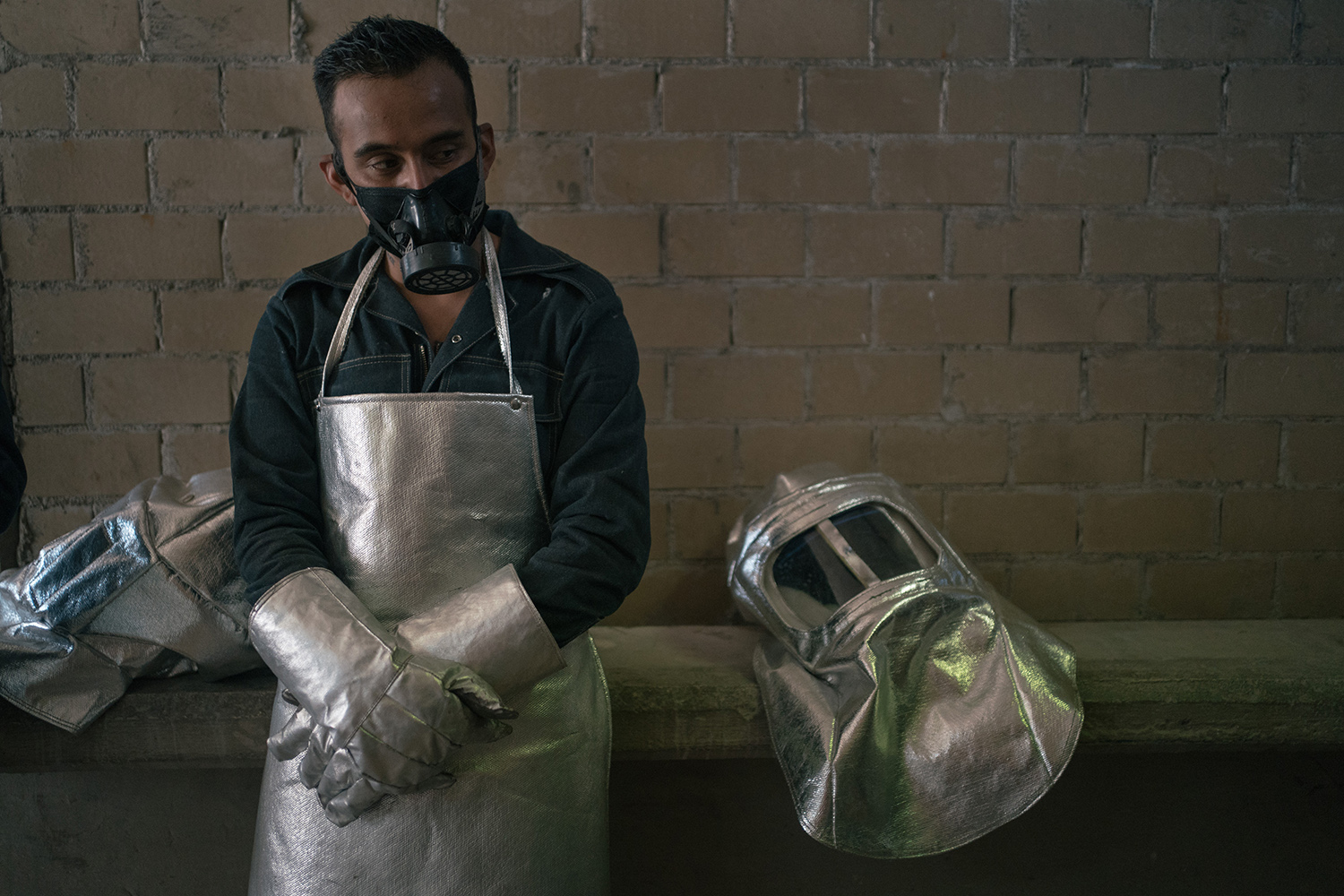 Cruz Ramos rests beside his protective gear after a cremation on May 16. 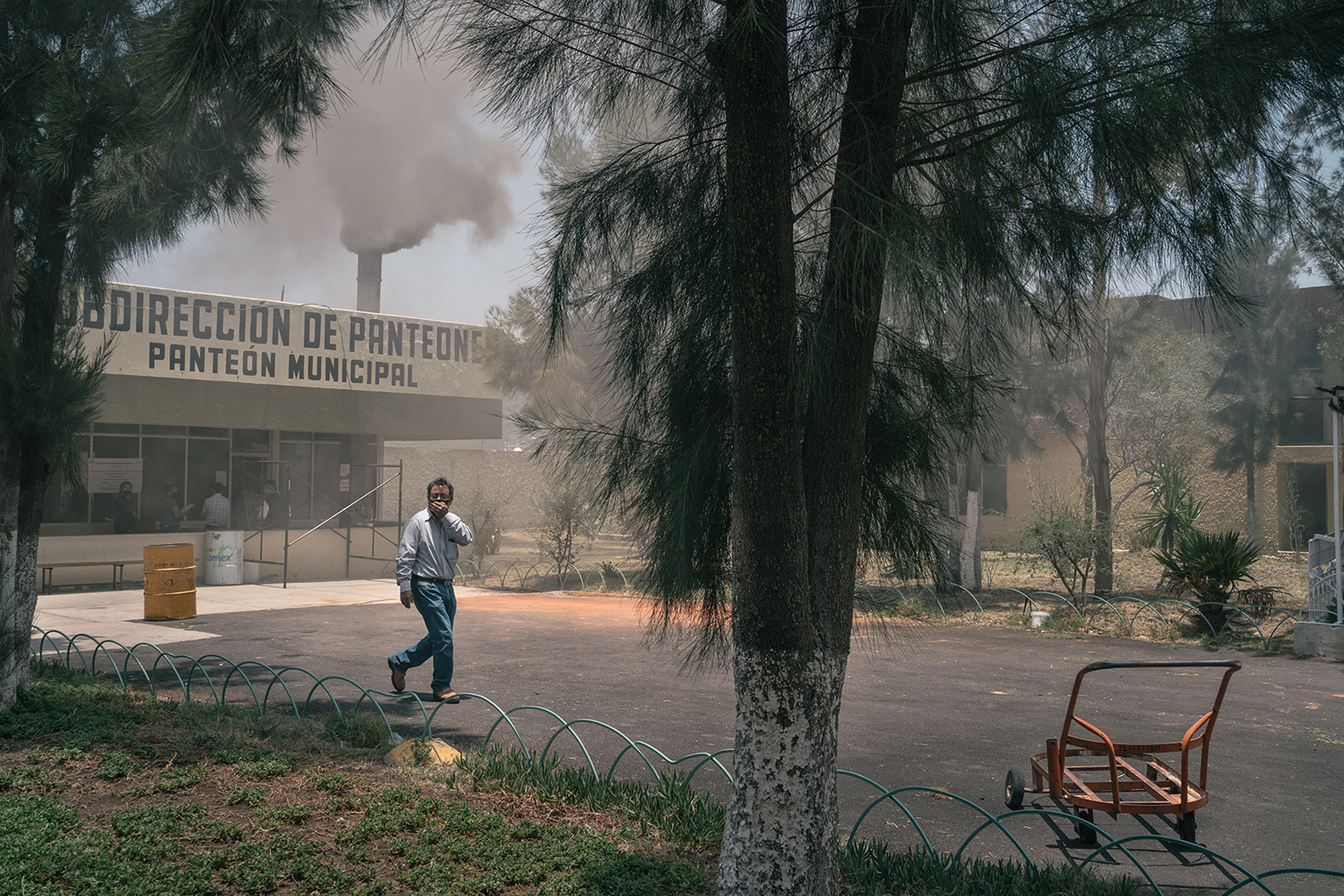 A man walks away from a public cemetery building as smoke from the crematorium fills the air in Ciudad Nezahualcóyotl on May 12.

Mexicans have high rates of preexisting conditions that put them at greater risk. For people whose relatives enter the hospital with all kinds of ailments—diabetes, kidney failure, cancer, hypertension—and leave within days in body bags, cataloged as the virus’s possible but not certain victims, it’s especially hard to accept the verdict. With so few tests, the final word on a loved one’s cause of death can add to suspicion after the initial shock.

The pandemic caught Mexico in the middle of one of its biggest health reforms in years, one that sought to expand health coverage to millions of uninsured people and to restore trust in its health system. But when the coronavirus came, people still headed to private doctors, neighborhood clinics, and pharmacies, to avoid long waits and crowds. When dying patients are admitted to hospitals, their families do not know on what basis doctors decided that they have the virus.

Following a series of news stories about a coronavirus undercount, the nonprofit Mexicanos Contra La Corrupción y La Impunidad reported that more than 3,000 death certificates in Mexico City listed people at the time of their deaths as “suspected,” “possible,” or “probable” COVID-19 victims. Claudia Sheinbaum, Mexico City’s mayor, said the government has been transparent, but an independent committee has to finish reviewing medical records and death certificates before it can update the count.

A string of funeral homes stands across the street from the Iztapalapa cemetery and next to the hospital gate where people wait for their dead. The funeral home doorbells ring at all hours of the night, and sleepy staff arrive to show people the caskets crammed into their showrooms.

“[Hospital staff] check our vans when we take someone out of the hospital, and they ask us for protective equipment, but you see the pathologists dressed like this, normally, “ said Javier Verón López, 53, a funeral home employee who transports bodies, pointing at his long-sleeve button-up shirt and jeans, “and you ask yourself, ‘Does it exist or not exist?’” 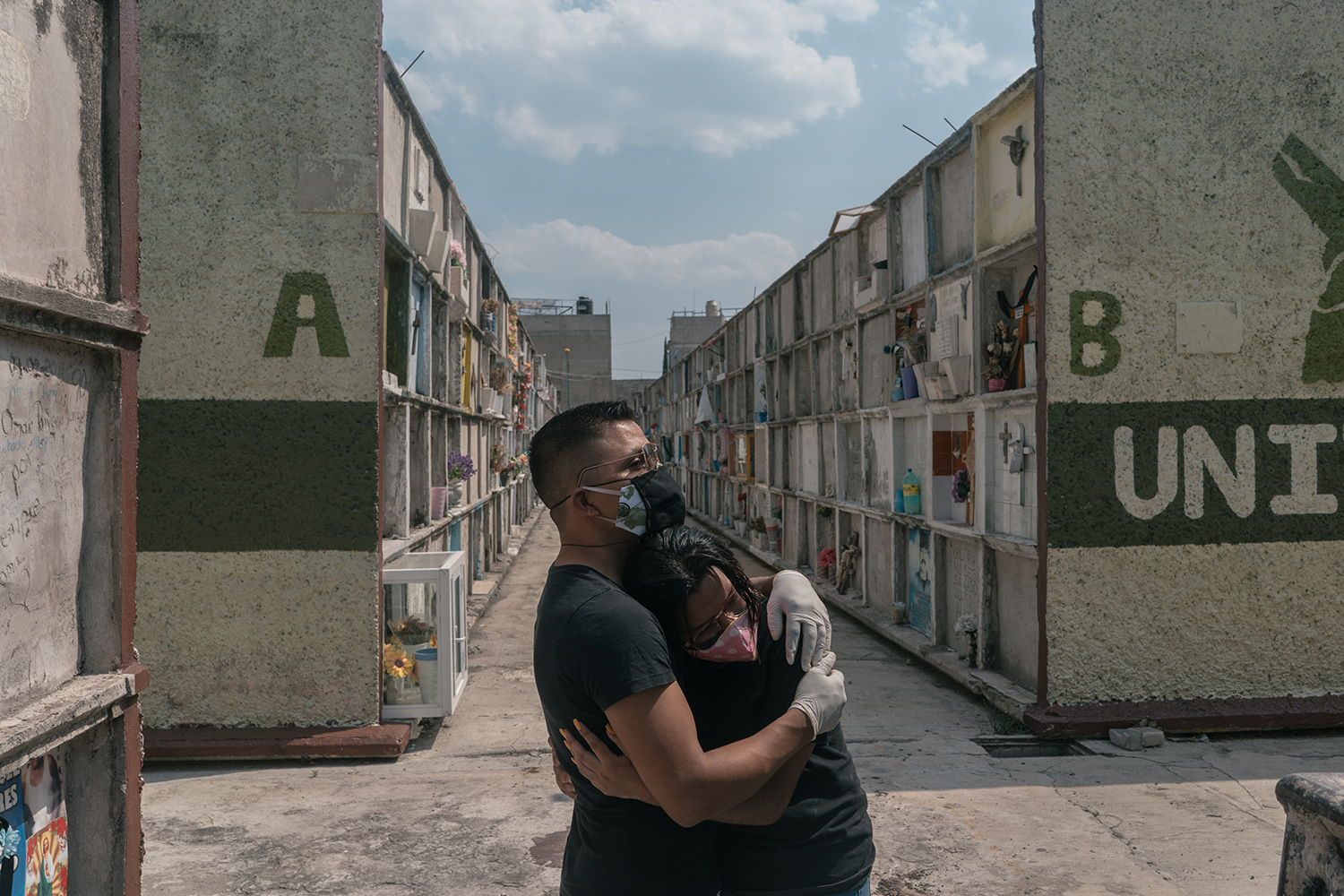 Sixteen-year-old Flor Clara Magdalena García Rojas (right) hugs a friend after the funeral of her mother at a public cemetery in Ciudad Nezahualcóyotl on May 17. The mother, who had diabetes, worked as a janitor at a private hospital that treats COVID-19 patients and is suspected to have contracted the virus.

Those who are certain the virus swept through their families say they hope bending tradition will help stop its spread. But they still struggle with doubts about the protocols meant to protect them. Outside a crematorium, Rosita de Lima Navarro Pérez, 58, banned from going inside and seeing her son’s body, asked a funeral home employee to send his ashes and a photograph as proof, out of fears they might have the wrong body.

“In normal circumstances, we’d spend the night with our family. There are flowers, hugs, a family’s affection. But this situation doesn’t allow for any of that,” she said. She was running a fever and struggled to stand. Before she got a taxi home, she told the staffer: “Just make sure he’s my son.”

State leaders are showing up the president in their pandemic response, giving López Obrador’s critics their loudest opportunity yet to oppose his policies.