After a bloody Ramadan, the Afghan government and the Taliban called for a three-day truce that mostly continues. But Islamic State terrorists are already conducting more massacres.

Overall violence in Afghanistan has abated somewhat as large numbers of both Taliban and Afghan national forces have continued to informally observe a cease-fire called during the Eid al-Fitr holiday, which marked the end of the Islamic month of Ramadan in late May.

But on May 30, a roadside bomb in Kabul killed a journalist and a driver from an Afghan television station, and the Afghan franchise of the Islamic State—known as the Islamic State Khorasan Province (ISKP)—claimed responsibility. On Tuesday, June 2, another attack occurred, killing Mawlana Mohammed Ayaz Niazi, a well-known cleric who served as the imam of the Wazir Akbar Khan Mosque in the heart of Kabul, and ISKP later said it was responsible for that blast as well. The surge of ISKP attacks suggests to many Afghan experts that the terrorist group is likely intent on disrupting any long-term move toward peace.

Many of the most brutal attacks in the last few weeks appear to have been the work of the ISKP. One of the bloodiest occurred on May 12, when at least 24 mourners were killed by ISKP militants at a funeral in the eastern province of Nangarhar. On the very same day, another gut-wrenching massacre took place in western Kabul. A Médecins Sans Frontières-run maternity clinic was attacked by gunmen dressed up as security personnel and medics. Twenty-four civilians were killed, and dozens were injured, including women and newborns. While no group took responsibility, many observers believe that ISKP was behind the attack, noting that this attack, like others committed by ISKP, targeted Shiite Hazaras. A few weeks earlier, in late March, ISKP attacked a Sikh temple in Kabul’s old town, killing 25 members of the Afghan Sikh community.

But while ISKP’s parent organization is largely known in much detail, its Afghan branch remains mysterious since its first appearance in 2015. In a further perplexing twist, it seems that any connection between the two barely exists beyond paper. “I would look at them separately, also because of the geography,” said Thomas Ruttig, the co-director of the Afghanistan Analysts Network. Ruttig said many of these Afghan Islamic State militants act independently of each other, suggesting that negotiation might prove impossible. “They don’t have to interact with each other. They are able to operate separately while proclaiming attacks under one banner. That’s the whole idea of the Islamic State’s franchise terrorism,” Ruttig told Foreign Policy in a phone conversation.

As a result, like many other observers of the Afghan war, Ruttig believes that despite a U.S. orchestrated plan for peace talks, long-term stability in the country appears far-fetched as long as terrorist groups like ISKP exist. According to Waheed Mozhdah, a late Afghan analyst and writer known for his insight on Islamist militant groups, “war in Afghanistan will decrease, but conflict and bloodshed will not vanish.” Mozhdah himself became a part of his analysis when he was killed last November by unknown gunmen in Kabul.

A new report by the U.S. Institute of Peace suggests that ISKP is laying the groundwork for ideological radicalization not just in rural areas but also in urban areas in Afghanistan, and this will probably not stop even if a final peace deal is reached between the Afghan national government and the Taliban. The report, by Borhan Osman, one of the leading experts on militant groups in the region, notes that many ISKP members have a middle-class, educated background and are from urban areas like Kabul.

“In contrast with their rural counterparts, who often step into the jihadist enterprise in the absence of promising normal career options, a significant number of those joining ISKP from the central urban areas (Kabul and the surrounding urban centers of Parwan, Kapisa, and Panjsher Provinces) come from families that can be labelled ‘middle-class,’” Osman wrote. Many are non-Pashtuns who were radicalized in universities.

“In terms of educational performance, a remarkable feature found in about one-third of the ISKP members interviewed is their outstanding intellectual record,” he wrote. “In addition to several professors of universities who recruited for ISKP, the presence in the Kabul cell of many ‘first-graders’ (awal-numra, those who topped their classes—usually of about thirty students—in annual rankings) and graduates gives it a distinctly elite character. A significant number of first-graders were drawn from the sharia faculty. Others came from law, chemistry, engineering, and literature departments, often in state-funded universities. Three universities contributed the largest number of recruits to ISKP’s ranks: Kabul University, Nangarhar University, and Al-Biruni University.” 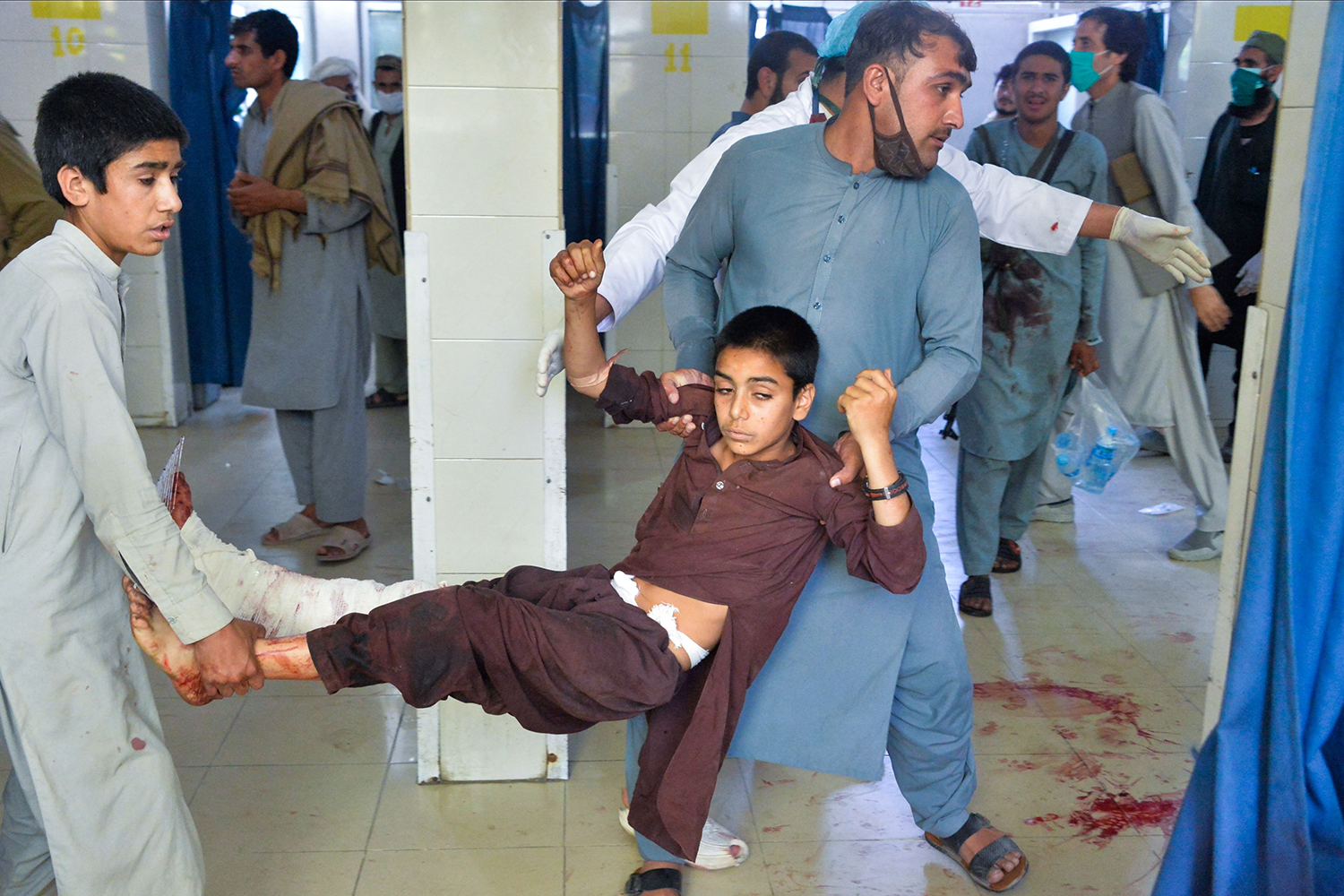 Volunteers carry an injured boy in a hospital following an attack at the funeral of a local police commander in Nangarhar, Afghanistan, on May 12. NOORULLAH SHIRZADA/AFP via Getty Images

ISKP tactics are also sowing mistrust between the two main parties to the conflict, the government and the Taliban. After the horrific attack on the maternity ward last month, the government was quick to blame the Taliban, though no group took responsibility and some analysts, like Ruttig, thought ISKP was much more likely responsible for the attack. “Obviously, the attack has ISKP fingerprints. It did not make sense from the Taliban’s view,” Ruttig said.

“The Afghan government still exploits the Islamic State threat for its own benefits. We could see this immediately after the most recent attacks when Kabul blamed the Taliban for the bloodbath and conducted new operations against them,” said Zakir Jalaly, a Kabul-based political analyst. After the attacks in Kabul and Nangarhar, President Ashraf Ghani’s government claimed that both ISKP and the Taliban were the culprits. The Taliban denied responsibility. Indeed, according to Jalaly, there is more evidence indicating that the Taliban took the fight against ISKP seriously and pushed the group back in rural sites, while the government in Kabul might have seen ISKP as a strange bedfellow in its political battle against the Taliban—which, contrary to ISKP, is the largest and most organized insurgency in the country. Until today, no group has taken responsibility for the Kabul hospital attack.

Moreover, the mere existence of ISKP is often blamed on the Taliban, and it will continue to disturb any kinds of negotiation talks and peace—or “less conflict,” as Mozhdah called it—in general.

For the moment, both the Taliban and the government are going forward with plans for negotiations, with prisoner releases underway. In a statement, the Taliban ordered “all the Mujahideen to adopt special preparatory measures for the safety of our countrymen and not to attack the enemy in any place.” Ghani’s government welcomed the announcement, accepted the truce, and also declared that it would release hundreds of Taliban prisoners imminently. Concurrently, calls from politicians and civil society activists grew louder in demanding an extension of the cease-fire and the commencement of intra-Afghan talks. Unofficially, the former already happened, but questions persist as to the durability of the goodwill of both sides, having warred against each other for two decades. During the last days, several attacks took place, including operations against Afghan security forces and at least one government airstrike causing civilian casualties.

During the last months and years, both the Afghan government and the Taliban have also regularly reported how they defeated the ISKP by clearing out whole districts. One day before the May 12 attacks, several ISKP key figures were arrested by government forces in Kabul, according to government officials. Although some former Taliban members joined ISKP, the Taliban themselves were engaged in a large-scale conflict against the group, primarily due to ideological issues, the existence of which were glossed over by those on the outside unfamiliar with Islamic polemics. “The ideological hurdle between the two groups is still very high, which also indicates that after a peace deal many Taliban fighters might not want to defect to the Islamic State,” Ruttig said. Theologically, the Islamic State is known for its foreign-imported brand of Salafi extremism, while the Taliban market themselves as native sons of the soil, as heirs of Afghanistan’s deeply rooted, centuries-old Sunni Hanafi traditionalism.

Some observers believe that overall ISKP is still a small, insignificant player in the country. But the fact remains that ISKP has not been eliminated, despite reports of more than 10,000 of its fighters being killed or captured since 2015. Generally, these have been caused by Afghan forces, U.S. airstrikes, and the Taliban. “This demonstrates incredible resiliency, to be able to consistently bring in new recruits and continue operating while losing members in such staggering numbers,” said Andrew Watkins, a senior analyst on Afghanistan at the International Crisis Group.

Estimates of the group’s membership today still put its strength in the hundreds, perhaps even 1,000 remaining members or more.

Nevertheless, there is reason to doubt those official numbers, especially those put forth by the Afghan government, which, according to many observers, has an opaque, problematic relationship with ISKP. And some analysts suggest that the Kabul government will benefit from keeping ISKP around in small numbers, using its existence to blame the Taliban for any given terrorist attack, suggesting a similar strategic relationship to the one between Bashar al-Assad’s regime and the Islamic State in Syria. Others like Watkins say such theories amount to little more than “conspiratorial thinking held together by grains of truths.” “We can’t deny that the Afghan government has at times behaved very strangely toward ISKP fighters and commanders, arresting them alive and even treating them surprisingly well in custody,” he said. “But it is important to say any comparison of Kabul’s relationship to ISKP with Assad’s regime to ISIS is strongly off base. The Afghan government has devoted considerable military resources to its campaign against ISKP in Nangarhar, at times over the last five years even implicitly taking action that would clearly benefit the Taliban in rural areas of the province.”

When it comes to the peace process, Watkins suggests that the terrorist group’s interference is mainly taking place because of ideological reasons. “ISKP has clearly grown active in direct response to the deal between the United States and the Taliban. In their own propaganda, they decried the deal, labeling it as a proof the Taliban are the ‘kafr’ and infidels they have always accused [them] of being. In the months before February, ISKP had not claimed a single incident in Kabul, but in the days leading up to the signing ceremony in Doha, the group resumed activity with a vengeance,” he said.