As protests across the United States enter their tenth day, senior U.S. military personnel have been lining up to voice their opposition to a Trump administration that has signaled its eagerness to unleash military force to put down the demonstrations.

U.S. President Donald Trump hinted on Monday that he may invoke the Insurrection Act, a two-century old law that would allow active duty military personnel to support law enforcement. It was last used in 1992 to quell riots in California in the aftermath of Rodney King’s beating by Los Angeles police.

He has been egged on by Sen. Tom Cotton of Arkansas, who published an op-ed in the New York Times online Wednesday entitled “Send In The Troops.” The piece prompted ridicule online and a rebuke from Times journalists who said the piece endangered the newspaper’s black workers.

Will the top brass force Trump to back down? Mark Milley, the Chairman of the Joint Chiefs of Staff and the most senior military advisor to Trump, issued a rare memo to the country’s armed services reminding them of their duties as well as the rights of their fellow citizens to free assembly. “We all committed our lives to the idea that is America—we will stay true to that oath and the American people,” Milley wrote in the handwritten portion of the memo.

Writing in Foreign Policy, John Allen, a retired U.S. Marine Corps four-star general and current president of the Brookings Institution also criticized calls for militarization. “Right now, the last thing the country needs—and, frankly, the U.S. military needs—is the appearance of U.S. soldiers carrying out the president’s intent by descending on American citizens. This could wreck the high regard Americans have for their military, and much more,” he wrote.

He has been joined by Trump’s previous Secretary of Defense James Mattis who issued a statement denouncing the president. “Instructions given by the military departments to our troops before the Normandy invasion reminded soldiers that ‘The Nazi slogan for destroying us … was “Divide and Conquer.” Our American answer is “In Union there is Strength.”’ We must summon that unity to surmount this crisis—confident that we are better than our politics.”

Esper on the defensive. As Foreign Policy’s Jack Detsch reports, current U.S. Secretary of Defense Mark Esper has also moved to put space between himself and the president following Trump’s hinting at invoking the Insurrection Act as well as Monday’s controversial church photo op. “The option to use active-duty forces in a law enforcement role should only be used as a matter of last resort and only in the most urgent and dire of situations. We are not in one of those situations now. I do not support invoking the Insurrection Act now,” Esper said at a news conference.

The pushback from Esper has led to speculation that he may soon be out of a job, something White House Press Secretary Kayleigh McEnany did not dismiss. “As of right now, Secretary Esper is still Secretary Esper and should the president lose faith, we will all learn about that in the future,” she said.

Is it all too much TV? Trump is known as an avid television viewer, especially of Fox News, and that could be driving his thinking. An analysis by Philip Bump of the Washington Post showed that Fox News and Fox Business has been mentioning rioting or rioters six times as much as CNN has over the past week, even as protests have been largely peaceful.

The impact of the coronavirus pandemic on the act of voting has led to a wave of cancellations and postponements across the world. Foreign Policy is keeping track of all the countries who have had their normal voting processes disrupted—see them all in greater depth here. 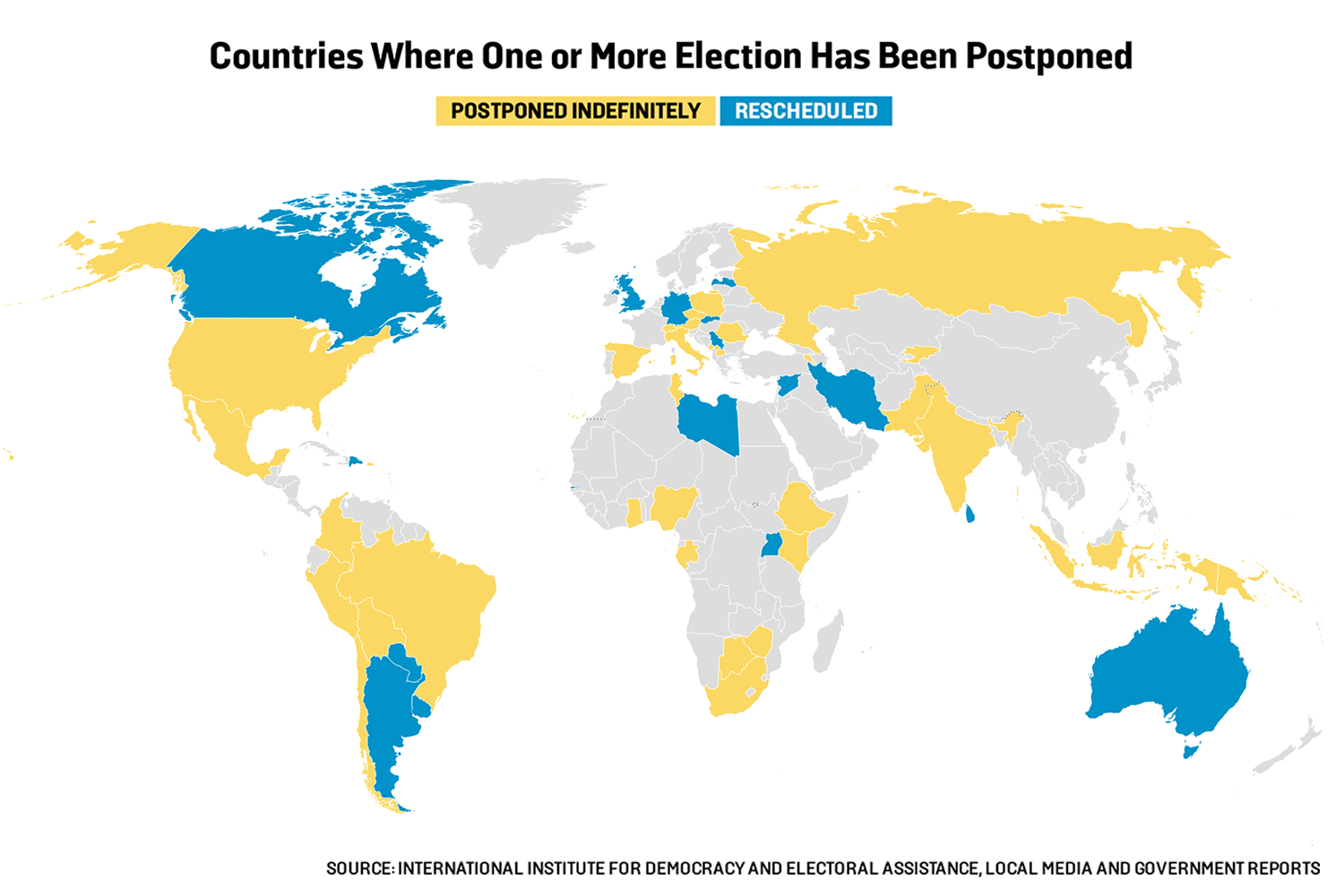 Johnson floats British citizenship for Hong Kongers. British Prime Minister Boris Johnson has voiced his government’s support for Hong Kong, offering millions of Hong Kongers the right to live and work in Britain if China imposes new national security laws on the territory. “Hong Kong succeeds because its people are free,” Johnson wrote in the Times of London. “If China proceeds, this would be in direct conflict with its obligations under the joint declaration, a legally binding treaty registered with the United Nations.”

Johnson said that his government would give roughly 3 million Hong Kongers —those holding a British National (Overseas) passport and those eligible to receive one—a path to British citizenship. The move would in theory allow those Hong Kong residents to then emigrate to the United Kingdom, potentially depriving the territory of almost half its current population.

Trump keeps G-7 door open to Russia. U.S. President Donald Trump has said it would be “common sense” to allow Russia rejoin the G-7 as it would help streamline decision making in the group. “Many of the things that we talk about are about Putin,” Trump said in a Fox News interview. “Have him in the room … get things done.” On Tuesday, EU Foreign Affairs chief Josep Borrell said that Russia should not be allowed back into the group that was once known as the G-8 until it “changes course and the environment allows for the G-8 again to have a meaningful discussion, and this is not currently the case.”

More police charged in George Floyd killing. The three Minneapolis police officers who looked on as George Floyd was suffocated by their colleague Derek Chauvin have now been charged with aiding and abetting murder. Chauvin’s initial charge has also been upgraded to second-degree murder. All four officers were already fired for their involvement in Floyd’s death.

Gambia calls for investigation of police killing. Gambia has demanded an investigation into the killing of the son of one of its U.S.-based diplomats by police officers in the state of Georgia. Momodou Lamin Sisay, the son of Gambian U.N. diplomat Lare Sisay was shot to death by a police SWAT team following a car chase last Friday. The Georgia Bureau of Investigation said that Sisay initially fired on police. Gambia’s embassy in Washington has been asked by the country’s Ministry of Foreign Affairs to “engage the relevant U.S. authorities including the State Department to seek transparent, credible and objective investigation.”

Hoti takes over as prime minister in Kosovo. Kosovo has voted in a new government following the dismissal of Albin Kurti’s government in March by a no confidence vote. New Prime Minister Avdullah Hoti has promised to resume dialogue with Serbia and begin removing tariffs it had imposed on its neighbor. If a deal for mutual recognition can be reached between the two countries, it would pave the way for Serbia to begin accession talks with the European Union.

Minimum income. Pablo Iglesias, Spain’s deputy prime minister for social rights has joined with the labor ministers of Italy and Portugal to call for a EU-wide minimum income program, to shelter citizens from the worst of Europe’s economic downturn. In contrast to a Universal Basic Income, the minimum income plan would merely top up wages of underpaid workers until it met a desired threshold. Spain has just embarked on its own version of the program this week, and plans to spend $3 billion annually to supplement the incomes of 850,000 households.

Siberian oil spill. Russia has declared a state of emergency in the city of Norilsk, in Siberia, following a power plant oil spill that has leaked more than 22,000 tons of oil into a nearby river. It is believed to be the second largest spill by volume in the nation’s history and has contaminated an area of 135 square miles. The spill occurred after a fuel tank, whose foundations were sinking due to melting permafrost, collapsed. Russian President Vladimir Putin publicly berated the head of the company responsible for the spill, after it failed to notify government agencies for two days.

A member of the European parliament has been caught without pants in a recent parliamentary appearance. Luke “Ming” Flanagan, MEP for Ireland’s Midlands–North-West, was joining the parliament by video chat to discuss agricultural policy, and footage shows the politician revealing more of himself than is usually considered appropriate in the halls of Strasbourg. Flanagan defended his appearance, saying he had just come indoors from a run, hadn’t time to change out of his running shorts, and didn’t realize his iPad camera settings showed him below the waist. He has faced the blunder in good humor, “Who could have known that my legs would be so popular. Should I get them insured?” he wrote on Twitter.

NEW FOR SUBSCRIBERS: Want to read more on this topic or region? Click + to receive email alerts when new stories are published on United States, Hong Kong