How High Will the U.S. Unemployment Rate Go?

As officials announce the latest monthly unemployment report and the stock market continues to rise, economists debate whether the worst has passed.

How Many More Jobs Will Be Lost?

How Many More Jobs Will Be Lost?

At 8:30 a.m. Washington time, the U.S. Bureau of Labor Statistics will release nationwide unemployment figures for the month of May. With 1.9 million workers filing for unemployment last week (making it 42.6 million jobless claims since the pandemic began), how high can the U.S. unemployment rate climb?

Figures released by ADP on Wednesday, seem to suggest that this month’s report will be less catastrophic than the 20.5 million jobs lost in April, but will still number in the millions. The ADP report forecast 2.76 million job losses, only about a third of the losses some economists have predicted.

Even with fewer Americans losing jobs, the employment situation is still dire. The White House is planning a $1 trillion remedy, according to Bloomberg, but such stimulus is not expected to come soon. Senate Majority Leader Mitch McConnell has said he doesn’t plan to take up any stimulus bill before the Senate’s three-week break on July 3, meaning any action wouldn’t take place until at least July 20.

Europe’s other path revealed. The European Union’s slower method of gathering figures meant that a fuller comparison to the United States only became possible on Wednesday, when the EU released unemployment figures for the month of April. A policy of wage subsidies seems to have kept workers in jobs: The EU unemployment rate only increased to 6.6 percent in April compared to 6.4 percent in March. The increase was slight compared to the United States, where March’s 4.4 percent unemployment rate surged to 14.7 percent rate in April.

If the U.S. economy is hemorrhaging jobs, why is the stock market up? On May 29, FP asked leading experts to explain the recent rally, which appeared to slow on Thursday. “What is driving markets is a bet investors believe they can’t lose: They win if … the economy quickly returns to normal; they also win if it doesn’t, given that the U.S. Federal Reserve has repeatedly demonstrated that it is both willing and able to backstop markets. After all, what is more reassuring than a buyer with a seemingly endless appetite and a money-printing press to boot?” Mohamed A. El-Erian, chief economic advisor at Allianz, wrote.

With its effect on tourism and travel, the pandemic has potentially disrupted a key source of revenue for some of the world’s wealthiest nations. Italy has tried to avert the sort of economic catastrophe that Giorgio Ghiglione warned about in Foreign Policy last month. The country reopened its borders to tourists on Wednesday. In April, FP looked at the countries with the most to lose from a drop in tourism spending. 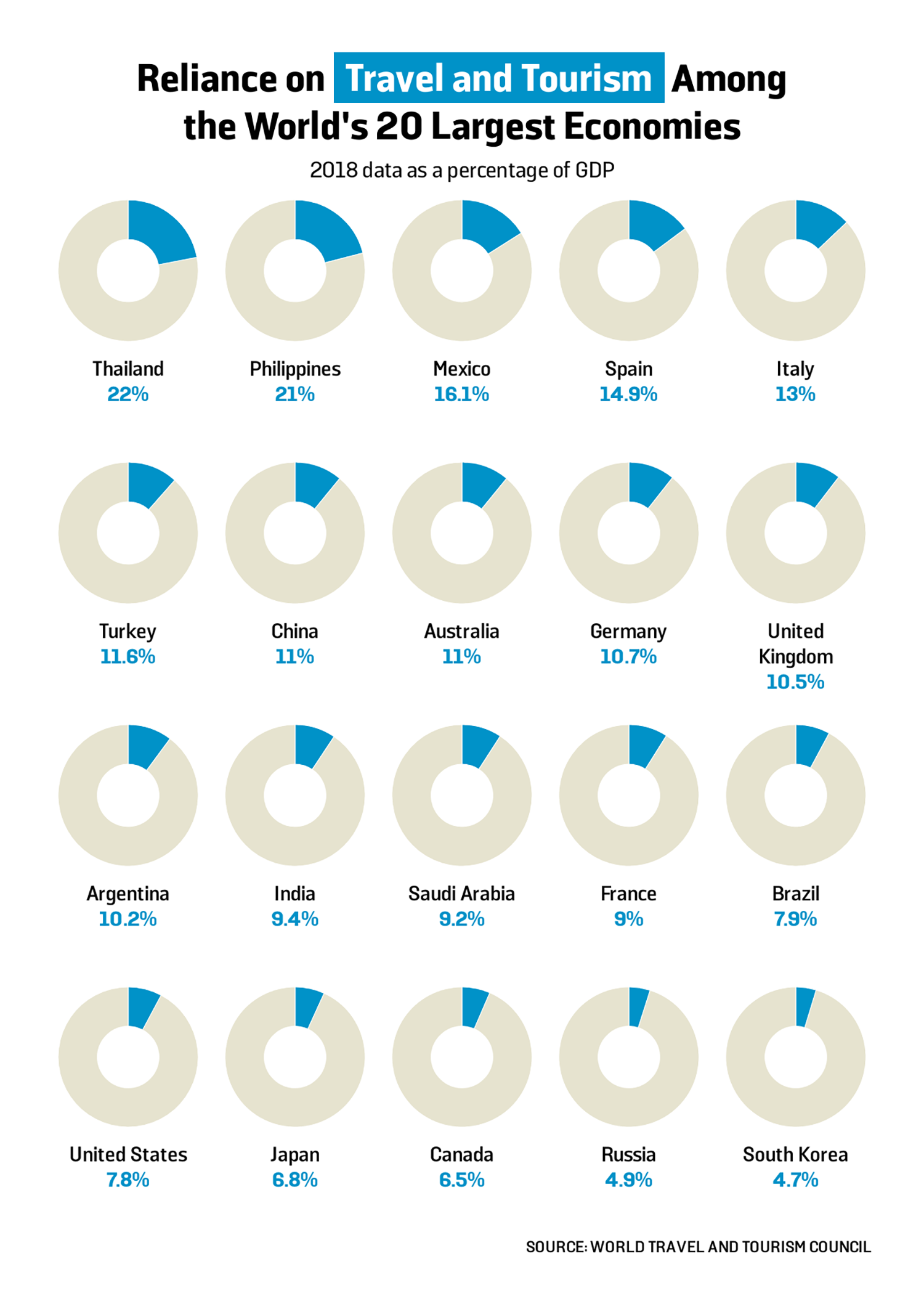 ECB spending. The European Central Bank will inject a further 600 billion euros ($675 billion) into Eurozone economies by expanding its bond-buying program. The bank has also decided to keep interest rates at zero until inflation reaches the 2 percent mark. At a press conference on Thursday, ECB chief Christine Lagarde did not rule out further action. “In the current rapidly evolving economic environment, the governing council remains fully committed to doing everything necessary within its mandate,” she said.

U.S. and Iran complete prisoner swap. Michael White, a U.S. Navy veteran, has been released from custody in Iran as part of a deal that freed an American-Iranian physician convicted of breaking U.S. sanctions on Iran. White had been sentenced to ten years in prison for insulting Iran’s supreme leader on social media while in the country and served 683 days of his sentence. He had been temporarily released on medical furlough in March and is recovering from a COVID-19 infection. White’s return comes a day after Iranian scientist Sirous Asgari was deported to Iran after being held for months by U.S. immigration authorities.

Tripoli siege ends. Forces loyal to Khalifa Haftar have retreated from Tripoli, ending a 14-month siege of the city as peace talks between Haftar’s Libyan National Army (LNA) and the internationally-recognized Government of National Accord (GNA) loom. The extent of the LNA retreat will depend on Russian support—the United States revealed Russia was providing fighter jet assistance to the LNA in May. Meanwhile, Turkey has said it would increase its support for the GNA while also backing U.N. peace talks. During a Thursday visit by GNA leader Fayez al-Serraj, Turkish President Recep Tayyip Erdogan also announced that both countries would explore oil drilling opportunities in the Eastern Mediterranean.

Tiananmen remembrance. A crowd of thousands gathered in Hong Kong’s Victoria Park  yesterday to commemorate the 31st anniversary of the bloody crackdown on protesters in Tiananmen Square. Later in the day, some protesters were pepper-sprayed by police during an attempt to disperse gatherings in the Mong Kok area. Hong Kong police had officially banned mass gatherings citing coronavirus fears. “We are afraid this will be the last time we can have a ceremony but Hong Kongers will always remember what happened on June 4,” one protester told Reuters.

Iran’s second wave. Iran appears to be dealing with a second coronavirus wave as the number of daily cases rose above March’s initial peak. Iranian authorities hope the increased number of cases is down to a higher testing rate, as the number of deaths has not risen at the same time. Iran has moved to reopen much of its society in recent weeks, and opened its border with Turkey to truck traffic on Thursday.

EU denounces Venezuela’s changing leadership. The European Union has refused to recognize the Venezuelan Supreme Court’s decision in late May to authorize Luis Parra, an ally of President Nicolás Maduro, as the new president of the National Assembly. “The EU considers that the voting session that led to the ‘election’ of Luis Parra was not legitimate … The EU continues to fully support Juan Guaidó as president of the National Assembly,” the statement said. Despite the brinksmanship, there has been some recent cooperation between Maduro and Guaidó as the two signed an agreement to cooperate on fundraising for the country’s coronavirus epidemic on Wednesday.

An Australian man has made global headlines for his response to Prime Minister Scott Morrison’s media appearance outside his house at a new housing development. The homeowner, who has not been identified, came out of his house in Googong, New South Wales, as Morrison was being interviewed to firmly tell the Australian leader and the media scrum to get off his lawn. The outburst may have been due to the political nature of Morrison’s presence (although he currently enjoys a 65 percent approval rating), but was more likely the dramatics of a protective gardener. “Hey guys, I’ve just reseeded that,” the man shouted before he closed his front door.

For more from FP, visit foreignpolicy.com, subscribe here, or sign up for our other newsletters. Send your tips, comments, questions, or corrections to morningbrief@foreignpolicy.com

NEW FOR SUBSCRIBERS: Want to read more on this topic or region? Click + to receive email alerts when new stories are published on Hong Kong