For months, the coronavirus pandemic monopolized headlines around the world—until George Floyd, a black man, was killed by a white police officer in Minneapolis. Cities across the United States erupted in protest, and the world looked on in shock as peaceful protesters were met with police violence. In Washington, D.C., tear gas and rubber pellets were reportedly used to disperse crowds in front of the White House so that U.S. President Donald Trump could walk to a church across the street for a photo opportunity.

As solidarity protests against racism and police violence spring up across the world, Foreign Policy spoke to six foreign correspondents based in the United States to ask them how the killing of Floyd, the nationwide protests and rioting that resulted, and Trump’s response have been viewed in their home countries. The following interviews have been lightly edited for clarity and brevity. 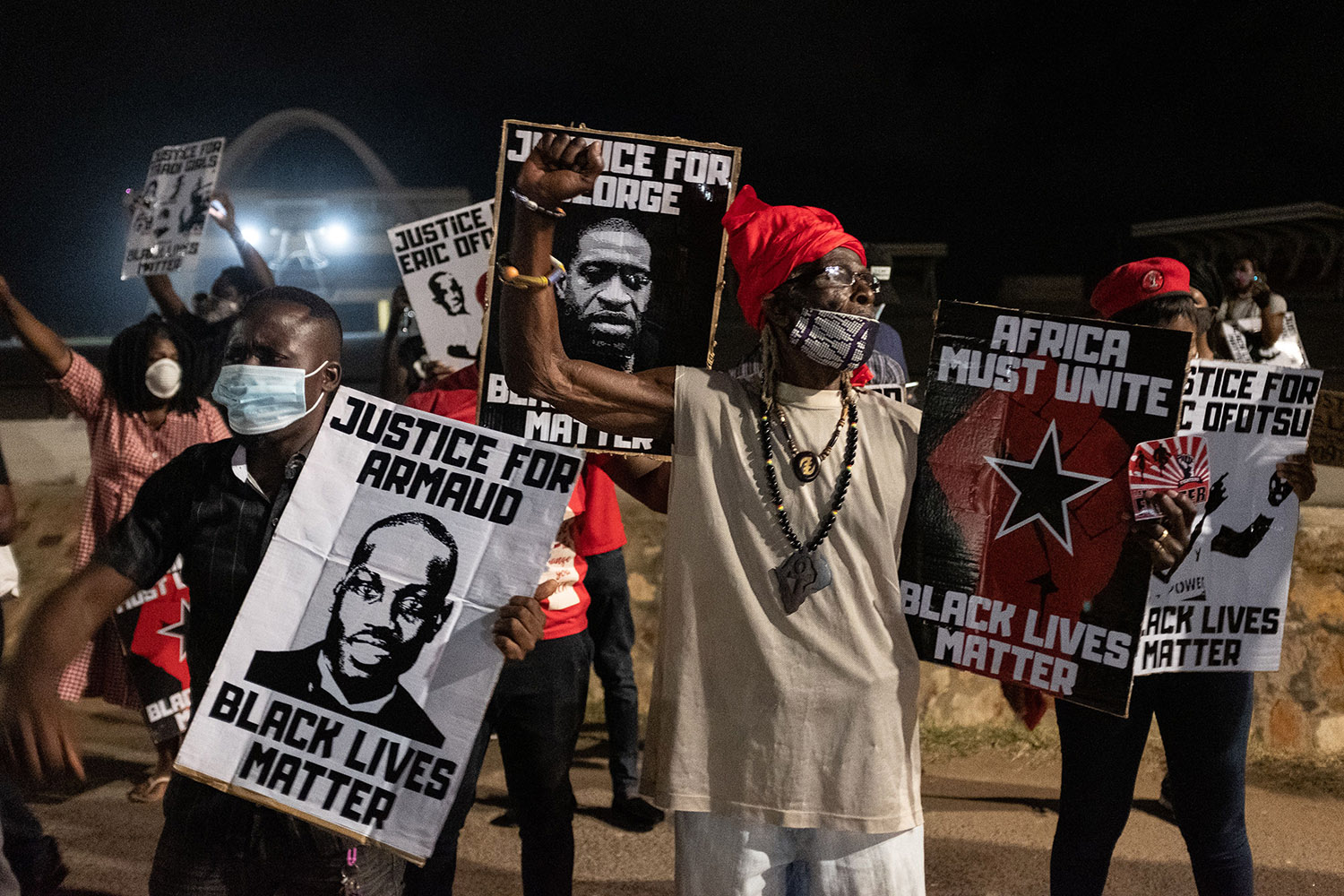 Activists raise their fists in Accra, Ghana, on June 6 amid global protests against racism and police brutality. NIPAH DENNIS/AFP via Getty Images

The reaction in Ghana has been overwhelming. I think this is one moment, probably besides the election of President Barack Obama, where we have seen African leaders rise up to speak out, especially on matters related to the United States. The African Union issued a strong message condemning what happened and calling it murder even before charges were even brought against the suspects. We’ve seen individual heads of state issue statements; we’ve seen pockets of protests in the major cities in Africa. In the last several decades, this is one incident that has triggered not just the anger but also great interest and attention from the African continent.

Often, especially across Africa, the history of racism is not really taught. From kindergarten to university in Ghana, I was never taught it. We had social studies, but any social studies that you have, especially in high school, were mostly about the history of the United States, and it was glamorous, [about] greatness. We did not talk about the role played by slavery, by Jim Crow. You never hear about those until you take initiative to read and to study it. A lot of people come from the perspective that the United States is a wonderland, the United States is a utopia. Incidents like this have shed true light on that systemic failing.

The Russian media, the propaganda, they’re being very careful because they are very, very scared. President Vladimir Putin is very scared of any sort of massive unrest. He has always been, from the Arab Spring to the Maidan [protests in Ukraine]. So as much as they would love to inflame that or highlight that or mock that, they are very careful because they don’t want the same to happen in Russia, massive protests and unrest, so they are being very cautious to not give them too much credit. As for the independent media, there is not so much coverage, honestly. I’m probably one of the journalists that covers this the most. With these protests, it became clear that not only Russian Putinists but also a huge portion of Russian liberals are simply racist. With my own eyes, I’ve seen posts and texts calling for a military crackdown on these “thugs” who “loot.” So that’s where I try and I try and I struggle and struggle to explain to my Russian audience that there are two different groups of people, the protesters and the looters. But Russians, my liberal colleagues and friends, they proved to be totally racist.

I was shocked to hear that from Russians, especially liberal Russians who know how brutal police can be because we’ve been there. It’s insane that liberal Russians are now calling for more crackdowns (in the United States), for more military, for an immediate stop of this unrest, protests, and looting. They say they feel bad that these shop windows have been broken. Why do you care that the windows of the Nike store have been broken? I mean it’s horrible, yes, but it’s not irreversible. You just fix that. But you cannot bring George Floyd back to life. 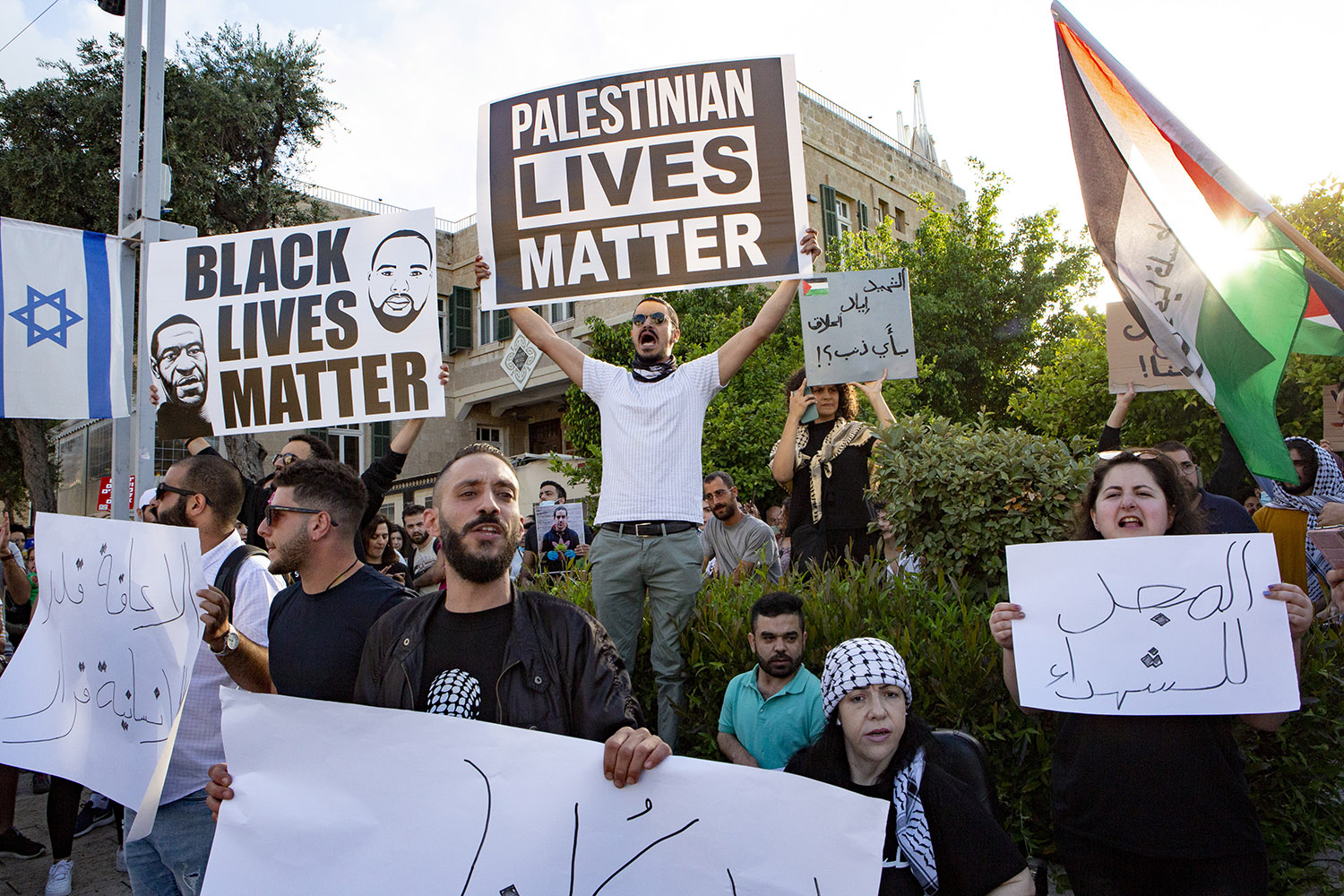 Hundreds of Palestinian citizens of Israel protest in the city of Haifa, Israel, on June 2 against the Israeli police killing of an unarmed autistic Palestinian man just days earlier, tying the incident to the police killing of George Floyd in the United States. Mati Milstein/NurPhoto via Getty Images

The protests have been widely covered in Israel. We had our own very sad incident that happened in Jerusalem over the weekend where a Palestinian man who was autistic was shot by police officers. The similarities for many people were very worthy of discussion. In our newspaper, which has a more liberal, left-wing editorial stance, there was criticism of the fact that in America you have these huge protests whereas in our country these gruesome killings take place and there are far fewer protests and much less anger in the streets.

With the Trump administration, nobody really takes them seriously on the issue of democracy and human rights anyway—they don’t seem to care. But of course, this is going to make it even more clear that they are not in a position to preach to anyone. I think the real issue here is how does that impact the moral struggle that does exist against countries like China or in our region, like Iran, countries that are brutal dictatorships. It’s important to have some kind of moral stand against them, in my opinion at least. How can you preach about democracy when these kinds of things happen?

Israel is a country that is so close to the United States and so reliant on it for some issues. So obviously if America loses its influence in the world, that’s not a good thing for Israel. I think America’s military and economic influence is not going away anytime soon. But there has always been a political dimension to it, even a philosophical one with some administrations. And I don’t think that’s going to survive if this kind of behavior continues. And I have to say the level of division here among the American people is something that I try to write about quite often. It’s a very fractured society, and that’s in itself a larger story that I try to highlight in the context of these demonstrations.

Joyce Karam, Washington correspondent for the UAE-based newspaper The National

There’s a lot of interest in this story in the Middle East. We’re trying to get as much ground coverage as we can, talk to organizers, talk to protesters at or near Lafayette Park [in front of the White House]. There have been a lot of parallels between what is happening here to the Middle East, to the Arab Spring, but we’re trying to show why this is different. Emphasize the racial aspects of the story, the history of racism in the United States.

It’s not easy. How do you go about explaining the whole history that I’m personally not expert in? But you just try to bring in as many voices. At the protests, I try to speak to people of all colors, tell their story. What does justice mean? What do they want? We did a short live [shot] from U Street explaining how the same areas saw riots in the 1960s. But it’s a big challenge. The story is huge. It’s one of the most complex and biggest stories of the decade. Our most-read articles are about George Floyd. So there is high interest. We’re trying to bring a different set of views and not just make this about President Donald Trump and the military.

For audiences watching from abroad, from the Middle East, there is an element of shock at photos of bearcat vehicles and the heavy military presence in D.C. At the same time, we try to convey that there have been no killings in the protests, that mostly it’s been peaceful and this is not like the Middle East. But the imagery that’s coming from here—yes, I think it does undermine U.S. efforts, whether it’s supporting protests in Hong Kong or Iran or elsewhere in the Middle East. 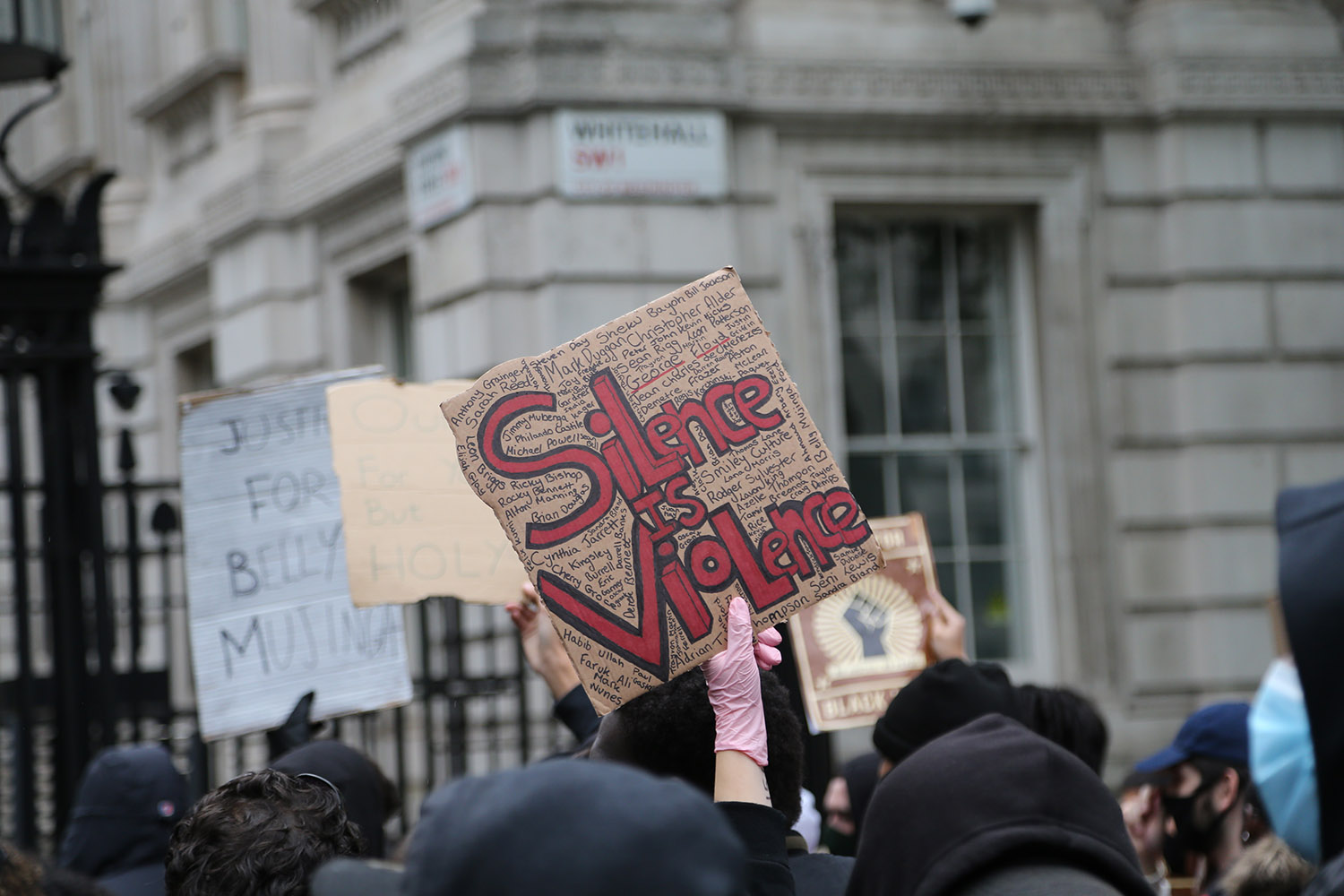 A demonstrator holds a sign reading “Silence Is Violence” during a protest in solidarity with U.S. anti-racism demonstrations outside Downing Street in London on June 7. Ilyas Tayfun Salci/Anadolu Agency via Getty Images

I think normally my job is doing a lot of explaining, you know, seeking to understand America myself and then trying to relate that in a way that’s going to make sense and not get too deep into the weeds of stuff over here, because you really gotta paint a broad picture for people in another country. I write for a Sunday paper, specifically the Sunday Times, so for me I’m always trying to sort of take a little bit of a step back from just daily reporting. At the beginning of the week, I was like, OK, so we’ve got this issue with police in America. But what can we say about it a little bit under the surface? So I went down to Camden, New Jersey. It’s widely considered to be the police force in America that has really turned things around and made huge progress over the last few years. It’s by no means perfect, but they’ve made a lot of progress there. And so I went for a ride-along with some of the police. I chatted to some local business owners to try to get a sense of how this might change things. If this is a movement for change and people are calling for help from the police, what might be done to make things better? I was trying to get something a little bit more than: “At today’s protest, 200 people were arrested.”

We had all the top executives of the companies that own the newspaper arrange a call, in which they invited some of the correspondents in the United States to join because they wanted a kind of on-the-ground briefing about what we were saying and what we thought about everything. That was very, very unusual. In fact, I don’t know that that has ever happened before. So it sort of illustrates how interested people are and how alive to it they are.

People are saying to me, “Why are you still there if it’s not safe to walk on the streets? You say you want to take a walk in the morning and you may be vulnerable or suspicious because of the way you look.” This is very unfortunate because America is known [in Nigeria] as a free land. I am worried about my safety. I feel very worried about my kid’s safety and my family.

I tell a lot of people that so many people don’t know how people outside of America look at America. People actually think that America is the best, most perfect country in the entire world. And I’m talking in general about the entire African continent. People will tell you, “If I die, please take my body, dead body, to America and bury it there.” Just for the comfort. People of African descent love America so much because they believe you can freely express yourself and you are protected by the laws of the land. When this happened, it was a big disappointment.

Since 9/11, federal funding for counterintelligence has shifted the way New York and other cities are policed.

How Trump’s response to both endangers U.S. national security.

In a letter, more than 200 former senior diplomats and military leaders say there is “no role” for the U.S. military to deal with protesters exercising free speech rights.