Why Not to Trust That Early Wuhan Study

Harvard research cited by Trump suggests the coronavirus was spreading as early as last August. The cherry-picked data isn’t peer-reviewed.

Welcome to Foreign Policy’s weekly China Brief. The highlights this week: An unreviewed draft study about the timeline of the coronavirus could undermine more serious allegations against Beijing, the European Union pushes back on China over its aggressive diplomacy, and cities rebuke a call to make street vendors a part of economic recovery.

Welcome to Foreign Policy’s weekly China Brief. The highlights this week: An unreviewed draft study about the timeline of the coronavirus could undermine more serious allegations against Beijing, the European Union pushes back on China over its aggressive diplomacy, and cities rebuke a call to make street vendors a part of economic recovery.

An unreviewed early draft of a study—known as a preprint—from Harvard Medical School researchers with data that suggests that the coronavirus may have been spreading in Wuhan, China, as early as August 2019 received widespread media coverage this week. U.S. President Donald Trump and others keen to blame the pandemic on China have seized on the draft paper. But as numerous analysts have pointed out, the preprint has serious problems—including cherry-picking data.

The Harvard study indicated that there had been a rise for certain search terms associated with COVID-19 in August. But other researchers were unable to reproduce the results on the Baidu search engine using the most commonly used Chinese terms for “cough” and “diarrhea.” And there was no rise in searches for “pneumonia” or “flu” in the same time frame. The Harvard study also cites data on an increase in parked cars at Wuhan hospitals, but that appears in at least one instance to be a result of construction blocking visual access the year before.

Furthermore, given the reproduction rate of the virus and the lack of restrictions until late January, the number of victims in Wuhan would have been much higher had it emerged last August.

Sketchy claims. It is not unusual for the media to pick up on scientific preprints only for some claims to be rolled back after further review—without journalists following up on the retractions. But the Harvard study follows a concerted effort by the Trump administration to promote the idea that China was aware of the pandemic well before January. So far that effort has included a nonsensical paper by Pentagon contractors, a barely researched dossier promoted as an intelligence document, and selective leaks to the press.

That push has diminished as uprisings against police brutality consume the Trump administration’s attention. After all, the chance of a 2020 reelection campaign focused entirely on China seems smaller than it did last month. But serious charges against China’s coronavirus response—that the state wasted critical weeks in January concealing information about transmission, initially reacted with oppression, and has obfuscated any investigation—are lost amid the false claims.

EU pushes back on Beijing. China’s aggressive diplomacy in Europe is now causing serious pushback. The European Union, normally reluctant to speak out against Beijing, has accused the government of running “targeted influence operations and disinformation campaigns in the EU, its neighborhood, and globally,” along with Russia. The move may be a response to earlier criticism that the EU softened a report on the same topic.

Meanwhile, Britain’s swerve away from China has been fast, with Prime Minister Boris Johnson proposing a D-10 alliance of democracies—the existing G-7, plus South Korea, India, and Australia—to build 5G networks free of Chinese influence. The Hong Kong crisis has further soured U.K.-Chinese relations, with Beijing warning that it may pull out a British nuclear power construction deal. Since the original nuclear deal was widely seen as a disaster in the U.K., this doesn’t give Beijing much leverage.

Skirmishes with India. Despite diplomatic efforts, Chinese and Indian soldiers are still scuffling along the Himalayan border, and both countries’ nationalist media outlets are having a field day. It follows a predictable cycle: The Global Times and other papers in China produce stories targeted at insulting India, knowing that they’ll be picked up by Indian media—thus allowing the editors in China to boast of their impact to their bosses.

The drawdown of forces may ease the conflict, but as Anik Joshi writes in Foreign Policy, it looks as though India is ready to choose sides against China in any future conflict—just as China and the United States rattle their sabers and strengthen their presence in the Pacific.

Kaohsiung’s mayoral recall. In another blow to the pro-China Kuomintang (KMT) in Taiwan, voters in the city of Kaohsiung have ousted the party’s failed presidential candidate Han Kuo-yu as mayor. After a meteoric rise that was compared to Trump’s, Han once seemed like a serious challenger to the incumbent president, Tsai Ing-wen. But a series of scandals over his ties to China and the impact of repression in Hong Kong on Taiwanese voters led to a crushing defeat in January. The KMT is trying to shake off its image as subservient to Beijing, while China has made aggressive moves toward Taiwan.

Street stall battle. Chinese cities are pushing back against an initiative led by Premier Li Keqiang to make street vendors a critical part of the country’s economic recovery. Li praised street vendors on June 1, saying the government would give them support. But municipalities are traditionally hostile to street vendors. They are often targets of the chengguan—the urban security forces who bully, beat, and demand bribes from vendors.

In particular, metropolises like Beijing and Shanghai have long striven to reduce the number of rural migrants, who run most street stalls, in order to keep superior urban public services exclusive to the urban middle classes and to preserve an image as modern cities. Days after Li’s comments, which were not accompanied by formal policies, Beijing vendors who believed they would now be protected were driven off the streets.

Suspicious apps. Amid the rising border tensions, an Indian-made app that targeted and removed Chinese-made mobile apps went viral last week before being removed from the Google Play Store. But Indian users have organized to suggest alternatives to Chinese-made apps out of rising nationalist sentiments and fears of Chinese surveillance. Four out the five top smartphone brands in India are Chinese, and they normally come prepackaged with a suite of apps.

Oil recovery. Some data indicates that the speed of economic recovery in China may be faster than feared, with oil use already back to 90 percent of pre-coronavirus levels. Domestic demand for consumer goods is strong, but a lack of global demand is hamstringing Chinese manufacturers: Reopened factories are struggling to find customers. 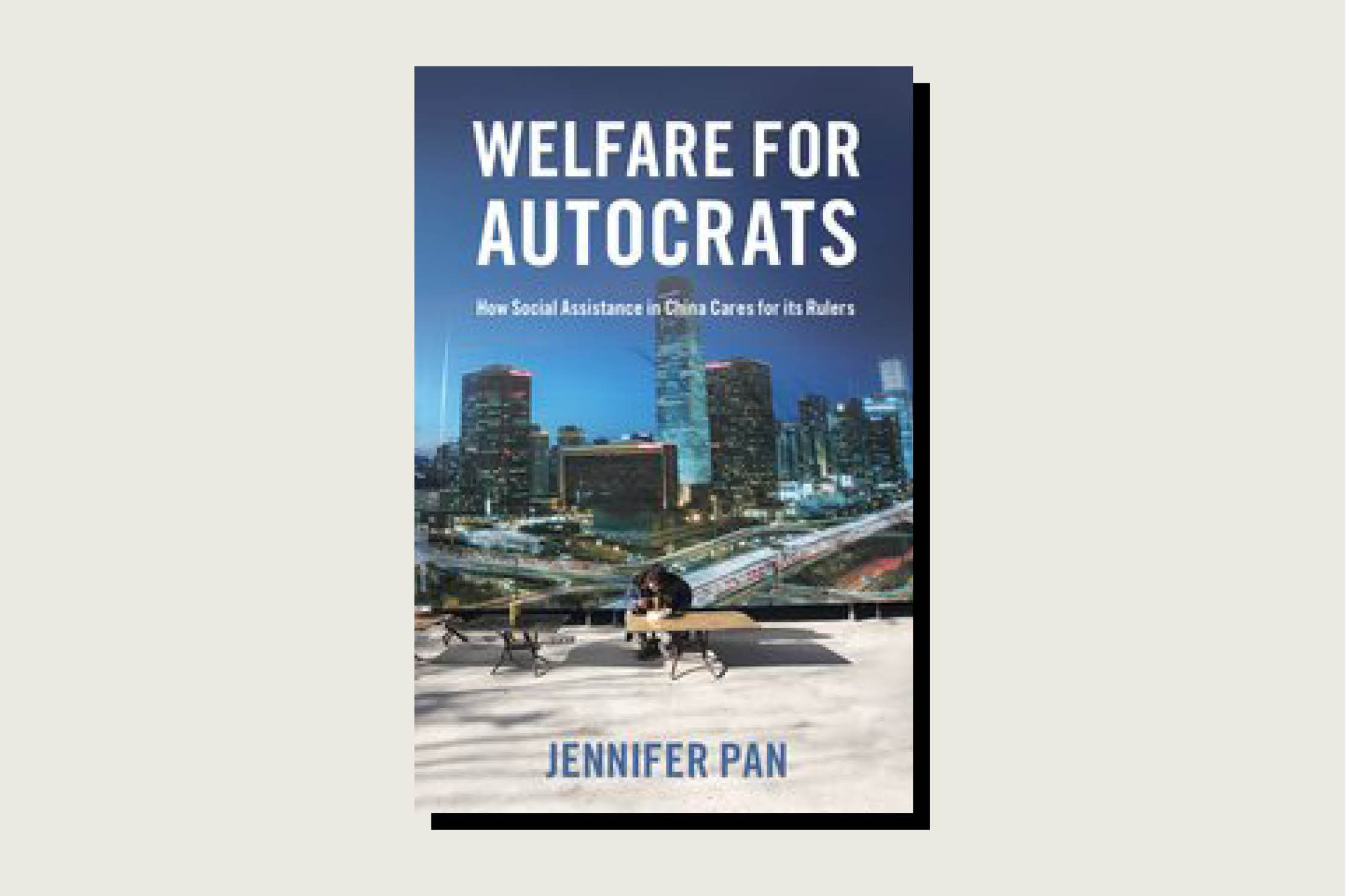 Welfare for Autocrats: How Social Assistance in China Cares for its Rulers, Jennifer Pan, Oxford University Press, May 2020, 248 pp.

Welfare for Autocrats: How Social Assistance in China Cares for Its Rulers, by Jennifer Pan

Xi Jinping’s China has made a big push to alleviate poverty while doubling down on repression and colonial atrocities. But as Jennifer Pan shows in this important study, the two are connected: Dibao, a minimum-income program that is China’s main poverty relief tool, is another means for the government to surveil and control the population.

Pan demonstrates how the state obsession with control shifts funding priorities elsewhere, such as demanding that rural residents be fully integrated into security systems, creating models that reinforce and layer oppression.

NEW FOR SUBSCRIBERS: Want to read more on this topic or region? Click + to receive email alerts when new stories are published on Politics, Health, Science and Technology, China