In Cambodia, a Spiritual Army Battles an Earthly Pandemic

With little faith in the government’s coronavirus response, many rural Cambodians are turning to the divine.

PHNOM PENH, Cambodia—A scarecrow army has quietly amassed in Cambodia. Some soldiers smile from coarse burlap faces, while others bare fangs—with many bearing plastic guns tied to their wooden arms. Their enemy haunts the streets at night, unbound to a physical dimension, intending to possess humans and spread disease. If these maleficent spirits see a scarecrow holding vigil in front of a home, they will not be able to enter, or so goes the belief.

PHNOM PENH, Cambodia—A scarecrow army has quietly amassed in Cambodia. Some soldiers smile from coarse burlap faces, while others bare fangs—with many bearing plastic guns tied to their wooden arms. Their enemy haunts the streets at night, unbound to a physical dimension, intending to possess humans and spread disease. If these maleficent spirits see a scarecrow holding vigil in front of a home, they will not be able to enter, or so goes the belief.

The scarecrows are known as ting mong, and while they’re regularly seen across Cambodia, they haven’t been as omnipresent since the fall of the brutal Khmer Rouge regime in 1979. That year, according to the recollections of older Cambodians, people made effigies of Khmer Rouge soldiers, trapping their spirits inside scarecrows that were then burned in mass bonfires. In alternative tellings of this story, a disease spread throughout the provinces that year, associated with the dead cadres, and scarecrows were erected to banish it. The tradition has carried through generations, remerging in full force in response to the coronavirus pandemic. 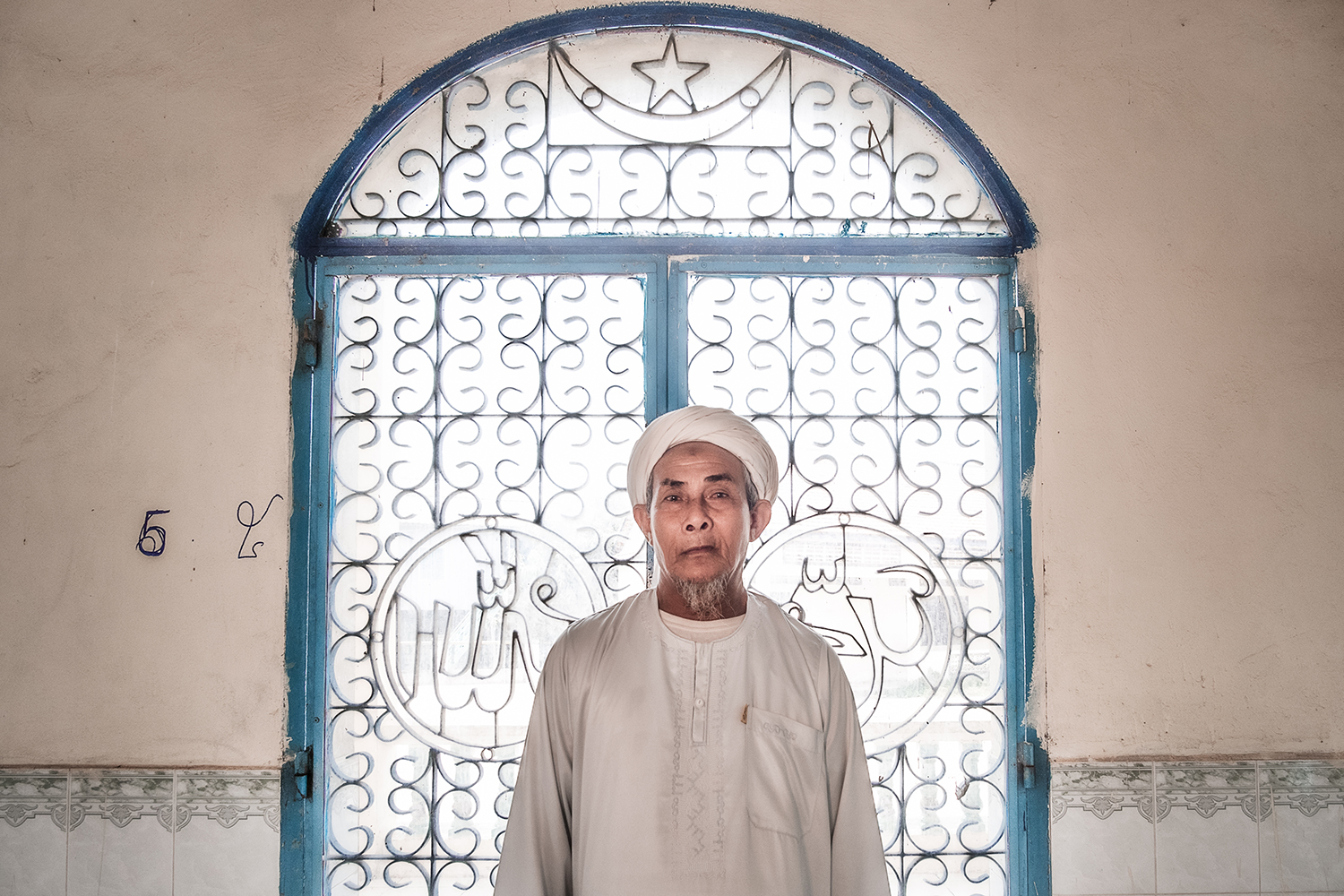 Hachi Kasem, 69, a mosque caretaker, stands inside the Naim Mosque in the Baren Kraom village of Kandal province on April 5. The mosque serves the minority Cham community in Saang district and has been closed to women since the coronavirus outbreak. 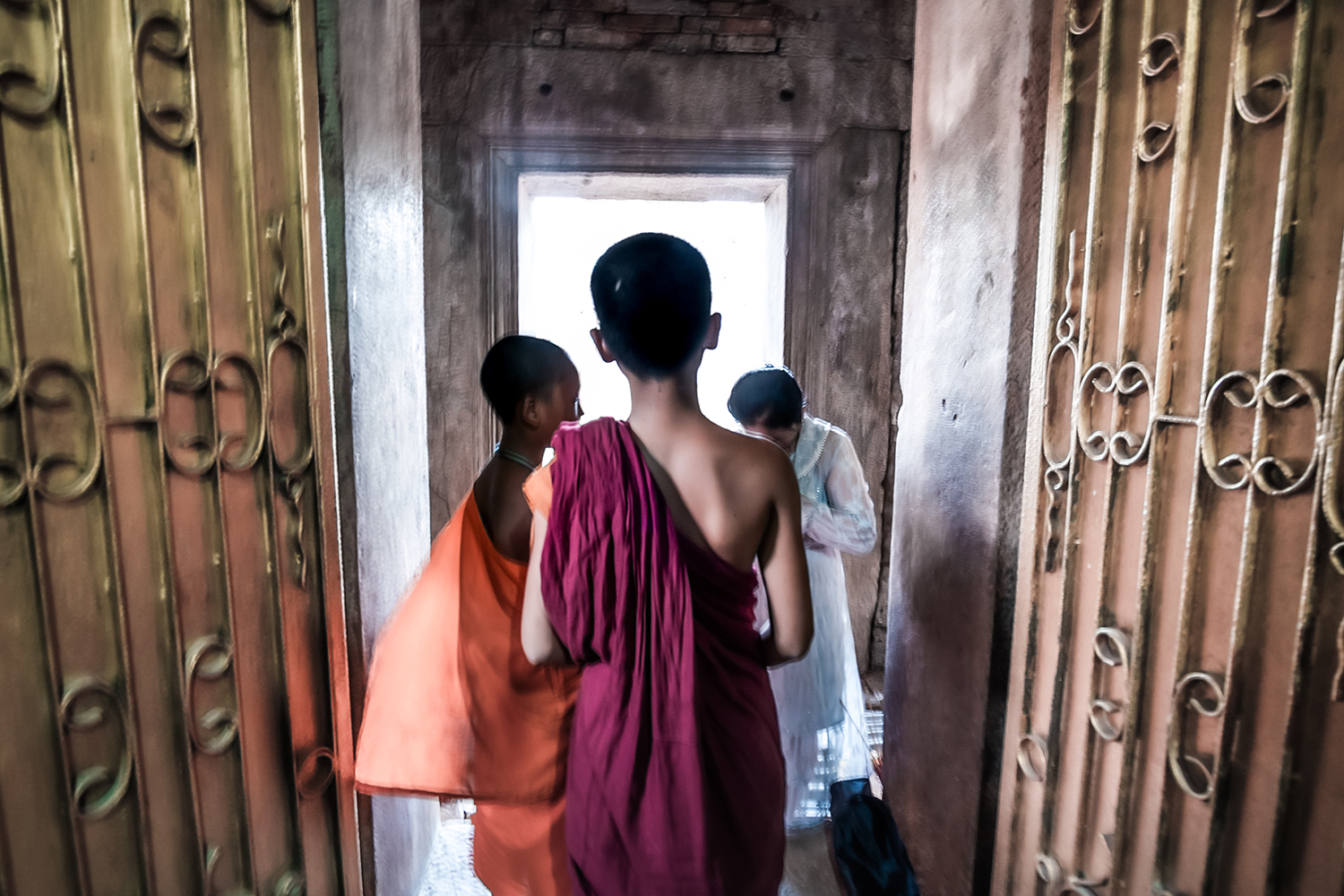 A family visits a young monk living in a monastery on Phnom Chisor for a blessing on April 5, while another monk looks on. Jade Sacker for Foreign Policy

Cambodia has among the lowest number of cases of the coronavirus in Southeast Asia. But there are uncorroborated reports of rampant coronavirus-related deaths in the countryside, and there’s a distinct sense that the government has done far too little to prevent the spread of the virus. Cambodia kept flights from China open long after its neighbors shut off international travel, and in February it permitted a cruise ship filled with potentially infected tourists (that had been turned away from numerous countries) to dock in the port city of Sihanoukville. A joint military exercise with the Chinese army was allowed to continue on March 15. The government has gone after those who criticized its response, arresting dozens of people, including a number of opposition activists, on allegations of spreading fake news. 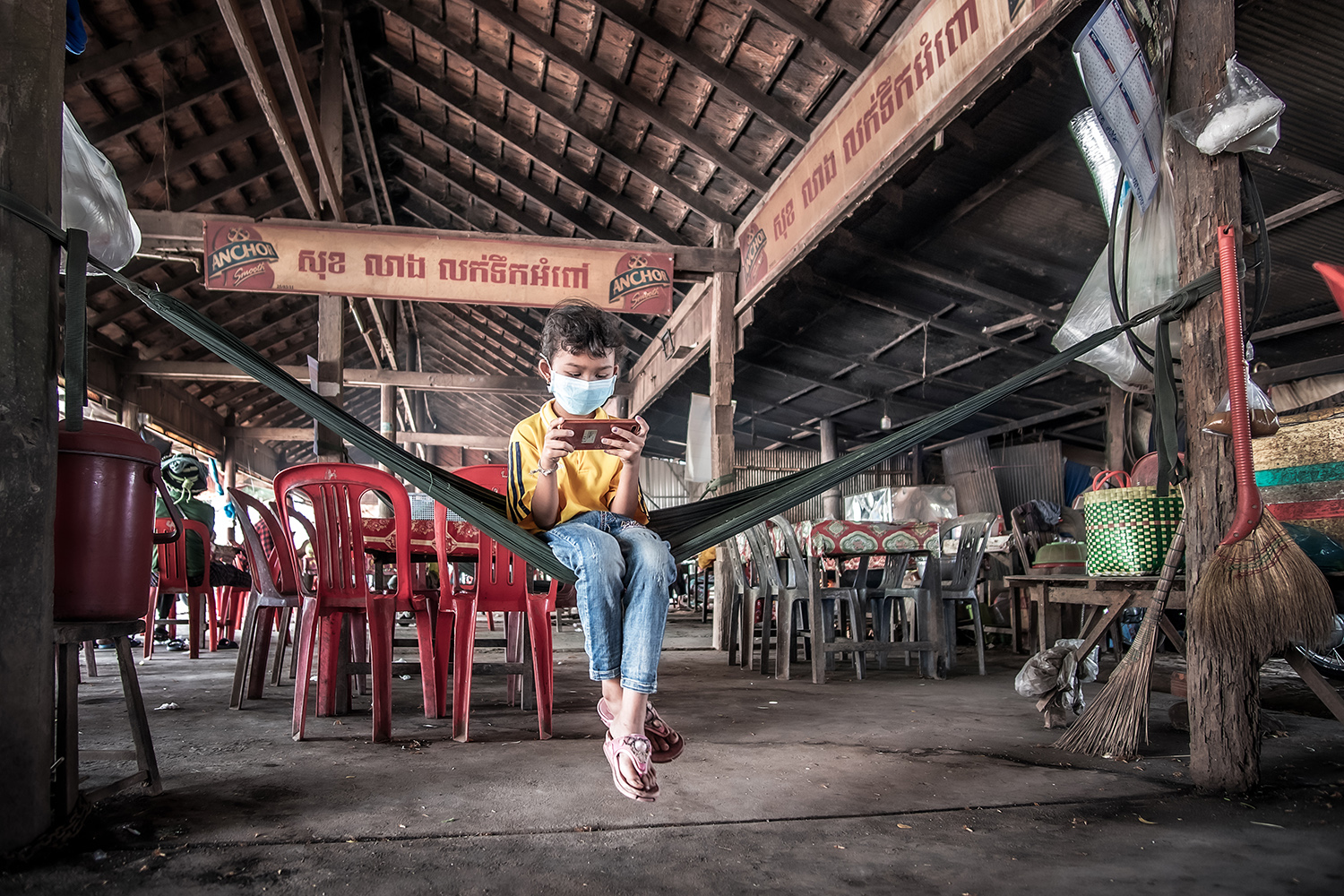 A child wears a face mask for protection from the coronavirus at a riverside restaurant along the Bassac River in Saang district, Kandal province, Cambodia, on April 5. Jade Sacker for Foreign Policy

Despite the ostensibly low rate of infections, the coronavirus has imparted a devastating blow to Cambodia’s economy, creating a crisis for the country’s most financially vulnerable. The critical tourism industry has been all but eviscerated, hurting small businesses around the country. Migrant workers who send remittances from Thailand, Indonesia, and Malaysia—as well as those who work in Cambodian factories—have returned home en masse after losing their jobs. The government announced an economic stimulus plan three months ago, but the much-needed financial reprieve promised to farmers and factory workers has yet to materialize.

The response to the virus itself has also been relatively minimal. Travel between provinces was banned in mid-April for the week of Khmer New Year, though there was scant enforcement. The country had little in the way of a lockdown and few social distancing requirements. Over the past three months, doctors and community leaders have participated in coronavirus health seminars. These workshops offered education on how to practice safe hygiene, collect biological samples for testing, and assess high-risk individuals for quarantine. Free hand sanitizer and surgical masks have been distributed in low-income communities. But these efforts have hardly reached across the country—and Cambodia’s low caseload appears to have come less from response than from luck. Today, the country boasts one of the smallest outbreaks in the world. Just 126 cases have been confirmed, and no deaths, though testing remains limited. 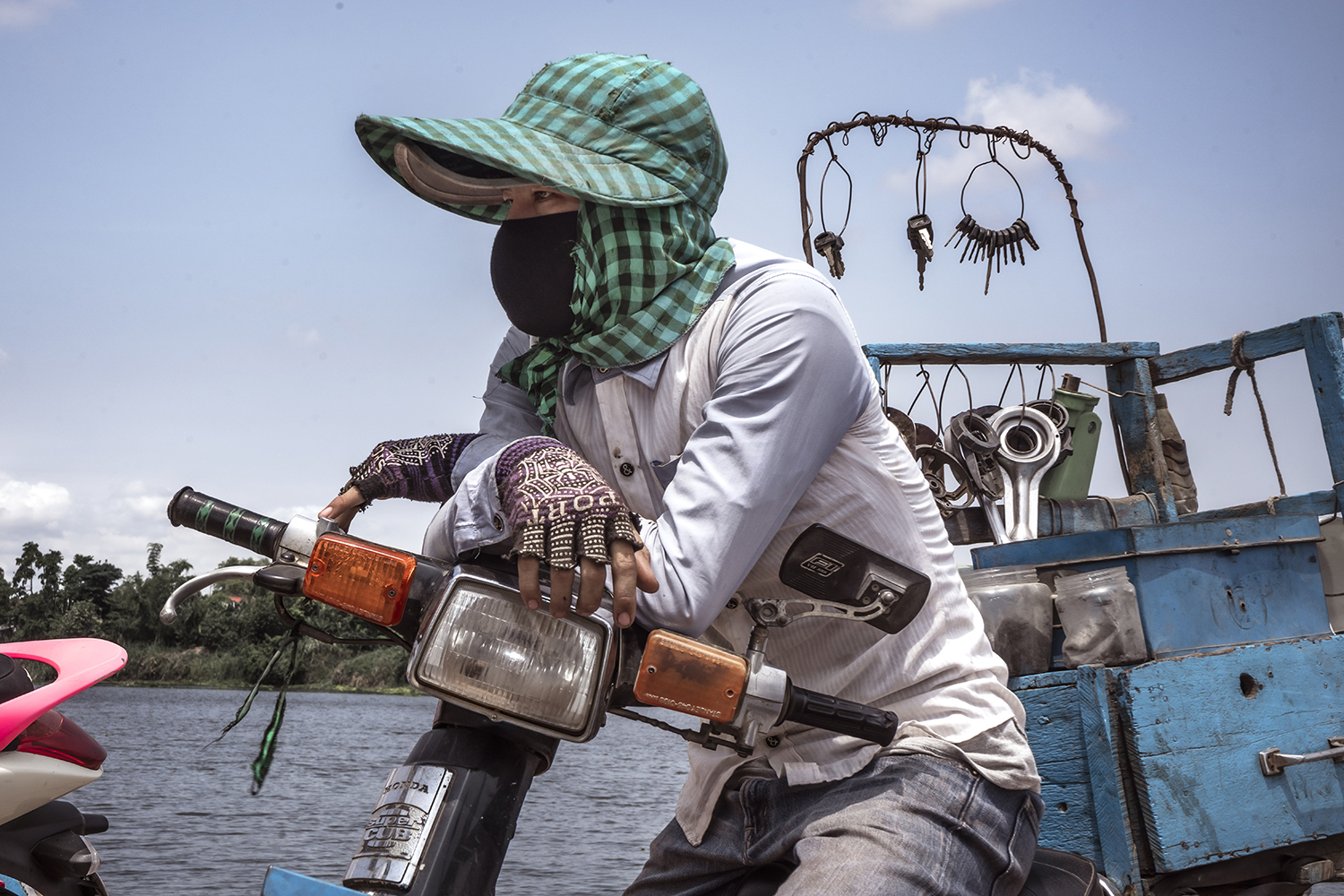 A man wears a face mask as he crosses the river to the island of Kaoh Khsach Tonlea on May 11. Jade Sacker for Foreign Policy 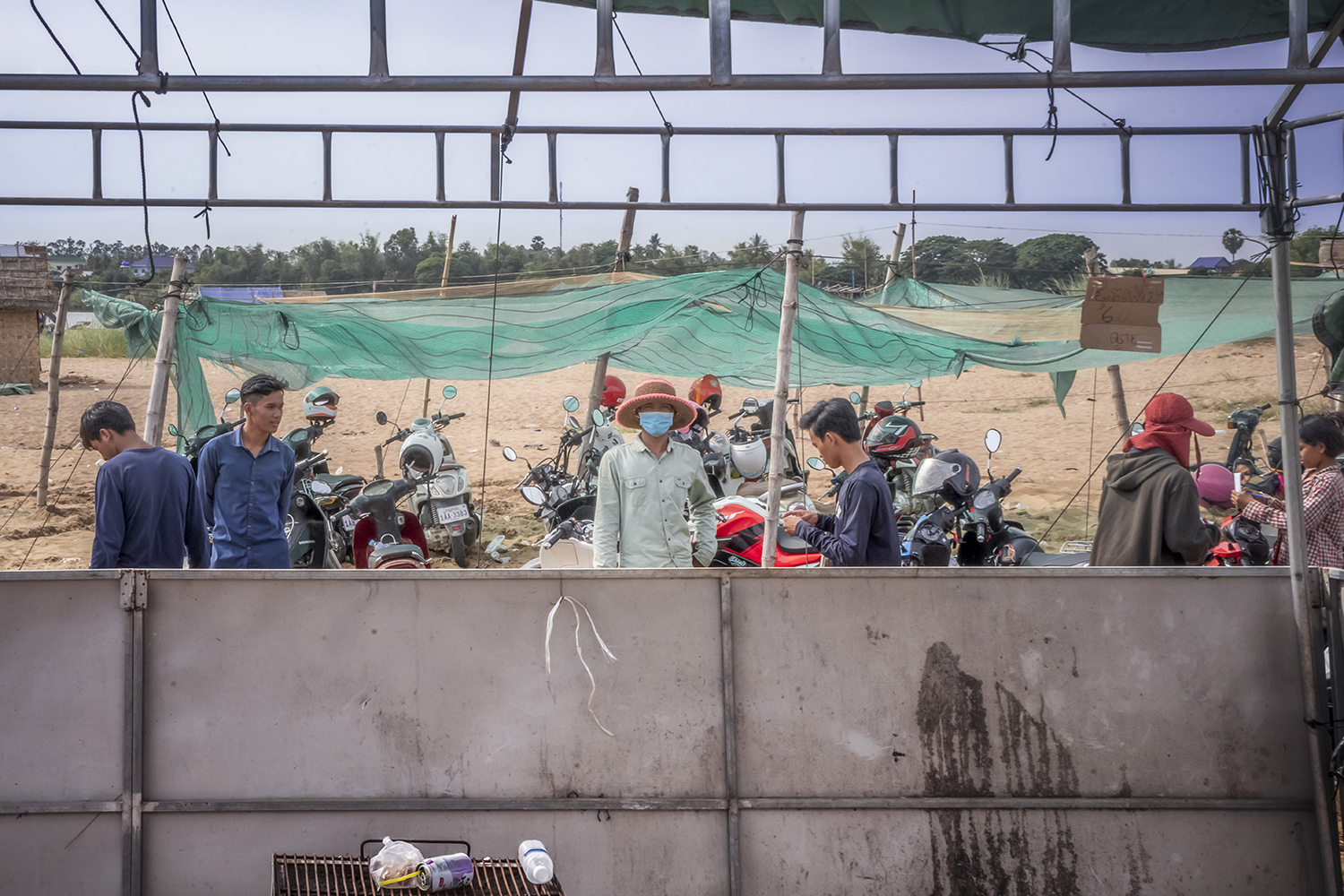 People gather on the beach of Kaoh Khsach Tonlea, a tourist destination popular with youth, on May 11. Jade Sacker for Foreign Policy

Cambodia’s success has been attributed to everything from its young population to stronger immune systems to the ubiquity of an older tuberculosis vaccination. But in rural areas, residents have taken their own precautions—leading campaigns of solidarity and strength in places where public health efforts are all but nonexistent and the government is insufficient or untrusted. Little information about the coronavirus has made it to rural provinces, and what has is mostly disseminated in the form of Facebook posts or word of mouth. In response, communities have searched for answers and safety with methods ranging from the strictly clinical to zealously divine.

Although Cambodia is a majority-Theravada Buddhist nation, there is a broad range of diversity among minority belief systems, including elements of animism, Hinduism, Islam, and Christianity. Each has a unique interpretation of the novel coronavirus’s genesis, why the pandemic came into being, and the toll it will take on the world—reflecting not only fears about the pandemic, but also other worries in turbulent times.

A 91-year-old Buddhist nun, Prum Rith, who has lived in monasteries since the age of 26, claims she has known of this invisible enemy for 20 years. She refers to the battle against the coronavirus as a second Cold War. From the summit of her hilltop pagoda in central Kampong Speu province, she urges visitors to protect themselves with masks and social distancing and prays every few hours through the night and day for the lives of her people and the welfare of humanity as a whole. She foretells that Cambodia’s Buddhist faith will mitigate the danger. 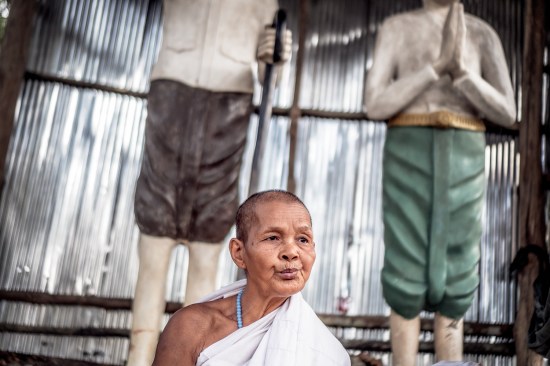 Prum Rith, a 91-year-old Buddhist nun, sits in her Phnom Srang pagoda in central Kampong Speu province on April 6. She has lived in monasteries since she was 26. Jade Sacker for Foreign Policy 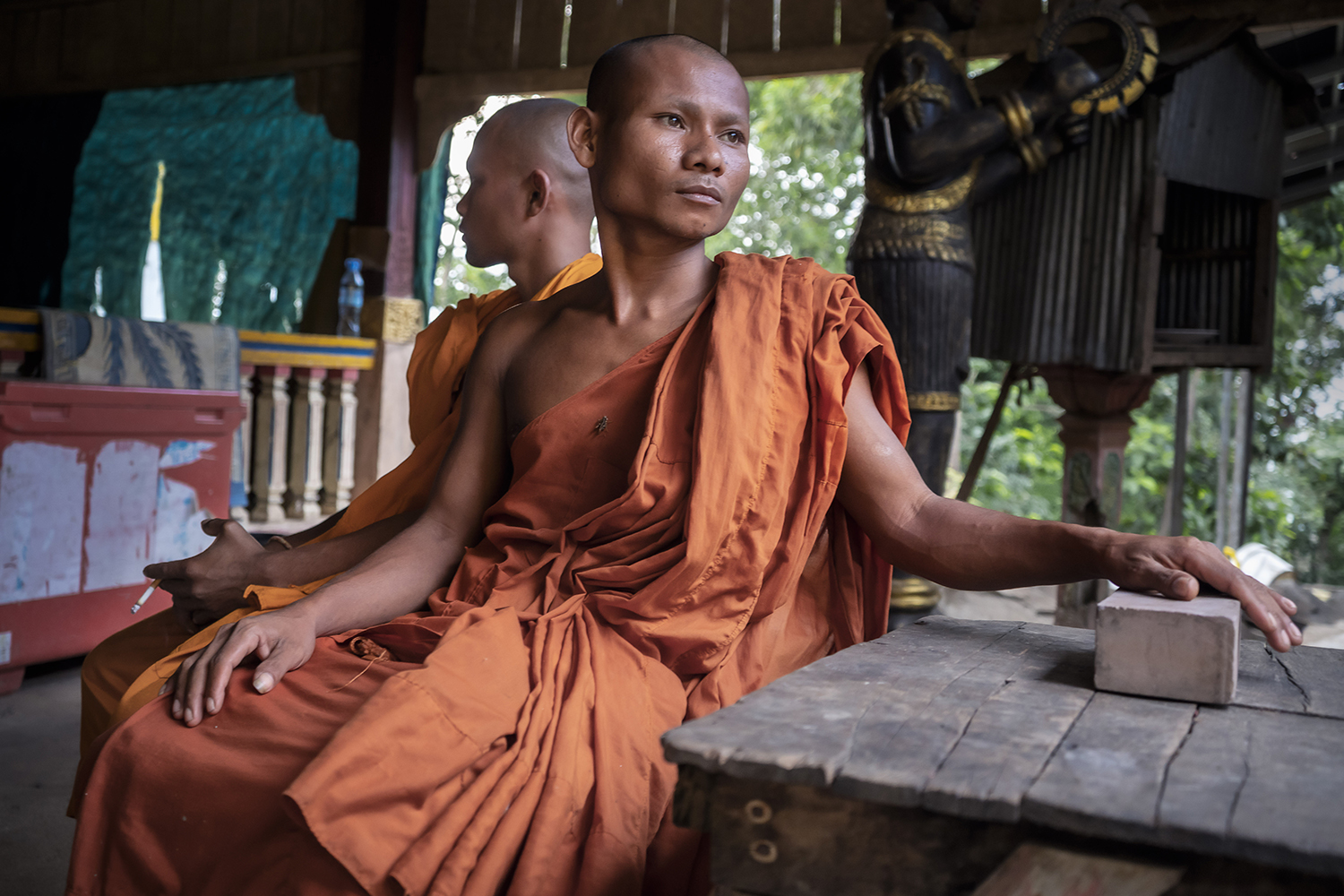 Two monks rest at a monastery on top of Phnom Srang on May 14. Jade Sacker for Foreign Policy 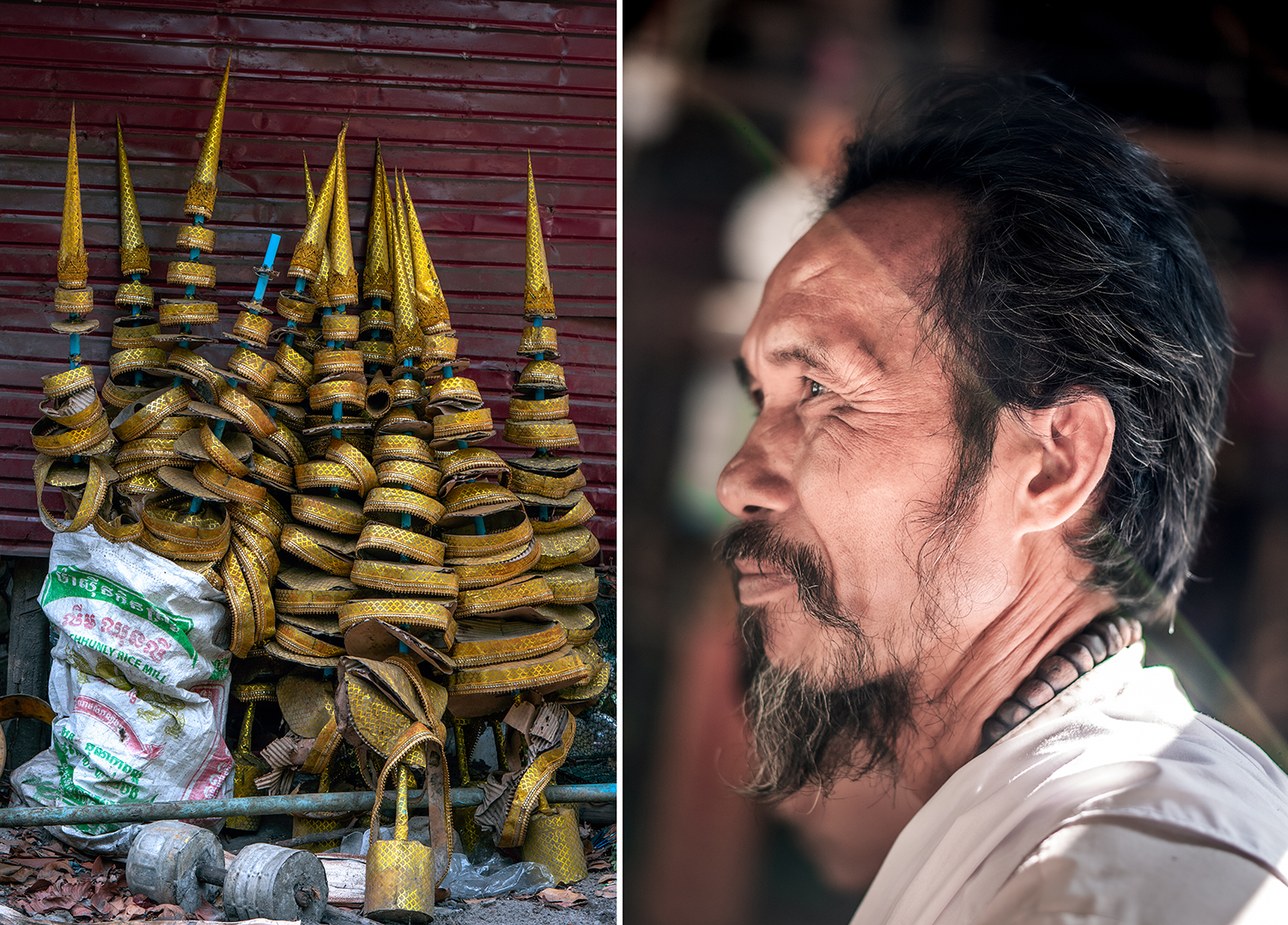 In photographs taken on April 8, decorations are propped up at a monastery on Phnom Kulen, a holy site in Siem Reap province, where Kheng Prum, right, says he has lived for “many lifetimes.” Prum, 47, is a Ta Bos monk who attributes the relatively low mortality rate in Cambodia to its karma-conscious society. Jade Sacker for Foreign Policy

Kheng Prum, a monk who says he has lived in a monastery on Phnom Kulen, a mountain near Angkor Wat, for “many lifetimes,” understands the effects of COVID-19 to be a reflection of karma on both an individual and societal scale. A follower of both the Buddha and Preah Prum, a Hindu god believed to have created the elements, Prum fears the world has lost touch with the values that determine humans’ reincarnation and relationship to the gods. Cambodia, he said, will experience only a minor impact from the coronavirus compared to other countries. Prum attributes the relatively low mortality rate to Cambodia’s karma-conscious society.

While strengthened prayer and karma provide the foundation of these communities’ coronavirus response, their spiritual leaders suggest heightened measures one can take to achieve safety and relief. 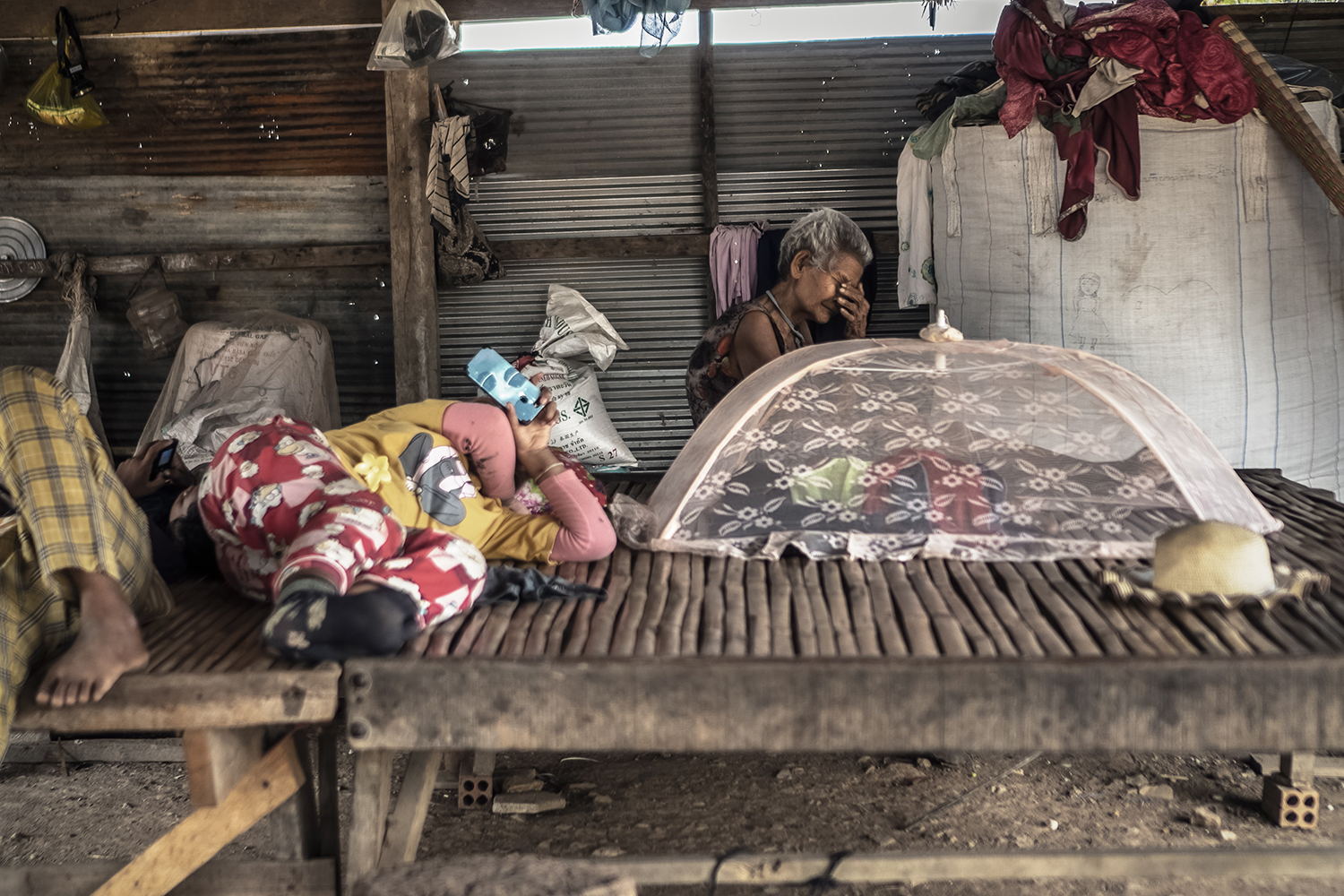 Chey To, the 89-year-old mother of Tom Chhea, seated behind her, lies down in her home as a reprieve from the afternoon sun in Kampong Speu province at the base of Mount Kirirom on May 13, while her great-grandchild sleeps under a mosquito net. 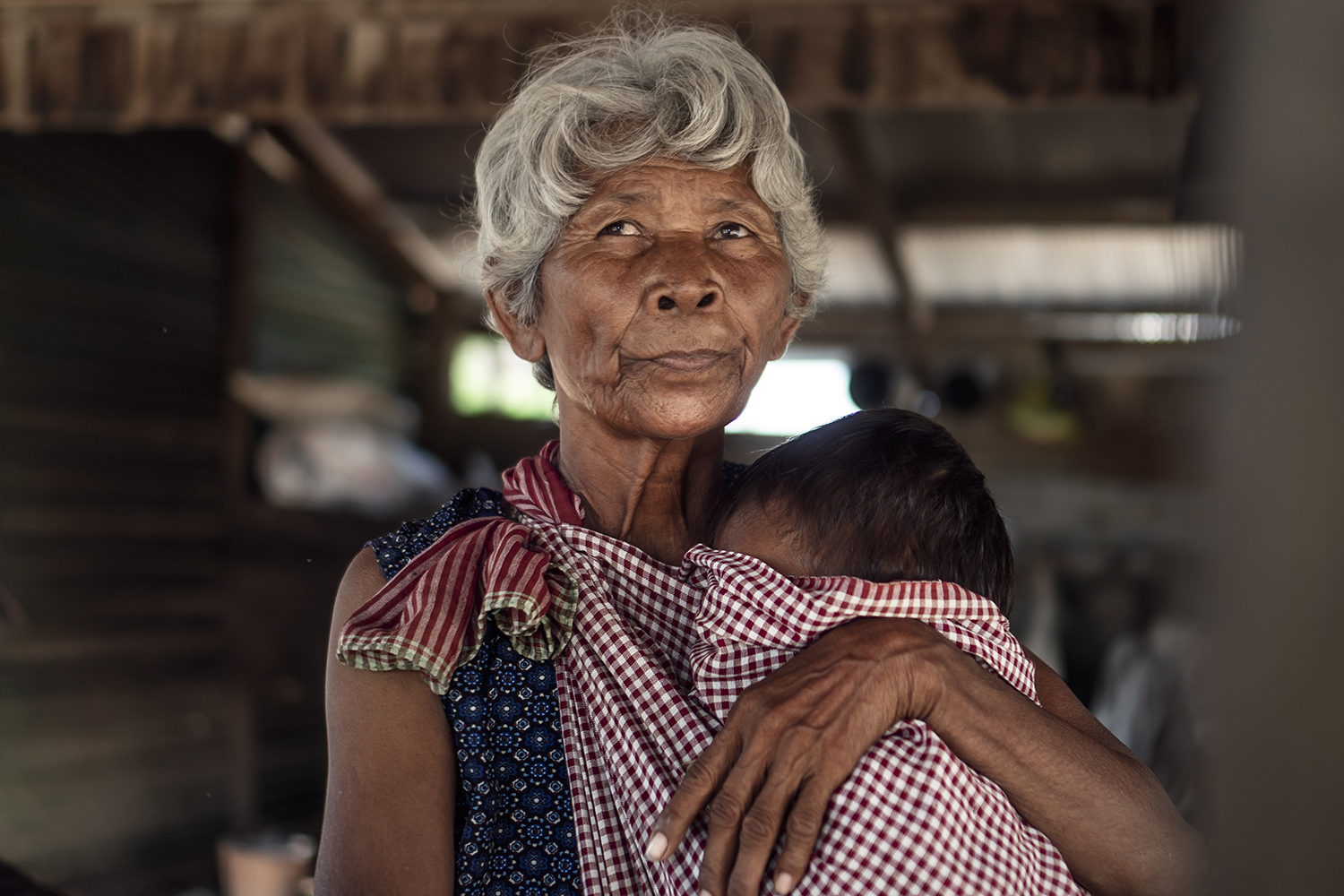 Chhea, 73, holds her grandchild on May 13. Chhea was one of 60 elders who held a sacrificial ceremony in March asking the spirits of her village and mountain to protect their indigenous Souy community from COVID-19. Jade Sacker for Foreign Policy

Tom Chhea, 73, is an elder in her indigenous Souy community, which inhabits the base of Mount Kirirom in Kampong Speu. In March, she and scores of Souy elders held an elaborate sacrificial ceremony honoring Lo Ngaev and Sre Ku, the spirits of her village and mountain, to ask for protection from COVID-19. The elders hiked nearly a day to the sacred location, where they prayed for their community and way of life—which once faced mortal extermination at the hands of the Khmer Rouge, and whose livelihood has been degraded by the government’s seizure of their native land, later sold to Chinese developers. Today, indigenous Souy youth, including Chhea’s grandchildren, must travel two hours every day to work at a garment factory in Chbar Mon. During the ceremony, the elders asked that their children and grandchildren be protected wherever they go, including in their crowded factory, which has remained in operation throughout the pandemic.

On the outskirts of Kampong Speu lives Kru Choeun, a traditional healer known as a “Kru Khmer.” Traditional Cambodian sorcerers are revered and sometimes feared as spiritual leaders capable of practicing shamanism, performing exorcisms, and divining the future. Choeun often offers water blessings and talismans to those who come to him for protection from evil spirits. The most potent shield, he says, is carved from soft metal, mixing Sanskrit writing with geometric designs. It is meant to protect those who wear it in the form of a bracelet or belt from attacks from all sides. 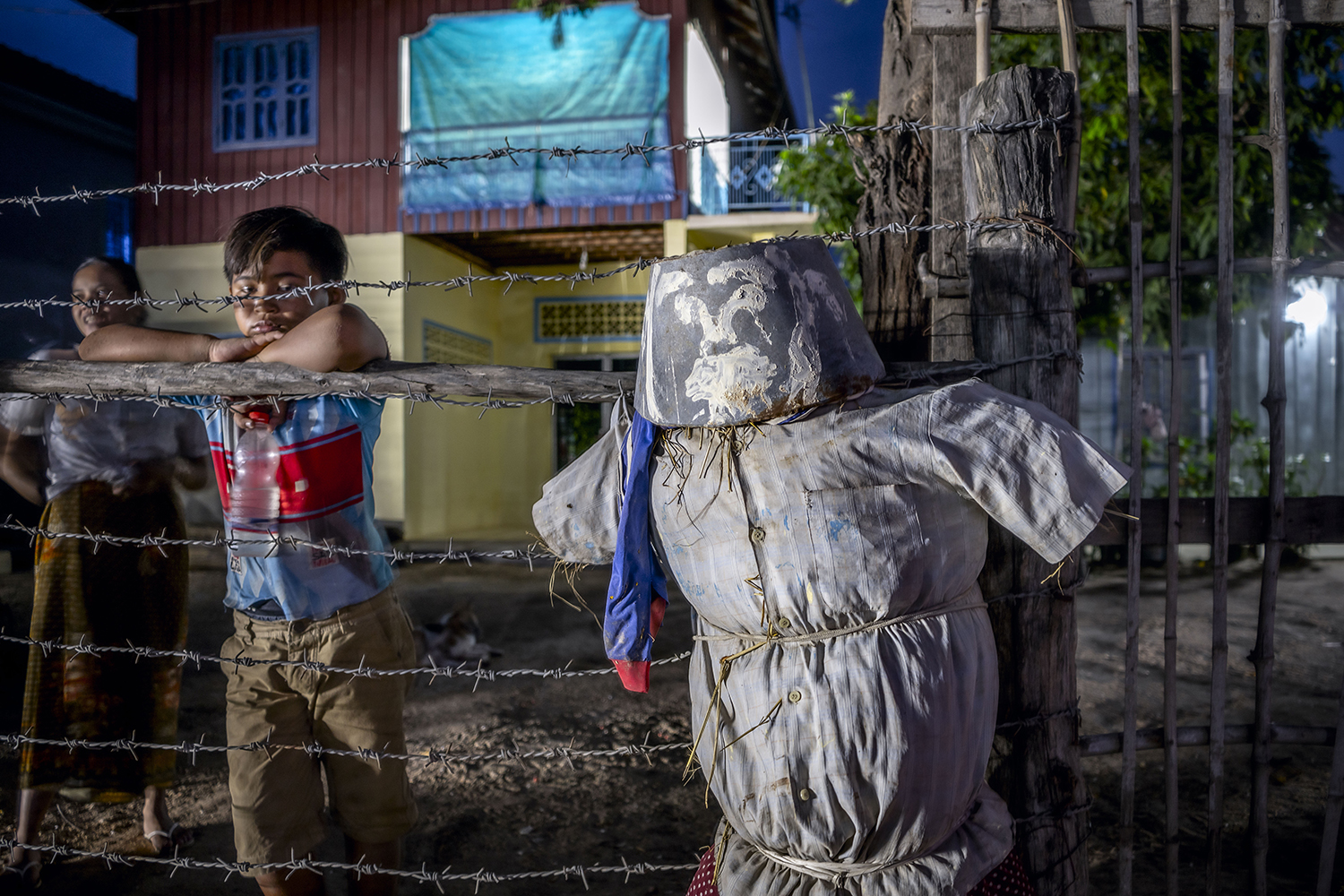 A boy stands next to the scarecrow he made for his family near Toul Svay, Phnom Penh province, on May 11. Jade Sacker for Foreign Policy

Choeun does not claim to know why the coronavirus arrived, but he advocates for a balance of spiritual and medicinal treatment. Most illnesses are physical ailments caused by spiritual torment, he says, and if one has weak karma, they will be more vulnerable to ill-intended spirits. When it comes to a disease like the coronavirus, Choeun believes treatment must be performed in a deeper resonance than a traditional doctor can provide. One needs spiritual blessings and guidance on how best to live in accordance with the dharma, he says—one needs to fortify their soul.

As the coronavirus has eased—Cambodia has reported just two new cases in the past two weeks—the army of scarecrows remains. The cornerstone of Cambodia’s economy is garment factories, which have been decimated by disruptions to global supply chains. The shuttering of international travel has gutted Cambodia’s critical tourism sector. These economic shocks, in turn, threaten entire rural communities deeply dependent on remittances. Many Cambodians believe faith helped battle the pandemic, but whether it can help with the coming blow remains to be seen.

Hun Sen needs somebody to blame for the impending disaster.

In Southeast Asia, the coronavirus pandemic has provided a handy excuse for a clampdown on free speech.

Jade Sacker is a photojournalist based in New York City.