The Legacy of American Racism at Home and Abroad

Domestic racism has long impacted U.S. foreign policy. It’s time to open up about it.

It used to be that Americans had to wait decades to learn how U.S. national security professionals viewed racism within the United States. Only declassified reports and personal memoirs revealed how senior officials and diplomats condemned segregation, inequality, and racial injustice in their own country. Many of them saw the evils of racism as an affront to U.S. values and an impediment to the country’s foreign-policy goals, especially in sub-Saharan Africa. They delivered their points directly or indirectly—in situation rooms, policy debates, and briefings. These critiques, however, were rarely offered publicly or directly to Americans. It was inappropriate, many believed, for foreign-policy specialists to discuss domestic issues. This artificial divide between the professional and personal sidelined some of our sharpest foreign-policy minds from addressing systematic racism in America.

The national uproar over the killing of George Floyd may finally tear down the wall between the personal and professional. Over the past two weeks, numerous U.S. diplomats of different races have said exactly what they think. The U.S. ambassador to Zimbabwe recalled that “as an African American … I have known that my rights and my body were not fully my own,” while the chief of mission in Eritrea reaffirmed that “George Floyd and Eric Garner and Michael Brown and Freddie Gray and Trayvon Martin and too many other young black men should be alive today.”

If the United States is going to heal its society and remain a source of inspiration abroad, it has to publicly and openly embrace self-criticism. Foreign-policy practitioners have to do what was once rare: use their platforms to speak to the American people and audiences abroad about racism and change the way the foreign-policy community operates.

Domestic racism has long undermined U.S. foreign policy. With the civil rights movement coinciding with the dawn of independence in sub-Saharan Africa, national security officials swiftly labeled segregation and racism as threats to U.S. foreign policy toward the region. As the public was to learn years later, U.S. President Dwight D. Eisenhower’s secretary of state, John Foster Dulles, noted that the situation in Little Rock, Arkansas, was “ruining our foreign policy. The effect of this in Asia and Africa will be worse for us than Hungary was for the Russians.” Officials in John F. Kennedy’s administration were even more forthright: Kennedy adviser (and, later, a senator from Pennsylvania) Harris Wofford advised that racial justice at home would “do more good in promoting good relations with Africa than anything else we can do.” It was infrequent when these sentiments were shared publicly, though Kennedy’s assistant secretary of state for African affairs (and former governor of Michigan), G. Mennen “Soapy” Williams, denounced racism as a “blight on America” in a speech at the University of Oklahoma.

This viewpoint reverberated through subsequent administrations. President Lyndon B. Johnson’s U.S. Information Agency director Carl Rowan shared in a memo that although African reactions to the Civil Rights Act were highly favorable, “some evidence exists of an increasing impatience with what is regarded as the lagging eradication of racial discrimination in the United States.” In a 1973 memo, U.S. Assistant Secretary of State for African Affairs David Newsom argued that “our credibility on moral questions of racial equality is challenged.” Perhaps it is no wonder that U.S. Secretary of State Henry Kissinger later trashed the Africa bureau staff in a memoir for “casting themselves as the defenders of American idealism.”

While the historical record is replete with foreign-policy professionals talking about race and racism in the United States within the corridors of power, few of those discussions took place in the public square. Apart from a few speeches at universities and with civil rights leaders and interest groups, U.S. diplomats and other officials shirked from sharing their personal views in real time and in public settings. 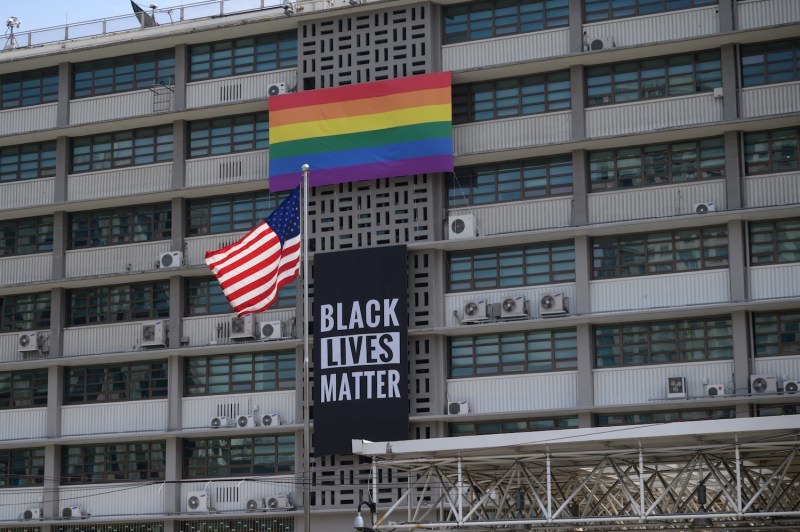 The U.S. Embassy in South Korea expressed its support for the Black Lives Matter movement with a large banner outside its building on June 14 as anti-racism protests sweep America and the world following the death of George Floyd. ED JONES/AFP via Getty Images

Such silence and disengagement is a luxury not afforded to all. The two authors of this piece have long backgrounds in foreign policy—in international nongovernmental organizations, the United Nations, the intelligence community, and the National Security Council. But as a white man and an African American man, our experiences grappling with the impact of racism and our role in combatting it couldn’t be more different.

As a white man, I see echoes of how policymakers grapple with racial discrimination in my own life. I know how easy it is to cite professional reasons to stay silent about racism. With family and friends, it can be easy to talk about racism’s vile legacy in America. But at work? On a dais? Foreign-policy specialists, I contend, do not have a remit for domestic issues. While discussing social issues is not a violation of the Hatch Act, which prohibits most employees of the executive branch from engaging in many political activities, when I was in government, it was convenient to lean into the act. After all, what does it mean to use one’s official title or position to talk about social issues, such as police brutality and racial discrimination? Even if speaking about racism isn’t necessarily political activity, didn’t I need permission? Such conversations required taking a stand, being counted, and opposing the system. That seemed pretty risky, and, as a rule, government bureaucrats don’t like risk.

As an African American man working in foreign policy, meanwhile, it is impossible for me to ignore the connections and contradictions between U.S. domestic and foreign policy. I stand in a place that would be familiar to generations of my forebears—faced with the prospect of advocating for rights and freedoms abroad that we have yet to fully achieve or enjoy at home. My family has been in America since at least 1827. Of the eight generations it has produced in those nearly 200 years, I am of the first to be born with the full rights of citizenship.

It strains credulity that they could display such passion and acuity for police abuses against Africans in Harare, Lagos, and Nairobi, yet be so deliberately obtuse to the same injustices faced by African Americans in Baltimore, Ferguson, or Minneapolis. It has been difficult to square the United States’ image as the global standard-bearer for human rights, individual freedoms, and democratic governance with recent images of militarized police forces and armored vehicles taking to U.S. streets; of peaceful protesters being met with rubber bullets, tear gas, and batons; and of senior government officials in the legislative and executive branches calling for us to “send in the troops” and “dominate the battlespace,” by which they mean the public square of towns and cities across the nation where citizens exercise their rights to assemble and protest.

I often encounter these biting contradictions in professional settings. Engaging with white counterparts on issues of governance, human rights, and conflict in Africa, I am just as likely to be struck by their silence to our domestic parallels with these challenges as I am by their insightful observations of what is happening abroad. It strains credulity that they could display such passion and acuity for police abuses against Africans in Harare, Lagos, and Nairobi, yet be so deliberately obtuse to the same injustices faced by African Americans in Baltimore, Ferguson, or Minneapolis.  As the writer and activist James Baldwin once said: “I can’t believe what you say, because I see what you do.”

More national security experts are running for Congress in 2020 than in most past elections.

There must be a break from past practices. Diplomats and foreign-policy leaders must raise their voices at home—and continue to keep them loud abroad in recognition of the inextricable linkages between the two. It has been encouraging to see U.S. embassies in Africa and elsewhere issue statements of condemnation for the killing of Floyd or hang Black Lives Matter banners outside their buildings. But these sentiments and gestures have to be backed by substantive policy change. They have to match the intensity and urgency of those on the streets demanding justice and accountability for those who have been killed, including Floyd, Breonna Taylor, and Ahmaud Arbery.

The measure of rhetorical commitments to equality will be in organizational actions to reexamine their hiring practices; promote staff diversity; address issues of salary equity; and rethink the composition of their boards and executive leadership. Foreign-policy specialists have a particular obligation to address issues of systemic racism and discrimination in the United States, and those who have been quiet for far too long must take responsibility for inaction or silence, rejecting excuses that professional activities are separate from personal views.

It is possible to contribute to the conversation and press for change, and it is necessary if U.S. diplomacy is to carry weight in Africa and elsewhere. Offering a platform for African and African American journalists, academics, and activists to comment on and condemn Floyd’s murder and police brutality is one way to start. Similarly, foreign-policy practitioners need to engage local communities at home and abroad. Local communities can speak to the ties between U.S. foreign policy in Africa and the persistence of racism in the United States. One of us has been teaching classes on U.S.-Africa policy at a local prison, bringing together these two strands for incarcerated citizens. This can be replicated outside of the United States, with diplomats speaking frankly about the inequalities of U.S. institutions, a recommitment to right historical wrongs, and how that will reshape American foreign policy.

In times of national crisis, Americans often hear political, civic, and business leaders decry, “We are better than this!” Now is the chance for the foreign-policy community to prove it.

Travis L. Adkins is a lecturer in African and Security Studies at Georgetown University and host of the On Africa Podcast

More national security experts are running for Congress in 2020 than in most past elections.