When Did Racism Become Solely a Domestic Issue?

International relations theorists once explored racism. What has the field lost by giving that up?

As Black Lives Matter protests spread around the globe, scholars of international relations are resurrecting difficult conversations about the detrimental ways in which the field has ignored race and racism. Those who study history and Africana studies have long shown how racism weaves through national and international affairs, knotting domestic and foreign policy at key junctures. Many IR experts, however, have carefully avoided reflecting on the role race plays in our field. If IR scholars hope to truly understand the current global turbulence, we must recognize that racism can’t be solely a domestic issue.

The exploration of race is hardly foreign to IR; up until World War II, the study of race and of IR were inexorably linked through a debate over imperial administration (in which colonies are governed in order to maintain the rule of a white and usually overseas elite over a nonwhite indigenous populace). Throughout the 20th century, Black intellectuals, organizations, and movements considered racism in the United States to be a global issue that demanded a similarly global solution. In the early 1900s, the African American sociologist W.E.B. Du Bois famously proposed the color line as the “relation of the darker to the lighter races of men in Asia and Africa, in America and the islands of the sea.” He viewed it as an analytical device with which to unpack the trajectory of U.S. development as part of a global power relations, even employing it as a tool to reexamine the international causes of World War I.

By the end of the next world war, domestic racism within the United States remained critical to understanding and shaping world affairs. In 1945, Metz Lochard, the Haitian-born editor in chief of the influential African American newspaper the Chicago Defender, proposed that: “The World Security Conference in San Francisco has but one meaning to the Negro people—that is, how far democratic principles shall be stretched to embrace the rights of our brothers in the colonies and to what extent the American Negro’s own security at home shall be guaranteed.”

Lochard’s hopes were widely shared. For many Black Americans the United Nations seemed to offer new avenues for redressing the racism that was endemic in the United States. At the end of 1948, the Convention on the Prevention and Punishment of the Crime of Genocide was unanimously adopted by the U.N. General Assembly. In 1951, a triad of left-leaning groups (the International Labor Defense, the National Negro Congress, and the National Federation for Constitutional Liberties) came together in Detroit to form the Civil Rights Congress. The organization documented cases of racial violence with a view to charging the United States with genocide at the Paris General Assembly of the U.N. 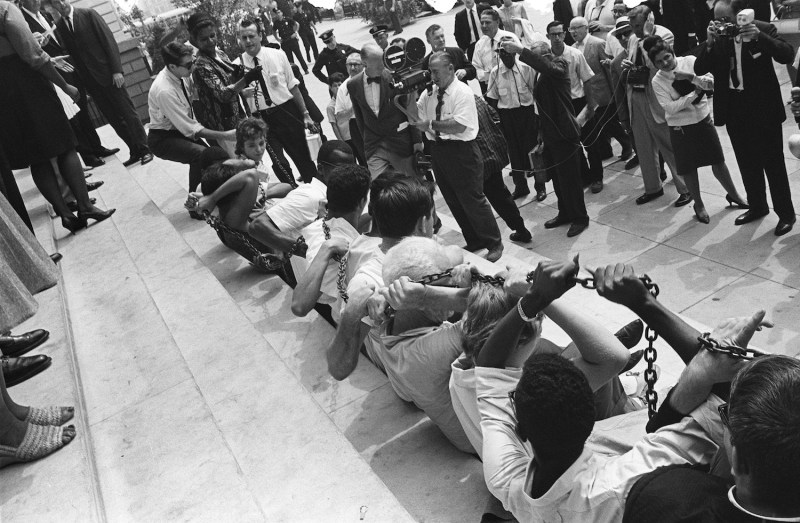 Protesters chain themselves and sit in front of the New York City Hall on Aug. 23, 1963, during a protest against racial segregation. AFP via Getty Images

The right was no less aware of the impact of domestic racism on U.S. international relations. During the same period, Frank E. Holman, a Rhodes scholar and president of the American Bar Association, argued that international human rights treaties would erode domestic liberties. Holman’s campaign focused the attention of Southern senators on the prospect that the Genocide Convention, if ratified by the United States, would act as a lever to force the enactment of federal anti-lynching legislation. (Such legislation remains unenacted today). These fears found their way into the Bricker Amendment, which sought to curtail the president’s constitutionally mandated treaty-making powers. The amendment was only narrowly defeated, but in 1953 President Dwight D. Eisenhower bowed to such pressures and effectively recused the United States from a leadership role in promoting human rights instruments. Washington then ratified no more international human rights treaties until 1977. And it did not ratify the Genocide Convention until 1988.

Part of the original purpose of the Organization of African Unity was to confront apartheid and its pernicious influence on the front-line states that bordered South Africa. In 1969, President Richard Nixon set U.S. foreign policy on a course of cooperation rather than confrontation with apartheid South Africa. That course changed direction only when Congress overrode President Ronald Reagan’s veto of the Comprehensive Anti-Apartheid Act in 1986. During this time period, apartheid became an increasingly important issue through which domestic and international concerns for racism conjoined.

None of this happened in the absence of grassroots organizing. Indeed, the 1980s anti-apartheid movement is, in at least some way, a continuation—or afterlife—of the 1950s and 1960s civil rights movement (also called the “Freedom Movement” by many of its proponents). Take, for instance, Ella Baker, a critically important organizer in the Student Nonviolent Coordinating Committee and a keen advocate for voting rights. Baker took up the anti-apartheid cause in the 1970s. Or consider Angela Davis, who provides a direct and living connection between the older Freedom Movement and the more recent Movement for Black Lives. In 1984, Davis supported the International Longshore and Warehouse Union in San Francisco as its members refused to unload South African cargo for 11 days. It is iconic, to say the least, that on Juneteenth 2020, the ILWU once again shut down the port, this time to protest homegrown police violence and racism, with Davis once again lending support to the effort.

By the mid-1980s, the anti-apartheid movement was increasingly led by students, notably Black students. In 1988, Barbara Ransby, a University of Michigan graduate, founded the Ella Baker-Nelson Mandela Center for Anti-Racist Education. The center sought to link the anti-apartheid struggle to U.S. struggles that arose out of what Ruth Wilson Gilmore has described as the “organized abandonment” of poor and Black neighborhoods at the city and municipal level. Over the years, organizers increasingly fixed their attention on the resurgence of police violence against Americans of color.

While the roots of the Movement for Black Lives are multiple and braided, they at least partially track what Du Bois understood to be the global color line. In the United States, Cold War and post-Cold War geopolitics have brought counterinsurgency strategies and militarized policing home to U.S. citizens—especially poor and the Black citizens. Understanding such connections will make for a richer field of international relations, and there are resources waiting in history and Africana studies. It is not that domestic issues—or perhaps more accurately city or neighborhood issues—are less important when it comes to examining the lived experience of racism and the political struggles that ensue. But what is clear is that racism should be conceived as both a domestic and a foreign-policy issue. IR scholars must take notice if they wish to adequately prepare their students for this new juncture in the life of the nation.

Robbie Shilliam is a professor of international relations at Johns Hopkins University. He is author of Race and the Undeserving Poor: From Abolition to Brexit and co-editor with Olivia Rutazibwa of The Routledge Handbook of Postcolonial Politics.

Why Race Matters in International Relations

Western dominance and white privilege permeate the field. It’s time to change that.

The Legacy of American Racism at Home and Abroad

Domestic racism has long impacted U.S. foreign policy. It’s time to open up about it.

Race and reconciliation lessons from a Black international peace builder